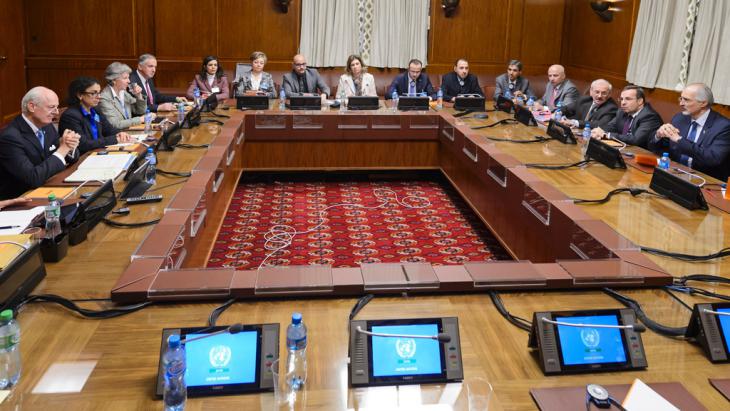 As the Geneva III peace talks get underway, there is no sign that the conference will secure an end to the violence in Syria. The Assad regime can participate safe in the knowledge that it has nothing to fear. A commentary by Bente Scheller

Turkey says the Kurdish Democratic Union Party should not be invited. The Russians insist upon it. The opposition has shown up, but wants to boycott the negotiations as long as the regime maintains its starvation blockades. The US insists that there should be no preconditions for the talks. Only one side appears to be perfectly happy as the Geneva III cautiously begins: the Syrian regime.

This tells us all we need to know about the prospect of a successful outcome to negotiations.

The nations that have called on Assad to stand down are still not ready to enforce this demand. As for his allies Russia and Iran, their involvement is not only diplomatic, but also more blatantly military in nature, in a bid to ensure that he remains in office.

Assad's strategy is to drag things out. He plays the part of the golden guy, declaring his willingness to negotiate. But while on an international level, the Vienna Process and the conference in Riyadh – at which key opposition representatives and rebel groups agreed on a political solution to the conflict – were regarded as steps towards a diplomatic solution, Damascus is attempting to sabotage the process with violence.

The coalition had barely been established when the Syrian regime arrested – albeit briefly – two prominent opposition figures as they travelled to Saudi Arabia for talks and boasted that it had killed Zahran Alloush, leader of the most important rebel group in the region around Damascus, in an air attack.

Starvation as a weapon of war 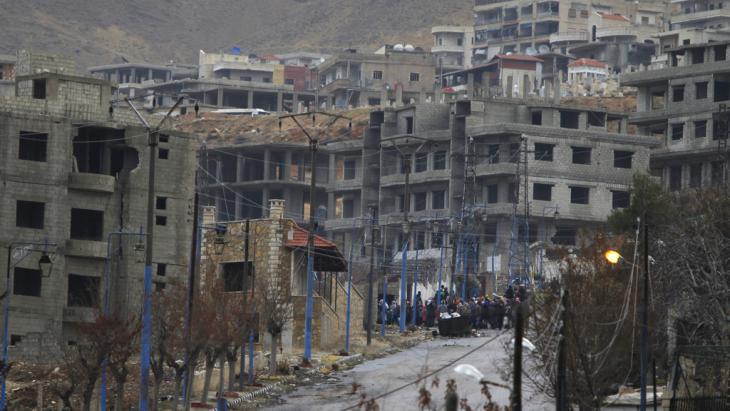 Starving behind the frontlines: People continue to die as a consequence of malnutrition in the besieged Syrian city of Madaya. Despite emergency aid delivered three weeks ago to thousands of people in need, the Syrian Observatory for Human Rights recently reported that at least 18 people have died since mid-January. According to current UN estimates, 400,000 people urgently require humanitarian aid in a total of 15 besieged towns and cities. The UN says 6.7 million Syrian children are in need of humanitarian assistance, including in Madaya, Kafraya and Foah

The Syrian and Russian air forces continue their bombardments, which have not been scaled down in any way – attacks that are rarely aimed at IS, and much more often target other rebel groups and civilian infrastructure such as schools and hospitals. The besieging of dozens of small towns and villages is again a strategic focal point – a strategy that was also applied in 2013 in the run-up to Geneva II. Back then, sights had been set on the Damascus suburb of Mouadhamiya as well as Arbin and Yarmouk. Today it is in Madaya, among other places, where the regime has exacerbated the humanitarian situation beyond all comprehension.

Rebels are also besieging towns and villages, but no one is doing this as mercilessly as the Syrian regime. In view of the devastating situation, the UN Secretary General Ban Ki Moon warned recently: "Starvation as a weapon is a war crime."

In a bid to change the agenda of the Geneva talks, the Syrian state is killing and endangering the civilians it is actually obliged to protect under international law. In this way, Damascus increases the number of items on the agenda in order to be able to make concessions, without having to surrender any aspects of its genuine interests.

This cynical game is also being played by the United Nations. Just last week, the media company Buzzfeed published the edits Damascus made to the UN's latest "Humanitarian Response Plan". Regime representatives consistently deleted the formulation "besieged areas" and replaced it with gentler formulations, blanked out mine clearance and other issues unpalatable to the regime and played down the dramatic situation.

Last year, the UN sought permission from the government in Damascus for 91 shipments of aid. The regime did not even agree in principle to a third of those, and in the end, only 13 were actually carried out.

Humanitarian access to all areas, the release of political prisoners, an end to the bombardment of civilian infrastructure, and to the use of barrel bombs and chlorine gas – in a series of resolutions, members of the UN Security Council including Russia have agreed to all these things. But there has so far been no indication at all that any efforts are being made to enforce these demands. 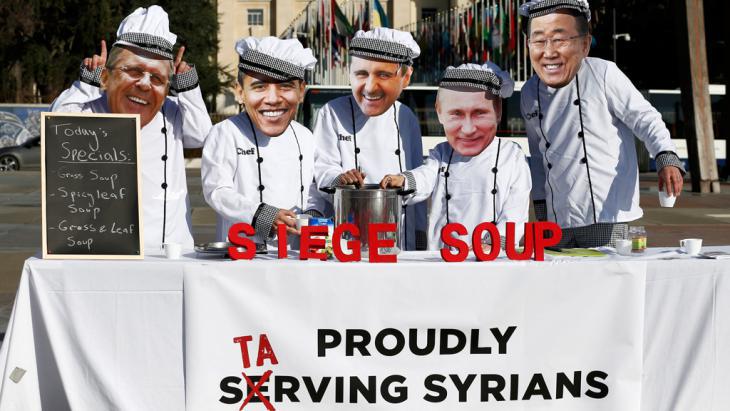 Geneva’s farcical Syria negotiations: "the conferences are the simulation of a process, rather than a real attempt to reach agreement. The meetings are a simply way of generating public interest and media headlines, a substitution for actually doing something," opines Bente Scheller

In this respect it appears grotesque if the international community now reproaches the opposition for putting up " pre-conditions", when these simply list the same demands that the Security Council should have tackled itself a long while back. Lifting the food and aid blockades, ensuring humanitarian supplies are getting through and ending air strikes on civilians – this is a humanitarian necessity, not something that should be haggled over.

A peace process in Syria under the aegis of the UN – as envisaged in Vienna – requires a robust and credible UN. It is therefore high time that the organisation's most powerful members finally follow up their words with actions. Even if nothing is being done to push forward with these questions, issues that they have been able to agree on: How should the UN play a key role in the much trickier question of a power handover in Syria?

At the Geneva I talks in 2012, participants called for a concrete plan for this handover of power. Three years have now passed, without Russia and the rest of the world reaching agreement on whether, when and how Assad should stand down. The only new aspect of the current constellation is that Assad's ally Vladimir Putin is showing even more clearly how far he is prepared to go to defend his own interests. Experience here and in Ukraine has shown that he can expect little international resistance.

The UN can only be as strong as its member states allow. So not much can be expected in the case of Syria. If these talks are allowed to continue without any certainty that they will result in any significant changes, effectively this means the conferences are the simulation of a process, rather than a real attempt to reach agreement. The meetings are a simply way of generating public interest and media headlines, a substitution for actually doing something.

Assad and his allies are receiving a boost in their endeavours to militarily extinguish the opposition instead of finding a political solution. Whenever the international community finds its demands from Assad are falling on deaf ears, it goes into reverse and instead calls on the opposition to moderate its demands.

Consequently, the biggest danger is that Assad's opponents will be further weakened by the current negotiations, as there is no indication why they should come to the table at all.

Bente Scheller became the director of the Heinrich Boll Foundation in Beirut in 2012. She previously led the foundation's office in Afghanistan. Her book "The Wisdom of Syria's Waiting Game: Foreign Policy Under the Assads" was published in 2013.

Home
Print
Newsletter
More on this topic
IS: the winners and the losers: The time is ripe for Bashar and his croniesWestern involvement in Syria: Fewer bombs, not more!Chronicle of a war foretold: Redefining the "Syrian" conflict
Related Topics
Assad regime, Syrian Civil War, Syrian opposition, United Nations (UN)
All Topics

In the face of COVID-19, we need to admit the political mistakes of recent years and adjust our trajectory according to the compass of reality. People around the world – ... END_OF_DOCUMENT_TOKEN_TO_BE_REPLACED

Going by the official numbers, Turkey is doing well, especially in comparison to other countries. But does this impression correspond to the reality? There are significant reasons ... END_OF_DOCUMENT_TOKEN_TO_BE_REPLACED

As COVID-19 sweeps across the globe, it is forcing religions to adapt and take action to prevent infection. But experts warn against using the crisis to fuel conspiracy theories. ... END_OF_DOCUMENT_TOKEN_TO_BE_REPLACED

The parties at the centre of Germany's political landscape have often exhorted citizens to distance themselves from the right-wing AfD party. And yet, Europe's response to what is ... END_OF_DOCUMENT_TOKEN_TO_BE_REPLACED

The battle for Idlib is likely to be the last, bloody conflict in the Syrian war. Refugees have fled the city in droves, but Huda Khayti is determined to stay and fight for her ... END_OF_DOCUMENT_TOKEN_TO_BE_REPLACED

Why are predominantly Muslim countries lagging behind when it comes to democracy and human rights? Dutch sociologist Ruud Koopmans uses a lot of figures to underpin his theory ... END_OF_DOCUMENT_TOKEN_TO_BE_REPLACED
Author:
Bente Scheller
Date:
Mail:
Send via mail

END_OF_DOCUMENT_TOKEN_TO_BE_REPLACED
Social media
and networks
Subscribe to our
newsletter