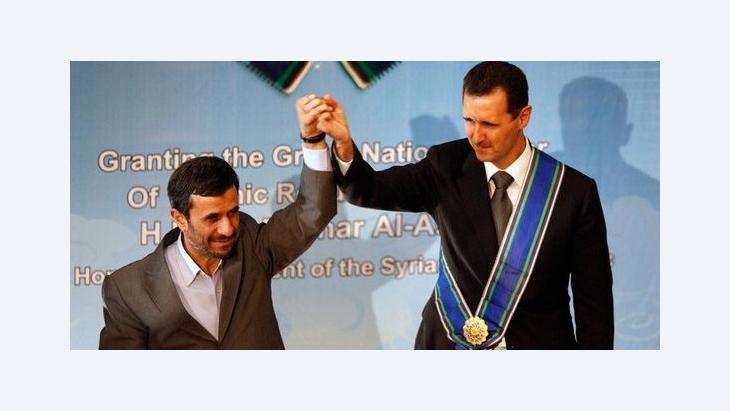 ﻿The leadership in Tehran is currently doing everything in its power to prop up the regime in Damascus. If Bashar al-Assad falls, Iran too will find itself dangerously isolated and is unlikely to be able to withstand the pressure of sanctions, says Bahman Nirumand

﻿The Islamic Republic is the only country that is still unconditionally backing Syria. Even Russia and China, which have so far rejected sanctions against Damascus, are gradually starting to reconsider their strategies.

Tehran had declared its willingness to support any peace plan on the table, but only on condition that Assad stayed in power. The alliance with the Assad regime seems to be so important for Iran that the Iranian deputy chief of staff, Brigadier General Masoud Jazayeri, declared that Iran would not permit "evil governments" like Saudi Arabia, Qatar or Turkey to force a change of regime in Damascus. Does this mean that Iran is even prepared to go to war for Assad?

The Islamic Republic has a great deal at stake. If the Assad regime falls, the whole structure that Iran has painstakingly been building up in recent years in the Middle East will disintegrate.

Religion is not the issue

The close relationship between Syria and Iran began shortly after Syrian independence in 1946 and has grown progressively more intense over the years. It should be noted that it was not religious, ethnic or cultural commonalities that led to this closeness, and certainly not political ones; rather, it was the enemies the two countries had in common. 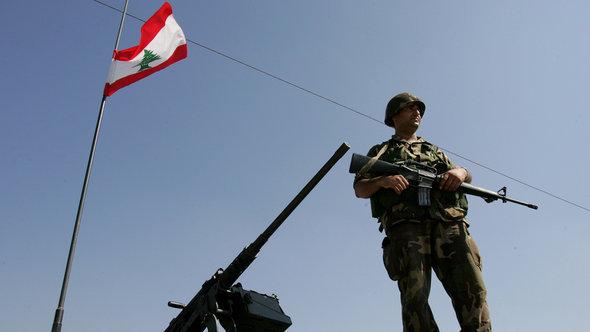 Aid for radical militias: With the help of Iran and Syria, Hezbollah rose to become the dominant political force in Lebanon. If Assad were to fall, this position of power would be permanently jeopardized

Syria is an Arab country with a Sunni majority. In Iran, on the other hand, it is the Shiites who are in the majority. Politically speaking, Syria is part of the Arab front against Israel, and during the Cold War it orientated itself towards Arab nationalism and socialism and the Soviet bloc. By contrast, until the Islamic Revolution Iran's relationship with Israel was a decidedly good one, and it was firmly embedded in the Western network of alliances. However, both countries were first and foremost enemies of the Ba'athists in Iraq.

When the Islamists assumed power in Iran, Israel too became a common enemy. From this point on the relationship between Syria and Iran began to acquire strategic importance for both sides, not least because the West, especially the United States, threatened both and treated them with hostility.

As a result, Syria was the only Arab country to support Iran during the Iran-Iraq war of 1980-1988. It blocked the transport of Iraqi oil through its territory and allowed Iran to station Revolutionary Guards on Syrian soil near the Lebanese border. In return, Iran exported around a billion dollars' worth of oil to Syria for free.

After the war, Syria and Iran intensified their economic and military relationship. Two years ago trade between the two countries was valued at five billion US dollars.

In 2006 the two states signed a military cooperation agreement, on both land and sea. In 2010 Iran built a modern radar control system in Syria that enabled Syria to observe Israeli rockets, thereby bolstering not just its own aerial security but also that of Lebanon and Iran. 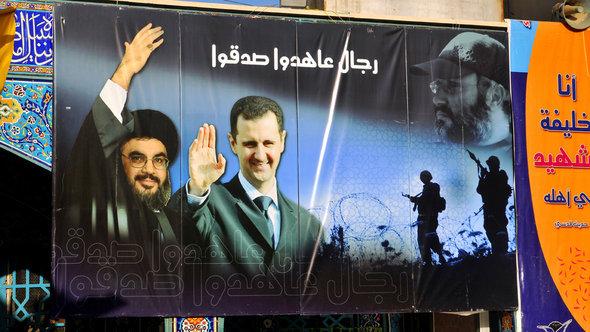 Just good friends: the Shiite Hezbollah and the Assad regime have been close allies for many years. Syria acts as a land bridge between Iran and Lebanon: weapons are transported across it to the militia

Syria has particular strategic importance for Iran because it acts as a bridge between the Islamic Republic and the people of the Arab states: in Lebanon and Palestine, and with respect to the Shiite minority in the Gulf States. In the 1980s Hezbollah was established in Lebanon by around 1,500 members of the Iranian Revolutionary Guard, who also trained its militias. Iran has continued to supply Hezbollah with money and arms ever since.

These days Hezbollah is the strongest power in Lebanon and is firmly allied with the Islamic Republic. Iran is also among those providing support for the two Palestinian organizations Hamas and Islamic Jihad.

Last but not least, Iran is seeking to increase its influence among the Shiite minorities in the Gulf States – particularly in Bahrain, where Shiites actually constitute the majority, but also in Saudi Arabia. Since the fall of Saddam Hussein and the Shiite takeover, Iraq too falls within Iran's sphere of influence. Iran has become a major power in the region.

Building a front against the 'Shiite axis'

This is precisely what is provoking the hostility of the Arab states, especially Saudi Arabia. The West also believes its interests in the Persian Gulf are being threatened. Alongside Israel, Saudi Arabia is now one of the West's most important partners in the region. Its response to the Iranian situation has been to increase its stockpile of weapons – something the United States, and Germany too, were only too happy to help with – and create a united front among the Gulf States to oppose their northern neighbour. 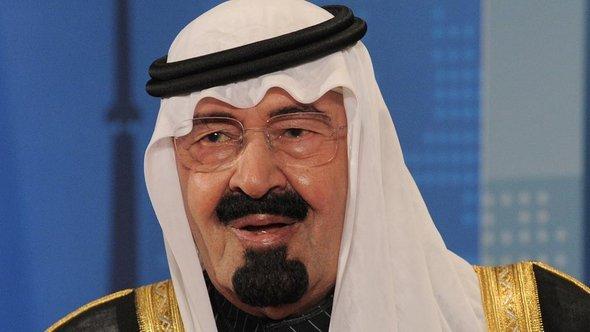 Iran's biggest opponent in the region: with the help of the West, Saudi Arabia is massively increasing its stockpile of weapons so that, with the other Gulf States, it can act as a counterweight to Iran. Pictured: Saudi's King Abdullah

References were made to a 'Shiite axis', which was now opposed by a Sunni one. In Lebanon the Saudis are trying to draw Hezbollah onto their side, and in Iraq Sunnis are being supplied with weapons with which to fight against the Shiites, while Shiite unrest in the Gulf States is brutally suppressed, as, for example, in Bahrain last year.

Syria is now the biggest obstacle to the success of efforts to weaken and isolate Iran. No wonder the Saudis, along with Qatar, have been supplying the rebels in Syria with huge quantities of arms ever since the uprising began – as has Turkey, which believes it has glimpsed an opportunity amid the chaos to further its ambitions to become a major regional power. Neither these countries nor the West seem unduly worried by the fact that terrorist organizations of various stripes are among those fighting the regime.

Tehran is now doing everything in its power to prop up Bashar al-Assad, because if Assad falls, Iran too will find itself dangerously isolated, and is unlikely to be able to withstand the pressure of sanctions. It would also greatly facilitate a military attack on Iranian nuclear plants. However, entering into a war in Syria would be no less dangerous for Iran.

As things stand, it doesn't look as if Assad will succeed in suppressing the uprising in the short term. Iran is making plans for a long and gruelling civil war – like the civil war in Lebanon, which lasted for 15 years.

Bahman Nirumand, born in Tehran in 1936, is a writer and journalist living in Berlin. His autobiography "Weit entfernt von dem Ort, an dem ich sein müsste" ["Far Away from Where I Should Be"] was recently published by Rowohlt.

Home
Print
Newsletter
More on this topic
Abdullah Iskandar on the Damascus Bomb Attack: The Syrian Regime's Strategic FailureHezbollah and the Uprising in Syria: Can the ''Party of God'' Weather the Arab Spring?The Armenian-Syrian Musician Hrach Macoushian: ''It is Craziness to Support Assad!''
Related Topics
Arab Spring, Arabellion, Syrian Civil War
All Topics

Since Ali Khamenei, Iran's most powerful man, has openly and unconditionally come out in support of Putin's war in Ukraine, logistical help is on its way, with an allegedly ... END_OF_DOCUMENT_TOKEN_TO_BE_REPLACED

The Palestinian militant organisation Hamas, with Hezbollah's help, is building up a military presence in Lebanon, the ultimate consequences of which could be devastating, writes ... END_OF_DOCUMENT_TOKEN_TO_BE_REPLACED

In this essay, renowned Lebanese journalist and writer Hazem Saghieh asks whether the Arab Levant, which stretches from Iraq in the East to Egypt in the West, will remain an ... END_OF_DOCUMENT_TOKEN_TO_BE_REPLACED

Khaled Bahlawan hammers nails into a traditional wooden boat he built by hand, toiling under the scorching sun on Syria's Mediterranean coast to preserve a disappearing ancient ... END_OF_DOCUMENT_TOKEN_TO_BE_REPLACED

"Flugt" is the world's first museum dedicated to the stories of those forced to flee. The new museum, which focuses on the fates of refugees then and now, is housed in a former ... END_OF_DOCUMENT_TOKEN_TO_BE_REPLACED

"Finding Home", the second album by Syrian-born, UK-based musician Maya Youssef, works through feelings of loss and destruction until its music reaches a place beyond war and ... END_OF_DOCUMENT_TOKEN_TO_BE_REPLACED
Author:
Bahman Nirumand
Date:
Mail:
Send via mail

END_OF_DOCUMENT_TOKEN_TO_BE_REPLACED
Social media
and networks
Subscribe to our
newsletter