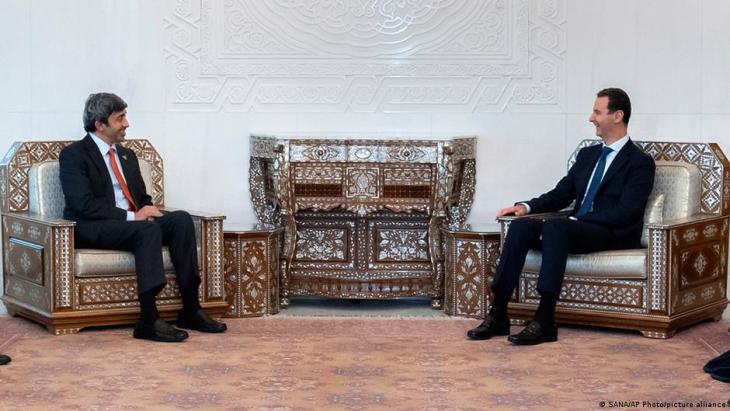 Syria and the Arab world
Assad's return to the fold

Despite Syria's lengthy civil war, dictator Bashar al-Assad is now being courted by many governments in the Middle East as if nothing ever happened. The reasons for this vary. By Thore Schroeder

What was most astonishing was the warmth displayed by the two men. Long hugs, friendly smiles, handshakes for the whole delegation. The Syrian dictator Bashar al-Assad seemed hardly able to believe his luck when the Emirati Foreign Minister Sheikh Abdullah bin Zayed al-Nahyan visited him in Damascus on 9 November. It was the highest-ranking visit from the United Arab Emirates (UAE) since the outbreak of the Syrian civil war in 2011. In fact, all Assad has had to do is wait for a rapprochement between his regime and a number of Arab states allied with the United States.

The Emirates reopened their embassy in the Syrian capital back in 2018. At the time, the official line was that the move was also intended to limit regional interference "in Arab, Syrian affairs" – a reference to Iran's influential role in the civil war country. During the latest visit, President Assad thanked the UAE for its "correct and objective positions" on Syria. Two days later, a deal was announced whereby an Emirati consortium will build a 300-megawatt solar power plant near Damascus in the coming years.

Assad has effectively won the war. It has long been clear that he would not have to give way. But the warlord needed investments from abroad to further secure his power, and not only for the completely ailing energy sector. After almost eleven years of conflict, Syria is on its knees.

Half the population has either fled abroad or been internally displaced, hundreds of thousands of Syrians have died in bombardments conducted by the regime and the Russian air force, while nine out of ten people live in poverty. The country remains divided, with Assad in control of only about two-thirds of the territory. A political-diplomatic solution is a long way off, a lifting of the crippling EU and U.S. sanctions seems highly unlikely.

If the Iranians and Russians are there, the Arabs should be there too

Against this backdrop, Abu Dhabi's motivation for seeking a rapprochement with the autocrat was already evident three years ago: you don't abandon the field to your Iranian enemies, Turkish rivals or even the Russians. "Syria should not be left to itself," Amjad Taha, an Emirati analyst, was recorded saying on Al-Arabiya television, "if the Iranians and the Russians are there, the Arabs should be there too." 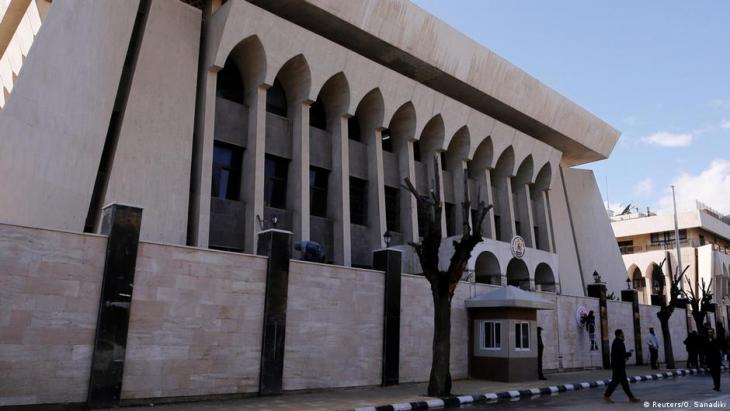 The United Arab Emirates (UAE) embassy in Damascus. It re-opened in the Syrian capital back in 2018. At the time, the official line was that the re-opening of the embassy was also intended to limit regional interference "in Arab, Syrian affairs" – a reference to Iran's influential role in the civil war country. During Emirati Foreign Minister Sheikh Abdullah bin Zayed al-Nahyan's visit to Damascus in November 2021, Assad thanked the UAE for its "correct and objective positions" on Syria. Two days later, a deal was announced whereby an Emirati consortium will build a 300-megawatt solar power plant near Damascus in the coming years

Ever since the fall of the economic hub of Aleppo in 2016, the UAE has realised that the rebel groups it was supporting had no chance against Assad's troops and his allies, especially Russia. The Emirati commitment to the Syrian opposition has since been written off as a lost investment. Even in Libya, for example, they are now on the same side as Bashar Al-Assad. Syria and the UAE both support the warlord Khalifa Haftar.

Increasingly open contact with the Assad regime also ties in well with the current trend where everyone in the region seems to be talking to everyone else. Israel has concluded peace agreements with a number of Arab states, including the UAE. Iran and Saudi Arabia are meeting in Baghdad. Negotiations to resume the nuclear deal with Tehran are also underway, albeit very haltingly.

All this is happening as the U.S. super-power continues its withdrawal from the region; or, at the very least, as Joe Biden's administration is unwilling to commit any significant political capital to Syria. Last but not least, the stringent withdrawal by the U.S. from Afghanistan has shaken Washington's credibility. State Department spokesman Ned Price made it clear after the Emirati minister's visit to Damascus that the US government is concerned about the meeting and "the signal it is sending". Efforts to normalise and rehabilitate Bashar al-Assad would not be supported. He is "a brutal dictator" who withholds humanitarian aid from large parts of his own population.

It remains to be seen whether the United States will apply the same strict sanctions regime imposed on Syria to its Arab partners. They could freeze the assets of those who trade with Damascus. Yet, the Americans themselves sowed doubt over their own resolve recently when they agreed to a deal supplying Egyptian gas to Lebanon via Jordan and Syria. The move is intended to cushion the collapse of the cedar state and push back Iran's influence there. The lucrative deal is one of the reasons why Jordan's King Abdullah II recently phoned Assad again after a decade of silence. 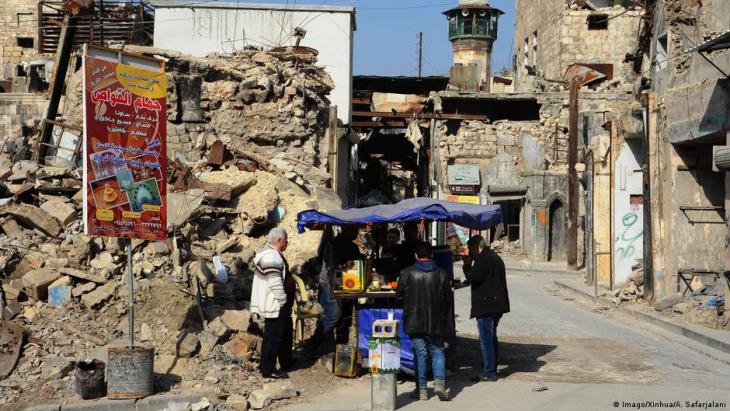 Ruins and rubble in Syria's former economic hub Aleppo: dictator Assad may have won the war, but he lacks the financial means to rebuild. "Assad may gain readmission to the Arab League and a rapprochement with neighbouring Arab states for a small price," says Andreas Reinicke, director of the German Orient Institute in Berlin, "but there will only be an end to sanctions and thus money for reconstruction if there is a political agreement." This requires, among other things, a new Syrian constitution, which is currently not in sight, says the former German ambassador to Damascus

Egypt wants to bring Syria back "into the Arab fold"

Economic interests are also motivating Cairo to work for Syria's re-integration. At the end of October, President Abdul Fattah al-Sisi spoke out in favour of respecting Syria's sovereignty with regard to Turkey's role in northern Syria. His foreign minister later declared that Egypt wanted to help "bring Syria back into the Arab fold". The Arab League said that Damascus could be readmitted at the group's next meeting if there was consensus. Secretary-General Ahmed Abul Gheit declared that "many Arab countries want this to happen". Only Qatar's foreign minister stressed earlier this week, "Qatar's position remains as it is. We see no serious steps by the Assad regime to repair the damage it has inflicted on its country and its people."

Last week, it was revealed that President Assad had recently secured the removal of the Iranian Revolutionary Guard Corps (IRGC) commander for Syria; partly because IRGC forces had been deployed in places the regime had not agreed to. This move is likely to have been well received in the Gulf and on the Nile. "Assad could gain readmission to the Arab League and a rapprochement with neighbouring Arab states for a small price," says Andreas Reinicke, director of the German Orient Institute in Berlin, "but there will only be an end to sanctions and thus money for reconstruction if there is a political agreement." This requires, among other things, a new Syrian constitution, which is not in sight in the current UN process, says the former German ambassador to Damascus.

Abortions are illegal in Egypt unless they are necessary to save a married woman's life. But that doesn't stop local women from having one. Egyptian society needs to acknowledge ... END_OF_DOCUMENT_TOKEN_TO_BE_REPLACED

Food prices doubled, salaries halved, banks restricting withdrawals: Egyptians now have the same problems as the Lebanese. But if things get worse here, the fallout will be far ... END_OF_DOCUMENT_TOKEN_TO_BE_REPLACED

Giessen, Eichsfeld, Kusel, Berlin – cars bearing old German number plates are the latest trend on the streets of Cairo. Many Egyptians regard the discarded plates as chic. What ... END_OF_DOCUMENT_TOKEN_TO_BE_REPLACED

Egyptian Sufis have been on the defensive against the country's Islamists for decades. Meanwhile, interest in mysticism is growing among the young members of Cairo’s middle and ... END_OF_DOCUMENT_TOKEN_TO_BE_REPLACED

Chinese President Xi Jinping's visit to Saudi Arabia in December 2022 may have rattled Washington, but it simply highlighted the Arabs’ desire to diversify their foreign relations ... END_OF_DOCUMENT_TOKEN_TO_BE_REPLACED

END_OF_DOCUMENT_TOKEN_TO_BE_REPLACED
Social media
and networks
Subscribe to our
newsletter