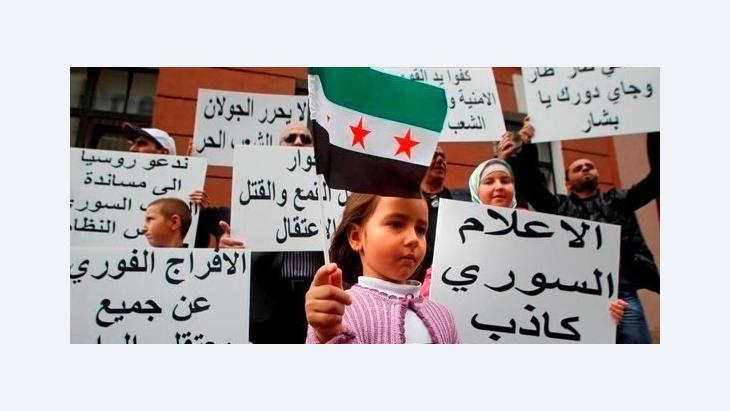 ''Syria in the Firing Line''

﻿International news reporting on Syria is increasingly focused on the armed conflict raging in the country. Yet, civilian opposition to the Assad regime is continuing as well. In her new book, Kristin Helberg reports on the peaceful origins of the Syrian revolution and the workings of Assad's machinery of power. By Martina Sabra

﻿Whenever foreign correspondents write books about "their country" or "their region," the results tend to oscillate between two extremes. In the worst case, an author aims to maximize profit and engage in some efficient self-marketing by collecting a number of previously published articles and re-packaging them bound together as a new work. In the best case, the author takes the time to offer what is rarely covered in their hectic daily reporting schedule – personal experiences and observations, revealing encounters, and deep analysis.

The book "Syria in the Firing Line" by Kristin Helberg falls into the "best case" scenario. Born in 1973, Helberg studied political science and then worked in broadcasting at Norddeutscher Rundfunk before moving to Damascus in 2001 to take up the post of Middle East correspondent. I was "alone among the scoundrels", she once described her situation, tongue and cheek. At the time, Syria, an enemy of Israel and an ally of Hezbollah, was castigated by the American administration as being a member of the so-called "axis of evil."

The end of the Damascus Spring

Kristin Helberg did not just polish up some already published articles, but instead wrote an independent book consisting of eight chapters. 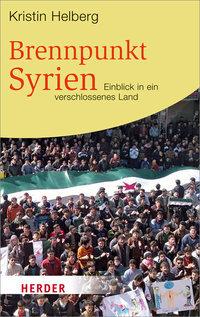 ​​The book covers her life and work as a correspondent in Damascus, the ethnic and religious fabric of Syrian society, the workings of Assad's machinery of power, the economic and social causes of the revolution, Syria's role in the region, the tense relationship between the peaceful opposition and the armed rebels, and, not least of all, possible outcome scenarios for this country shaken by civil war.

Kristin Helberg skilfully weaves her personal, everyday experiences and subjective observations into the whole picture without any banal sidetracking and all the while maintaining an easily readable, refreshing style, despite the tragedy of events in Syria.

When the author arrived in Damascus in November 2001, the so-called Damascus Spring with all its open debates was, for the most part, finished. Hopes of political reform under the young Bashar al-Assad had dispersed, many critics of the regime had fled into exile, were in prison, or had chosen internal emigration. To the young correspondent, Syria felt like a remnant from the Cold War. "Where else besides North Korea could one find a country without Coca Cola or American fast-food restaurants?"

Despite the dictatorship and the tense political situation in the world, Helberg quickly felt at home in Syria. For one thing, very few foreigners have established long-term residency in Damascus. The mega-city is like a village – it doesn't take long to get to know people. And for another thing, as a result of their many years of isolation, Syrians are quite curious about foreigners and are generally open-minded when meeting them. The tall, thin German woman was treated like a daughter or sister by the neighbours in her district. Such affectionate care could occasionally trigger stress. For instance, whenever Kristin Helberg simply wanted to be alone, her Syrian acquaintances would inquire if she was sick.

Although community life in her district was pleasant and uncomplicated, political repression at work remained a constant factor. For two years, Helberg had to endure sitting endless hours in smoky government offices until the Syrian Ministry of Information finally granted her, seemingly by chance, official accreditation as a journalist.

Subsequently, her reports were not directly censored, but "Big Brother" was always close by. Many potential interview partners declined to talk for fear of repression. Opposition figures fled in the middle of discussions as security agents approached. When writing, she was constantly faced with the question, "What is permissible and what not? Have I crossed a red line here?"

After publishing an article on Bashar al-Assad, Kristin Helberg lost her accreditation in 2009. Since early 2011, she can no longer officially travel to Syria. 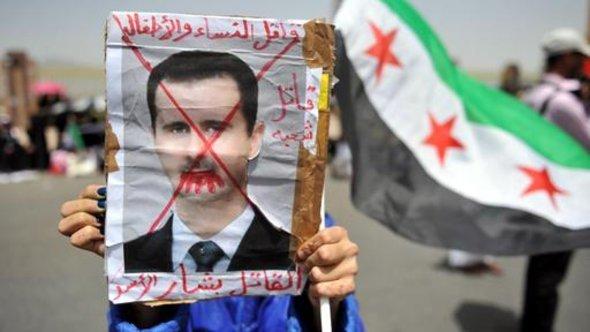 Opposition to the murderous Assad regime: What began as a peaceful revolution against the Baath dictatorship in March 2011 has turned into an armed struggle and civil war in which some 29,000 people have already been killed

​​"Syria in the Firing Line" is a personal book, but also an informative work of political non-fiction. The author provides a comprehensive account of the history and beliefs of Syria's various ethnic groups and religious communities, the Alawites in particular, as well as describing the status of the different confessions in the political power structure.

Stress is also given to explaining the causes of the revolution. The liberalization of the economy over the past decade resulted on the one hand in modernization and progress, yet this has also led to the impoverishment of large sections of the population, especially in rural districts. Economic misery in combination with massive corruption and political stagnation developed into an explosive mix that could no longer be diffused with mere rhetoric of future reforms.

Helberg compares the Syrian regime to something akin to a mafia clan. "Bashar al-Assad talked about reform, his brother and brother-in-law locked up opponents to the regime, and cousin Rami [Makhlouf] controlled the economic elite. The roles were perfectly divided. Far-reaching political changes (…) were simply unthinkable under such a constellation."

Yet, in light of the chaotic developments in neighbouring Iraq, not all Syrians were in favour of overthrowing the regime. For a while, there was even broad support for Bashar al-Assad within the Syrian population. If he had only reacted earlier and instigated political reforms, perhaps the bloody escalation could have been avoided, writes Kristin Helberg. She is astonished at the tenacity of Bashar al-Assad in holding on to power. "I have to admit that I didn't believe him capable of such a bloody fight for political survival – the regime as a whole most certainly, but not Bashar personally. It is probably not possible in Syria to separate the leader from the regime."

And what happens next? Kristin Helberg does not realistically expect a Western military intervention to overthrow the Assad regime. Nonetheless, the West could do far more, criticises the journalist. There is the frequent claim that it is not possible to truly know what is going on in Syria – from who is protesting on the streets to which side is responsible for acts of atrocity – due to the lack of independent reporting.

Kristin Helberg vehemently challenges this viewpoint. On the one hand, civil disobedience and the massacres in Syria are quite comprehensively and exactly documented. On the other, in the final analysis, it is the Syrian government that is responsible to protect its citizens from torture and murder.

"We are not in Hollywood, but at war"

The occasionally voiced reproach that the release of particularly gruesome videos serves the political interest of one side or another is insupportable, says Helberg. 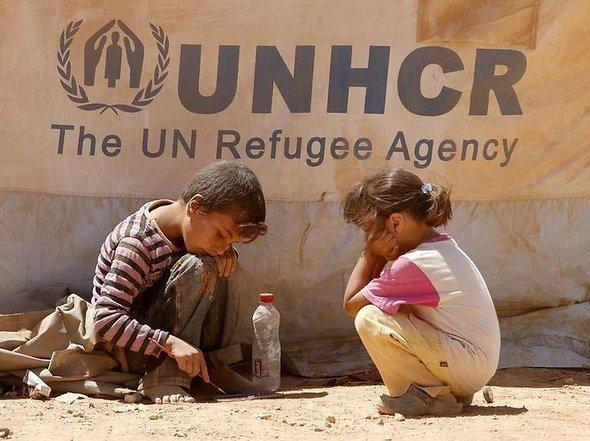 Children are the main victims of the bloody conflict. "In its struggle to survive, Syria's unscrupulous regime (…) has destroyed not only large swathes of society and the country's infrastructure, but, above of all, the very future of Syria"

​​"It is impossible to stage images of a teenager with the lower half of his face torn to shreds and therefore forced to scream with his eyes. There are other images that could not have simply have been orchestrated, such as that of a young man, shot in the head and lying in his own blood on the street, who was fired upon after taking part in a demonstration. Or that of a helicopter circling overhead and shooting down on a residential district. There can be no screenplay for such scenes. We are not in Hollywood, but at war. And this is a war by the Syrian regime against its own people."

Kristin Helberg offers no concluding prognosis on how long this war against the Syrian people will last or whether the Assad regime will fall as a result of economic problems, its crumbling support, or both. In any case, she does not want to give up on the hope of a free and democratic Syria after the departure of Assad. Yet, she sees a real danger in the country splitting up along religious and ethnic lines.

And even if this doesn't take occur, a new Syria would face massive challenges. The smouldering religious-political conflicts, which are constantly glossed-over by interested parties, must finally be addressed. In addition, Syrian society is already plagued by a collective trauma that will take generations to overcome.

"In its struggle to survive, Syria's unscrupulous regime (…) has destroyed not only large swathes of society and the country's infrastructure, but, above of all, the very future of Syria."

For this reason, Kristin Helberg has dedicated her book to the children of Syria.

Kristin Helberg: "Brennpunkt Syrien. Einblick in ein verschlossenes Land" (Syria in the Firing Line. Insight into a closed country), published by Herder Verlag, 2012, 272 pages. The book is not yet available in English.

Germany’s electorate includes some 7.4 million citizens with international roots, while many more millions of residents from abroad aren’t allowed to vote. Both groups are often ... END_OF_DOCUMENT_TOKEN_TO_BE_REPLACED

"The people aren’t ready for democracy" has been the constitutional basis for Arab tyranny, its favourite slogan and its sacred narrative for more than a century. Yet, asks Khaled ... END_OF_DOCUMENT_TOKEN_TO_BE_REPLACED

Two decades after the attacks of 11 September 2001, the West faces the shattered debris of its failure – not only in Afghanistan, but also in Iraq, Syria, Libya and Yemen. What ... END_OF_DOCUMENT_TOKEN_TO_BE_REPLACED

They have lost everything; they are deeply traumatised – and yet they refuse to give up hope. In “The Beekeeper of Aleppo“, bestselling author Christy Lefteri focuses on the ... END_OF_DOCUMENT_TOKEN_TO_BE_REPLACED

The disappearance of Razan Zeitouneh and her colleagues has been one of the greatest mysteries of the Syrian war – until today. DW's investigative unit hunted clues across six ... END_OF_DOCUMENT_TOKEN_TO_BE_REPLACED

How can the various realities of Kurdish life, shaped by depression, resistance and war, be depicted in art? This is the question addressed by the “bê welat – the unexpected ... END_OF_DOCUMENT_TOKEN_TO_BE_REPLACED
Author:
Martina Sabra
Date:
Mail:
Send via mail

END_OF_DOCUMENT_TOKEN_TO_BE_REPLACED
Social media
and networks
Subscribe to our
newsletter