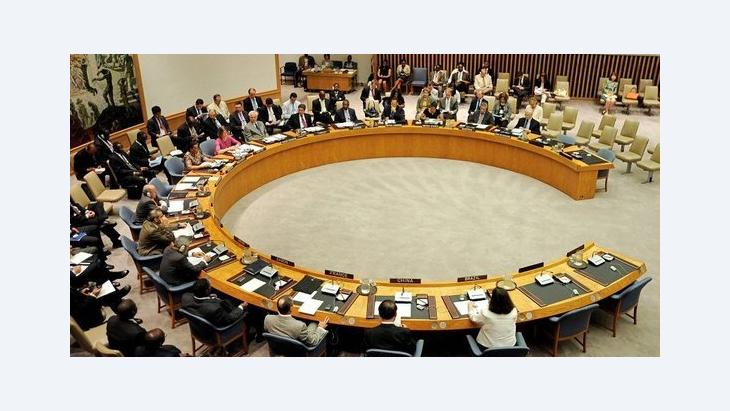 Syria
Plea for a Humanitarian Intervention

The urgently needed humanitarian intervention in Syria will only become reality if there is consensus between the five veto powers in the UN Security Council. As impossible as it seems – it can be done, says Andreas Zumach

Over 8,000 people have been killed in Syria over the past few months. Most of them were killed by soldiers or other members of President Bashar al-Assad's security forces. UN High Commissioner for Human Rights Navi Pillay and an investigation commission set up by the UN Human Rights Council estimate that the Assad regime's brutal crackdown against parts of the Syrian population now constitutes a "crime against humanity".

Theoretically, this gives the international community the "responsibility to protect" the citizens of Syria from their own authorities. To date, however, all political, diplomatic and economic pressure exerted as a way of carrying out this responsibility has failed. Neither the clear condemnation of Syria by a 3/4 majority of the UN General Assembly and the Human Rights Council nor the economic sanctions imposed by the West have moved Assad to halt the violence against his own people. 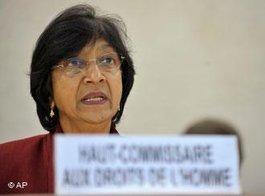 ​​Even Kofi Annan, the special envoy of both the UN and the Arab League, could not persuade Assad to yield in the slightest. Some of Annan's proposals for a political solution to the conflict were also rejected by parts of the opposition, especially its representatives in exile. Syria is now facing both a lengthy, nationwide civil war that will cost many more lives than was the case in Libya and the collapse of the country, which will have a destabilizing effect on the entire Middle East.

However, when it comes to preventing this worst-case scenario, there is one option that has not yet been tried, namely a humanitarian intervention using military means that is supported by all five veto-wielding powers in the Security Council.

Having examined the relevant political and international law criteria for a "humanitarian intervention" using military means, many experts have so far advised against such an undertaking in Syria. In doing so, they have quite rightly referred to questionable or failed interventions in recent history, in particular to NATO's aerial war against Serbia in 1999. The Western military alliance waged this war without the approval of the UN Security Council, breaking international law in the process. 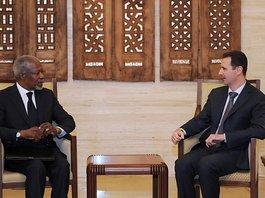 Kofi Annan, UN and Arab League's envoy to Syria, visited Syria last week to deliver a proposed peace plan which includes demands for an immediate ceasefire by both sides. However, Assad and even the opposition rected the plan

​​However, it justified the move by saying that it was a necessary humanitarian intervention in support of the Kosovo Albanians. The war waged last year by a NATO-led military alliance, which led to the toppling of the Gaddafi regime in Libya, is also a warning in this respect. This war was the result of the abuse of a resolution passed by the Security Council, which only allowed for the establishment of no-fly zones and the protection of the civilian population.

The political and international-law related reservations regarding a humanitarian intervention in Syria are indeed serious. However, these reservations only ever relate to the political framework of the dissent between the five veto powers in the UN Security Council.

With the exception of Rwanda in 1994, this dissent was undoubtedly the political reality in all cases where intervention to prevent or end genocide or crimes against humanity has been debated since the end of the Cold War. This is why discussions about possible action that can be taken in the event of the most serious human rights violations have all too easily settled into this cosy and unimaginative reality of dissent.

As far as Syria is concerned, it is vital that consensus between the five veto powers on a humanitarian intervention by military means is sought and then jointly implemented. The top priority would be the stationing of UN peacekeeping forces tasked with opening up and securing land corridors to allow the people of Syria to be supplied with the goods they need to survive and to allow refugees and the injured to be transported out of the conflict zone.

Assad might initially protest against a corresponding consensus agreement between the five veto powers, but if not only US and Russian troops, but also, if at all possible, blue berets from China, the UK and France were to be stationed in Syria, it is hard to imagine Assad's armed forces taking on these troops. 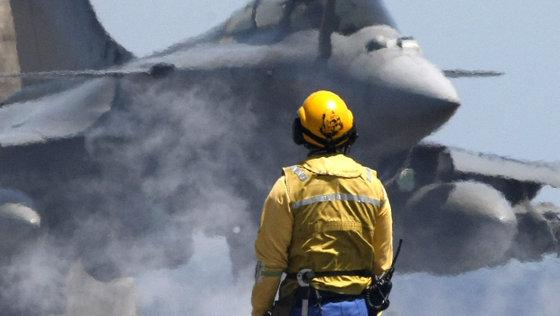 According to the "responsibility to protect" doctrine, if a state fails to protect its citizens from "genocide, war crimes, ethnic cleansing, and crimes against humanity," it becomes the international community's responsibility to do so, as was done in Libya, for instance

​​Is this the naive illusion of a lunatic? Well, if so, then it is not the first time. Back in the autumn of 1998, for example, there was a lunatic by the name of Alexander Verschbow. He just happened to be the US's Permanent Representative to NATO in Brussels. Verschbow responded to the serious human rights' violations committed by Serbian "security" forces against the Albanian population in Kosovo and the escalating counter-violence perpetrated by the Kosovar "liberation" movement, the UCK, by putting a detailed plan to the Clinton administration in Washington.

This plan entailed the stationing of a Russian-American peacekeeping force in Kosovo with the backing of the Security Council. Verschbow cabled Washington that "10,000 soldiers would be needed if the Serbian President Milosevic agrees; 30,000 if he doesn't". But his creative proposal for ending the bloodshed in Kosovo ended in the wastepaper basket. This episode alone contradicts NATO's claim that its humanitarian intervention, which took the form of an aerial bombardment of Serbia that began in March 1999 and broke international law, was the only way to end Serbian human rights violations in Kosovo.

From Washington to Peking, all of the governments involved in the debate about Syria say that the priority must be to stop the bloodshed. If these assertions are serious, it must be possible to reach consensus about a humanitarian intervention. However, Moscow and Peking suspect that for the West and the Sunni governments of the Arab League, this is not about the human rights of people in Syria, but about toppling Assad's regime, and that this, in turn, is a first step towards waging war against Iran and toppling the regime in Tehran. 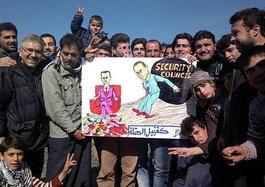 Anger and outrage about Russia's support for the Syrian regime: Syrian protestors hold up a drawing that depicts how Vladimir Putin holds away the UN Security Council from a Assad who can thus continue to kill Syrian citizens

​​The West could do much to allay these suspicions, thereby improving the chances of a joint course of action involving Russia and China. It could table a draft resolution in the Security Council that focuses solely on the modalities of a humanitarian intervention and could forego all condemnations, threats of sanctions and calls for Assad's resignation. The draft resolution submitted by Germany and other states during the Security Council meeting on Syria at the start of this week, did not meet these requirements and was, therefore, once again rejected by Russia and China.

If international consensus on a humanitarian intervention is not reached, the only remaining option would be to offer Assad and his clan secure exile abroad and an amnesty.

Many people – including the author of this article – are convinced that this is not an option because of the fact that working through and punishing serious human rights violations is an important prerequisite for justice and reconciliation and, consequently, for lasting peace and inner stability in a country. However, given the threat of the "worst-case scenario" for Syria and its neighbours, offering Assad exile and amnesty would be the lesser of the two evils.

Home
Print
Newsletter
More on this topic
After the Veto of the UN Resolution: Syria on the Brink of Civil WarUprising in Syria: Homs and Hama: Is History Repeating Itself?The Syrian Uprising: Assad Will Fall, But What Will Follow?
Related Topics
Arab Spring, Arabellion, Democracy and civil society, European Union (EU), Human rights, Syrian Civil War, U.S. policy in the Middle East
All Topics

For a century, the Kurds and other minorities in Turkey have been subject to state repression. With his dissertation "The Kurdish Question in Turkey", political analyst Ismail ... END_OF_DOCUMENT_TOKEN_TO_BE_REPLACED

Syria, Egypt, Saudi Arabia and the UAE are among those countries increasingly misusing cybercrime legislation to silence dissent and curb freedom of speech. Could a new global ... END_OF_DOCUMENT_TOKEN_TO_BE_REPLACED

A new exhibition, "Syria – Against Forgetting", at Cologne’s Rautenstrauch-Joest-Museum focuses on Syria's artistic and cultural heritage and pays tribute to the country before ... END_OF_DOCUMENT_TOKEN_TO_BE_REPLACED

This year’s Morgenland Festival opened with the premiere of Kinan Azmeh’s musical theatre piece, “Songs for Days to Come”, based on fifteen poems by contemporary Syrian poets. ... END_OF_DOCUMENT_TOKEN_TO_BE_REPLACED

Longlisted for the 2020 International Prize for Arabic Fiction and now available in German translation, Khaled Khalifa’s novel “No One Prayed Over Their Graves” details lives and ... END_OF_DOCUMENT_TOKEN_TO_BE_REPLACED

Rumi's poems, though generally stripped of their Islamic symbolism, are hugely popular around the world. Yet Islamic mysticism is still very much at the heart of these verses. ... END_OF_DOCUMENT_TOKEN_TO_BE_REPLACED
Author:
Andreas Zumach
Date:
Mail:
Send via mail

END_OF_DOCUMENT_TOKEN_TO_BE_REPLACED
Social media
and networks
Subscribe to our
newsletter