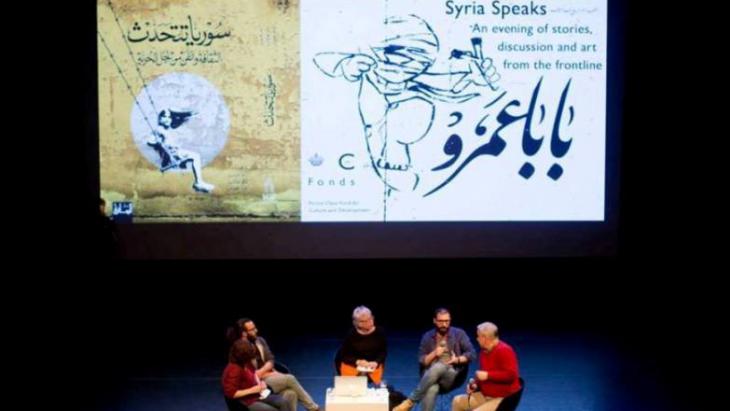 The recent launch of "Syria Speaks: Arts and Culture from the Frontline" at events in The Hague and Amsterdam was in a sense a homecoming for a remarkable book whose roots lie in an exhibition of works by Syrian artists and cartoonists held at the Prince Claus Fund Gallery in Amsterdam in 2012. By Susannah Tarbush

The Prince Claus Fund for Culture and Development has championed the book "Syria Speaks" from its inception, and continues to do so. It organised the launch in The Hague's Theater Aan Het Spui on 25 March as part of the Movies that Matter Film Festival, held annually by Amnesty International. The following day, the book was launched in Amsterdam at the American Book Center.

London-based editor and writer Malu Halasa was a curator of the ground-breaking 2012 "Culture in Defiance" exhibition in Amsterdam. She subsequently became a co-editor of "Syria Speaks". Among the more than 50 Syrian contributors to the 312-page book are many whose work was displayed at the exhibition.

In their introduction to "Syria Speaks" Halasa and her fellow co-editor, Syrian researcher and writer Zaher Omareen, write: "Simply put, creativity is not only a way of surviving the violence, but of challenging it." Since the beginning of the Syrian uprising in 2011, "everything has been radically altered on the ground – except for its artistic identity." 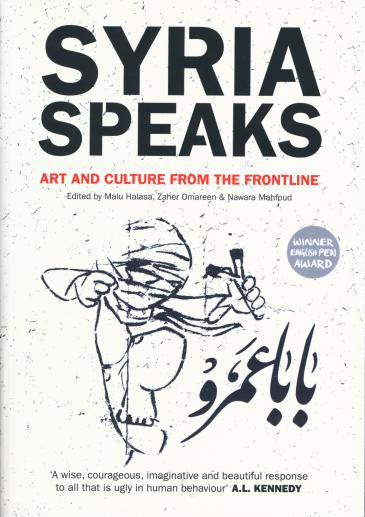 According to publishing company Saqi, "Syria Speaks" is a "celebration of a people determined to reclaim their dignity, freedom and self-expression. It showcases the work of over fifty artists and writers who are challenging the culture of violence in Syria"

"Syria Speaks" was published in London last summer by Saqi Books. Its main sponsor was the Prince Claus Fund, with additional financial support coming from the Danish Center for Culture and Development (CKU). The book won an award for promotion from English PEN, under its Writers in Translation programme, and this helped fund a UK tour of the book. "Syria Speaks" was subsequently presented at the Edinburgh International Book Festival, and toured the US in December. Meanwhile Saqi published an Arabic edition: the majority of the texts in the English original had been translated from Arabic by a team of five translators.

The "Syria Speaks" evening at the Movies that Matter Festival was introduced and moderated by Halasa. Omareen presented screenings of short films from Syria's first Mobile Phone Film Festival, of which he was an organiser. Mobile phones, and the videos they produce, have been a major vehicle of documentation and cultural resistance since the start of the Syrian uprising four years ago.

The Mobile Phone Film Festival took place inside Syria over the three days 15–17 October, in five locations: Kafranbel, Aleppo, Atareb, Jabal al-Zawiya and Deraa. But a planned screening in Kobani had to be cancelled due to attacks by IS in the area.

The line-up at the "Syria Speaks" event included the veteran writer and public intellectual Yassin Al-Haj Saleh, journalist and writer Rasha Abbas and an unnamed representative of the anonymous Syrian artists' collective Al-Shaab al-Suri Aref Tariqahu (The Syrian People Knows Its Way) famed for its members' striking poster designs, one of which appears on the cover of the book.

Art and culture from the frontline

The book includes an extensive interview with Al-Haj Saleh, entitled "On the Intellectual and the Revolution", and Rasha Abbas's short story "A Plate of Salmon is Not Completely Cleansed". It also has an 18-page chapter, "The Art of Persuasion", on Al-Shaab al-Suri Aref Tariqahu with numerous examples of its members' poster art, and commentary by art historian Charlotte Bank.

Yassin Al-Haj Saleh spent 16 years in jail from 1980 under President Hafez al-Assad, Bashar's father. After the 2011 uprising began, he lived in hiding inside Syria, escaping to Turkey in autumn 2013. In 2012, he received a Prince Claus Award, which recognises an individual's outstanding achievements in culture and development.

Al-Haj Saleh gave historical context to the cultural struggle when he said in his "Syria Speaks" interview: "The impact of imprisonment, and tyranny in general, has been evident in Syrian culture since the 1970s. From that time, the idea of democracy and its accompanying political, legal and ethical issues have dominated the work of Syrian intellectuals. In literature and art too, people became more concerned with issues of oppression, prison and freedom."

Ziad Homsi is part of the Lens Young collective of citizen photographers, whose searing images are featured in "Syria Speaks". Such photographers often face extreme danger, and Homsi has had the unnerving experience of being arrested by IS outside Raqqa and held for 18 days before being released. 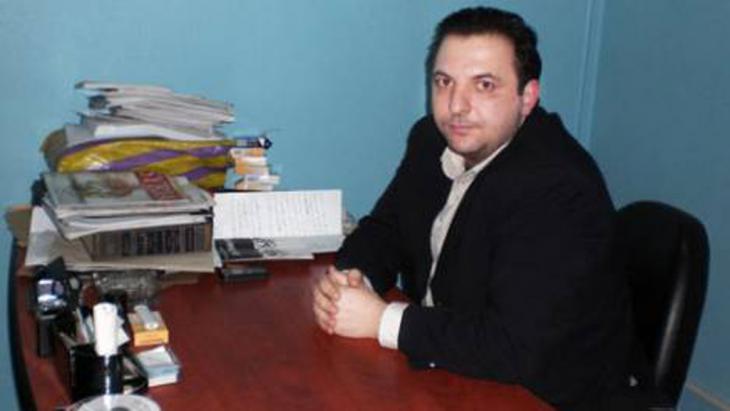 Mazen Darwish, lawyer and founding president of the Syrian Centre for Media and Freedom of Expression (SCM), has been in prison since he and 15 others were arrested by Syrian security services in February 2012. His contribution to "Syria Speaks", "Letter for the Future", was smuggled out of Damascus Central Prison

Imprisoned for their art and resistance

Quite a few of the contributors to "Syria Speaks" have suffered imprisonment. Two nights before the Hague launch, English PEN organised a candlelit vigil on London's Millennium Bridge calling for the release of Mazen Darwish, founding president of the Syrian Centre for Media and Freedom of Expression (SCM), and his colleagues Hani Al-Zitani and Hussein Gharir.

The three have been held since being arrested in February 2012 when their offices were raided by Syrian security services. Darwish, who is a lawyer, journalist and human rights defender, is represented in "Syria Speaks" through "Letter for the Future". This was written in acceptance of the 2013 Bruno Kreisky Prize for Services to Human Rights, and smuggled out of Damascus Central Prison.

Darwish's wife, the journalist and SCM director Yara Bader, is also a participant in "Syria Speaks". Her essay "Lifetimes Stolen" examines how "two generations survive political imprisonment in Syria." Her father spent 12 years in jail, and she was herself imprisoned for a time after being arrested with her husband and SCM colleagues.

The futility of the regime's attempt to stifle voices of dissent through imprisoning Darwish and so many others was underlined in October 2014 when writer Salman Rushdie chose Darwish to share the prestigious annual PEN Pinter Prize with him. Moreover, in early April Darwish was named, to international acclaim, winner of the $25,000 UNESCO/Guillermo Cano World Press Freedom Prize.

Home
Print
Newsletter
More on this topic
Four years of war in Syria: Where the uprising began and still lives onThe Syrian art project "Cutting Away the Void": Documenting the tragedy of the Syrian revoltInterview with the Syrian blogger Aboud Saeed: "When the regime lost its control, I lost my fear"The kidnapping of the "Douma 4": The Salafist and the human rights activistInterview with the Syrian artist Diala Brisly: Art is a luxury in Syria
Related Topics
Arab Spring, Art, Assad regime, Literature, Syrian Civil War, Syrian opposition, Visual arts
All Topics

Since Ali Khamenei, Iran's most powerful man, has openly and unconditionally come out in support of Putin's war in Ukraine, logistical help is on its way, with an allegedly ... END_OF_DOCUMENT_TOKEN_TO_BE_REPLACED

The Palestinian militant organisation Hamas, with Hezbollah's help, is building up a military presence in Lebanon, the ultimate consequences of which could be devastating, writes ... END_OF_DOCUMENT_TOKEN_TO_BE_REPLACED

In this essay, renowned Lebanese journalist and writer Hazem Saghieh asks whether the Arab Levant, which stretches from Iraq in the east to Egypt in the west, will remain an ... END_OF_DOCUMENT_TOKEN_TO_BE_REPLACED

Khaled Bahlawan hammers nails into a traditional wooden boat he built by hand, toiling under the scorching sun on Syria's Mediterranean coast to preserve a disappearing ancient ... END_OF_DOCUMENT_TOKEN_TO_BE_REPLACED

"Flugt" is the world's first museum dedicated to the stories of those forced to flee. The new museum, which focuses on the fates of refugees then and now, is housed in a former ... END_OF_DOCUMENT_TOKEN_TO_BE_REPLACED

"Finding Home", the second album by Syrian-born, UK-based musician Maya Youssef, works through feelings of loss and destruction until its music reaches a place beyond war and ... END_OF_DOCUMENT_TOKEN_TO_BE_REPLACED
Author:
Susannah Tarbush
Date:
Mail:
Send via mail

END_OF_DOCUMENT_TOKEN_TO_BE_REPLACED
Social media
and networks
Subscribe to our
newsletter