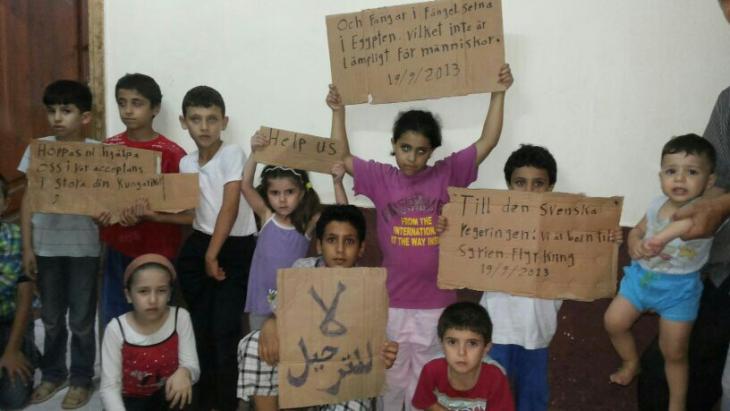 Syrian Boat Refugees in Egypt
"Head Straight on to Europe!"

Many Syrian refugees are trying to reach Europe from Egypt via the Mediterranean. They are risking their lives to escape the civil war in their homeland. A reportage by Karim El-Gawhary in Abukir, Egypt

"Do you have a pound for a berth on a boat to Italy?" asks an old one-eyed man with a walking stick, turban and long bushy beard. He's grinning through the open car window. In the run-down Egyptian coastal town of Abukir, west of the Mediterranean port of Alexandria, even the beggars have a clear aim – and that lies behind the sea's horizon. The hope is there, where the Europeans sunbathe on the beaches, or it dies on en route.

If Abukir was once the place where Britain's Lord Nelson and his Royal Navy sank Napoleon's fleet, today it is the place where refugees, most of them Syrian, embark on the dangerous crossing to Europe. Syrians are paying up to 4,000 dollars for a berth on one of the boats, says Abou, who runs a small kiosk on the beach. The boats mostly set sail at night, full to capacity with around 200 people on board and a few smaller boats in tow. 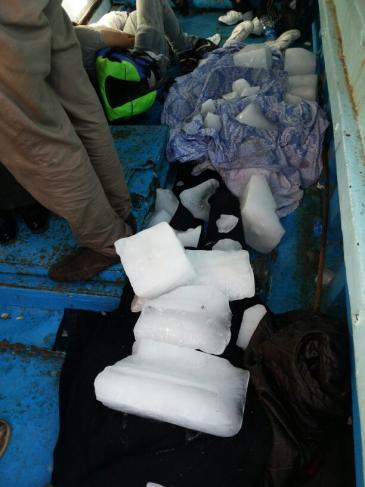 Tough crackdown by the Egyptian coastguard: Two refugees on board a refugee boat were shot dead and another seriously injured as the craft was prevented from continuing its journey. Ice was used to stop the corpses from decomposing

The refugees are transferred to the smaller craft shortly before reaching the Italian coast, and then it's just a matter of heading straight on to Europe! "For those who drown, it's tough luck, those who get there, well, they've made it, and those who are arrested, that's just the way it turns out. The traffickers win whatever happens," Abou summarises the people smugglers' business model.

The boats are only worth a fraction of what the Syrians crammed onto them have paid. Sometimes the refugees are set down on one of the few small off-shore Egyptian islands, where they are later picked up by the coastguard and arrested.

One such boat set sail on 17 September with 240 refugees on board. But it didn't get very far: before long it was intercepted by the Egyptian coastguard. The officials ordered the boat to stop, but the traffickers continued, probably out of fear. The coastguards then fired on the boat. Two of the refugees on board were killed and another seriously injured before the ship was forced to stop and the refugees taken back to shore.

Egypt is perhaps the only nation in the world that opens fire on refugees that are trying to leave the country. "Egypt is doing the dirty work for those European countries who've demanded that the nation on the Nile stop the wave of refugees coming via the sea route," explains Egyptian human rights lawyer Ahmad Nassar from Alexandria. Over the past two months, since the coastguard has been taking a tougher line, almost 1,000 refugees have been detained.

Some of those who survived the ill-fated trip on 17 September are being held at the Abukir's small police station. Just over 100 refugees, including 40 children, are being detained here. After much negotiation, a police officer finally opens the padlock securing the door. "I could get into trouble for this, but these people need help. Please write about them so that the Europeans understand what's going on here," he says.

The atmosphere here is more like that of a refugee camp than a police station. Washing hangs out to dry. One of the rooms serves to accommodate women and children, another is for the men. 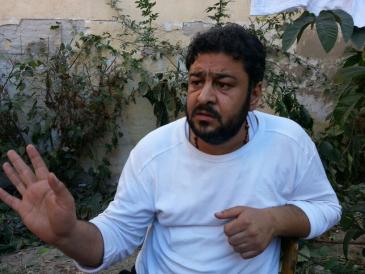 "We knew the crossing would be dangerous, but back home in Syria it was even more dangerous," Muntazir, spokesman for the Syrian refugee group, sums up his dilemma

Muntazir is a self-appointment spokesman for the group. He again tells the story of how they were intercepted by the coastguard. He shows mobile phone footage as evidence. The film also captures the moment after the boat was fired upon. Shock and panic are visible in the eyes of the refugees on board. And the mobile phone video repeatedly pans over the two corpses, that of a young man and a woman.

They also took photos. One shows the two dead bodies covered with ice blocks to prevent them decomposing in the heat. "We knew the crossing would be dangerous, but back home in Syria it was even more dangerous," Muntazir sums up his dilemma.

The 35-year-old is alone here. His wife and his daughter are still in Damascus, although their house in the Palestinian quarter of Yarmuk has in the meantime been destroyed. "My 12-year-old daughter started wetting the bed again out of fear at the almost daily bombardments. It was then I knew we had to leave," he says. Because he didn't have enough money for the whole family to make the crossing, he planned to be the first to go on ahead and try and fetch his family later.

If not illegally, then how?

Crossing the sea from Lebanon costs twice as much, so he came to Egypt. "I thank God that my family was not with me on that trip," he says in hindsight. "In Europe they only give us refugee status, if we manage to get there at all. But how are we supposed to get there, if not illegally via the sea route?" he asks and adds: "People need some kind of hope. We have to risk our lives to find a safe place." Muntazir has spent many years working as surgical assistant. He believes there is a need for people with this kind of experience in Europe. 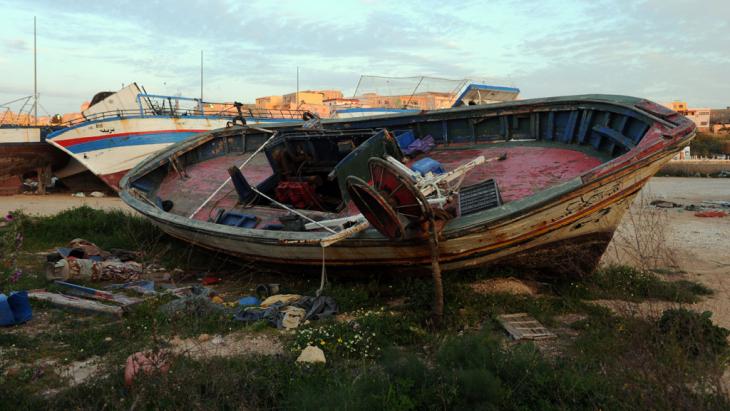 Risking their lives to reach Europe: Refugees of the Syrian civil war are now congregating in the Egyptian coastal town of Abukir to make the perilous Mediterranean crossing

Alaa, another refugee at the station with his wife and three children, says that just a few days before the ill-fated journey, he was still at the Austrian embassy in Cairo. He wanted to present his case there in the hope of being accepted. They didn't even get past the security official at the door. "That was the day we decided to try it illegally by sea. What other choice did we have?" He is interrupted by a woman holding a mobile phone with a photograph on it. The picture shows a ruined building. "That's our house. Are we supposed to go back there?" she asks.

"The Europeans give Syrian refugees few options to reach Europe through legal channels. Italy and Germany in particular are pressurizing Egypt to stop the boats," explains human rights lawyer Nassar. "The solution would be to officially accept more refugees in Europe and also help Syria's neighbours absorb them," says the activist. "These Syrian refugees are people who are being treated like animals."

The Egyptians will offer the people at the police station in Abukir the option of travelling on to a nation of their choice without a deportation stamp in their passport. The only two countries they can choose from are war-torn Syria and Lebanon. The latter nation is completely overwhelmed by the refugees. It is estimated that by the end of the year, 40 percent of people living in Lebanon could be Syrian refugees. Transposed to Germany, this would be equivalent to 32 million refugees; to Austria 3.2 million.

In a corner of the police station sits 13-year-old Ibrahim, staring into space. It was his mother who was shot dead on the boot – directly alongside him. He relates what happened, rattling off an account almost mechanically. He also reports that he sat next to her and cried. Now it's just him and his 21-year-old brother. The two were allowed to leave the station once for a short while: to bury their mother at a cemetery in Abukir.

Anyone sitting opposite Ibrahim quickly forgets what he actually wanted to ask, the boy's pain and shock are so tangible. What would Ibrahim liked to have done in Europe, if he, his brother and his mother had managed to get there? "It was my greatest wish just to go to school again," he replies briefly. And what did he want to be later? Ibrahim thinks for a moment: "I would most like to be a doctor," he says, "so that I can help other people."

Home
Print
Newsletter
More on this topic
The Lampedusa Tragedy: EU Refugee Policy Is Morally BankruptThe EU's Migration and Asylum Policy: Not in Line with European ValuesCamps for Syrian Refugees in Zaatari and Atma: Cut off from the Rest of the World
Related Topics
European Union (EU), Human rights, Migration in Germany, Policy on refugees and migration, Syrian Civil War
All Topics

People in Arab countries have been talking more openly about sex and sexuality for some time now, especially on social media. And for the first time ever, they have the vocabulary ... END_OF_DOCUMENT_TOKEN_TO_BE_REPLACED

Alaa Abd el-Fattah, arguably Egypt’s most prominent democracy activist, has just been handed another lengthy prison sentence. Despite this, a book of his writing has recently been ... END_OF_DOCUMENT_TOKEN_TO_BE_REPLACED

A prominent rights group in Egypt, the Arabic Network for Human Rights, is ending operations just as the country braces for a controversial NGO law. Is this the beginning of the ... END_OF_DOCUMENT_TOKEN_TO_BE_REPLACED

Moncef Marzouki was Tunisia's first democratically elected president after the fall of dictator Ben Ali. Today he is the most prominent critic of increasingly counter- ... END_OF_DOCUMENT_TOKEN_TO_BE_REPLACED

Asef Bayat, professor of Sociology at the University of Illinois, Urbana-Champaign, has been studying revolutions and how they affect people since 1979. In his recent book, " ... END_OF_DOCUMENT_TOKEN_TO_BE_REPLACED

Every year in December, the team at Qantara.de takes a look back at the articles that proved most popular with our readers. This year is no different. Here is a run-down of the ... END_OF_DOCUMENT_TOKEN_TO_BE_REPLACED
Author:
Karim El-Gawhary
Date:
Mail:
Send via mail

END_OF_DOCUMENT_TOKEN_TO_BE_REPLACED
Social media
and networks
Subscribe to our
newsletter