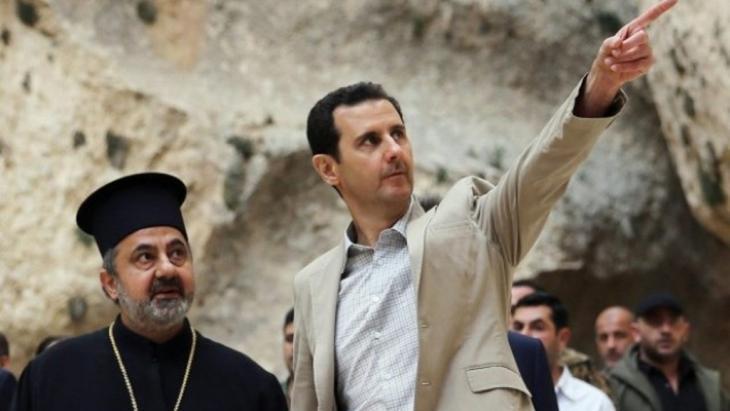 Syrian Christians and the Assad regime
"Assad is only protecting himself"

Syria's dictator Bashar al-Assad likes to present himself as a champion of his nation's religious minorities, in particular the Christians. But increasing numbers of Syrian Christians in exile are resisting this narrative. By Martina Sabra

Patriarch Gregorios III Laham of Antioch is a Syrian national and head of the Melkite Greek Catholic Church, a prominent Catholic community originating in the Middle East. It was recognised more than 300 years ago by the Pope in Rome and has some 1.6 million followers. The official seat of the cleric, who is over 80 years ol´d, is Damascus.

Gregorios III Laham has publicly affirmed his loyalty to the Assad regime on many occasions, most recently in April 2014, following the recapture of the Christian town of Maalula by government forces. However, the otherwise eloquent man of the cloth remains silent on the serious human rights violations, the horrors being perpetrated in Syrian torture chambers and the many other crimes of the Assad regime.

Although the opportunism of most Church dignitaries in Syria is nothing new, there have recently been signs of disaccord – still cautious, but nevertheless increasingly perceptible. When Patriarch Gregorios III Laham visited France in mid-May 2014, Syrian Christians in exile issued a public appeal to the Church leader and other Syrian Christians to no longer make themselves accomplices of the dictatorship.

"It is simply not acceptable that Christians dispense with basic rights such as democracy and freedom of expression in exchange for what passes for religious freedom" is the gist of what they wrote in an open letter. The authors of this appeal, which was issued in French, German, Arabic, English and Italian, are the "Syrian Christians for Peace", a group that publishes its messages on Facebook and on the World Wide Web via the information portal "all4syria". 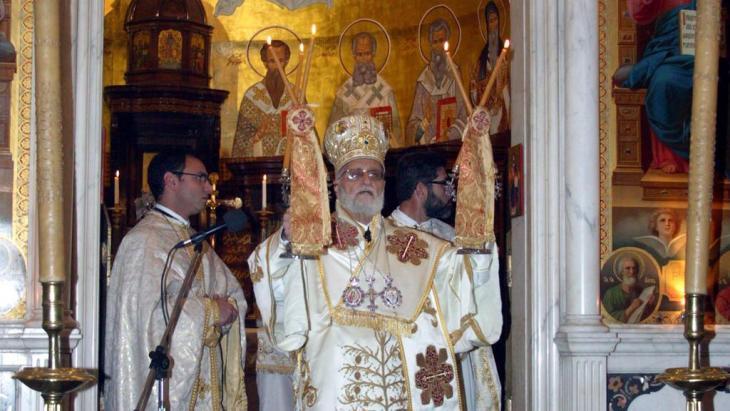 Public backing for Assad: according to Martina Sabra, Gregorios III Laham (pictured here) has publicly declared his loyalty to the Assad regime on many occasions, while remaining "silent over the serious human rights violations, the horrors being perpetrated in Syrian torture chambers and the many other crimes of the Assad regime."

Christians against the Assad regime

The Syrian national Ayman Abdulnour is the group's spokesperson, a former fellow student of and adviser to President Bashar al-Assad, who officially broke with the regime in Damascus in 2007 and has been living in exile ever since.

The appeal was disseminated by, among others, the France-based NGO "Souriahouria", a Franco-Syrian network which counts prominent Syrian intellectuals and creative artists among its members and by its own account, supports the Syrian revolution against the Assad regime.

The open letter by the "Syrian Christians for Peace" in mid-May 2014 was not the first public statement against the Assad regime issued by Syrian Christians. Back in March 2014, exiled Christian Syrians in Germany and Switzerland initiated a similar appeal, the "Declaration of democratic Syrian Christians". Among other things, they called for Syria to become a democratic state under the rule of law, where all citizens enjoy equal rights and where religion and the state are properly separated. An excerpt from the text, which can be called up on Facebook, reads:

"Belief in Christ is for us the source of support for the rebellion against the Syrian dictator and the basis for the battle for freedom and dignity. The regime of Bashar al-Assad was and can never be the guardian of Christian minorities. It only safeguards the interests of the dictatorship's mafia-style structures."

One of the initiators of the appeal is Marwan Khoury, a Christian doctor from Syria who has lived in Germany for many years and who has, over the past two years, devoted almost all his free time to organising aid deliveries to Syrian refugees.

Collaboration with the secret service

Khoury says that the exploitation of Syrian Christians by the Assad regime is nothing new: "Many official Church dignitaries in Syria have been working with the secret service for years," he explains, adding that there are moments that are especially hard to stomach, for example Bashar al-Assad's appearance in Maalula on Easter Sunday 2014. 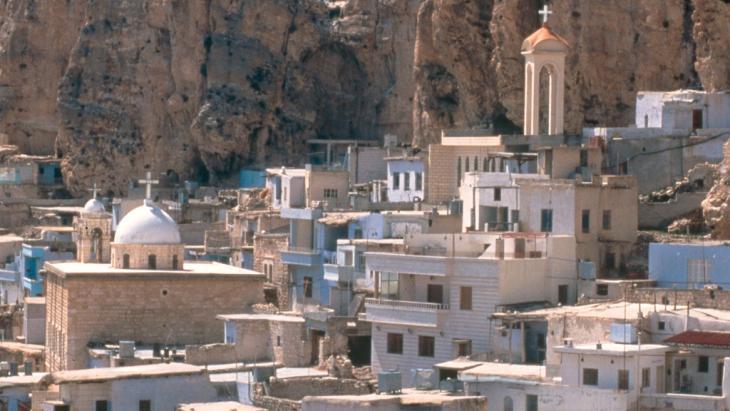 The majority of the residents of the town of Maalula, which is around 50 kilometres from Damascus, are Christians. Some of them still speak Aramaic, an ancient Semitic language. In September 2013, the town was seized by rebels, who were then driven out by Syrian army troops in April 2014

After the Syrian army had bombarded the Christian town for months and driven out the rebels, Bashar al-Assad travelled in person in a convoy of vehicles to Maalula. As the state-controlled television cameras rolled, the President held the rebels wholly responsible for the violence and presented himself as the protector of Christians. "It is galling to see the regime using the Christians in Maalula to shore up its power, while in many Syrian towns, women and children are being killed with TNT barrel bombs," says Khoury.

The Syrian journalist Samir Matar, who lives in Berlin and who, like Khoury, is a Christian, was also horrified at Assad's Easter visit to Maalula. But he was even more shocked at the coverage by a section of Germany's mainstream media, which assumed an uncritical stance on Assad's narrative, Matar told Qantara.de: "´Just a few days earlier, the UN had confirmed that the images of 11,000 torture victims in Syria were authentic. And despite this, we saw reports like this, which showed the regime in a positive light. I really can't fathom it," he said, shaking his head.

Before the start of the Syrian revolution in the year 2011, there were around two million Christians living in the country, which had a population of around 22.5 million. Today, it is estimated that half of these Christians now live in exile. They represent more than a dozen different Christian denominations.

This image of the Syrian regime as a champion of Christians, was also carefully tended by Hafez al-Assad, the father of the incumbent president. Christians who complied with the dictatorship enjoyed certain privileges, and in comparison with the rest of the region, the Syrian constitution afforded extensive rights to Christian minorities: among other things, the state paid for Christian religious education in schools.

But this did not mean that Christians enjoyed equal civil rights. In accordance with the constitution, the president of Syria must still be a Muslim. Moreover, anyone not explicitly submitting himself to the Assad regime risked his livelihood and his life – also as a Christian: "Some Church representatives were courageous and lived up to their responsibilities, but they were unfortunately suppressed by the regime," says journalist Samir Matar. 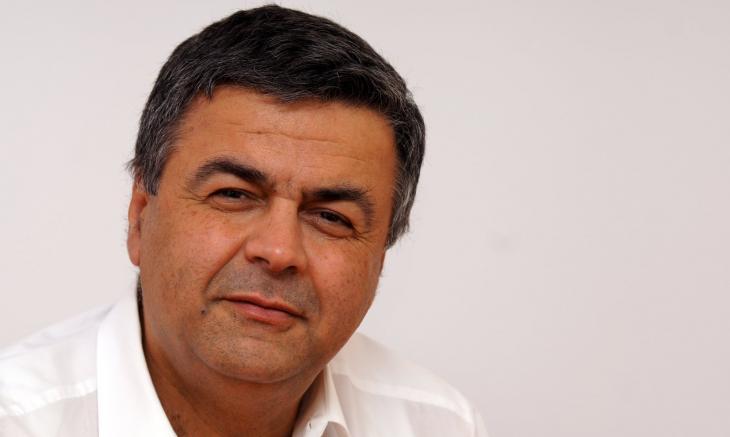 According to Dr Marwan Khoury (pictured here), the Assad regime has been exploiting Syrian Christians for a long time: "Many official Church dignitaries in Syria have been working with the secret service for years"

A short time later, Bashar al-Assad had the Italian Jesuit priest Paolo Dall'Oglio thrown out of the country – presumably because he had, among other things, taken part in the funeral service for Basil Shehade. Dall'Oglio, who was known for his social activism, then spent periods of time in rebel-held areas, where he is thought to have been abducted by the extremist group ISIS in 2013.

But despite all this, many Christians prefer to view the Assad regime as "the lesser evil". Father Jihad Nassif, a Maronite cleric from the Syrian port town of Lattakia who currently heads a Maronite community in Jordan, explained while attending a Konrad Adenauer Foundation conference in Germany in late 2013 that he would rather have the Assad dictatorship than radical Islamists: "Please let's not talk about toppling the regime. That's what's led to this catastrophe. It would be better to talk about regime development rather than regime change. I would rather put up with this government for another 20 years, than have this disaster in Syria," he said.

Faith in other viable alternatives

The brutal Assad regime on the one hand, and Islamist terrorism on the other – do the Syrian people really have no other choice? The doctor Marwan Khoury and the journalist Samir Matar hold a different view. They don't believe that Syrians are stuck between a rock and a hard place; they believe in other viable alternatives, and they are not alone.

In March 2014, more than 100 Syrian men and women signed their "Declaration of democratic Syrian Christians". Most of them live abroad, says the journalist Samir Matar. The call is also finding resonance among Christians living in Syria. But many are too afraid to express their views, he adds.

Samir Matar hopes that the declaration of democratic Syrian Christians will help to convey a realistic picture of the Assad dictatorship, instead of playing down its crimes. "We want people to know that Assad bears the primary responsibility for hundreds of thousands of deaths in Syria, and that he – just like Slobodan Milosevic before him – must be made to stand trial for his crimes against humanity at the International Court of Justice."

Home
Print
Newsletter
More on this topic
Syria: The Opposition and the Church: A Slap in the Face for the Pro-Democracy MovementInterview with Father Paolo Dall'Oglio: Hoping for a Victory without RevengeOriental Christians in Germany: Providing a Diplomatic Bridge
Related Topics
Alawites/Alawis, Assad regime, Christians in the Islamic world, Druze, Minorities in the Muslim world, Syrian Civil War, Syrian opposition
All Topics

Like Christianity, Europe's history is one of migration. Both have strong roots in the Orient and in cultures thousands of years old. Cultural historian Bernhard Braun invites us ... END_OF_DOCUMENT_TOKEN_TO_BE_REPLACED

The Women's Africa Cup this year in Morocco was a resounding success. The Moroccan team was the first Arab women's football team to qualify for a World Cup. By John Duerden END_OF_DOCUMENT_TOKEN_TO_BE_REPLACED

In this essay, renowned Lebanese journalist and writer Hazem Saghieh asks whether the Arab Levant, which stretches from Iraq in the east to Egypt in the west, will remain an ... END_OF_DOCUMENT_TOKEN_TO_BE_REPLACED

The Palestinian militant organisation Hamas, with Hezbollah's help, is building up a military presence in Lebanon, the ultimate consequences of which could be devastating, writes ... END_OF_DOCUMENT_TOKEN_TO_BE_REPLACED

Khaled Bahlawan hammers nails into a traditional wooden boat he built by hand, toiling under the scorching sun on Syria's Mediterranean coast to preserve a disappearing ancient ... END_OF_DOCUMENT_TOKEN_TO_BE_REPLACED

Comments for this article: "Assad is only protecting himself"

Participating in the revolution would mean standing a chance of influencing its outcome. Christian (and for that matter Alawite) communities largely haven't risen up against the regime because they are more afraid of the rebels. When the rebels have got fed up of waiting and taken over their areas for purely military reasons, there hasn't been any vengeance agaisnt the local population. But that depends on the goodwill of the mainly Sunni rebels who took over. It would have been far more sensible for these communties to arm themselves, establish self-government and negotiate with the other communities that have done the same. Then they would be (a) doing what the rebels want them to do anyway and (b) in a position to defend themselves if anyone on the rebel side decided to pick on them. The latter would surely rather have an armed and organised ally than an armed and organised enemy.

END_OF_DOCUMENT_TOKEN_TO_BE_REPLACED
Social media
and networks
Subscribe to our
newsletter