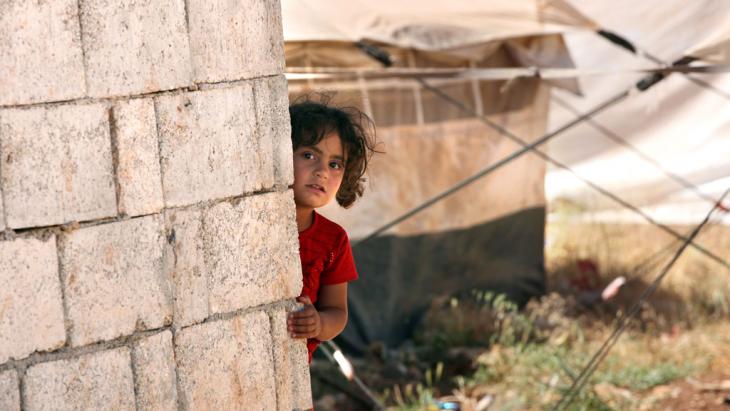 To date, 70,000 Palestinians have fled the civil war in Syria. Only Hamas in the Gaza Strip is welcoming them with open arms. Inge Günther reports from Gaza

Twelve-year-olds like Odai Abu Hassan usually love going on exciting trips – except, of course, when they have to dodge bombs on their way to the airport, which is what happened to Odai and his relatives in Damascus.

If the start of their journey was harrowing, the final stage of their escape from the Syrian Civil War was certainly not for the faint-hearted. After landing in Cairo and making an exhausting journey in a rickety taxi that rattled and bumped them across the Sinai, Odai, his brother and his aunt had to muster their last ounce of courage to crawl several kilometres through an airless tunnel to reach Gaza. When asked what it was like, Odai, a shy, slender boy whispers "terrible" before falling silent.

His aunt Amna relates all the dreadful things that Odai has experienced in his young life: the loss of his father, who died of a heart attack, and the departure of his mother, who left him and his brother Ahmed, four years his senior, to start a new life with another man. Then came the news of the death of his grandmother, who was killed by shell fire in Yarmouk, the largest Palestinian refugee camp in Syria. 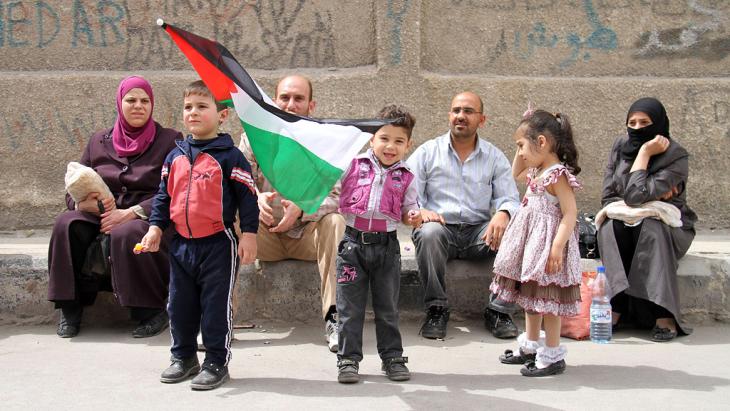 The Palestinian refugee camp of Yarmouk has been reduced to rubble. Ever since heavy fighting broke out last winter between Syrian rebels, who hid out in the refugee camp, and the troops of the Assad regime, most of Yarmouk's 160,000 inhabitants have fled

They all grew up in Yarmouk: Odai, Ahmed, Aunt Amna, and the other relatives who now share a cheap flat in an unfinished building in Rafah at the southern border of the Gaza Strip. Today, Yarmouk lies in ruins. Ever since heavy fighting broke out last winter between Syrian rebels, who hid out in the refugee camp, and the troops of the Assad regime, most of Yarmouk's 160,000 inhabitants have fled.

Refuge for the poorest of the poor

Only the poorest of the poor stayed behind. The situation in the other eight camps is barely any better; almost all of them have been turned into war zones. Half a million Palestinian refugees were registered in Syria. The United Nations Relief and Works Agency for Palestine Refugees (UNRWA) estimates that half of them no longer have a roof over their heads and that 70,000 Palestinians have fled Syria. Unlike Syrian civil war refugees, the Palestinian refugees are not welcome anywhere – except in Gaza.

Hamas is at least making a show of welcoming them with open arms. "Our brothers should feel at home here with us," said Ghazi Hamad, deputy foreign minister, setting the tone. Odai and the other refugee children are now attending school again. "The people are really nice; they don't have much, but they help us to the best of their ability," says 52-year-old Kamilia Abu Schkaim, who fled to Gaza with her six children in the summer of 2012 when the fighting started in Yarmouk. In her case it was easy: the Egyptians allowed them to cross the border to Rafah without asking too many questions. It's the same the world over: countries are quite happy to offload refugees onto other countries.

They were heading for Gaza because the UNRWA is active there, as it is in Jordan, Lebanon and Syria. The UNRWA gave them mattresses, blankets, saucepans and 125 dollars housing benefit per month. In short, they were given the bare necessities.

Nevertheless, Kamilia Abu Schkaim is having great difficulty adjusting to life in Rafah. She is an emancipated, divorced woman who worked as a journalist in Syria and likes to speak her mind. She is anything but an Islamist.

Gaza: the end of the line

She certainly doesn't want to complain; after all, Hamas got her a job in a hospital on a job creation scheme where she earns €180 a month. "It's just that everything is so foreign here," she says, "even the food is different." The irony is that she has never been closer to the old Palestinian homeland. The village from which her parents fled in 1948 – the year Israel declared independence and the year of al-nakba (Palestine's catastrophe) – is only a few kilometres away as the crow flies in the Negev, the desert bordering the Gaza Strip. She sighs: "Gaza is the end of the line for us." 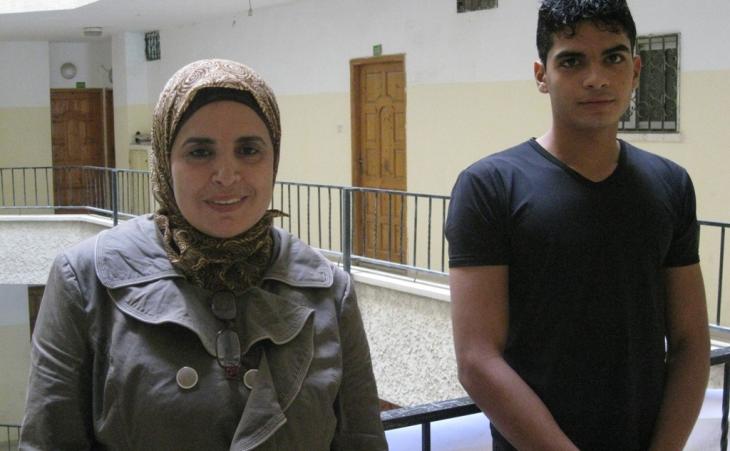 Kamilia Abu Schkaim (left), who was forced to flee the Yarmouk refugee camp in Damascus with her children in 2012 because of the fighting between rebels and Assad troops. She says that when the civil war in Syria is over, she will not stay another day in Gaza

Although the Gaza Strip is overpopulated and lacks supplies, the roughly one thousand Palestinians who have fled there from Syria are better off in Gaza than other Palestinian refugees elsewhere. Many of the 50,000 Palestinians who were able to flee the Syrian civil war to Lebanon don't know where to go. UNRWA staff report that the infamous Sabra and Shatila refugee camps are so catastrophically overcrowded that some dormitories have to be used in shifts.

The 9,000 Palestinians from Syria who made it across the Jordanian border are right at the bottom of the refugee hierarchy. They were not even admitted to the Zaatari refugee camp, where 120,000 Syrians currently live in tents; they were put in special separate camps that are even more restrictive. It is said that the Hashemite Kingdom of Jordan has even sent some Palestinian refugees back to Syria because it is worried about its "demographic balance".

The reality of life as a refugee

This raises the question as to why the moderate autonomous authority in Ramallah is not doing more to help these people. It at least says that it is willing to take them in. The authority says that it asked Israel to allow Palestinians from Syria over the Allenby Bridge into the West Bank, says Mohammed Shtayyeh, one of the peace negotiators. However, the Israelis only wanted to let these needy people pass if they agreed to officially renounce their refugee status. "We completely reject this condition," says Shtayyeh.

This is all about the so-called "right of return", one of the thorniest subjects in the Israeli-Palestinian conflict. Although everyone knows that there will only be a pragmatic solution and no mass return of people to Israel, no one dares to call the principle into question; not even when lives are at stake.

So far, 1,377 Palestinians have lost their lives in the Syrian civil war and dozens have drowned while attempting to make the crossing from Libya to Malta. The refugees from Syria who are stranded in Gaza also say that no one would accept Ramallah giving way to the Israelis on the subject of the right of return even though many refugees would benefit from an opening of the West Bank.

This ideologically charged debate completely ignores how individuals want to live their lives. "When the civil war is over and I have enough money for the tickets," says Odai's aunt, Amna Abu Hassan, "we have only one goal: to return to Syria. We were born there; we feel at home there." The feisty Kamilia Abu Schkaim puts it in more drastic terms: "When that time comes, I won't stay another day in Gaza."

Home
Print
Newsletter
More on this topic
Camps for Syrian Refugees in Zaatari and Atma: Cut off from the Rest of the WorldThe Domiz Refugee Camp in North Iraq: The Agony of the Syrian RefugeesSyrian Refugees: Driven out of Egypt
Related Topics
Arab Spring, Assad regime, Hamas, Policy on refugees and migration, Syrian Civil War
All Topics

In Jordan, members of civil society have set up the first shelter for women who are under threat of death from their own families. For one year now, such women have been able to ... END_OF_DOCUMENT_TOKEN_TO_BE_REPLACED

Basma, Jad and Ma'zooza are about to join the Sesame Street family. The trio of new Arabic-speaking characters will help teach children in the Middle East to read and write, as ... END_OF_DOCUMENT_TOKEN_TO_BE_REPLACED

Equality in divorce, a ban on polygamy: reformers of Islamic family law have a clear agenda. They are exploiting the ambiguity of traditional jurisprudence. By Joseph Croitoru END_OF_DOCUMENT_TOKEN_TO_BE_REPLACED

The stereotype of the oppressed Arab woman continues to dominate public discourse throughout Europe. Not only is this skewed image altering the perception of changing notions of ... END_OF_DOCUMENT_TOKEN_TO_BE_REPLACED
Author:
Inge Günther
Date:
Mail:
Send via mail