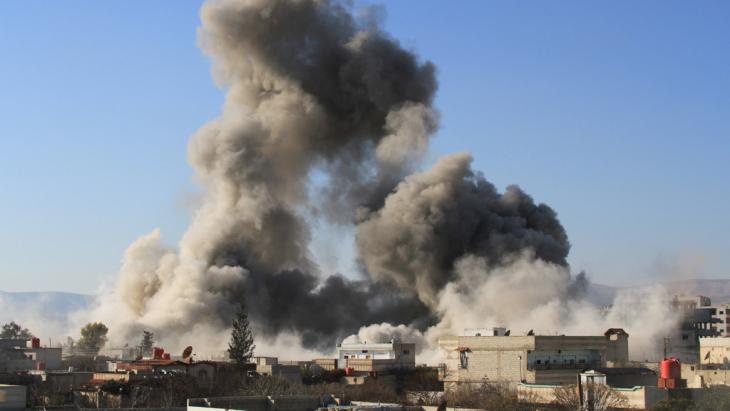 Syrian civil war
The end of a dream

In Daraya, a town southwest of Damascus, Assad has triumphed. After four years of continuous bombing and starvation, the last 8,000 residents have capitulated and agreed to be resettled by the regime. By Kristin Helberg

Before she got on the bus, Um Mayas paid one last visit to her husband's grave. He died in a barrel bombing in 2013 as a soldier of the Free Syrian Army. After stopping by the grave, Um Mayas, with tears running down her face, proceeded to burn all of her furniture so that the regime would not be able to sell it and then packed clothes for her two children. The 29-year-old Syrian woman tells the journalist from the website Syria Direct that the only thing her seven-year-old daughter wanted to take with her was her doll.

Now the three are sitting in an emergency shelter in the regime-controlled town of Harjaleh, 12 kilometres from home. Four-year-old Muadh tastes biscuits, chocolate and ice cream for the first time in his life – and the joyful astonishment on his face is her only comfort, says Um Mayas. The rebels and their families have been brought to the northern province of Idlib, dominated by the opposition.

Their hometown of Daraya is in ruins. Once home to 20,000 inhabitants, Daraya is the symbol par excellence of Syria's human drama. Because Daraya is famous. For its grapes and its revolutionaries, for massacres and surreal TV reports, for civil resistance, media-makers from the opposition, barrel bombs, hunger blockades and UN convoys that had to turn back. Now the town on the outskirts of Damascus stands for yet another chapter in this conflict: the surrender. The last 8,000 inhabitants – civilians and rebels alike – have left Daraya. Assad has triumphed.

And yet everything looked so promising five years ago. Daraya developed early on into a centre of peaceful protests and activists set up a local committee there, believing in the power of civil resistance. The 26-year-old Ghaith Matar became the icon of this movement, distributing flowers and water to Assad's soldiers and thus earning the title of "Syria's little Gandhi". But then, in early September 2011 – shortly before the birth of his first child – Matar was arrested by the regime's security forces and tortured to death. Western ambassadors attended his funeral and the EU spoke of a "further sign of the brutality with which the regime is responding to the legitimate demands of the Syrian people".

As the revolution became a nationwide military conflict, the Free Syrian Army set up operations in Daraya with 3,000 fighters, posing a threat to the regime's military airport in nearby Mezze – one of the reasons why Assad set out to reconquer the town at all costs. Daraya's armed groups had a good reputation among human rights activists, even as some of them took on an increasingly Islamist cast. 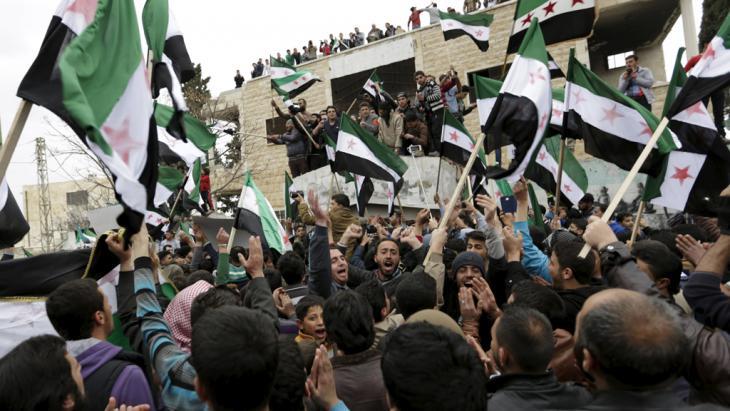 Nucleus of anti-Assad resistance: in 2011, as the Arab Spring reached Syria, Daraya was one of the first places to rise up against the leadership of President Bashar al-Assad. Subsequently the town was taken over by rebels of the Free Syrian Army

Bassam Ahmad from the Violations Documentation Centre (VDC) cannot recall a single case of war crimes perpetrated by the local rebels.  Nor did he hear of any arbitrary attacks on civilians in Daraya, says the former director of the VDC, who has been documenting the violent acts of all warring parties since 2011.

Daraya remains an impressive example of civilian resistance. In January 2012, activists there published the first issue of the weekly newspaper Enab Baladi ("Domestic Grapes"). It was compiled mostly by women and reached several hundred thousand readers every Sunday, both in printed and digital form, mainly through the social networks. The only time Enab Baladi did not come out was at the end of August 2012, when soldiers of the regime and shabiha militias entered the town. They went from door to door, executing the town's residents. Depending on the source, between 270 and 320 people died in this massacre.

Caught in a vice

The report on the massacre in Daraya broadcast by the television station Al-Dunya TV, which is loyal to Assad, is a particularly grotesque example of the regime's propaganda. On 25 August 2012, a female reporter from the station casually accompanied soldiers through Daraya and interviewed survivors, some of them severely wounded, about the "terrorists" responsible for the attack. One of those she spoke with was a small child who was evidently in shock, still lying in the arms of his dead mother.

In September 2012, the regime launched massive air strikes against Daraya and two months later it sealed off the town completely. For four long years, Daraya was starved out and bombed almost daily. The Syrian Network for Human Rights has documented the state-perpetrated terrorism in its own report: 7,864 barrel bombs, eight attacks with chemical weapons and three with cluster munitions and 56 vital civilian facilities hit. Residents tried to subsist on what grew amidst the rubble and on water in which they cooked spices or leaves. Nine people died of malnourishment and lack of medical care, including three children.

The world stood by and watched, although everyone knew what was happening in Daraya. Again and again, women and children appealed to the public for help on the Internet, most recently on 21 August with a missing person's report: "Has anyone seen the UN? Please help us find it!" 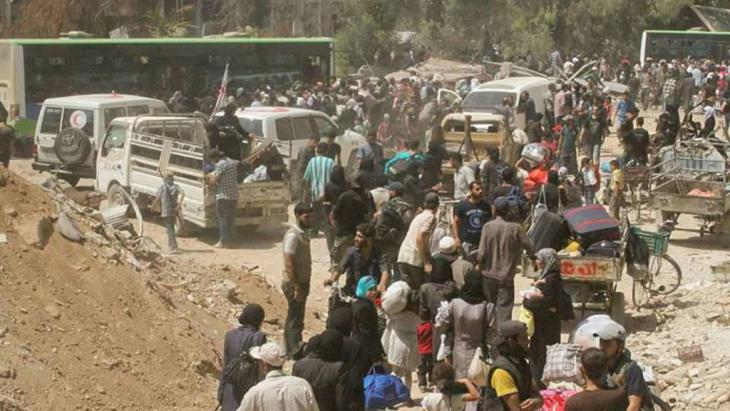 Fleeing chaos and repression: following a siege lasting four years, government troops have retaken control of the destroyed rebel stronghold of Daraya, not far from Damascus. The catastrophic humanitarian situation forced the rebels to agree to the Syrian regime′s plan to evacuate the town, whose residents were among the first to rise up against Assad in the spring of 2011. Thousands of residents have been relocated to reception camps under government control, while hundreds of rebel fighters and their families have been escorted to the rebel-held region of Idlib

The regime did not permit any humanitarian aid to enter Daraya for several years and without Assad's consent, the United Nations undertook nothing in Syria. When it finally received approval to send a convoy, the trucks were stopped at an army checkpoint on 12 May 2016 by the Fourth Division, an elite unit of Assad's army and had to turn around.

The people waiting on the other side were fired at, leaving a father and son dead. One month later, on 10 June 2016, the first and only relief shipment reached those under siege in Daraya. As soon as the trucks had left town, the bombing began again. Both incidents were documented by UN representatives and criticised. But Assad has been allowed to continue his actions with impunity. "Surrender or die" is his strategy and not only in Daraya.

According to Daraya's local council, the regime has begun using incendiary bombs during the past few weeks. Human Rights Watch has confirmed their deployment in the provinces of Aleppo and Idlib, with fields incinerated and the last remaining underground hospital destroyed on 19 August.

Daraya's residents were at the end of their rope. They accepted the regime's "evacuation plan", which in reality aims at the systematic expulsion of opponents of Assad. The regime is purging the reconquered areas by transporting critical inhabitants to regions under the control of the opposition and settling Assad supporters in their place. Because the UN is supporting this political purge disguised as humanitarian evacuation, Assad is sure to repeat the same process elsewhere.

Meanwhile, Daraya's inhabitants have lost everything. All that remains are the graves of their loved ones and a doll. Mayas left it behind to look after the house.

For a century, the Kurds and other minorities in Turkey have been subject to state repression. With his dissertation "The Kurdish Question in Turkey", political analyst Ismail ... END_OF_DOCUMENT_TOKEN_TO_BE_REPLACED

Syria, Egypt, Saudi Arabia and the UAE are among those countries increasingly misusing cybercrime legislation to silence dissent and curb freedom of speech. Could a new global ... END_OF_DOCUMENT_TOKEN_TO_BE_REPLACED

A new exhibition, "Syria – Against Forgetting", at Cologne’s Rautenstrauch-Joest-Museum focuses on Syria's artistic and cultural heritage and pays tribute to the country before ... END_OF_DOCUMENT_TOKEN_TO_BE_REPLACED

This year’s Morgenland Festival opened with the premiere of Kinan Azmeh’s musical theatre piece, “Songs for Days to Come”, based on fifteen poems by contemporary Syrian poets. ... END_OF_DOCUMENT_TOKEN_TO_BE_REPLACED

Longlisted for the 2020 International Prize for Arabic Fiction and now available in German translation, Khaled Khalifa’s novel “No One Prayed Over Their Graves” details lives and ... END_OF_DOCUMENT_TOKEN_TO_BE_REPLACED

Rumi's poems, though generally stripped of their Islamic symbolism, are hugely popular around the world. Yet Islamic mysticism is still very much at the heart of these verses. ... END_OF_DOCUMENT_TOKEN_TO_BE_REPLACED
Author:
Kristin Helberg
Date:
Mail:
Send via mail

END_OF_DOCUMENT_TOKEN_TO_BE_REPLACED
Social media
and networks
Subscribe to our
newsletter