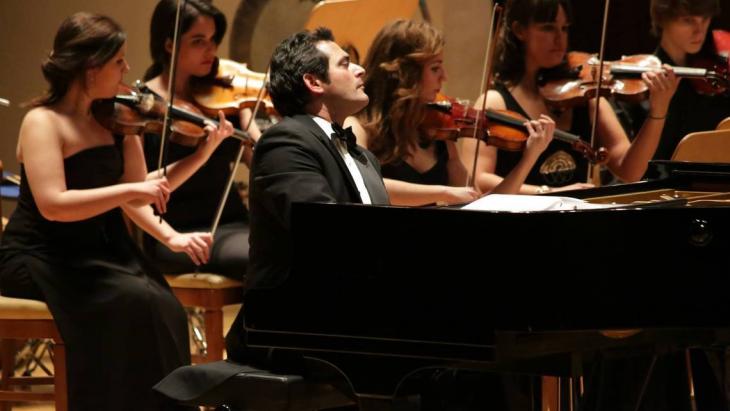 Over the course of the Syrian revolution, Malek Jandali has devoted much of his musical energies to supporting the people of Syria – and especially children – in their struggle for freedom. His latest album is part of his mission to save and express the rich musical heritage of his homeland. Exclusive interview for Qantara.de by Susannah Tarbush

Your new album makes for thrilling listening with its rich and epic sweep, memorable melodies, and endless variety of emotions. It draws both on Western classical traditions and on Syrian music – historical, classical, folklore, or even sung chants from the Syrian revolution. How do you go about composing and what Syrian sources inspired these latest compositions?

Malek Jandali: My process of composing major symphonic works always starts on the piano, where I experiment with motifs, rhythmic patterns, and ancient melodies from my rich Syrian heritage. Writing sketches is the next natural step in developing the main structure of my symphonies and concertos. The final stage in the process is “colouring” my musical canvases with orchestration, taking full advantage of the multi-faceted sounds and effects of a symphony orchestra. Once the composition is complete, it is time to prepare the score and parts for the conductor and the players to record the work and bring it to life. This is always an exciting moment, because this is the first time that I get to hear the music I have written.

Thanks to Syria's vast cultural heritage, I have no shortage of musical inspiration. The Vivace third movement of the piano concerto, for instance, is based on an ancient Syrian folk theme titled "The Dance of My Grandmother". The last track of the album, "Elegy", is inspired by an old "samaii" from Aleppo, and performed brilliantly by the Royal Philharmonic Orchestra in London, conducted by David Firman.

As the birthplace of music notation, Syria has gifted the world with musical treasures, and I feel it is my duty to preserve and present them on the world stage. Yet my main inspiration will always be the children in the refugee camps, and the chants of the people in the streets in their peaceful quest for freedom and dignity. 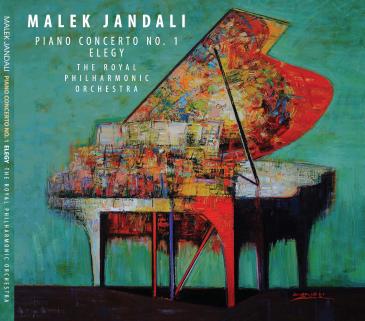 Malek Jandali: "Sharing culture and heritage builds bridges, which is essential in developing unity and understanding our shared common values. Indeed, the origin of the term 'symphony' in Latin means to 'sing together'. This is exactly what I am trying to achieve through my symphonic works: unity and peace"

This is your 11th album since your 2009 debut record "Echoes from Ugarit". Your works have been performed by numerous orchestras including, on this album, the Royal Philharmonic Orchestra in London and the Russian Philharmonic Orchestra. What is your view of the role and power of music in promoting peace?

Jandali: Music unites people and has the magical power to transcend all barriers. Sharing culture and heritage builds bridges, which is essential in developing unity and understanding our shared common values. Indeed, the origin of the term "symphony" in Greek means to "sing together". This is exactly what I am trying to achieve through my symphonic works: unity and peace.

All proceeds from the album will go towards supporting Syrian children in refugee camps. Where and when have you met Syrian children during the revolution, and how have you tried to help them?

Jandali: The Voice of the Free Syrian Children world tour was launched in the United States in 2013 and has since reached five continents; from Carnegie Hall to the Vienna Concert House, to the Sydney Opera House, where we not only shared our musical heritage, but told the stories of the Syrian children and gave them a voice to raise both awareness and much needed humanitarian aid.

I had the life changing experience of meeting Syrian children not only at various cities along the tour, but also at multiple camps, such as the Zaatari camp in Jordan, and relief sites on the Syrian-Turkish border. I held their hands in the train station and walked with them on their journey to exile along the Croatian-Bosnian border. Throughout the tour we were keen to serve by scheduling workshops, masterclasses, and donation drives, to help the children in any way possible.

The new album was commissioned by Queens University of Charlotte, North Carolina, your alma mater. You were recently appointed the first composer- in-residence at Queens, for a two year term. How do you plan to use your time there?

Jandali: Being named the first official composer-in-residence at Queens University of Charlotte is truly an honour and privilege. I am exceedingly grateful for this timely and meaningful partnership, and feel a big responsibility to not only represent my alma mater on the international stage, but also to continue writing and producing world class symphonic works that elevate the level of artistic excellence. One of the most important aspects of my residency is to engage students, and hopefully inspire them to search for their own identity and voice in the world, always in pursuit of our Queens motto: non ministrari sed ministrare, or "not to be served, but to serve".

Aside from the commissions from Queens University, I am currently working on a full-scale opera with a libretto inspired by the Arab Spring and Syrian Revolution, and collaborating with Marin Alsop – music director of the Baltimore Symphony and chief conductor of the Vienna Radio Symphony Orchestra – to record in Vienna my symphonic poem "The Silent Ocean" and "Symphony No. 6".

You have been the most outspoken Syrian musician on the international stage since the start of the revolution, when your performance in Washington of your song "Watani Ana" ("I am My Homeland")  led to the beating up of your parents by regime thugs in Homs and the destruction of the family home. In the years since, how have reactions been to your music and activism among Syrians inside and outside Syria?

Jandali: The outpouring of support I have received has been truly humbling. Travelling around the world and meeting Syrians who share their stories of how my music has helped them through the most difficult times in their lives just reinforces the power of music to cross all barriers. The story that affected me most was of a Syrian woman cramped in one of the dictator's prison cells. Before being dragged into the torture chamber, she would hum one of my works to give her strength to endure. There are no words to describe how this impacted the way I compose and think about music.

How have your activities and concert touring been affected by the coronavirus pandemic?

Jandali: Due to COVID, all stages and music festivals have been cancelled. Despite this, I am continuing my journey of composition and production with the hope of being back on stage very soon.

In 2015 you founded the Pianos for Peace organisation in Atlanta to build peace through music and education. It holds a yearly festival in Atlanta during which numerous colourfully painted pianos are placed on the streets for anyone to play. During the pandemic the organisation has had a COVID response programme. Do you hope that Pianos for Peace's colourful pianos will reappear annually on the streets of Atlanta and elsewhere, and perhaps even in Syria one day?

Jandali: Yes, of course. I am confident that the colourful Pianos for Peace will return to the streets of Atlanta, and we are in the process of expanding into other cities as well. In light of the coronavirus pandemic, we retooled our programming to include a virtual curriculum to keep students connected to the healing power of music. It would be a dream come true to have colourful Pianos for Peace on the streets of Syria one day. In the meanwhile, our healing arts programmes have been used by various refugee camps to help children begin the long and difficult journey of recovery through art and music.

The Malek Jandali International Youth Piano Competition for pianists up to 18 years old has been held annually since 2014, with the grand prize winner receiving a cash award, trophy and the opportunity to perform at Carnegie Hall in New York. Has the 2020 prize winner been announced, and is the programme continuing?

Jandali: The Malek Jandali International Youth Piano Competition is ongoing. The jury reserved their right not to award a winner in 2020, and we are currently preparing the announcement for the 2021 competition.

With authoritarianism once more gaining ground in the Middle East and North Africa, the European Council on Foreign Relations explores how European diplomats can be more effective ... END_OF_DOCUMENT_TOKEN_TO_BE_REPLACED

Winner of the Student Oscar: a little girl in a bombed-out flat in Syria. The television is her only window to the world – but even this is taken away from her. Nikolas Fischer ... END_OF_DOCUMENT_TOKEN_TO_BE_REPLACED

While Bashar al-Assad is still shunned by the West, which blames him for a decade of brutal war in Syria, a shift is under way in the Middle East, where Arab allies of the United ... END_OF_DOCUMENT_TOKEN_TO_BE_REPLACED

Western states have fought against terrorism not only in Afghanistan, but also in Syria and Iraq – leaving behind people who were once their partners in fear and poverty. Hisham A ... END_OF_DOCUMENT_TOKEN_TO_BE_REPLACED

Berlin's annual Human Rights Film Festival closed at the weekend. One entry to the festival was the documentary "Captains of Zaatari". Its Egyptian director Ali El Arabi focuses ... END_OF_DOCUMENT_TOKEN_TO_BE_REPLACED

"The people aren’t ready for democracy" has been the constitutional basis for Arab tyranny, its favourite slogan and its sacred narrative for more than a century. Yet, asks Khaled ... END_OF_DOCUMENT_TOKEN_TO_BE_REPLACED
Author:
Susannah Tarbush
Date:
Mail:
Send via mail

END_OF_DOCUMENT_TOKEN_TO_BE_REPLACED
Social media
and networks
Subscribe to our
newsletter