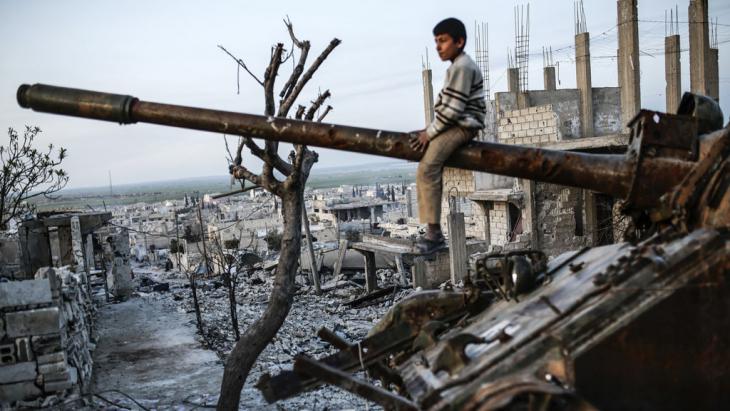 Syrian conflict
Everyone against everyone

Rather than being concerned with the fate of the Syrian people, the Geneva peace talks mainly focus on the interests of the two superpowers Russia and the US, writes Islam scholar and sociologist Huda Zein

Neither the suffering of the civilian population nor the political goals of the opposition, which are increasingly hamstrung, can be said to be dominating peace talks in Geneva. Yet who is responsible for the current chaotic state of affairs?

Who is financing the war in Syria, which has not only led to the disintegration of its state structures but also to the collapse of its economic infrastructure? Who controls the numerous local rebel groups? Who is monitoring Syrian airspace? Who decides which of the various actors are supplied with weapons? Is Syria now under a post-colonial occupation and does this mean a radical change in global policy?

The Assad dictatorship is conducting an outright campaign of annihilation against its own population. All those countries influencing the course of events in Syria are following the logic of their own interests, first and foremost Russia and the US. It is no secret that numerous regional and international powers are supporting one or several conflict parties with varying degrees of intensity.

Other than the Assad regime, the US and Russia are the only powers capable of intervening in the air war to influence the situation on the ground in their favour. In doing so, they repeatedly manage to establish a balance of power between the many warring factions: the Assad regime, Free Syrian Army, armed Islamic and Islamist groups, IS and Kurdish troops.

IS spawned by Assad′s tyranny

In the process, the US is pulling the strings behind the scenes in Syria and getting other actors to carry out its goals, while Russia blatantly maintains its support for the Assad regime. Iranian militias and Hezbollah have sided with Assad and are using brutal methods to fight the Syrian resistance. The emergence of jihadist groups and the so-called "Islamic State" in Syria is the direct result of such radical and consistent attempts to stamp out the Syrian resistance. 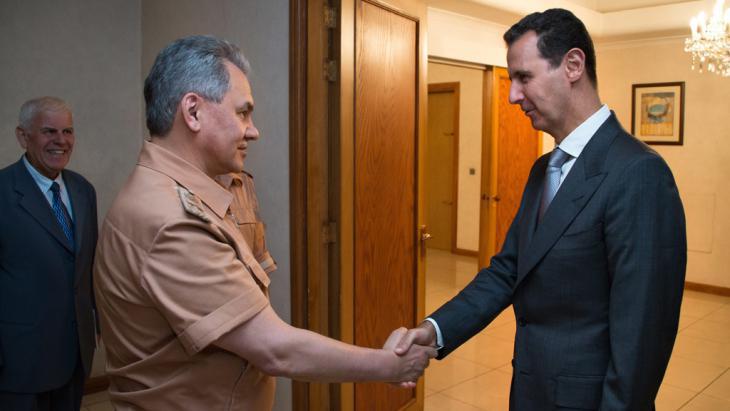 Russian-Syrian entente: Bashar al-Assad receives Russian Defence Minister Sergei Shoigu in Damascus. Russia has been fighting in Syria since September 2015 and is one of the closest allies of the Assad regime. The West is critical of the intervention. Syrian activists repeatedly accuse Russian forces of not only attacking terror groups such as IS, but also moderate opposition fighters and civilians

A vacuum has arisen between the interests of the US and those of the regime supported by Russia, a vacuum in which the terrorist organisation "Islamic State" has been able to evolve. Its existence is being used as a pretext by both the Assad regime and Western nations to intervene in the fighting to further their own interests.

The tyranny of Assad will always give rise to extremist violence, whether it is called "Islamic State" or known by another name. Western societies are increasingly equating the terror of the Assad regime with that of "Islamic State", even going so far as to describe Assad as the evidently lesser evil. This despite the fact that Assad has killed a quarter of a million Syrians with barrel bombs and chemical weapons alone, while IS has between 10,000 and 20,000 people on its conscience (exact figures are not known). In addition, the deployment of Assad's air force and the besieging of cities by government troops have driven several million Syrians from their homes. It is terrifying how the deeds of the man who is currently the world's most brutal mass murderer are being relativised and how the focus is increasingly on the crimes of "Islamic State".

That is why we need to remember how the Syrian war started. Since the beginning of the rebellion against the Assad dictatorship in early 2011, no day has passed without deaths and injury. In the five years since, developments have been thick and fast: the peaceful revolution became an armed battle, taking the conflict beyond the confines of Syria. We saw massacres and the deployment of chemical weapons by the Assad system; torture and murder were systematically planned by Assad's central security authority. Then came the rise of IS, as well as US air attacks against the jihadists and more fighting. Russians, Americans, Iranians, Lebanese and French nationals intervened in the conflict and jihadists from a wide range of countries joined various rebel groups, which has considerably weakened the Free Syrian Army.

Those nations intervening in the conflict from outside are not concerned with protecting the Syrian population or supporting their uprising against the Assad regime. Nor are they concerned with putting an end to the horrifying extent of Assad's violence and his unimaginable policy of destruction. They are solely concerned with money, power, influence and the control of global energy markets. These foreign interests are, together with the policies of Assad, playing their part in crushing the revolution begun by the Syrian people. 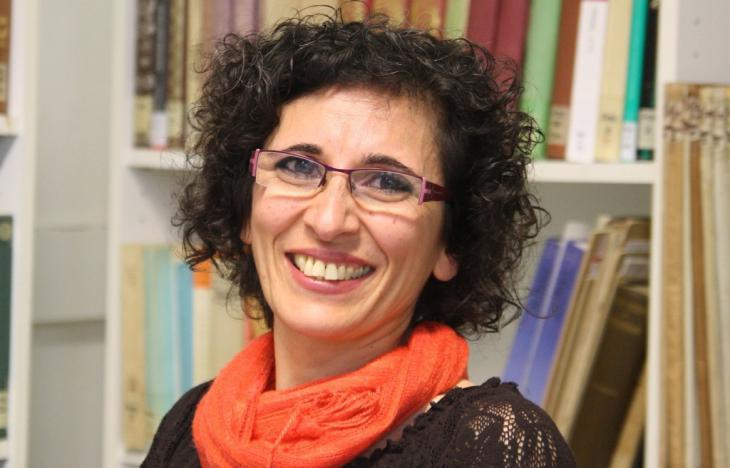 "Those nations intervening in the conflict from outside are not concerned with protecting the Syrian population or supporting their uprising against the Assad regime," criticises Huda Zein. "They are solely concerned with money, power, influence and the control of global energy markets"

What other explanation can there be for the fact that up to now, neither the US nor Russia has put up any credible fight against Islamic State? In 2014, for example, the US gave massive military support to the armed Kurds in the city of Ain al-Arab (Kobani), thereby conducting efficient strikes against IS. When IS troops attacked the city on 15 September, the US air force carried out strikes on IS positions there a short time later, on 24 September.

But when the city of Palmyra was captured by IS in late May 2015, jihadist units – that had advanced some 200 kilometres from Deir ez-Zor to Palmyra through uninhabited desert – were not attacked by either the Assad regime or by the US-led alliance. The same scenario was repeated during the withdrawal of IS troops from Palmyra through the desert towards Raqqa and Deir ez-Zor. IS troops were left to pull out undisturbed, by both Assad's air force, the US and Russia.

In Syria, Russia has not focused its sights on IS, but primarily all other armed groups and is attempting to rupture the social structure in cities where resistance is strong. Neo-colonial Russia is assisting Assad's tyrants and intervening in the purported fight against IS to position itself as an international actor in the wake of the Ukraine crisis.

The logical outcome of such global policy is the continuation of the war. It is not possible to regard IS independently of Assad's institutional violence and the actions of Russia and the US. Assad and international policy are making the war in Syria inevitable.

It must thereby be borne in mind that this war is not only destroying the infrastructure in Syria, but also all future perspective for society and generations to come. The uprising of the Syrian people against the barbaric regime has become a global war of annihilation by everyone against everyone. In the process, the Syrian population is being used as a bargaining chip. They face many arduous years in which they must fight for their survival, their freedom and justice. Yet history will ultimately reveal who was responsible for the destruction of Syria.

Huda Zein teaches at the Department of Oriental Studies at Cologne University.

Since Ali Khamenei, Iran's most powerful man, has openly and unconditionally come out in support of Putin's war in Ukraine, logistical help is on its way, with an allegedly ... END_OF_DOCUMENT_TOKEN_TO_BE_REPLACED

The Palestinian militant organisation Hamas, with Hezbollah's help, is building up a military presence in Lebanon, the ultimate consequences of which could be devastating, writes ... END_OF_DOCUMENT_TOKEN_TO_BE_REPLACED

In this essay, renowned Lebanese journalist and writer Hazem Saghieh asks whether the Arab Levant, which stretches from Iraq in the east to Egypt in the west, will remain an ... END_OF_DOCUMENT_TOKEN_TO_BE_REPLACED

Khaled Bahlawan hammers nails into a traditional wooden boat he built by hand, toiling under the scorching sun on Syria's Mediterranean coast to preserve a disappearing ancient ... END_OF_DOCUMENT_TOKEN_TO_BE_REPLACED

"Flugt" is the world's first museum dedicated to the stories of those forced to flee. The new museum, which focuses on the fates of refugees then and now, is housed in a former ... END_OF_DOCUMENT_TOKEN_TO_BE_REPLACED

"Finding Home", the second album by Syrian-born, UK-based musician Maya Youssef, works through feelings of loss and destruction until its music reaches a place beyond war and ... END_OF_DOCUMENT_TOKEN_TO_BE_REPLACED

Comments for this article: Everyone against everyone

One has to get all the facts in order to make a good picture of what is happening.
There is evidence that some of the fighting was started by other people and government young men and soldiers had to defend themselves this evidence and the use of toxic gasses is very solid. Other people wanted to get rid of the Syrian government for their own gains and invested many billions for this.

END_OF_DOCUMENT_TOKEN_TO_BE_REPLACED
Social media
and networks
Subscribe to our
newsletter