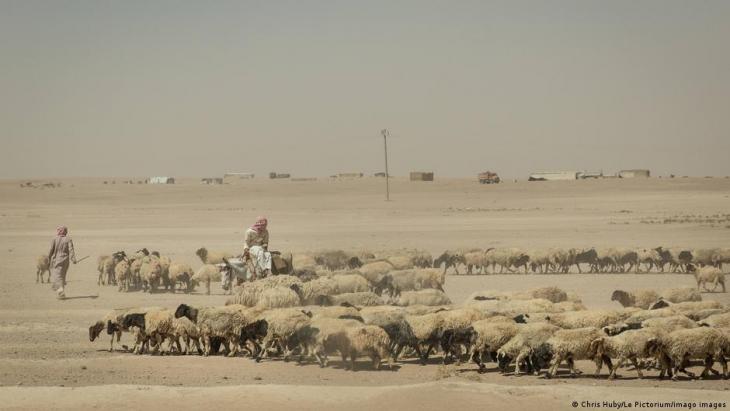 Researchers agree that climate change alone cannot be blamed for the outbreak of war in Syria in 2011. However, neither can it be ignored as a reason this once blossoming country has become parched and war-torn. By Jennifer Holleis

"Syria serves as a prime example for the impact of climate change on pre-existing issues such as political instability, poverty and scarce resources," says Jamal Saghir, professor at the Institute for the Study of International Development at McGill University. Saghir, a former director at the World Bank, considers climate change the world's biggest threat to security. He therefore sees the recent acknowledgment of climate change as a national security issue by US Secretary of Defense, Lloyd J. Austin III, on 27 January, as a game changer when it comes to recognising the link between climate change and conflict.

The dire case of Syria

In the past, Syria's farmers have benefited from relatively fertile and productive lands, as well as the state's promotion of staple crop production between the 1970s and 1990s. The country of around 17 million people has been hit by three droughts since the 1980s. The most recent stretched from 2006 to 2010, and was recorded as the worst multi-year drought in around 900 years.

Decreased precipitation combined with rising temperatures resulted in desertification and devastation of agricultural land, particularly in eastern Syria. Along with this, 800,000 people lost their income and 85 per cent of the country's livestock died. 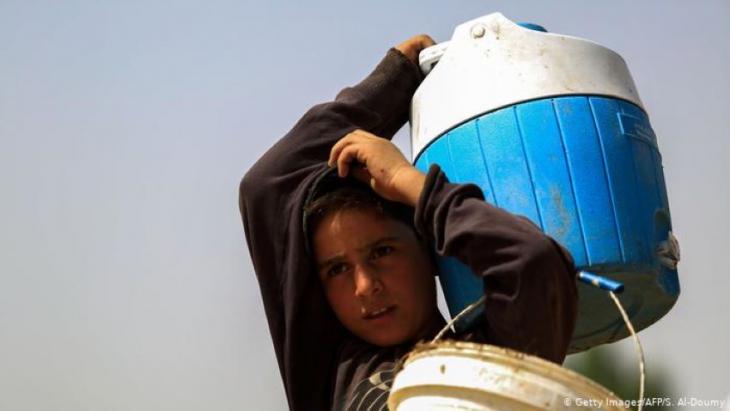 The UN Refugee Agency (UNHCR) and the UN Office for the Coordination of Humanitarian Affairs (OCHA) say that in 2019, about 82,500 people returned to Syria and about 412,000 internally displaced people returned to their places of origin. Conditions in Syria nevertheless remain precarious: many regions in Syria have no access to running water, and distribution is even more difficult in the North-Eeast due to conflicting political responsibilities. Pictured here: a Syrian boy carries water in a container

Since crop yields had also plummeted by up to two-thirds, the country had to start importing large quantities of grain. Consequently, food prices doubled. "But the drought still continued and people were hopeless," Saghir said, thus explaining why 1.5 million rural workers headed to the cities for work. Those who stayed were mainly impoverished farmers who became easy targets for terrorist recruiters from groups like the so-called "Islamic State" (IS).

A state on the brink of collapse

"Climate disruption was an amplifier and multiplier of the political crisis that was building up in Syria," says Staffan de Mistura, former UN Special Envoy for Syria between 2014 and 2018. The crisis was aggravated by Bashar Assad's decisions to reduce fuel, water and food subsidies over the years. In addition to water scarcity in rural areas, tensions rose between Kurds, Arabs, Alawites and Sunnis.

"A toxic cocktail started to turn into an explosive mixture with the ingredients of the Arab Spring, the anger of losing jobs, migration to cities, as well as the purchasing power decline and the anger against the very tough and very cruel reactions by the government," de Mistura said.

Geopolitically, the situation didn't become any easier with ongoing competition over Syria between archenemies Iran and Saudi Arabia. "We started seeing horrible medieval sieges around many cities or villages when people were cut off from food and water, like in Homs or Aleppo," de Mistura remembered. 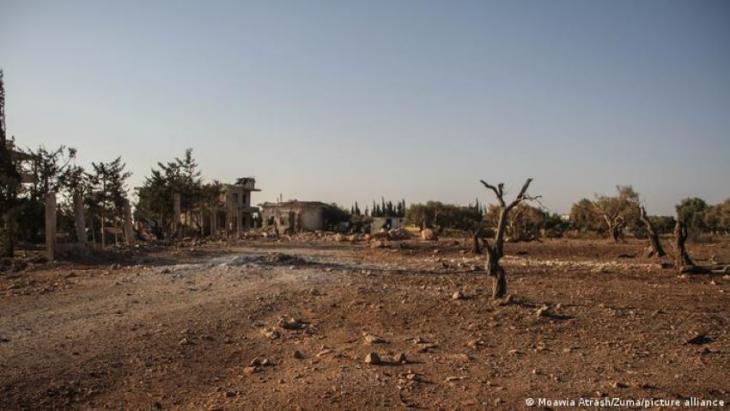 "A toxic cocktail started to turn into an explosive mixture with the ingredients of the Arab Spring, the anger of losing jobs, migration to cities, as well as the purchasing power decline and the anger against the very tough and very cruel reactions by the government," says Staffan de Mistura, former UN Special Envoy for Syria between 2014 and 2018. Pictured here, the city of Binnish in north-western Syria has been devastated by a deadly combination of war and drought

Though the UN Refugee Agency (UNHCR) and the United Nations Office for the Coordination of Humanitarian Affairs (OCHA) say that in 2019 around 82,500 people returned to Syria, and around 412,000 internally displaced people returned to their places of origin, problematic living conditions haven't improved. Vast parts of the country have been devastated by war, water remains scarce and infrastructure is in dire need repair across almost the entire country.

"Assad has almost won the territorial war but is still very far from winning peace," said de Mistura at an online conference hosted by Berghof Foundation and the Potsdam Institute for Climate Impact Research (PIK). Former World Bank director Jamal Saghir agrees: "For peace, you need reconstruction," he said and added that any peace agreement needs to be backed by an investment package.

However, Syria itself won't be able to finance its reconstruction and it remains to be seen if either of its allies, Russia or Turkey, will be willing to invest in Syria's future.

According to Saghir, it is obvious what needs to be done: "It is imperative to make Syria more resilient by helping transitioning the region to a more energy and water-secure infrastructure."

The USA and NATO plan to withdraw from Afghanistan by September. The operation is risky, the outcome uncertain. Many Afghans fear civil war. The quake on the Hindu Kush will also ... END_OF_DOCUMENT_TOKEN_TO_BE_REPLACED

The Prophet Muhammad never executed anyone for apostasy, nor encouraged his followers to do so. Nor is criminalising sacrilege based on Islam’s main sacred text, the Koran. In ... END_OF_DOCUMENT_TOKEN_TO_BE_REPLACED

Surging coronavirus cases in many parts of the world have overshadowed the start of this year's Muslim holy month of Ramadan, with festivities once again curtailed by contagion ... END_OF_DOCUMENT_TOKEN_TO_BE_REPLACED

German Middle East analyst Guido Steinberg and television journalist Ulrich Tilgner have both published new books on the conflicts in the Middle East. Their analyses and their ... END_OF_DOCUMENT_TOKEN_TO_BE_REPLACED

On 27 March, Iran and China signed a 25-year accord intended to foster "strategic co-operation". Despite ongoing uncertainty over the deal's actual scope, content and chances of ... END_OF_DOCUMENT_TOKEN_TO_BE_REPLACED

END_OF_DOCUMENT_TOKEN_TO_BE_REPLACED
Social media
and networks
Subscribe to our
newsletter