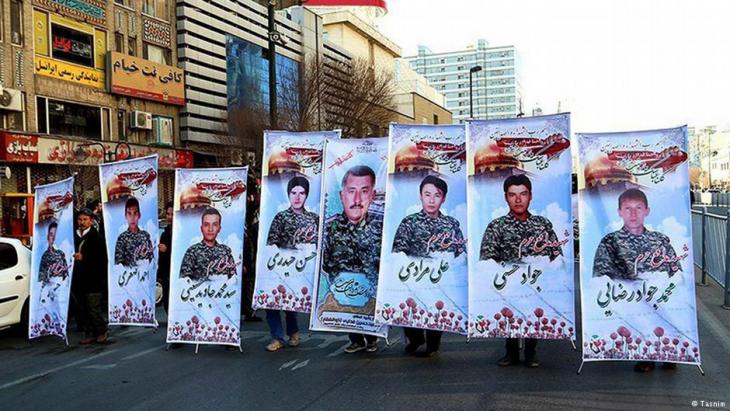 Syrian conflict
The price of acceptance

Allied to the Assad regime in the Syrian conflict, Iran has been luring its Afghan refugee population to sign up for the war with promises of high wages and residence permits for their families. By Shabnam von Hein

When soldiers from Iran die fighting in Syria, they are hailed as martyrs by the Iranian authorities. "The country owes much to them," stressed the director of the Foundation of Martyrs and Veterans Affairs, Mohammad-Ali Shahidi. On Tuesday, he officially announced that over 1,000 fighters from Iran have fallen in the Syrian civil war. He said they were soldiers in the Fatemiyon division, now revered as defenders of holy sites. Iran views the Sayyidah Zaynab shrine in Damascus, dedicated to the granddaughter of the prophet Muhammad, as an important place of pilgrimage for Shia Muslims.

The army division named after Fatemiyon, the daughter of the prophet of Islam, is mostly made up of Afghan fighters. Fatemiyon belongs to the Iranian Quds Force, the elite unit of the Iranian Revolutionary Guard that is deployed in special operations outside Iran.

"Many refugees from Afghanistan have been recruited and have travelled to Syria because they either need money or a residence permit – or both," said Kamal in interview. "But many of them have lost their lives in Syria." Almost 30 years ago, Kamal himself fled from Afghanistan to Iran. He lives in southern Iran with his wife and three children, but he still does not feel integrated into Iranian society. His children, who only know Iran, do not even have Iranian citizenship. They are still regarded as unwanted refugees.

According the UN refugee agency UNHCR, some three million Afghans currently reside in Iran. Nearly a million of them are registered refugees. Almost 500,000 of them are immigrants with temporary residence and restricted work permits. The other one and half million have no documents and are considered illegal immigrants.

They do not trust the authorities. They fear that they will be sent back or be put in a refugee camp. They go into hiding and are treated as second-class human beings, often subject to exploitation.

"I was a small child when my family fled from Afghanistan 36 years ago. I myself have four children now. We have been living in Iran for three generations, but none of us has papers," said Fatemeh. She lives on the outskirts of Tehran. "We are not allowed to own anything, not even a SIM card." However, she does not want to send her son to war, despite the fact that it would bring many benefits to the entire family.

Compensation for those left behind

When eligible Afghan men sign up for combat in Syria, they are paid almost 500 US dollars a month, say the refugees. They are promised basic schooling or a university education and better living conditions for their families. 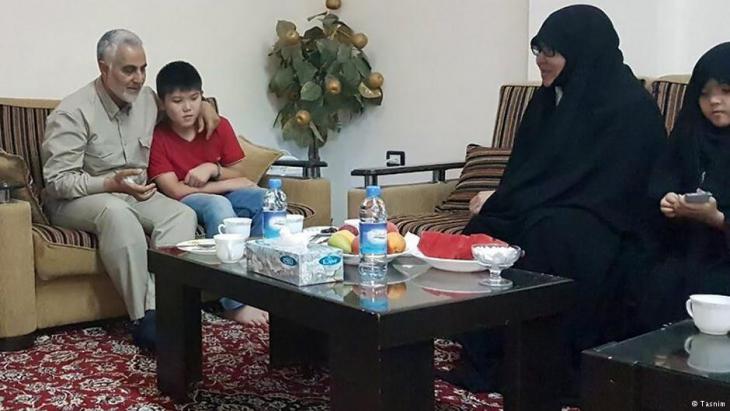 A consummate media professional: Major General Soleimani, commander of the Iranian Quds Force, makes a point of visiting the families left behind by fallen Afghans, posing for pictures with their children

At the beginning of May 2016, Iranian parliament passed a law guaranteeing Iranian citizenship for surviving relatives of Fatemiyon division fighters in the event of their death. Thus, families of killed Afghans would be placed under the patronage of the powerful martyr foundation, founded in 1980, a year after the Islamic Revolution. The foundation takes care of the survivors of the many people killed in the revolution and soldiers who died in the Iran/Iraq War.

The Martyr Foundation has gained greatly in importance over the past 36 years, becoming one of the most influential institutions of the Islamic republic. It owns a large number of companies and is active in all major business sectors: production, trade, oil, mining, the automotive industry and even tourism. Anyone under the protective hand of the Martyr Foundation is on the safe side of society and receives due recognition.

According to reports by conservative Iranian media outlets, the Fatemiyon division has almost 20,000 fighters. Not only does it defend holy sites in Syria but, as General Qassem Soleimain, commander of the Iranian Quds Force explains, "It defends the Islamic Republic of Iran and its ideals. The Islamic State terror group was established to limit Iran's influence in the region and to harm us.″

Education for girls and women is still possible in Afghanistan, says Reinhard Eroes of the Kinderhilfe Afghanistan initiative. In interview with Elisa Rheinheimer, he talks about ... END_OF_DOCUMENT_TOKEN_TO_BE_REPLACED

A lawmaker in Pakistan's rugged northwest was sipping tea with voters when his phone chirped to life – the Taliban were calling with a demand for 'donations'. "We hope you won't ... END_OF_DOCUMENT_TOKEN_TO_BE_REPLACED

Cries of "Benghazi!" still resonate across the USA ten years after a deadly terrorist attack in Libya killed the U.S. ambassador and three other Americans. Ethan Chorin re-tells ... END_OF_DOCUMENT_TOKEN_TO_BE_REPLACED

Sufism has fluid boundaries. Just like Islam, Sufism is inconceivable without its late antique roots. Then again, it has also exerted an influence on Hinduism. Moreover, the Sufic ... END_OF_DOCUMENT_TOKEN_TO_BE_REPLACED

Journalist Waslat Hasrat-Nazimi was forced to flee Afghanistan with her family as a child and grew up in Germany. To mark the publication of her book "The Lionesses of Afghanistan ... END_OF_DOCUMENT_TOKEN_TO_BE_REPLACED

Just as the Islamic Revolution fundamentally changed Iran 43 years ago and had an impact far beyond the country's borders, the current wave of protests sweeping the country is set ... END_OF_DOCUMENT_TOKEN_TO_BE_REPLACED
Date:
Mail:
Send via mail

END_OF_DOCUMENT_TOKEN_TO_BE_REPLACED
Social media
and networks
Subscribe to our
newsletter