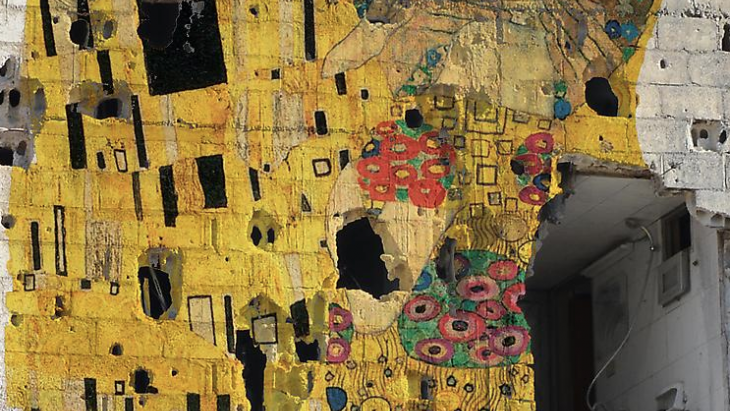 Syrian painter and digital artist Tammam Azzam
"I, the Syrian"

"I, the Syrian" is the title of an exhibition by Tammam Azzam that was held in Beirut and London in early 2014. Selected works from his project now feature in various international art exhibits. Martina Sabra met and spoke with the Syrian painter and digital artist in Beirut

Gustav Klimt's famous painting "The Kiss" gushes forth in luminous gold and yellow over the grey and black, bullet-riddled façade of a former apartment building in Damascus. Earlier this year, the image circulated worldwide on the news and microblogging service Twitter under the title "Freedom Graffiti".

At the time, many believed that someone had actually painted the provocative kiss scene on the walls of a residential street in Syria. However, what people were really seeing was a photomontage created by the Syrian artist Tammam Azzam. "Freedom Graffiti” is part of his long-term project, the "Syrian Museum".

While studying art in Damascus, Tammam Azzam, who was born in 1980, specialised in painting. "In recent years, I have tried out many new techniques. Among other things, I experimented with found objects. But I still prefer working with acrylic or oil paint on canvas," says the reserved artist.

The Syrian Revolution turned Tammam Azzam's life and work completely upside down. Only a few weeks after the start of the Syrian Revolution in early 2011, he received his conscription notice, ordering him to join the regular Syrian army. At the time, the artist lived and worked in Damascus.

"It was immediately clear to me that joining the army was not an option," says Azzam, whose family comes from Suweida in south-west Syria and belongs to the Druze religious community. "I didn't want to have to shoot at my compatriots." Azzam left for Dubai and decided to settle there for the time being. "It wasn't easy. Overnight I lost my atelier and had no materials to work with, simply nothing. But I absolutely wanted to continue pursuing art. So I ended up using the materials that were available: a computer and digital images." 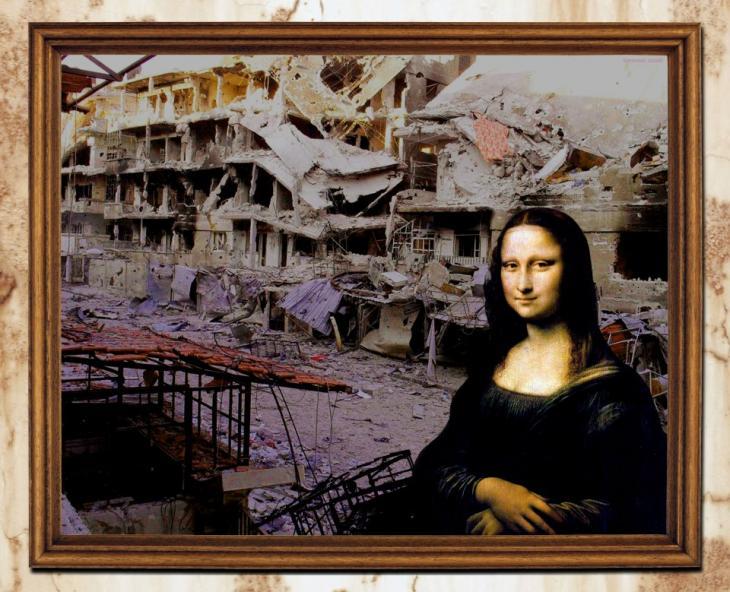 Maximum creativity meets maximum destruction: in this work, Tammam Azzam juxtaposes the enigmatic smile of the Mona Lisa with the horrendous destruction of the Syrian Civil War

Since his relocation to Dubai, Tammam Azzam has produced digital collages and graphic works, which brought him international fame far beyond the borders of the Arab world within a very short time. In particular, the series of digital artworks he has been working on since 2012 entitled "Syrian Museum" has attracted global attention.

The constantly recurring theme of this series is that of destroyed Syrian houses, places that at one time offered shelter, warmth and intimacy. Now, they lie in ruins, their walls cracked and ripped open; their interiors visible to anyone passing by.

Tammam Azzam superimposes high-contrast, colourful details from world-renowned paintings over the black, white and grey photos of these ruins. Matisse's famous orange and red figures dance in an oval formation on top of piles of rubble; Gauguin's South Sea beauties sit in a refugee camp, looking pensively around them; Mona Lisa smiles amid the nightmare of devastation.

A feeling of absolute powerlessness

Is this a case of maximum creativity meets maximum destruction? "Perhaps," says Tammam Azzam. "It depends on your point of view." The artist wants to convey reality as he sees it, without providing any explanation. "Yes, I am Syrian, but I am not anyone's mouthpiece. I speak only for myself as an artist. I want the viewer to be irritated and to ask questions. Perhaps these colourful façades really do exist somewhere! And what was Syria actually like before the war? We shouldn't be allowed to forget that Syria possessed an immense cultural heritage, which has since been either partially destroyed or faces imminent destruction."

At least Tammam Azzam and his family have found a safe place to live and work in Dubai. Yet the destruction and the millions of people suffering in Syria are ever present in their minds, and with them the ensuing feeling of absolute powerlessness.

"I have become an internationally renowned artist because of the Syrian Revolution. The relationship between Western and Arab artists has, as a whole, improved considerably following the so-called Arab Spring. People now take notice of us," says the artist with conviction. "Ultimately, however, we artists are powerless. Fine, I am creating something and making an artistic statement, but that changes absolutely nothing for the people in Syria." 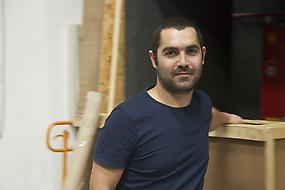 Tammam Azzam and his family fled to Dubai, where he now lives and works. Yet despite the distance separating him from his native home, the suffering of the millions still living in Syria never leaves him

Sometimes he feels paralysed by the situation. "How can you occupy yourself with art when more than 200 people are killed in a single day in Syria? As artists, we are supposed to challenge reality, but in light of current events and politics, art doesn't stand a chance."

Nevertheless, he wants to adopt a position, explains Tammam Azzam. Another series of photomontages, which also belongs to the "Syrian Museum" series, portrays a torn, isolated and bombed-out Syrian building far removed from its original context. The building is held aloft high in the air by a huge, colourful bunch of balloons. This imposing ruin hovers both threateningly and surreally over the Houses of Parliament in London. At other times, it can be seen suspended above the destroyed Twin Towers in New York.

"Despair is the only truth"

"If the world refuses to come to Syria to see what is going on there, then Syria has to come to the world," says Tammam Azzam. "Many people in Syria no longer have a place to which they can return. It is not only that their former homes lie in ruins, the town or city in which the building stood has been wiped from the map. They only still exist in our imagination."

Tammam Azzam's collages are multi-facetted and profound. If the viewers look closely, they will recognise that even the international centres of power are under threat of destruction. "The world's major powers have missed one opportunity after another to stop the killing in Syria," asserts Tammam Azzam. "They find themselves in a deep moral crisis."

What does the artist think about a possible rebuilding of Syria? Tammam Azzam shakes his head. At present, he can see no end to the fighting and no grounds for optimism or confidence. "Despair is the only truth."

"I, the Syrian" was on show in London and in Lebanon in early 2014 as a solo exhibition project. Until the summer of 2014, Tammam Azzam will be showing individual works from the project as part of exhibitions in North America, Asia and Europe. After he has set up a new atelier in Dubai, he plans to once again devote more time to painting.

Martina Sabra
© Qantara.de 2014
Translated from the German by John Bergeron
Editor: Aingeal Flanagan/Qantara.de
For more information on Tammam Azzam and other art and culture from Syria, visit the multilingual website Creative Memory of the Syrian Revolution, which is supported by the Friedrich-Ebert-Stiftung and the French Cultural Institute in Beirut.

Past attempts to reconcile logic and belief within Islam tend to be dismissed today – not because they lack merit, but because they were politically defeated, argues Mustafa Akyol END_OF_DOCUMENT_TOKEN_TO_BE_REPLACED

November 2022 sees the Arab world firmly in the spotlight with the COP27 in Egypt and the FIFA World Cup in Qatar. Public trust in MENA governments is weak, thanks to their ... END_OF_DOCUMENT_TOKEN_TO_BE_REPLACED

Thanks to climate change, the Middle East is heating up faster than any other part of the world, putting the region's ancient pyramids, castles, holy and other heritage sites at ... END_OF_DOCUMENT_TOKEN_TO_BE_REPLACED

After a two-year hiatus, the Arab League re-convened at the beginning of November in Algiers against a backdrop of uncertainty and discord. By Pierre Boussel END_OF_DOCUMENT_TOKEN_TO_BE_REPLACED

In the run-up to the COP27 global climate summit, hosted by Egypt in November, it is worth noting that little rainfall, aggressive heatwaves and worsening drought make the Middle ... END_OF_DOCUMENT_TOKEN_TO_BE_REPLACED
Author:
Martina Sabra
Date:
Mail:
Send via mail

END_OF_DOCUMENT_TOKEN_TO_BE_REPLACED
Social media
and networks
Subscribe to our
newsletter