He came to fame as the pianist who played in the rubble of war-torn Syria, but there is so much more to Aeham Ahmad than that. He's now a popular musician and has made a home for himself and his family in the German city of Wiesbaden. By Annabelle Steffes-Halmer

Snow covers the streets of Wiesbaden, muffling the sounds of the busy city. The crunching of steps in the snow is the only clear sound. A young man is walking along Wilhelmstraße. He pulls his thin jacket tighter around his narrow shoulders and lifts his face.

"Could we do that again?" asks the cameraman, filming for the DW multimedia special "After the Escape". He waves to the young man, who runs back to his starting position to do it over for the camera. He's patient, despite the bitter cold of January and his runny nose.

"Whenever I walk down this street, I always have to think of Damascus," says Aeham Ahmad during our interview. "I remember how my wife and I would walk through the old part of the city. We thought we had all the time in the world."

Ahmad's Damascus does not exist anymore. Innumerable bombs have rained down on it. Fighters have moved through the twisting streets, plundering and killing. For a long time, Ahmad did not let himself be deterred by all the destruction. Nearly every day, he and his friends would pull his piano into the ruins where he would play in order to boost people's spirits, especially those of children. Friends would film him making music in the rubble. The Internet videos made him famous around the world.

He played and played: to oppose hate, war, hunger. Then one day, a grenade exploded nearby, injuring one of his hands and his face. Ahmad was lucky to escape with his life. The scar above his eyebrow and his runny nose, which will not go away, attest to that. 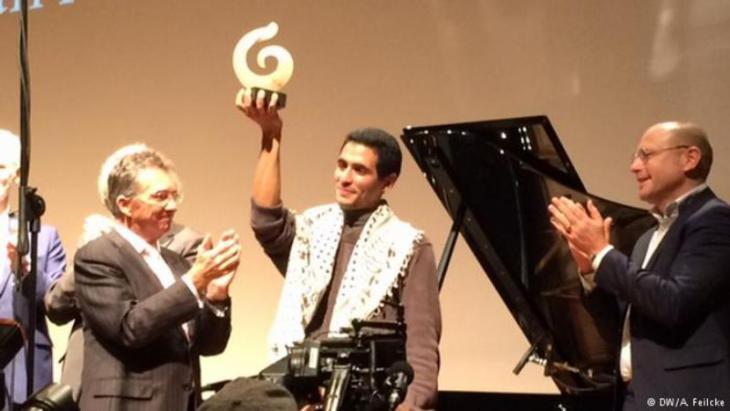 In 2015, Aeham Ahmad was presented with the first International Beethoven Prize for Human Rights, Peace, Inclusion and the Fight Against Poverty. The award is inspired by the words of Ludwig van Beethoven: "to do good where one can, to love freedom above everything else"

Much worse than that, however, are some of his memories. "Zeinab was a little girl who would always come and sing," recalled Ahmad. One day a random bullet hit her as she stood by his piano, killing her instantly. Ahmad did not want to play any more after that, but his friends insisted that he continue. So he did, until one fateful day in April 2015.

It was Ahmad's 27th birthday, and a friend and Ahmad's father were helping him to try to smuggle his piano across a checkpoint manned by the "Islamic State" (IS). They were stopped and questioned by guards carrying Kalashnikov rifles. The IS fighters set fire to the piano; to them, music is sacrilege. Ahmad's blind father stepped in front of his son and his friend, claiming that the piano belonged to him and that he did not know the two young men. That prevented what could have been a much worse situation.

The fear that Ahmad must have felt on that day still radiates from his dark eyes. In all likelihood, it will never completely disappear. But he is still open and boyish when he speaks. Once he starts talking, it's hard to stop him; he even laughs at times. And yet, all of a sudden, melancholy can take hold of him again – like when he talks about his parents, who are still in Yarmouk, a district of Damascus, or his brother Alaa, who has been missing since 2013.

Aeham Ahmad was born and grew up in the Yarmouk Camp for refugees. He is a member of the Palestinian minority in Syria. His father, a blind music instrument maker, fostered his musical talent from an early age. Ahmad started taking piano lessons when he was five years old and later studied music in Damascus and Homs. But becoming a pianist was more his father's dream than his own. 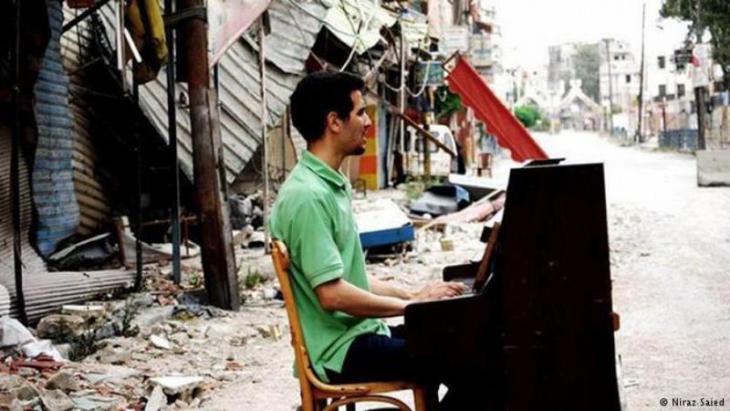 "Nearly every day, he and his friends would pull his piano into the ruins where he would play in order to boost people's spirits, especially those of children. Friends would film him making music in the rubble. The Internet videos made him famous around the world," writes Annabelle Steffes-Halmer

After his piano was destroyed, Ahmad was overcome with fear. He, his wife Tahani and their two young sons, Ahmad and Kinan, decided to fled. They did not get very far. Soldiers captured them and locked them up in a prison just outside Damascus. It was a miracle that the family was released a few days later.

Then they made a very difficult decision: Tahani and the children would go back to Damascus, but Ahmad would flee to the West. He did so by way of Turkey, Greece, Serbia, Croatia and Austria. He reached Munich, Germany, in September 2015 and was then assigned to the cities of Olpe, Kirschheim, Münster, and Gießen, before being allowed to settle in Wiesbaden, the capital of the federal state of Hesse.

Had the war in Syria never occurred, the world might never have heard of Aeham Ahmad. And had he never shared his heartfelt music with the world, he might not have been able to gain a foothold in Germany so quickly. 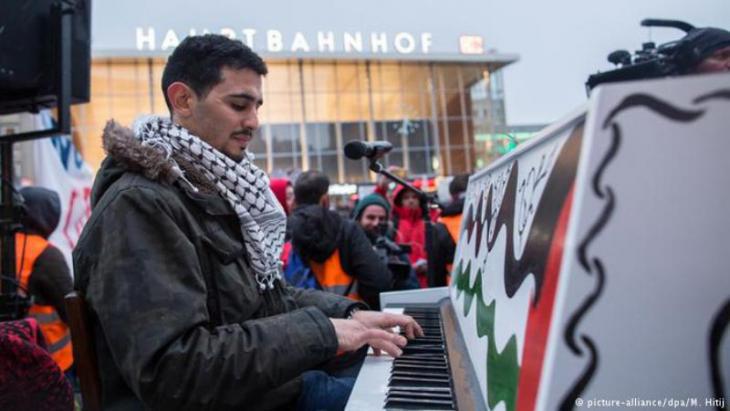 In January 2016, Aeham Ahmad played his piano outside Cologne Central Station as part of a protest organised by Syrian refugees to demonstrate their opposition to the sexual harassment experienced by numerous women at the 2015/2016 New Year's Eve celebrations

A new beginning full of hope

From the very beginning, Aeham Ahmad had "friends" in Germany due to his videos. Famous German artists such as musician and actor Herbert Grönemeyer and musician Judith Holofernes invited him to perform with them. Ahmad was increasingly able to earn money with his music and build a life for himself in Germany.

In August 2016, his greatest wish was granted: after a year of separation, he was able to hold his wife and children in his arms again. They now live together in a small apartment in Wiesbaden.

But despite his musical success, Ahmad worries that interest in him could abate somewhere down the line and that he would no longer be successful as a pianist. "I'll end up selling falafel or something again," he said. "I am Aeham Ahmad from Syria. Without my story, no one will want to come to my concerts anymore!" In addition, he still has his damaged hand from the grenade to contend with, so he could never become a concert pianist.

He may be limited in technical skill, but his virtuoso, emotional pieces touch people where it matters most: in their hearts. The "pianist in the rubble" may thus one day become simply the pianist Aeham Ahmad.

Home
Print
Newsletter
More on this topic
Interview with the pianist Aeham Ahmad: Bittersweet memories of SyriaInterview with the Syrian Composer-pianist Malek Jandali: "We are witnessing the fall of humanity"Music festival on the Greek island of Chios: Opportunities for reflection
Related Topics
'Islamic State' | IS, Arab music, Migration, Migration in Germany, Musical worlds, Places of Dialogue, Refugees, Syrian Civil War
All Topics

Algeria‘s regime is again cracking down on anti-fracking activists and the unemployed in the country‘s south. Yet EU countries remain keen to scale up their energy cooperation ... END_OF_DOCUMENT_TOKEN_TO_BE_REPLACED

Bachtyar Ali sends the hero of his latest novel – "Mein Onkel den der Wind mitnahm" – literally flying. Jamshid is so thin after his years as a political prisoner that a gust of ... END_OF_DOCUMENT_TOKEN_TO_BE_REPLACED

For a century, the Kurds and other minorities in Turkey have been subject to state repression. With his dissertation "The Kurdish Question in Turkey", political analyst Ismail ... END_OF_DOCUMENT_TOKEN_TO_BE_REPLACED

Anti-Semitic motifs have no place at Germany’s documenta art show or anywhere else in the world, stresses Meron Mendel, director of the Anne Frank Educational Centre in Frankfurt ... END_OF_DOCUMENT_TOKEN_TO_BE_REPLACED

A new exhibition, "Syria – Against Forgetting", at Cologne’s Rautenstrauch-Joest-Museum focuses on Syria's artistic and cultural heritage and pays tribute to the country before ... END_OF_DOCUMENT_TOKEN_TO_BE_REPLACED

Madrid's about-face on the Western Sahara conflict has enraged Algeria. Trade relations have been frozen unilaterally and a cut in gas supplies to Europe could be in the pipeline ... END_OF_DOCUMENT_TOKEN_TO_BE_REPLACED
Author:
Annabelle Steffes-Halmer
Date:
Mail:
Send via mail

END_OF_DOCUMENT_TOKEN_TO_BE_REPLACED
Social media
and networks
Subscribe to our
newsletter