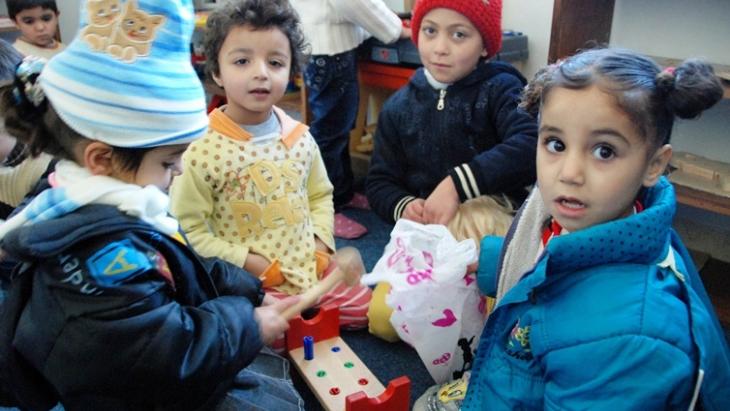 Syrian refugee children
A lost generation in the making

In the Jordanian village of Manshia, a German NGO has set up a kindergarten for traumatised Syrian refugee children. Here, they can leave their horrible past behind and learn how to be children again. Laura Overmeyer visited the kindergarten

Five-year-old Hanan takes off her shoes and stands them neatly next to the already overflowing shoe rack. Eyes bright with happy anticipation, she grabs her bag and enters a large room decorated with garlands and colourful pictures. Around 40 other children are sitting on the carpet and on mattresses placed against the walls. It's just before eight o'clock and the cheerful, noisy throng is waiting for the morning greeting ritual.

"Sabah al-Hair," calls Silja, the head teacher of the kindergarten, wishing the children good morning. "Sabah al-Nur," they respond. Together, they sing and pray. Then the children split up into groups to pursue different activities. Hanan, taking a friend by the hand, waves goodbye and disappears into the adjacent room, which is devoted to painting and arts & crafts.

The mood is cheerful and the rooms are filled with the sound of children's laughter. Yet appearances are deceptive. This is not a normal kindergarten, and even if they are able to laugh again, these are not happy, carefree children. They are refugees from the civil war in Syria a few kilometres away and they all have seen and experienced things that will haunt them the rest of their lives.

A semblance of security

Manshia is a small village near the city of Mafraq in northern Jordan. From nearby hilltop, one can look far into Syria, which seems at once so close and yet part of another world. Over there is war and misery; here there is a semblance of security. 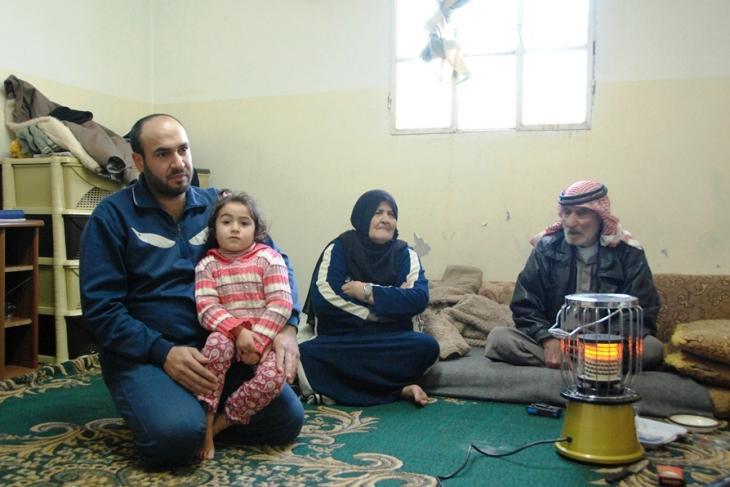 Hanan (2nd from left, pictured here with members of her family) was born in Homs, which has been the scene of intense fighting for over three years now. Much of the city, like Hanan's former home, has been reduced to rubble. Eight months ago, the family decided to flee across the border into Jordan, where it now lives

Hanan was born in Homs, a city that has been the scene of heated battles for more than three years now. All that's left is rubble and ash, just like Hanan's house. Eight months ago, the family decided to flee. They struggled across the Jordanian border on foot and were taken in by the Zaatari UN refugee camp, which with its 120,000 residents is already the country's fifth largest "city". The infrastructure there is completely overwhelmed by the endless stream of refugees.

"Under no circumstances did we want to stay in the camp!" says Hanan's father, looking back. "There were seven of us sharing a tent. There was little fresh food and the hygienic conditions were a disaster. We hoped to find people outside the camp who could help us. And to find work."

According to official statistics, about 560,000 Syrian refugees have fled to Jordan to date, but the actual number is assumed to be far greater. 80% of the refugees are women and children. Most of the families live outside the camps. Depending on their budget, they rent either tiny apartments or houses, while others set up makeshift dwellings in undeveloped areas. Hanan's family was one of 350 Syrian families to settle in Manshia.

An official Jordanian work permit is hard for refugees to come by, which is why most work illegally at low-wage jobs to scratch together enough money to pay rent, electricity, water and food – with prices rising steadily due to the endless influx of refugees.

"We have to sell more than half the food we get with our UN food stamps in order to have a roof over our heads at the end of the month," laments Hanan's mother. Relief supplies such as donated clothes or toy donations are also sold for cash.

And yet it's usually still not enough. According to a study conducted by the international development aid association Oxfam, the income (including aid) of the refugee families on average covers less than half their costs for housing, food and medical care. Four out of five families are in debt. Once their savings have been spent, they have no choice but to return to the misery of the camps. 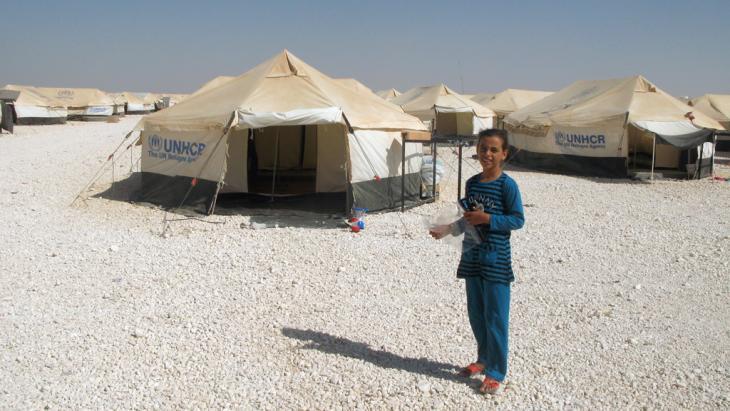 Misery and hardship abound in Zaatari in northern Jordan, one of the largest refugee camps in the world. Most refugees from Syria have ended up here, where families live in tents with only small heaters to warm them in winter and where water shortages are a regular problem

This misery is palpable. It means hunger, cold and disease, and it endangers in particular the weakest link in the chain: the children. Relief supplies and donations, medical care and warm clothes seek to counteract these hardships as much as possible. But there is still another kind of suffering, one that goes deeper and does the children far greater harm in the long term than an empty belly.

At only five years old, Hanan has already seen death. She has encountered inhuman violence. She watched her hometown being destroyed and looked on as her home, harbouring her entire past, collapsed before her eyes. Like almost every Syrian child, she has experienced relatives and friends disappearing and dying. When she plays with her friends in the kindergarten in Manshia, she seems like a normal happy girl. But at night, she's plagued by terrible nightmares when all that she has experienced wells up in her.

"Every child has a different way of dealing with the past," explains Daniel Harrison, an aid worker. "While some seem to be able to repress it all, others display distinct signs of trauma: shyness, loss of language, bed-wetting, sudden emotional outbursts, crying and listlessness. Nearly all the children are anxious about the future and afraid of a repetition of their traumatic experiences." Harrison derives this information from a study he conducted last year of four- to five-year-old refugee children in Manshia.

About a year ago, the young American arrived in Mafraq with his wife, Kim. The couple were previously development aid workers in Yemen, but had to leave the country because of the precarious security situation. They decided to come to Jordan and help the Syrian refugees there. In co-operation with the German NGO Vision Hope, they realised their concept of a kindergarten for traumatised children as a pilot project for further kindergartens in Jordan and Lebanon.

"The idea was to build a safe place for the refugee children, where by means of various approaches such as Montessori and psychotherapy, they can put their past behind them and learn to be children again," explains Kim Harrison. 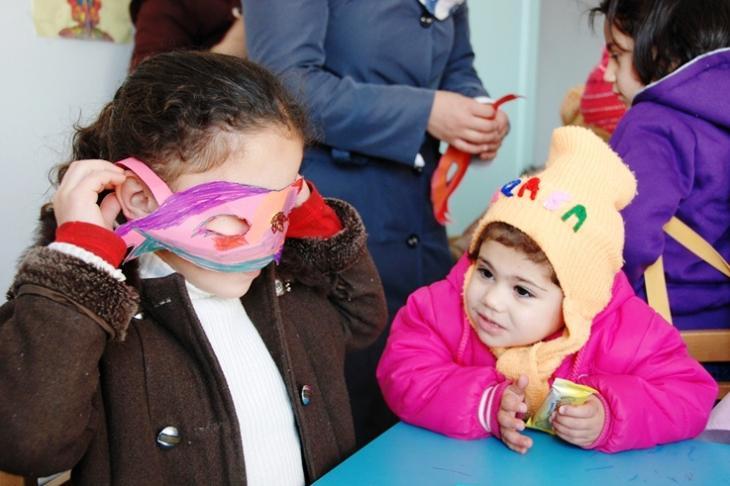 Offering children a semblance of normality and childhood: this photo shows children making paper masks in the kindergarten for traumatised children run by the German NGO Vision Hope

The kindergarten is first and foremost a safe haven. Here, the children can play, sing, do arts & crafts and learn. Their timetable also includes lessons in English and Arabic. The teachers use painting therapy and play therapy to gently help the children come to terms with their past and at the same time turn their gaze to a more hopeful future. In difficult cases, the children and, if necessary, their families, are referred to a psychologist from the capital city of Amman for therapy.

The kindergarten teachers, too, need to consult the expert at regular intervals; they carry their own mental burdens in addition to dealing with the children's trauma. All 18 teachers are Syrian women with training in education and trauma therapy.

A drop in the ocean?

About 80 children aged from four to seven years attend the kindergarten in Manshia. 80 children. It seems like a mere drop in the ocean given the appalling number of 1.2 million Syrian children currently residing as refugees outside their homeland or the still more alarming number of 4.2 million children who are exposed to the daily dangers of poverty, displacement and violence in their war-torn homeland.

They all belong to a generation whose future is at risk – and not only because of the ongoing fighting. The problem is that they have scarcely any access to education, neither in Syria – where one in five schools has been destroyed, closed, or repurposed – nor in the host countries, where the national educational institutions do not have the capacity to absorb the throngs of Syrian schoolchildren pouring over the borders. The children have experienced extreme adversity and look to an uncertain future in which hope and confidence threaten to be submerged in the dark morass of fear.

"Al Iman, Al Amal, Al Hubb (faith, hope, love). That is our principle," says Silja. "Above all, we place love at the centre of all we do: that is what we pass on to the children, and what supports the internal healing process." In reality, though, it will take more than just love to prevent the emergence of a lost generation.

After a two-year hiatus, the Arab League re-convened at the beginning of November in Algiers against a backdrop of uncertainty and discord. By Pierre Boussel END_OF_DOCUMENT_TOKEN_TO_BE_REPLACED

In the run-up to the COP27 global climate summit, hosted by Egypt in November, it is worth noting that little rainfall, aggressive heatwaves and worsening drought make the Middle ... END_OF_DOCUMENT_TOKEN_TO_BE_REPLACED

In this essay, renowned Lebanese journalist and writer Hazem Saghieh asks whether the Arab Levant, which stretches from Iraq in the east to Egypt in the west, will remain an ... END_OF_DOCUMENT_TOKEN_TO_BE_REPLACED

With his fist bump greeting for a man he previously called a pariah, US President Biden has paved the way for Saudi Crown Prince Mohammed bin Salman's return to the international ... END_OF_DOCUMENT_TOKEN_TO_BE_REPLACED

The murder of a female student at Mansoura University in the Nile Delta has sparked a long overdue debate on femicide in Egypt. Karim El-Gawhary reports from Cairo END_OF_DOCUMENT_TOKEN_TO_BE_REPLACED

When times are tough, the exchange of ideas and perspectives becomes especially important. It takes dialogue. And at Deutsche Welle, we need distributors and cooperative partners ... END_OF_DOCUMENT_TOKEN_TO_BE_REPLACED
Author:
Laura Overmeyer
Date:
Mail:
Send via mail

END_OF_DOCUMENT_TOKEN_TO_BE_REPLACED
Social media
and networks
Subscribe to our
newsletter