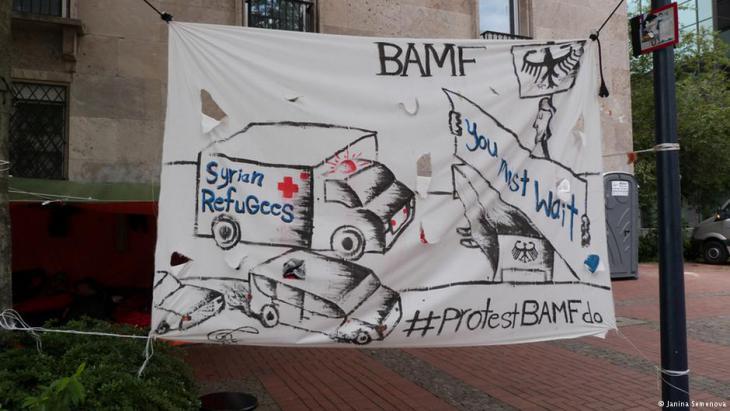 Although Syrian refugees have been promised a speedy asylum process in Germany, some have been in limbo for as long as eight months. Fed up with waiting, a group of Syrians has organised a protest camp in Dortmund. By Janina Semenova

The weather is finally co-operating: it is neither too hot nor too cold to lie on the foam mats in the tents. There are folding chairs and small camping tables; a hookah stands in the corner of the tent. It could be any holidaymaker's tent, but it's been set up in the German city of Dortmund for a much more serious reason: Syrian refugees in the city have been protesting here day and night for over a month. Officials said they would have their paperwork finished within three months. But after waiting for as long as eight months, they want their asylum applications to be processed.

"We have to save the lives of our wives and children," says Fadi Khatib, a Syrian refugee from Aleppo, and the camp's spokesman. Similar statements have been hand-painted on the banners stretching between the trees and lamp-posts next to the camp to make passers-by aware of why they have established the protest camp.

All the Syrians in the camp are men between the ages of 30 and 50. They fled their country in order to bring their family members to Germany in a safe, legal manner. That is the message they want to get across.

But since completing the arduous journey, many have received bad news from home. "Since we've been protesting here, three families have been killed," says Khatib. His sister's house was hit by a bomb, but luckily, she wasn't at home when it happened. However, his cousin and her daughters drowned in the Mediterranean while attempting to cross to Europe. 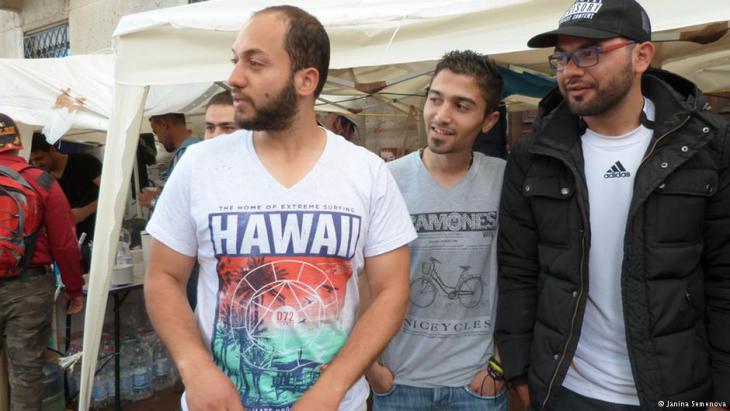 A matter of life and death: the Syrian refugees say they aren't asking for preferential treatment, just to be treated fairly and not to have to wait eight months for their asylum applications to be processed

Caught between IS and Assad

That's why many of the men at the camp are glued to their smartphones, searching for news from their embattled country. "Every single one of us is scared of getting bad news from Syria," says Sakher al-Mohamad, a Syrian journalist who fled because the Syrian secret service was searching for him. "Everything's okay right now, but who knows what's going to happen tomorrow?" The families of most of the refugees in the protest camp were caught between the front lines of the self-styled "Islamic State" and the Syrian regime.

"I'm the best off," says Khatib. His family has made it to Turkey, near the Syrian border, and his asylum application was finally approved after an eight-month wait. Nevertheless, he continues to protest on behalf of other refugees who are still stuck in legal limbo. Khatib is careful to emphasise again and again how much better his situation is compared to others – men like Fadi Jabbour, who made it from Turkey to Greece in a rubber boat with his sick brother and 50 others, only to end up in a Hungarian prison.

Many of the other demonstrators also have terrible stories of their flight. On their phones, they show visitors videos of refugees who were beaten in Hungary allegedly because they didn't want to be fingerprinted.

Recalling such incidents puts a pall on the atmosphere at the camp. After all, despite all their bad experiences, the 50 men who occupy the camp each night are generally in a good mood. A routine has settled in, and that helps to distract them. A coffee machine is in frequent use, and two of the men prepare hummus in small bowls. The camp is cleaned every day: they sweep the area in front of the tents and the sleeping mats. Everything is in order.

This order is typical of all aspects of this protest. Everything is very professional: more than 3,000 people have signed a petition. The Facebook page "Syrians sit-in Dortmund", which is available in Arabic, English and German, has accumulated more than 5,000 likes. There have also been talks with politicians from the city of Dortmund and the state of North Rhine-Westphalia. 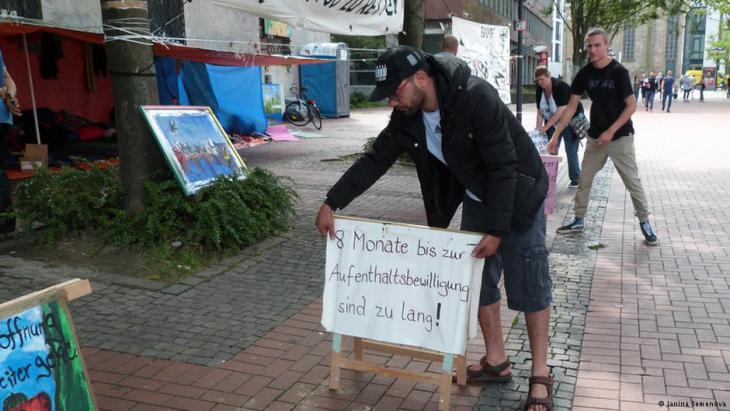 The protest is very professional in many respects: the camp is cleaned every day and the protesters have organised not only a petition and a trilingual Facebook page, they also communicate with the wider public via Twitter

In mid-June, the Syrians demonstrated in front of the Dortmund branch of the Federal Office for Migration and Refugees (BAMF). They then moved their camp near to the more centrally located main train station in Dortmund. People are constantly passing by: Passengers coming to and from the train station and shoppers headed for the nearby pedestrian zone. Police guard the refugee camp around the clock as Dortmund has an active right-wing scene and is known for frequent neo-Nazi demonstrations.

But more than a few neo-Nazis shouting unpleasant slogans, it is the kindness of many of the city's residents that the Syrians recall. The blankets, sleeping mats and chairs were all donated by locals. Volunteers have been using social media to organise their efforts. Using the #protestbamfdo hashtag, there have been calls on Twitter for locals to donate items the camp needs, such as a new kettle.

Khatib says the Syrians aren't asking for preferential treatment, "We should be prioritised because for us, it is a matter of life and death, but that's not what we want." He says that the Syrians only want to be treated justly and not have to wait eight months for asylum. If the process takes much longer, they already know what they will do next: take their protest camp to Berlin.

Home
Print
Newsletter
More on this topic
Europe's refugee policy: Anything is better than the status quoMigration and xenophobia: Europe's refugee problem, then and nowAfter the refugee catastrophe in the Mediterranean: How the EU is killing refugees
Related Topics
Integration in Germany, Migration, Migration in Germany, Policy on refugees and migration, Refugees
All Topics

Giessen, Eichsfeld, Kusel, Berlin – cars bearing old German number plates are the latest trend on the streets of Cairo. Many Egyptians regard the discarded plates as chic. What ... END_OF_DOCUMENT_TOKEN_TO_BE_REPLACED

Tunisia has been going through a severe economic and political crisis in recent years. More than one in three young people there are unemployed. For many skilled, qualified and ... END_OF_DOCUMENT_TOKEN_TO_BE_REPLACED

German imams have publicly expressed their solidarity with the women of Afghanistan. In a letter of protest, the clerics say that the Taliban regime's decree barring women from ... END_OF_DOCUMENT_TOKEN_TO_BE_REPLACED

At the end of every year, the team at Qantara.de gives you a run-down of the ten most-read articles on the site over the past 12 months. Here is a quick overview of the stories ... END_OF_DOCUMENT_TOKEN_TO_BE_REPLACED

Social engagement is often motivated by religious factors. A new book explores the background to these community efforts and appraises how effective they are in helping to ... END_OF_DOCUMENT_TOKEN_TO_BE_REPLACED

The government in the Netherlands, one of the last European nations to abolish slavery, has made an historic apology. But some feel that there is still a long way to go. By Ella ... END_OF_DOCUMENT_TOKEN_TO_BE_REPLACED
Author:
Janina Semenova
Date:
Mail:
Send via mail

END_OF_DOCUMENT_TOKEN_TO_BE_REPLACED
Social media
and networks
Subscribe to our
newsletter