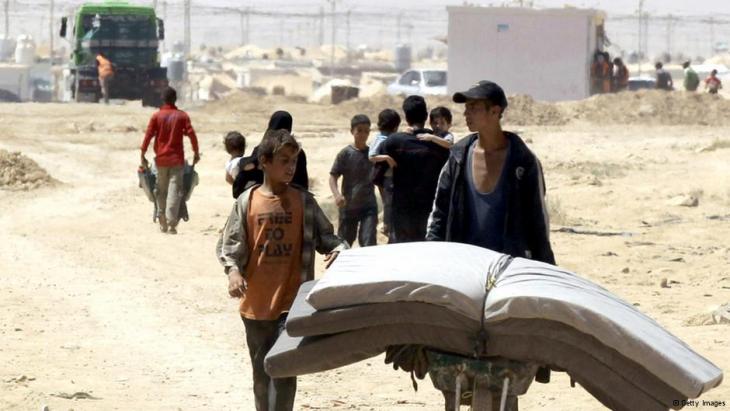 How do Syrian refugees get into Jordan, who is allowed to cross the border, who isn't, and why?

Ruth Jüttner: Officially, Jordan's border is open to everyone. In reality, things are quite different. Palestinian refugees from Syria are affected most of all. They have been denied entry since the beginning of 2012, and the same is true for Iraqi refugees who fled to Syria even before the war in Iraq. Refugees without papers also aren't allowed into the country. In addition, the border is closed to all refugees at certain times.

Ruth Jüttner: Different reasons are given. When it comes to the Palestinian refugees, Amnesty was told Jordan didn't want to compromise their right to return to Israel - a cynical argument we've unfortunately heard in other crises, too. [ed.: Some observers view the argument of a right to return as a pretext to avoid having to accept more Palestinian refugees]. Concerning the Iraqi refugees, Jordanian authorities say they already took in 100,000 people, who should now be able to return to Iraq. That is problematic from our point of view, as several hundred people are killed every month in Iraq in bomb attacks and fighting. In general, the Jordanian government points out that the refugee camps are overcrowded - that is an argument we can follow. Jordan only wants to accept new refugees when camp capacities have been increased. So the situation of the refugees in Jordan is really bleak. 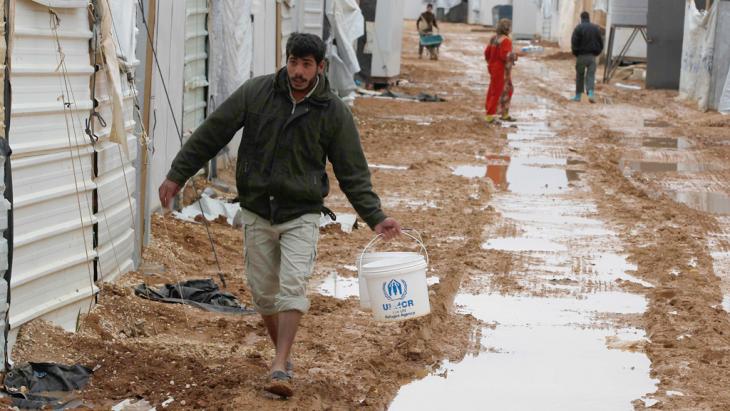 It is getting colder: Winter hit the refugee camps in Jordan and makes life even harder for the Syrian refugees. For 2014 the UNCHR estimated that 6.5 billion Dollars are required to provide humanitarian aid due to the Syrian crisis

What is the situation like for the Syrian refugees who already are in Jordan?

Ruth Jüttner: Currently, about 550,000 refugees live in Jordan. Their situation is extremely difficult. About two-thirds live outside of the refugee camps and are fighting for survival. They have to fend for themselves concerning housing, food and medical care. Fifty percent are children under the age of 18 and very few of them go to school. Many are seriously traumatized and don't see any perspectives for their future. In addition, many children have to work to contribute to their family's survival.

What is the situation like for women in the refugee camps?

Ruth Jüttner: According to Jordanian and international media reports, older men from Jordan and the Gulf States take advantage of the plight of the young Syrian girls by trying to convince them to get married. The girls are easily in danger of being sexually exploited. It is very difficult to check such reports. When we talk to Syrian refugee families we often get the impression that they refuse to marry their daughters to non-Syrians. We've also found out that Syrian women and girls are exposed to sexual harassment. Women looking for work have also received marriage proposals. That's also a way to exert pressure. 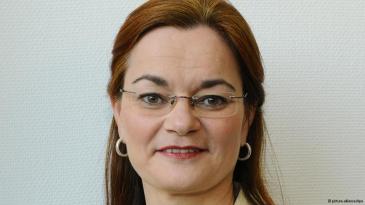 "Currently, about 550,000 refugees live in Jordan. Their situation is extremely difficult. About two-thirds live outside of the refugee camps and are fighting for survival," says AI Mideast consultant, Ruth Jüttner.

The situation of Syrian refugees is dismal elsewhere, too, for instance in Egypt. How does the population there treat them?

Ruth Jüttner: In Egypt, the situation for Syrian refugees has deteriorated sharply since the ouster of President Mohammed Morsi. The new interim government in July introduced a mandatory visa for Syrians, which is why few new Syrian refugees currently enter the country. The mood in the country has soured, hostile feelings against them is on the rise among Egyptians.

Random arrests by security forces have also increased. When Syrians illegally try to leave Egypt and are picked up by the coast guard, they are arrested and sometimes held for several weeks. Syrians are presented with a choice: they can either go back to Syria or stay in prison. Such forced deportation is against international law, which grants the Syrian refugees the right to protection because in Syria life and limb are in danger.

What does Amnesty International suggest to help solve the Syrian refugees' plight?

Ruth Jüttner: Syria's neighbouring states bear the brunt of the refugee crisis: 2.2 million Syrian refugees have fled to states in the region. The international community must greatly increase humanitarian aid to enable the neighbouring states to continue to offer the refugees protection. Only 47 percent of the UN Regional Plan has so far been financed. That means significant financial means are needed. We urge the European Union and the United Nations High Commissioner for Refugees to create more opportunities to include Syrian refugees that are especially in need of protection in humanitarian admission programs. Such a humanitarian gesture would relieve Syria's neighbours.

Germany's foreign policy is explicitly values-based. But what happens, Ralf Bosen asks, when democracy, the rule of law and human rights collide with the logic of trade and ... END_OF_DOCUMENT_TOKEN_TO_BE_REPLACED

A new survey by Arab Barometer adds numbers to the narrative that COVID has led to a harsher reality for women in the Middle East and North Africa. By Jennifer Holleis and Razan ... END_OF_DOCUMENT_TOKEN_TO_BE_REPLACED

They’ve already got the Louvre; they’ll soon have a Guggenheim Museum as well – and now the Emirates have added literature to their quest for cultural supremacy in the Arab world ... END_OF_DOCUMENT_TOKEN_TO_BE_REPLACED

The rollout of coronavirus vaccines in the Middle East and North Africa is already taking place on a massive scale, with the United Arab Emirates leading the way. Nevertheless, ... END_OF_DOCUMENT_TOKEN_TO_BE_REPLACED

Faced with a deteriorating economy and a discontented populace, Jordan's ruling family is feeling the pressure. END_OF_DOCUMENT_TOKEN_TO_BE_REPLACED

Founded in 1921 as a temporary solution, Jordan managed to establish itself as one of the most stable countries in the Middle East. The inclusive and flexible approach taken by ... END_OF_DOCUMENT_TOKEN_TO_BE_REPLACED
Author:
Kersten Knipp
Date:
Mail:
Send via mail

END_OF_DOCUMENT_TOKEN_TO_BE_REPLACED
Social media
and networks
Subscribe to our
newsletter