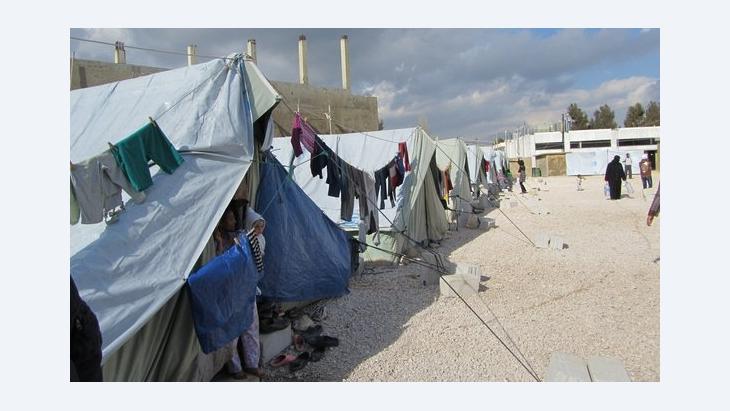 There are now more than half a million refugees from the Syrian civil war in Lebanon, seeking shelter with families, in rented apartments and on construction sites, in ruins and homemade tents, in communal accommodation and occasionally in transit camps. Susanne Schmelter reports

The road from Beirut to the Syrian border in the direction of Damascus leads right through the Bekaa Plain. Right up to the border it is strewn with shops, houses and smaller roads leading to villages. There, on the edge of the road close to a butcher's shop, waits Suheir with around 150 other men, women and children from Syria for a shipment of food aid to be distributed.

First, the names and number of members of the family are noted down, then each name is called one after the other, and the food is handed out. Using money donated by the German-Syrian Association and the Lebanese-Syrian Association Sawa for Syria, the local sheikh has purchased bread and had four sheep slaughtered.

After around two hours, Suheir is holding meat and bread for herself and her three children. Of course she's happy about such demonstrations of solidarity, but she's also irritated: "It's great, but it's only enough for two days," she says. 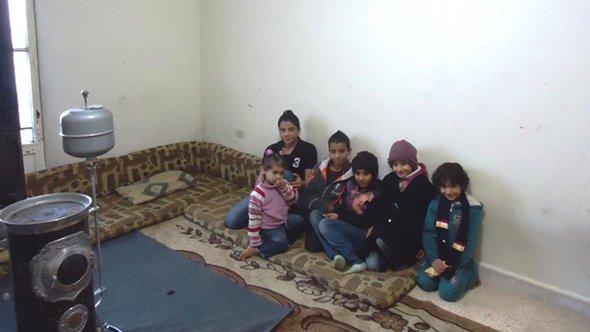 As the conflict in neighbouring Syria stretches into a third year, a wave of refugees has flooded Lebanon. The refugees can enter the country without a visa, but they are only finding limited protection and safety there

Waiting in a cluster of people for such a long time for food not only makes it clear to her that she is now reliant on aid, she is also ashamed: "Why are the Syrians being paraded in front of the Lebanese in this way? It would have been better to go to a community centre, rather than wait here on the road."

The sense of shame appears to overlap with feelings of rage against the Assad regime. Suheir wants to show how she is now being forced to live: On the first floor of a building still under construction, she's renting two rooms for 150 dollars, together with 10 other people. She steps out onto the balcony, which has not yet been properly secured, and points to the street below: "That's our Corniche," she says sarcastically, referring to Beirut's beach promenade.

In some ways she's right: In contrast to the interior of the rather bleak dwelling, this ugly concrete projection does at least afford a sense of space. Inside, the wind gusts through the bare concrete blocks, there's no running water, no heating and no doors.

A few mattresses are propped up against the bare wall. "It's a scandal that we have to live like this," says Suheir. One of her neighbours points demonstratively to the rubble on the floor of the open ground floor area: "Look what Bashar has done to the Syrian people. We liked him at first, but the way he's behaved means all of us hate him now."

Syrian refugees may be able to enter Lebanon without a visa, but they are only finding limited protection and safety there. Lebanon's security-policy equilibrium is highly fragile, and society is divided over the question of who is for Assad, and who is against him. State structures are rudimentary and the assertiveness of the Lebanese government often hampered by a hidebound system of proportional representation, corruption and the power games of Hezbollah.

It also has no clear strategy on how to deal with the refugees from Syria. This is why it is essentially granting a free hand to international and local NGOs, religious and secular initiatives as well as international state organisations.

While Lebanese refugee policy is very laissez-faire, it is rigid on one point: no refugee camps. This is because of the nation's experience with the Palestinian camps set up in 1948 and 1967. Initially erected as a temporary measure, they remained in place, developed autonomous structures and also played a significant role in the Lebanese civil war.

There are however a few transit or reception camps. The village of al-Marj, located some five kilometres from the Syrian border, supplied a plot of land for this purpose. The UNHCR, the Saudi state and Islamic charitable organisations joined forces and have been maintaining a camp here since the end of 2012. 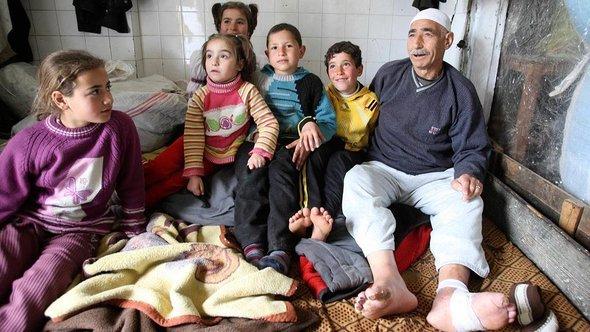 Fighting for dignity, fighting for survival: The United Nations says that at least 474,000 Syrian refugees have entered Lebanon, but experts say the figure could be closer to 700,000, in a country with a population of only about four million

​​As the mayor of al-Marj explains: "At the moment, some 300 refugees are being housed in 36 tents. There are sanitary facilities and kitchens. There is also running water and electricity. Up to now, the children have unfortunately not been able to attend school." The local sheikh and camp director agree: "While living conditions are difficult here, it's better than much of the other refugee housing in Bekaa."

This becomes evident a few kilometres away in a small mountainside settlement. Here, 120 people are living in a former prison. The interior courtyard is open, the walls are damp. Four families are sharing a chilly room with mouldy walls that serves as a kitchen. Oil and a few other basic supplies stand in the corner. There are no shelves, tables or chairs. Aid organisations have provided mattresses and blankets. The families have suspended blankets across the entrances to rooms that used to be communal and isolation cells.

Children are jumping about all over the place, there's little room for them to play even outside the prison. Although basic supplies are lacking wherever you go, one father from Aleppo is quite clear: "We don't want to be refugees. We don't want handouts. We want help to get rid of Bashar and then we want to go back and rebuild our nation." But a swift end to the Syrian conflict is unfortunately not in sight. Every day that passes dashes any hopes that they will soon be able to go home.

The fact that there are officially no camps means that the refugees are free to choose where they stay in Lebanon. The Lebanese newspaper The Daily Star welcomes this and quotes the Director of the Oxford Refugee Studies Centre, Dawn Chatty, who says that refugees are better able to maintain their independence if they are not housed in camps. In addition to this, she says, it is also more cost-efficient to bolster existing structures instead of investing in entirely new infrastructures for refugee camps.

On a mountainside field opposite, a few families have joined together and erected a camp using tarpaulins, blankets, poles and concrete blocks. In one tent, the members of one family sit around stove, which emits a feeble heat. The father relates how he was forced to flee from a Damascus suburb and that his son is fighting with the Free Syrian Army.

It's dusk, it's cold, night is falling beyond the mountains. The children make victory signs and throw in a song taunting Bashar al-Assad for good measure. It is safer in Lebanon than in Syria, but the war on the other side of the border is very close. Fighters regularly cross the border at night.

The refugees on the Bekaa Plain don't know what the next day will bring. They often lack the most basic supplies. They are not only fighting for survival, but also for dignity, as a way of making some sense of the situation for themselves and their children.

Home
Print
Newsletter
More on this topic
Syrian Refugees in Lebanon: The Heavy Burden of the Open Borders PolicyCamps for Syrian Refugees: Cut off from the Rest of the WorldThe Domiz Refugee Camp in North Iraq: The Agony of the Syrian Refugees
Related Topics
Arab Spring, Arabellion, Democracy and civil society, Human rights
All Topics

Ronya Othmann's novel "Die Sommer" (The Summers) tells the story of Leyla – the daughter of a German and a Yazidi Kurd – who visits her grandparents' Yazidi village in northern ... END_OF_DOCUMENT_TOKEN_TO_BE_REPLACED

In the first case of its kind anywhere in the world, a German court is probing Syria's state torture system. Giving testimony at the trial is one of Syria's most widely respected ... END_OF_DOCUMENT_TOKEN_TO_BE_REPLACED

Political scientist Hugo Micheron on the origins of Islamist terrorism in France, his conversations with jihadists – and on the trial now beginning against the perpetrators of the ... END_OF_DOCUMENT_TOKEN_TO_BE_REPLACED

Five years ago, as hundreds of thousands of refugees came to Germany, Chancellor Angela Merkel maintained: "We can do it." How has Germany – and those who sought asylum – managed ... END_OF_DOCUMENT_TOKEN_TO_BE_REPLACED

Five years ago, Samer Serawan spent many long, cold nights in a muddy courtyard in Berlin, one of many Syrians who queued up to live in Germany. Now he has a successful restaurant ... END_OF_DOCUMENT_TOKEN_TO_BE_REPLACED

In Lebanon, collective trauma is obvious. The explosions in Beirut on 4 August will have triggered memories of the civil war in many people. By understanding how individual and ... END_OF_DOCUMENT_TOKEN_TO_BE_REPLACED
Author:
Susanne Schmelter
Date:
Mail:
Send via mail

END_OF_DOCUMENT_TOKEN_TO_BE_REPLACED
Social media
and networks
Subscribe to our
newsletter