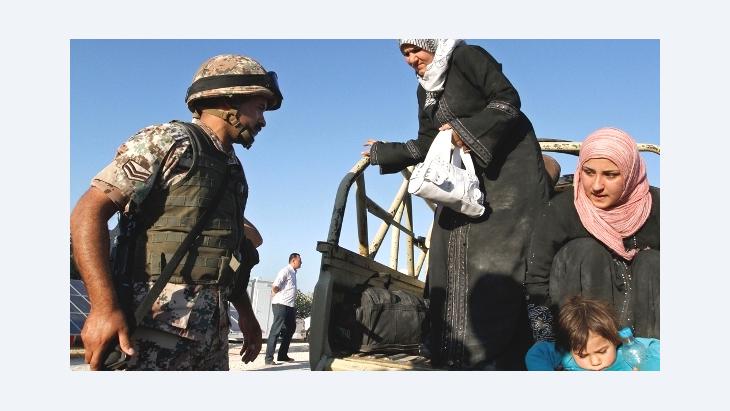 The crisis of the Syrian refugees is growing day by day in neighbouring Lebanon. State institutions are neither able nor willing to deal with the situation. Bjorn Zimprich talked to Guita Hourani, Director of the Lebanese Emigration and Research Center, about the plight of the refugees and the social problems the refugee crisis is creating for Lebanon

Dr. Guita Hourani, due to the crisis in Syria, Lebanon is facing the biggest refugee influx since decades, with large waves of new refugees arriving recently. How many refugees are there in the country right now?

Guita Hourani: As you know, Lebanon has an open border policy with Syria and has not closed the borders to Syrian refugees. Therefore, it is hard to know the exact number of Syrians currently residing in Lebanon. All we know is the number of refugees registered with UNHCR. The rest of the data is estimated. According to UNHCR there are over 147,000 registered Syrian refugees in Lebanon and 64,000 additional people are awaiting registration. However, this number is increasing on a daily basis: UNHCR has reported that 10,000 new Syrian refugees are approaching it for registration daily.

What is the legal status of refugees in Lebanon in general and of these Syrian refugees in particular?

Guita Hourani: The legal status of refugees in Lebanon is an unresolved issue. The country lacks effective legislation and regulations regarding refugees. Lebanon is neither party to the 1951 UN Convention Relating to the Status of Refugees nor its 1967 Protocol. 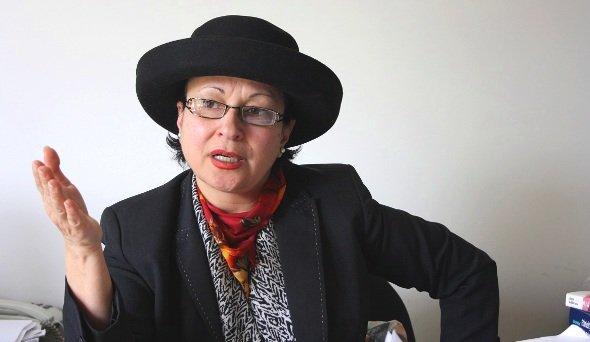 "There is an urgent need for international funding and assistance." Guita G. Hourani is the Director of the Lebanese Emigration Research Center (LERC) at Notre Dame University-Louaizé, Lebanon. She is an internationally renowned scholar in the fields of migration, war and peace studies and development policy

Lebanon continues to assert that it is not an asylum country, mainly because of the socio-demographic composition of its population and because of the large number of Palestinian refugees residing on its territory already. However, and despite the unbearable burden, the government of Lebanon has so far maintained open borders for the Syrian refugees, unlike the case for Jordan and Turkey.

It is claimed that the factual number of Syrian refugees in Lebanon is much higher than those who are officially registered with UNHCR. What is the reason for them not to register as refugees?

Guita Hourani: In general the number of refugees might be double or more than the official numbers. Many, especially those who have been working in Lebanon, already have their living and working arrangements in place, others may not know how to go about registering, and still others, especially those from the middle or upper classes, can afford to get by on their own and don't want to be stigmatised as refugees. Others might be afraid of being recognised and suffering retaliation, especially now that there are rumours that members of the Syrian secret service have infiltrated the refugee communities.

Some are afraid that their names will be released to the government of Lebanon and that it would share them with the Syrian regime. There have been reports that some refugees were handed back to the Syrian regime at the beginning of the influx, and some of these people were reportedly killed. There is a lack of trust by the refugee community in the Lebanese government due to these reports.

Having talked about the high numbers of Syrian refugees in Lebanon, why are there no official refugee camps in Lebanon?

Guita Hourani: The government chose not to have camps because the camps created for the Palestinians have been problematic. 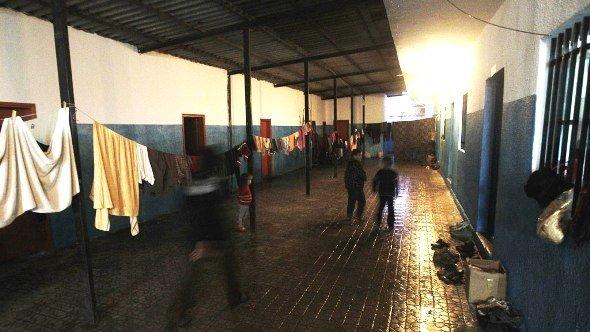 Despite considerable social and political complications, the government of Lebanon has so far maintained open borders for the Syrian refugees. According to UNHCR there are over 147,000 registered Syrian refugees in Lebanon and 64,000 additional people are awaiting registration

They developed into states within a state, utilised to further threaten the security within the country. If you say "camps" in Lebanon it means settlement or a long-term stay, which the country cannot afford in any way, given its own internal challenges.

Where do the refugees actually reside?

Guita Hourani: Geographically, the Syrian refugees that are being registered by UNHCR are concentrated in the northern Akkar region with close to 75,000 refugees, Beirut and South Lebanon with about 18,000, and in the Bekaa Valley, which hosts up to 60,000 refugees. However, one can find Syrians – whether they are considered refugees or workers – in all the villages of Lebanon. The refugees live with host families, in schools, in mosques, and some of them rent places of varying quality; others camp in public places or in dilapidated buildings.

Could you describe the major humanitarian threats these Syrian refugees are facing in Lebanon nowadays?

Guita Hourani: Most of the Syrian refugees live under very deplorable conditions, in derelict houses; many even don't have enough to eat or to keep themselves warm during the winter months. They need medical attention, and some are traumatised. Another issue is of course the education of the children of the refugees.

And I am also concerned that, in order to survive economically, many families are forced to marry off their daughters at a very young age. There are cases of exploitation and "forced prostitution" due to financial needs and lack of protection. Another challenge is related to the infiltration of the youth by political or religious radical parties. 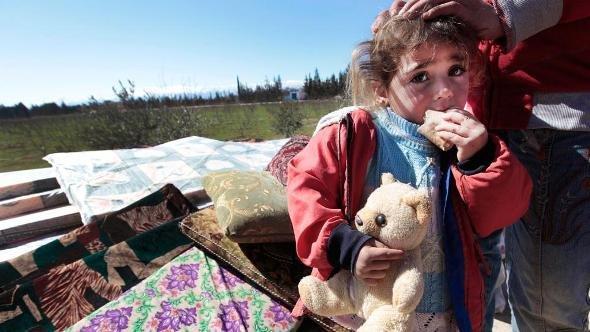 Caught in limbo: in order to survive economically, many Syrian refugee families are forced to marry off their daughters at a very young age. There are even cases "forced prostitution" due to financial needs and lack of protection

​​Which state institutions, charities or NGOs support the Syrian refugees inside Lebanon?

Guita Hourani: The Ministry of Social Affairs, the High Relief Commission, the Ministry of Education and the Ministry of the Interior are among the governmental institutions that are working on the Syrian refugee problem. UNHCR is leading international humanitarian aid efforts and works with many international and local organisations. However, as the numbers swell and the needs grow, there is an urgent need for international funding and assistance.

Do you see the danger of growing tensions between host communities and the Syrian refugees in Lebanon?

Guita Hourani: Many of the refugees, or even those who moved to Lebanon as a consequence of the crisis in Syria and are searching for jobs, are low or semi-skilled labourers. This creates competition with their Lebanese counterparts. Media reports and anecdotal evidence have registered surging animosity between the two groups, especially as the Lebanese economy drifts into recession. In addition, there are Lebanese families in the North and the Bekaa region that are in need of assistance; as the Lebanese government is not helping them and all the aid is going to the Syrian refugees instead, they are beginning to harbour feelings of hostility towards the refugees.

What is the attitude of the Lebanese government and the public opinion toward the Syrian crisis?

Guita Hourani: The situation between Syria and Lebanon is precarious. In Lebanon there is a strong polarisation with regard to what is happening in Syria. Some are with the regime and others are with the opposition. The government of Lebanon is itself divided on the matter. Politicians represented in the current cabinet are calling to close the borders to keep the refugees out of Lebanon, while the government distanced itself not too long ago from the crisis through what it termed a "disassociation policy".

The public divide mirrors the political divide. The uncertainty about the end of the crisis and the future of Syria leaves many Lebanese concerned about the huge number of people coming into the country. Some fear that, whatever the outcome in Syria, these refugees will not return immediately after the end of the crisis. Many Lebanese are beginning to see the situation as similar to the one in Palestine.

Home
Print
Newsletter
More on this topic
The Domiz Refugee Camp in North Iraq: The Agony of the Syrian RefugeesSyrian Refugees in Iraq: Exodus into the UnknownCamps for Syrian Refugees in Zaatari and Atma: Cut off from the Rest of the World
Related Topics
Arab Spring, Arabellion, Assad regime, Human rights, Humanitarian aid, Policy on refugees and migration, Refugees, Syrian Civil War
All Topics

Lebanon and Sri Lanka may be a world apart, but they share a history of political turmoil and violence that has led to the collapse of once-prosperous economies bedevilled by ... END_OF_DOCUMENT_TOKEN_TO_BE_REPLACED

With regard to gender justice, things look bleak in the Arab world. Laws typically discriminate against women, while national legislation all too often does not comply with the ... END_OF_DOCUMENT_TOKEN_TO_BE_REPLACED

When times are tough, the exchange of ideas and perspectives becomes especially important. It takes dialogue. And at Deutsche Welle, we need distributors and cooperative partners ... END_OF_DOCUMENT_TOKEN_TO_BE_REPLACED

As the Lebanese economy has collapsed, so has the country's health system. Many medicines have become scarce or unaffordable. Confronted with a failing state, the Lebanese are ... END_OF_DOCUMENT_TOKEN_TO_BE_REPLACED

END_OF_DOCUMENT_TOKEN_TO_BE_REPLACED
Social media
and networks
Subscribe to our
newsletter