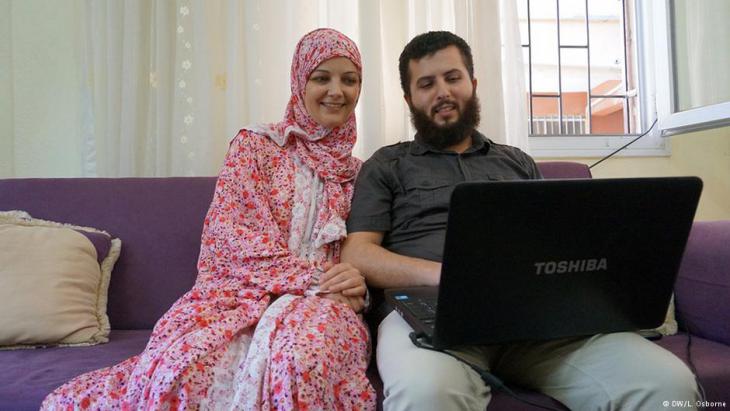 The focus of the violent Syrian conflict has shifted from atrocities committed by the Assad regime to IS. But activists who joined peaceful protests four years ago say their commitment to the revolution hasn't dimmed. By Ruby Russell and Louise Osborne

Chanting erupts from the speakers of a laptop as Mustafa, a bearded young man, watches the screen in a tidy living room in the southern Turkish town of Antakya. His wife, Leila, joins him on the sofa (photo above) to relive the scenes they both took part in more than four years ago. Images of men and women waving flags as they march through the streets of Latakia in north-eastern Syria fill the screen.

"That was the first day. It was great, the feeling and everything, the suspense," Leila says with a smile. Her husband laughs as he adds in Arabic: "They arrested me after one of the main protests. I was shouting so much during the protest, I lost my voice. When I was in jail, they were asking questions, and I wasn't able to answer."

Much has changed since those early days of what the international media described as the "uprising" in Syria. Now the violent clashes between a plethora of armed groups is usually termed the Syrian "conflict". But for Leila and Mustafa – as for many Syrians – it was, and still is, "the revolution".

Earlier this month, citizens of Latakia once again took to the streets in protest, after the cousin of President Bashar al-Assad reportedly shot a Syrian air force officer dead in the street. But Aboud, another former resident of the regime stronghold, says he isn't hopeful these protests will have much impact on the Assad regime.

"The maximum this demonstration [was demanding] was just punishment of this cousin of Assad. But we know that it's not about this cousin. The Assad family did many things like this. It's the fault of the regime," he says. 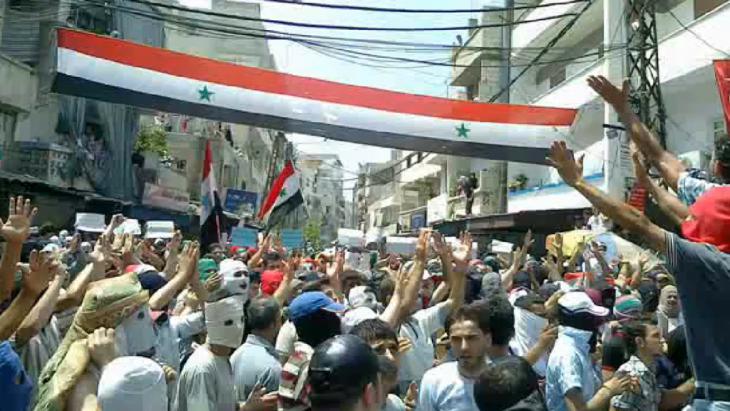 Leila and her husband Mustafa took part in the first demonstrations against Assad in Latakia four years ago. Pictured here: a demonstration in the city on 8 August 2011. Says Aboud, another refugee from Latakia: "At some point, the revolution changed into something else. Now we have 'Islamic State' (IS), we have al-Qaida, we have different conservative Islamic groups. On the regime side, we have Hezbollah, we have Iran. The dream has moved from a revolution to a civil war, a sectarian war. And it's not even a Syrian war any more"

Aboud, who defected from the Syrian army three years ago and now works for an NGO in Antakya, says that under Assad's rule, citizens didn't even dare to think thoughts critical of the regime. Since the uprising started in 2011, it has only become more brutal. He says Latakia, where his family still lives, is terrorised by the pro-regime Shabiha militia; kidnapping is rife. Aboud says that his own father was taken by the Shabiha three years ago and hasn't been seen since.

These days, however, such atrocities have been eclipsed by the brutality of foreign fighters who have piled into the conflict. What is particularly painful for activists like Aboud is that from the start, the regime falsely characterised the peaceful uprising as sectarian, Islamist and under the thrall of foreign interests. Now these accusations have become a reality.

"At some point, the revolution changed into something else," says Aboud. "Now we have 'Islamic State' (IS), we have al-Qaida, we have different conservative Islamic groups. On the regime side, we have Hezbollah, we have Iran. The dream has moved from a revolution to a civil war, a sectarian war. And it's not even a Syrian war any more."

A woman on the frontlines

Leila and Mustafa have witnessed this transformation up-close. Over sweet tea and homemade cheesecake – a new recipe of Leila's using vegetarian jelly – they tell a story of love, betrayal and enduring hope.

Leila describes how her anti-regime activities in Latakia progressed from graffiti and taking part in public protests to smuggling weapons to Free Syrian Army (FSA) fighters hiding out in the mountains north of city. Among them was Mustafa, who went by the name of Assad al-Islam – "Lion of Islam". On one such a mission, Leila says, she received a call from a friend telling her not to come home. The regime was looking for her.

"So I told the guys I wanted to stay," Leila says. "There was the commander, Abu Basir. He said 'okay, you're part of the family now'. And then there was Assad al-Islam. He said, 'no way. What will she do here?'" What she did was to take charge of the munitions store and work on logistics. But the Lion of Islam wasn't happy with the arrangement. When his arguments against her staying fell flat, he had her join the frontline weighed down by flak jacket and weapons. But she passed the test with "grace", he says. Then, away from the base on a conflict mission, he realised he was in love. They were the first couple to be married in a rebel-held area, they say. 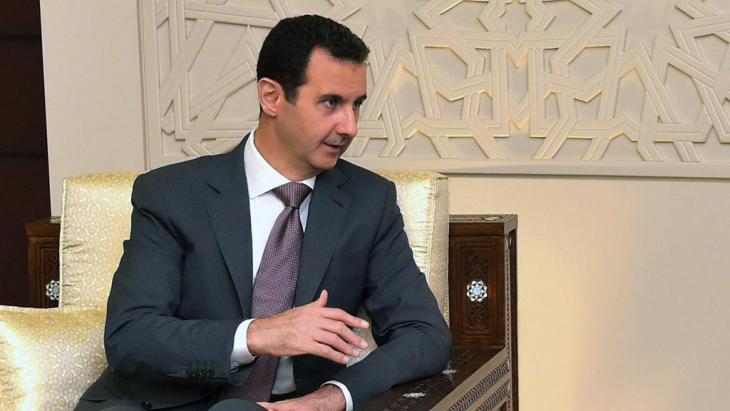 Syrian President Bashar al-Assad. During a meeting on 12 July with a member of the National Assembly of France and leader of the Christian Democratic Party, Jean-Frederic Poisson, Assad warned about the dangers for the region and Europe of terrorism, his characterisation of the opposition the Damascus regime is fighting in the country's ongoing civil war, now in its fourth year, which has claimed hundreds of thousands of lives and caused an estimated four million Syrians to flee the country

But the union was controversial with a particular group of the FSA's allies at the time: IS. Mustafa says his wife's half-Croatian nationality made her a target of suspicion.

"When we were inside Syria, I was constantly expecting IS to attack the base and arrest Leila," Mustafa recalls. "Everyone knows about me that I have this jihadi mentality – even before the revolution. But I asked about this, and their answer shocked me. They said, you are a good man, but because you are married to this woman, who is a spy, you are now changed."

The decisive event for the FSA brigade's relationship with IS came in June 2013, when the Islamist group shot their commander, Kamal Hamami, also known as Abu Basir, the man who had so readily welcomed Leila into the brigade.

"He died because of his honesty and because he wanted to save lives," Mustafa says. "There was a dispute between our brigade and the IS brigades. A meeting was arranged between Abu Basir and the head of the IS brigades in the region. Abu Basir told the men with him to leave their weapons in the vehicles and come unarmed."

This demonstration of good faith was not reciprocated. Mustafa says that 20 minutes into the discussion, he witnessed the Iraqi IS commander shoot Hamami in the head. "It was a turning point in the history of the revolution. Before that, we couldn't see that IS was a serious threat to the Syrian revolution. After this, we took a decision to fight them. "

"The surprise was that the enemy came from people whom we received," Mustafa adds, "people we expected to fight alongside us and protect us. We were never expecting to be betrayed by these people." Mustafa later convinced his wife that she and their daughter – who is now 18 months old – would be safer in Turkey. 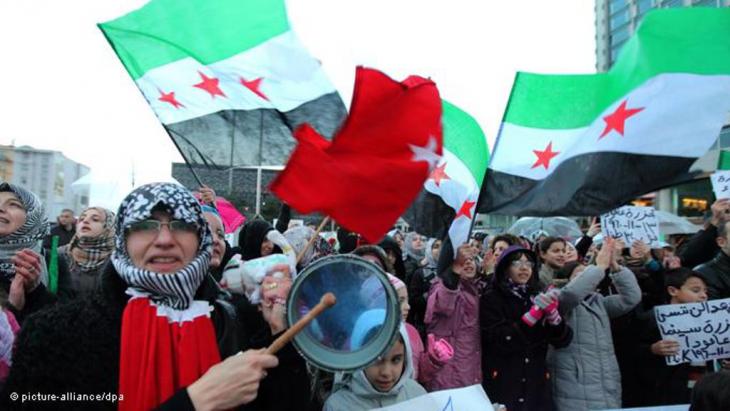 "We don't want all of Syria to think the same way. This is the point of the revolution. I can have my opinion and he can have his. If you're a socialist, a liberalist, an Islamist, it's okay as long as you're not hurting anybody. That has been my hope since the beginning and it still is now: for everyone to have the right to express their views," says Leila. Pictured here: Syrian and Turkish protestors shout anti-Assad slogans during a demonstration in Istanbul, 13 November 2011

Aboud, Mustafa and Leila reminisce together about the early days of the revolution – the hope and euphoria. That doesn't mean the future Syria they envision is the same. Mustafa is a committed Salafist, while Aboud is clear that he wants a secular state. But there is much they all share.

"Mustafa and I have had very different points of view," Leila says. "But in the end we don't want all of Syria to think the same way. This is the point of the revolution. I can have my opinion and he can have his. If you're a socialist, a liberalist, an Islamist, it's okay as long as you're not hurting anybody. That has been my hope since the beginning and it still is now: for everyone to have the right to express their views."

That's a vision they say they can all get behind – bound by a common belief in something much of the rest of the world has given up all hope of. But they are grimly realistic about the challenges head.

"If you want to get back on track to fight for what we initially fought for, you have to take away IS," Leila says. "It's as simple as that. We haven't forgotten what we are fighting for. We cannot forget. But let's be honest. We cannot fight Assad only."

Mustafa continues to cross back into Syria to fight against IS. Leila meanwhile works with Syrian children in Turkey, teaching maths, among other things. But she is frustrated. "Right now we are doing our best to help the revolution. But we can do more if we're inside Syria because those children need us more."

Leila says she is ready to go back – this time with a toddler in tow. "I am trying to plan how we can get there. Now. Tomorrow. The day after tomorrow. But the border is closed. There is IS, there is al Nusra – it's very dangerous. I don't know what's next. But that's the plan, to get back there."

Home
Print
Newsletter
More on this topic
Interview with a survivor of the Suruc attack: "All we want is freedom"Profile: the Syrian–German author Rafik Schami: An exile in his homelandThe civil war in Syria: When minorities become pawns in a power gameThe Assad regime and the civil war in Syria: Clash of barbarisms
Related Topics
'Islamic State' | IS, Assad regime, Refugees, Syrian Civil War, Syrian opposition
All Topics

Arab youth express their hopes and wishes for the New Year, spanning everything from civil and political rights, to education, to arts and culture. By Rafiah Al Talei END_OF_DOCUMENT_TOKEN_TO_BE_REPLACED

Life imprisonment for crimes against humanity: that was the sentence handed down to Anwar Raslan in the world's first trial of a member of the Syrian torture system. Matthias von ... END_OF_DOCUMENT_TOKEN_TO_BE_REPLACED

Moncef Marzouki was Tunisia's first democratically elected president after the fall of dictator Ben Ali. Today he is the most prominent critic of increasingly counter- ... END_OF_DOCUMENT_TOKEN_TO_BE_REPLACED

Historically Iraq's Yazidi community was isolated, under-resourced and very conservative. Seven years after the "Islamic State" tragedy, the community is more open to the world – ... END_OF_DOCUMENT_TOKEN_TO_BE_REPLACED

In this new bilingual edition, translated by Humphrey Davies, al-Jawbari, one of the thirteenth century's leading experts in skullduggery reveals all there is to know about the ... END_OF_DOCUMENT_TOKEN_TO_BE_REPLACED
Author:
Ruby Russell and Louise Osborne
Date:
Mail:
Send via mail

END_OF_DOCUMENT_TOKEN_TO_BE_REPLACED
Social media
and networks
Subscribe to our
newsletter