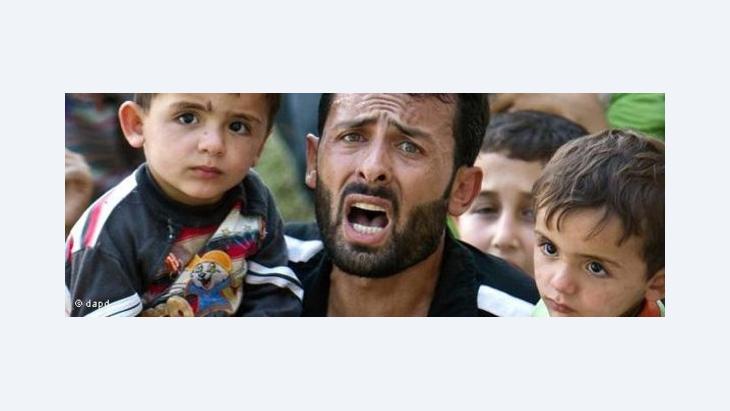 Syrian refugees are arriving in their thousands in neighbouring Turkey. They regard Recep Tayyip Erdogan as their hero. He has in the meantime distanced himself from rulers in Damascus. Daniel Steinvorth reports from the border region

Fatima is lying on a mat. She is exhausted, and is taking a nap. It's early in the morning and a strong wind is tugging at the sides of her tent. Children are playing outside, a baby is crying. Women hang up their washing between the fruit trees to dry, men look for brushwood, girls fetch water from a muddy creek. But Fatima, who is 100 years old, barely registers any of this anymore. Her face is deathly pale.

"She wanted to spent her last days at home in Jsir al-Schugur, not in this wilderness," says her daughter, "but that's probably not going to happen now. Now she'll likely have to die as a refugee." 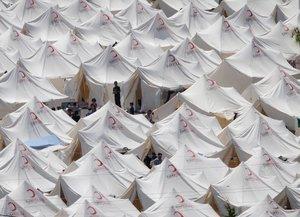 Syrian refugees in the Boynuyogun Turkish Red Crescent camp. About 10,000 Syrians have crossed the border into Turkey to escape bloody unrest in their country

The wilderness she refers to is a hilly terrain of shrubs and olive groves in the western border region between Syria and Turkey. The place where thousands of Syrians have sought refuge from the Assad regime since the outbreak of violence in the northern Syrian town of Jsir al-Schugur. Just trees, thick barbed wire and a road separate the two countries from each other. They are linked by smuggler paths.

But now it's emergency aid that's being secretly brought over the border: bread, blankets, milk, nappies. Dozens of children sneak over the boundary line several times a day, dragging heavy sacks, letting their friends know via mobile phone where the soldiers are currently patrolling. The youngest is not even 10 years old, the oldest barely 20.

They slip through the undergrowth, trudge through streams. They're not afraid. "The most the Turkish soldiers will do is shoot into the air," they say. And they go in and out of the farmers' houses in the Turkish border village of Güveççi like old friends.

Several thousand Syrians have already travelled through this valley to reach Turkey. And that number is growing by the day. Like many others though, Fatima's family initially decided to stay in Syria – for fear of ending up in a crowded refugee camp. The border is now lined with hundreds of tents and hastily erected shelters.

Syrian refugees at the Turkish-Syrian border: Most are from Jisr al-Shughour, the town where Syrian authorities said 120 security personnel were killed in fighting they blamed on "armed groups"

Anyone wanting to talk to refugees from Jsir al-Schugur has to do this on the Syrian side, as the authorities started preventing all contact with the media as soon as people began arriving in Turkey. Turkey accommodated the Syrians in four camps supervised by the Red Crescent aid organisation, and rigorously shielded them from outside world. Blue tarpaulins now block the view through the fence. Police guard the entrances.

"They're doing ok," says an elderly man who's just returning from the camp at Altinözü, an old tobacco factory that's now home to 1,500 people. He's Turkish, but like most people who live in this region his mother tongue is Arabic and a branch of his family lives in Syria. "My daughter was brought here with her children. I'm allowed to visit her every day for one hour. Apart from the bitter Syrian coffee we like so much, they've got everything they need. There's even a playground for the children," he says.

Under the watchful eye of a police officer, he is allowed to hold his mobile phone out to a friend at the gate so that his relative can be informed of his arrival. But he's not allowed to take the mobile phone in. Nobody in the camp is allowed to have a Turkish telephone. Red Crescent employees say that of course, this is a necessary measure to protect the refugees.

But the people in the camps want the world to hear their story. When Turkish Foreign Minister Ahmet Davutoglu visited the camp at Yayladagi, residents staged a protest. "No to Hezbollah, no to Iran, we want Erdogan," they chanted. Many believe that Iranian elite units are among the troops firing on demonstrators. "They have beards, something that's not allowed in the Syrian army, and they can't speak Arabic, they have interpreters with them," claim several refugees in a Syrian camp.

Iran has denied the rumour, but it's no secret that Assad's regime does receive backing from Tehran. The refugees also have nothing good to say about the conduct of Russia and China on the UN Security Council, countries that persist in blocking any resolution thereby giving Syria a free hand. 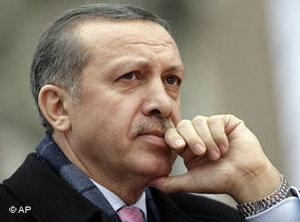 Taking a stand: Turkey Prime Minister Erdogan has long viewed Bashar al-Assad as a "friend", but he has now described the regime's actions as "inhuman", and called for the immediate introduction of democratic reforms

The newly re-elected Turkish Prime Minister Recep Tayyip Erdogan enjoys popularity however: although he has long viewed Bashar al-Assad as a "friend", he has meanwhile distanced himself from the atrocities. He described the regime's actions as "inhuman", and called for the immediate introduction of democratic reforms. He also offered reassurances that the border to Turkey would remain open in any eventuality. "We can't close our door on those who are trying to flee," he said.

Erdogan is holding frequent telephone conversations with Assad and last week in Ankara, he received a special envoy from Damascus, Hassan Turkmani. Turkmani maintained that refugees were already returning to Syria, and that "everything was ready".

But anyone gauging the mood in the tent camp on the Syrian side will detect only one emotion: fear.

The young man who calls himself Mustafa still feels that sense of fear. It's so great that Mustafa doesn't want to give his real name. And he doesn't want to be photographed. But he has something he wants to say. He wants to report what happened in early June in the northern Syrian city of Jsir al-Schugur – the city now regarded by the world as the stronghold of resistance against the Assad regime. Mustafa claimed he saw it with his own eyes.

He tells of the large-scale demonstrations in the city that passed off peacefully until 4 June, a Saturday: "On that day someone fired shots from a passing car. One person died on the spot. We buried him. On the way back from the cemetery everyone resumed their chants of 'freedom' and 'down with the government'. Then snipers started firing from the roof of the post office building. Four people died initially, then someone fired into the crowd, leaving 30 people dead. And then the police suddenly started shooting at each other."

Out of touch with reality: While Syria's President Assad claimed the people love him "more than ever", tens of thousands of regime loyalists rallied in Damascus and at least three other cities

Evidently, says Mustafa, some members of the security forces had refused to fire on the demonstrators although they had been ordered to do so. And as is often the case, the rebels were immediately shot by their superiors. But this time, they shot back.

"We didn't have any weapons ourselves, the exchange of fire only occurred between police officers. Many of them died – on both sides," says Mustafa. No one knows exactly what happened next: everyone quickly grabbed some essential items from their houses and fled to the border just under 20 kilometres away. "We knew that the retaliatory measures would be terrible," he says.

Siege of a ghost town

Damascus announced that 120 security personnel had been killed in battles with "armed gangs" and that the military was preparing to restore order. For a week, tanks besieged the small town. But all those quizzed replied that there were no gangs in the region.No one was carrying weapons. Had the surviving police officers dug themselves in to defy the tanks?

No, Mustafa is sure. "On Thursday 9 June, I took the little truck and drove back to Jsir al-Schugur with four friends to get stuff from our houses. We were scared, we did it as quickly as we could. But there wasn't a soul in sight. Neither from the military, nor the demonstrators."

So why the siege? An elderly man with a greying beard calling himself Abu Mohammed has an answer: "The regime claims all demonstrators are terrorists. Even this one here," he says, stroking the head of a small girl with blonde pigtails. "And so that the world believes this, they have to put on a show." The deserting police officers probably fled into the woods, maybe they still had their weapons, but nothing to match up to the tanks, he adds.

And now? "Wait until Assad falls," says Mustafa. "Yesterday two families went back to Jsir al-Schugur. They were immediately shot by the military. Fifteen people." No, no one can go back, he continues. He points at the tent where Fatima is lying. Assad better hurry up and stand down: the 100-year-old lady doesn't have that much time left.

Any reconciliation between Turkey and Syria’s Assad regime would have disastrous consequences for many Syrians, explains Syria expert Kristin Helberg END_OF_DOCUMENT_TOKEN_TO_BE_REPLACED

Iraq bears the scars of decades of conflict and has seen its antiquities plundered, yet the House of Manuscripts' collection has managed to survive END_OF_DOCUMENT_TOKEN_TO_BE_REPLACED

As Syrian camps housing families of Islamic State fighters get more dangerous, there are calls to bring children out, even if the mothers don't want to go. The idea of separating ... END_OF_DOCUMENT_TOKEN_TO_BE_REPLACED

Morocco has taken the 2022 World Cup by storm, with the northwest Africans reaching the semi-finals for the first time in their soccer history. As the knockout match approaches, ... END_OF_DOCUMENT_TOKEN_TO_BE_REPLACED

The Islamic Republic has been unable to quell the civil unrest that erupted three months ago, after Mahsa Amini died after being detained for violating hijab rules. Now the ... END_OF_DOCUMENT_TOKEN_TO_BE_REPLACED

The Kurds are under attack from two sides: from Turkey, and from Iran. The situation in their territories in northern Iraq is becoming increasingly desperate. Birgit Svensson ... END_OF_DOCUMENT_TOKEN_TO_BE_REPLACED
Author:
Daniel Steinvorth
Date:
Mail:
Send via mail

END_OF_DOCUMENT_TOKEN_TO_BE_REPLACED
Social media
and networks
Subscribe to our
newsletter