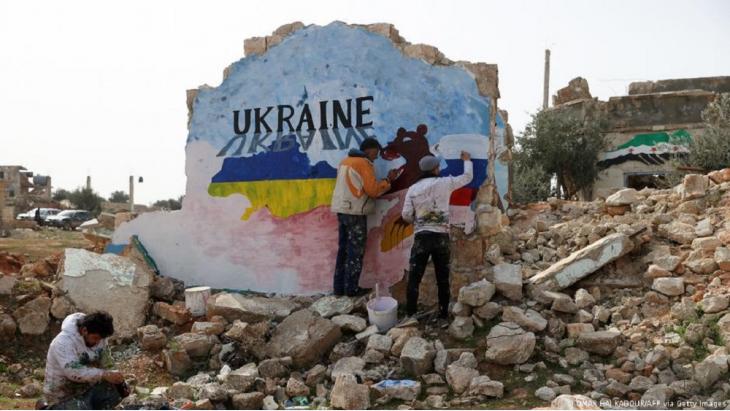 Syrians and the Ukraine war
"We share a similar suffering"

Syrian opposition activists say they know what it's like to go up against the Russian military. Some experts think things may have turned out differently in Ukraine if the West had stood up to the Kremlin over Syria. By Diana Hodali

"I very much feel for the people of Ukraine," says Huda Khayti, the head of a women's centre in Idlib. "It's terrible to see how ruthless Russia is also in Ukraine. Vladimir Putin does what he wants, nobody has ever set limits on him. We Syrians know what we're talking about," she explains. She's not originally from Idlib, but like hundreds of thousands of Syrians, she became an internally displaced and had to flee several times to survive.

Khayti has often seen just how cruel the bombing raids from Putin's military can be. Back in 2018, she had to leave East Ghouta, near Damascus, because Russia, alongside Syrian ruler Bashar al-Assad, was bombing the area to the ground. "I come from Douma and survived a poison gas attack by the Syrian regime. I know what it's like to live under a hail of bombs or to be cooped up like I was in East Ghouta," she says.

In the spring of 2018 she finally came to Idlib province. All opposition and rebel groups alike then moved into the province, which is now controlled by the Islamist group Hayat Tahrir al-Sham (HTS), which is close to al-Qaida. Supported by the Russian military, the Syrian Air Force has repeatedly attacked the province. Human Rights Watch (HRW) has ruled that Syrian and Russian civil and military officials are involved in war crimes because of their command responsibilities.

The scale of the destruction in Syria would not have been possible without the Russian President's military support for Bashar al-Assad. In 2015, it actually looked like he might be losing the war, but that same year, Moscow intervened at the request of the regime in Damascus. Unlike the invasion of Ukraine, Russia's intervention was therefore not in breach of international law.

Vetoes at the UN Security Council

Nevertheless, rules governing war were consistently violated: together with its allies in Iran, Russia and the Syrian government attacked hospitals, schools and markets in order to recapture areas from al-Assad's opponents. The use of barrel bombs, cluster munitions and vacuum bombs, which violate international law, has been thoroughly documented. 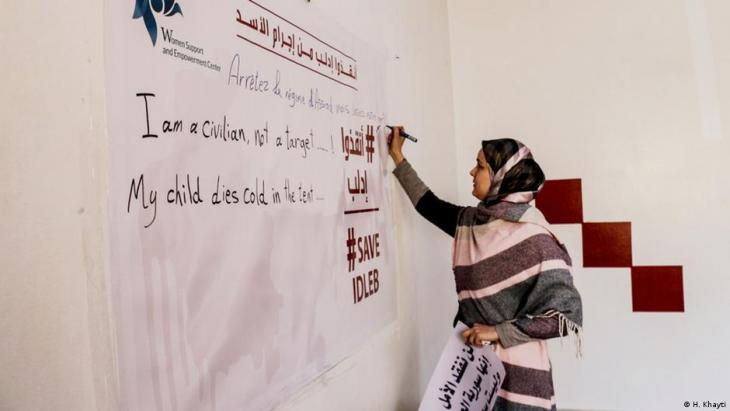 "We share a similar suffering. We know better than anyone else in the world what Ukraine is going through right now," says Huda Khayti, the head of a women's centre in Idlib. But there also is a stale aftertaste for Khayti. "There have not been such harsh sanctions in so many years of war in Syria," says the women's rights activist. She also points to the somewhat lopsided treatment of refugees in Europe. "There seems to be something like first-class and second-class refugees"

A UN report released in 2020 investigated various atrocities in Syria and concluded that Russia's military was directly implicated in war crimes by indiscriminately bombing civilian areas. But neither al-Assad nor Putin have faced serious consequences.

As a permanent member of the United Nations Security Council, Moscow has blocked at least 16 resolutions on Syria. This has prevented crimes committed by the Syrian regime from being referred to the International Criminal Court in The Hague.

"All the events in Syria should have raised the question of how far it is possible for a permanent member of the UN Security Council to be able to decide over a war it is itself involved in," says Bente Scheller, director the Middle East and North Africa Department of the Heinrich Boll Foundation. According to Scheller, this setup is outdated and a different format is needed. But so far, all attempts to restructure the UN Security Council have failed.

Has the West looked the other way in Syria? "No," says Scheller, explaining that it didn't ignore these crimes – but also couldn't get itself to act. The question of who would take over in Syria after Assad, were there to be regime change, was raised again and again. "I think that was the most dangerous development because it called international norms and standards into question. It is absolutely clear that civilians must be protected." When Western countries eventually decided to intervene militarily in Syria, it was more about fighting Islamic State (IS) terrorist group than protecting the population.

The rules of war

3. Civilians must have safe passage to flee.

4. Humanitarian organizations must have access to deliver aid to civilians.

The "red lines" with regard to possible poison gas attacks by Assad, which former U.S. President Barak Obama proclaimed in 2012, also proved extremely elastic in the Syrian war. At the time, Putin publicly committed Assad to destroying his chemical weapons stockpiles – and thus provided Obama with an excuse not to have to intervene militarily, despite the red lines being crossed. In the short term, this was a win-win situation for the powers involved, but not for the people: there was, after all, another poison gas attack in 2013.

Could we have learned from Syria? "Yes," believes Khayti. "Due to the inaction of the international community in Syria, Putin was given the green light to take brutal action elsewhere." The Russian president has therefore had nothing to fear. In Ukraine, Putin's army has already bombed civilian facilities. According to HRW, cluster bombs have also been used there, just as they were in Syria.

Whether propaganda wars, the use of brutal mercenary groups or war crimes, "Putin was able to try out his weapons and warfare technology in Syria," says Bente Scheller. "These are all precursors from which he was able to draw the lesson: He has nothing to fear from the West." The Kremlin leader has also come a long way diplomatically in Syria. "And in the coming summer, Putin will once again have the opportunity to put pressure on Western states, because then the decision on humanitarian aid for Idlib will come up again."

In Idlib province, people receive direct humanitarian aid from abroad - only the Bab el Hawa border crossing is still kept open by Russia for this purpose, but it is also Russia that decides every six months in the UN Security Council, with the right of veto, whether Bab el Hawa should be closed or not. In Ukraine, millions of people are already dependent on aid. Ukraine and Russia have agreed to create humanitarian corridors. 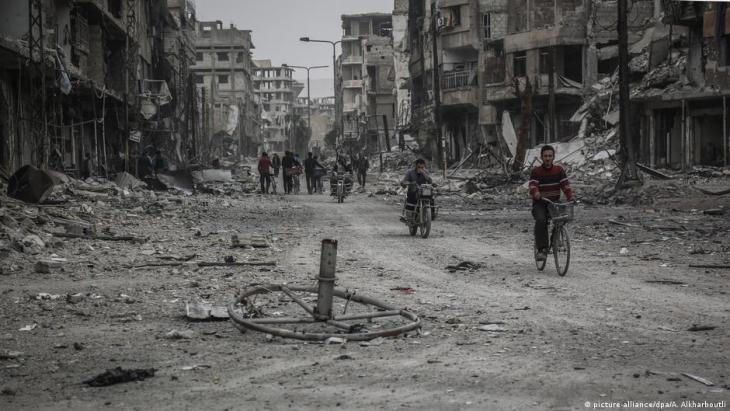 East Ghouta near Damascus in ruins – also due to Russian military. Without Russia's military support, it would not have been possible for Bashar al-Assad to destroy Syria on such a scale. In 2015, it actually looked as if Assad might lose the war. But Moscow intervened in the same year – at the request of the regime in Damascus. Unlike the Ukraine war, Russia's intervention was not formally illegal under international law. Nevertheless, there were numerous violations of international law: Together with Iran, Moscow and Damascus attacked hospitals, schools and markets to retake areas from Assad's opponents. The use of barrel bombs, cluster munitions and vacuum bombs in violation of international law has been documented many times

Return of a trauma

Even if crises and wars are not always comparable, says Khayti, "I wonder whether an attack of this kind on Ukraine would have been possible if the world had previously taken a more determined stand against Russia's interference in the Syrian war."

She is relieved that the Russian government is now being met more harshly, at least with regard to Ukraine. "I wish that the Ukrainians would be spared years of suffering," says Khayti.

Many Syrians would like a direct channel to the Ukrainians, she explains, to tell them, for example, how best to protect themselves. Some would even like to fight alongside the Ukrainians against the Russian military, she says. "We share a similar suffering. We know better than anyone else in the world what Ukraine is going through right now."

But there also is a stale aftertaste for Khayti. "There have not been such harsh sanctions in so many years of war in Syria," says the women's rights activist. She also points to the somewhat lopsided treatment of refugees in Europe. "There seems to be something like first-class and second-class refugees."

She hopes that the fate of Syrian refugees will also be taken very seriously: there are still people drowning in the Mediterranean, or freezing to death at European borders or stuck in makeshift camps in Greece for years.

Still, there are hopes in Idlib that the tide could turn against Russia's government in both Ukraine and Syria – and that the world might also treat the Syrians with more empathy, in view of the war still continuing in their country.

Drought and upstream water diversions have seen the Zayandeh Rood, "fertile river" in Persian, run dry since 2000, with only rare exceptions. The famed river bridges of the ... END_OF_DOCUMENT_TOKEN_TO_BE_REPLACED

Very different Western reactions to the suffering in Ukraine and the Arab world show that there is a profound rift among cultures. Essay by Michael Young END_OF_DOCUMENT_TOKEN_TO_BE_REPLACED

Since the government cut subsidies for food, prices in Iran have skyrocketed. Protests that broke out in Khuzestan province are now spreading across the Islamic Republic. By ... END_OF_DOCUMENT_TOKEN_TO_BE_REPLACED

United Arab Emirates strongman Sheikh Mohammed bin Zayed al-Nahyan, who was formally elected president on 14 May, has led a realignment of the Middle East, creating a new anti- ... END_OF_DOCUMENT_TOKEN_TO_BE_REPLACED

More than 800 Iranian filmmakers have signed a declaration against sexual harassment, coercion and violence in their industry. The public's response to their willingness to name ... END_OF_DOCUMENT_TOKEN_TO_BE_REPLACED
Author:
Diana Hodali
Date:
Mail:
Send via mail

END_OF_DOCUMENT_TOKEN_TO_BE_REPLACED
Social media
and networks
Subscribe to our
newsletter