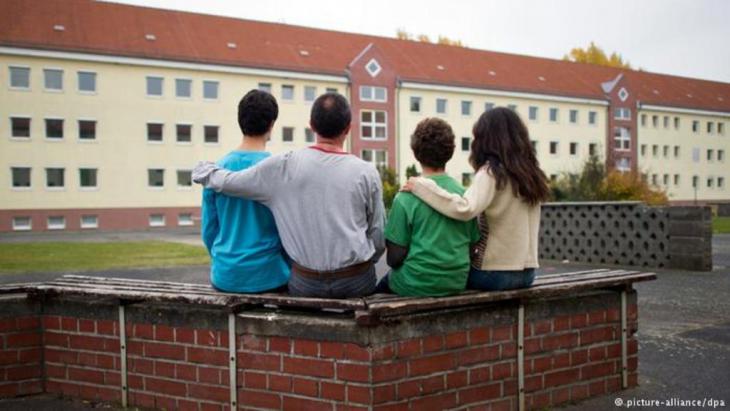 The need to find a voice

There are far more pressing issues for Syrians living in exile in Germany than the much-discussed topic of integration, writes Syrian author Tarek Azizeh. Getting organised and participating in public life is a top priority

Germany has taken in most of the roughly one million refugees who have made their way across the Mediterranean to Europe in recent years. Information and estimates on the actual number of Syrians living in Germany naturally vary and are undoubtedly sometimes overstated.

A wide variety of sources, however, clearly indicate that in terms of absolute figures, Syrian women and girls currently make up the largest group of refugees and asylum seekers in Germany.

I think it is safe to say that our stay here will not be a short one. Many Syrians are working hard to overcome the language barrier, which is no great hurdle for those who really want to. And for those who do overcome the language barrier – especially if they have academic or professional qualifications – there are opportunities on the labour market waiting to be grasped. Indeed, many have already gained a foothold on the labour market.

Training and jobs are paramount

Finding work means no longer having to be dependent on the state and being able to earn their own living. In the medium term, this means the chances of establishing a stable existence are good. Moreover, within the framework of German law, it also opens up the possibility of renewing a residency permit on the basis of employment, rather than on the original humanitarian grounds for granting asylum.

After all, it is safe to assume that when these humanitarian grounds no longer exist, many Syrians – unless they meet certain criteria – will not be granted a new residency permit. Crucially, this means that they will have to be able to speak German, hold down a job and earn their own living.

Those, however, who are not as highly trained or well qualified will not be in a hurry to return to Syria – voluntarily or otherwise. The reason for this is that despite the much-cited international effort to find a political solution, there is nothing to indicate that a strategy to end to this humanitarian catastrophe is likely to materialise any time soon.

In other words, they too will remain in Germany for the unforeseeable future. Nevertheless, that doesn't mean that they should just carry on as usual and expect that they will continue to be granted asylum because of the conflict in Syria. This is illustrated by the fate of thousands of families from the countries of the former Yugoslavia, Iraq and elsewhere, who faced deportation after the grounds for their asylum no longer existed.

As indicated above, it is clear that there is now a relatively large "Syrian community" in Germany. Indeed, it is quite possible that a "Syrian society" is emerging here (and in other host countries too).

Working on issues of common importance

For us Syrians living in exile, this means we must make a serious effort to address a wide variety of pressing issues that go far beyond the much-discussed issue of integration. In other words, we must seek ways of organising ourselves as a group, with a view to improving our living conditions and rising to the challenges that are inherent to our new lives. Why? Because as a group that has practically become part of the population of this country, we face more or less the same difficulties and hurdles. In this respect, there common issues that we should work to defend and to advance.

The need to become organised as a group is even more urgent in the face of the role being played by the Syrian diplomatic corps. Rather than looking after the country's citizens, as it should, it is acting as the long arm of the authoritarian regime, protecting the regime's interests and seeking to burnish its image.

It should not be forgotten that, as part of its "security brief", the corps has been on a dirty mission for decades, keeping a close eye on Syrians living abroad (especially opposition activists), watching their every move. Owing to the reports sent home to Syria from embassies around the world, many Syrians who spent time working or studying abroad were arrested by the secret service on their return!

No withdrawal from society

Naturally, "getting organised as a group" does not mean withdrawing into homogenous districts ("ghettos"). Nor does it mean that we should shut ourselves off from society, whether under the banner of "cultural individuality" or in reaction to the deficiencies or even failure of Germany′s integration policy. In this context, permit me a word of warning about certain players, whose dubious role consists of misleading new arrivals by exploiting their religious feelings, thereby leading them down the path to ruin.

What we need are voluntary clubs, associations and organisations where Syrians can work together to make their voice heard in civil society and work on the issues that matter to them. Throughout the many decades of authoritarian rule in Syria, this has not been possible. During all this time, all forms of assembly, organisation and free speech on matters of civil importance were unavailable to Syrians.

Now, however, thanks to the democratic freedoms of Germany, Syrian refugees have a wonderful opportunity to gain this experience. That said, getting organised as a group first cannot, of course, be viewed as a substitute for future involvement in "German" clubs, associations and trade unions, not to mention active involvement in civil society and its institutions.

Even if all Syrian refugees came to Germany to escape an unexpected crisis, it is of no benefit to them to live their lives here as if their situation in Germany is only temporary. It would be better to think like a "migrant" who has come to stay and not like a "refugee" who is passing through.

To conclude, I would like to say this: let us live for our country as if we were returning tomorrow and for our new home as if we were staying forever.

In her documentary, the young Palestinian filmmaker Samaher al-Qadi gives us a passionate and very personal view of what it means to be an Arab woman. Her film explores the ... END_OF_DOCUMENT_TOKEN_TO_BE_REPLACED

The Hanau terror attack showed just how dangerous racist conspiracy theories can be. And yet it is a threat that continues to be underestimated. Commentary by Daniel Bax END_OF_DOCUMENT_TOKEN_TO_BE_REPLACED

How can we truly appreciate the richness of cultures not our own? In her recent book "What is Islamic art? Between religion and perception", art historian Wendy Shaw explains the ... END_OF_DOCUMENT_TOKEN_TO_BE_REPLACED

In his controversial book published in 2020, French author Pascal Bruckner describes anti-Muslim sentiment as a fiction, claiming that the term "Islamophobia" is being used to ... END_OF_DOCUMENT_TOKEN_TO_BE_REPLACED

Islam scholar and social anthropologist Marie-Christine Heinze is head of an academic exchange project with the University of Sanaa on "Post-conflict Reconstruction in Yemen". In ... END_OF_DOCUMENT_TOKEN_TO_BE_REPLACED
Author:
Tarek Azizeh
Date:
Mail:
Send via mail

END_OF_DOCUMENT_TOKEN_TO_BE_REPLACED
Social media
and networks
Subscribe to our
newsletter