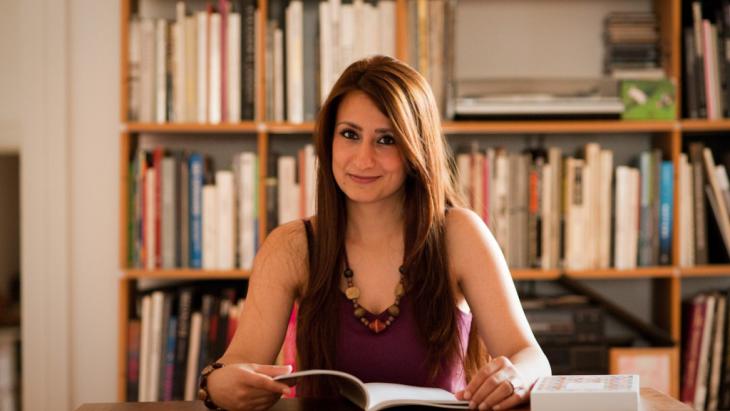 Syrians in Germany
Writer Widad Nabi: ″Integration is the search for common ground″

Faced with war and death in my home country I fled to Germany, no longer a writer but a refugee. For me it′s the chance to start over and find my way in this wonderful country. Essay by Widad Nabi

We have acquired a new title that will accompany us to our last breath: refugees. This is what I realised on my first day in Germany, 12 August 2015, as I stood in what seemed like an endless line in Berlin′s Office of Health and Social Affairs, to register myself officially as a refugee. From now on I would be Widad Nabi, refugee.

I had crossed seven countries fleeing death – the same death that is still reaping the souls of people at home, as we speak.

I sought refuge in a country about which I knew next to nothing besides the poems of Rilke and the writings of Goethe, Holderlin, Gunter Grass, Herta Muller and Heinrich Heine. Perhaps it was particularly the poems of Rilke that drew me to this country, which opened its heart and embraced many Syrians. 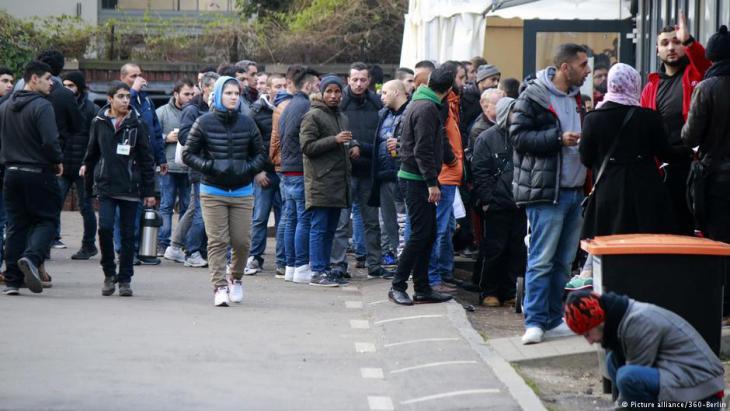 Facing a long and tiring wait outside Berlin′s Office of Health and Social Affairs (LaGeSo): " What I found most humiliating and cruel was how I had to stand in such a line, merely for the fact that I was fleeing the violence of war; I did not choose to leave my home in pursuit of other dreams such as work or education," writes Widad Nabi

Yet on that day, 12 August, I saw the other, unfamiliar faces of Germany. I met with the unpoetic and the non-literary, the callous face of bureaucracy on one hand and the reticent affection the locals bashfully displayed towards us – those forced to flee their homes by an ongoing war that no one seemed willing to end.

I asked myself then, do they still recall their own history with the war and the devastation they brought down on their own cities? Is that why they seem to feel with us?

Then I realised that emotions change nothing in a country wallowing in bureaucracy. I had to move from Berlin to a refugee camp in Eisenhuttenstadt. It resembled a detention camp with its surrounding fence; the sour-faced security officers in blue uniforms and acerbic expressions; and the long wait to get one′s simplest needs met.

I began to sink into despair and had to deal with the same agonies as everyone else: the hardships of acclimatising; the heaps of paperwork; the disdain of public servants. 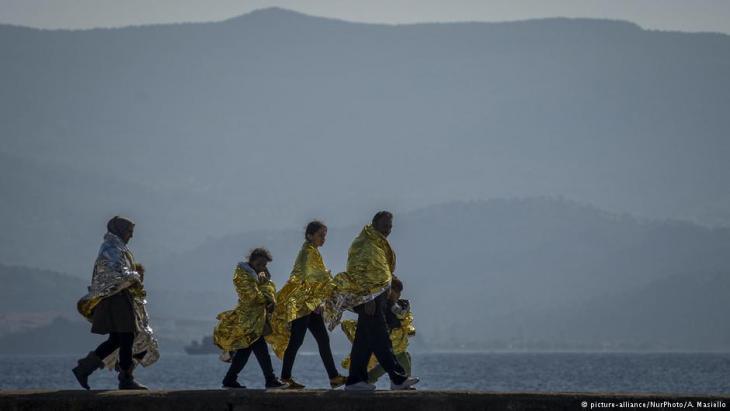 Fleeing death and destruction: more than eleven million people have been displaced as a result of the Syrian civil war, which began in 2011 with demonstrations against dictator Bashar al-Assad. There are currently 65 million refugees worldwide

Their looks said it all –I had gone from being Widad, the young poetess, into a mere binder of documents. That binder became more significant than my whole existence. Every document was so important that it could rob me the chance of proving my status as a legally-documented refugee.

Luckily, however, it was not too long before I finally relocated to Berlin, where I had to start from scratch and begin my life anew.

With open arms, Berlin embraced me and let me into its mysteries. I bonded with its libraries, coffee shops and historic neighbourhoods. I met the city′s many faces and enigmas and read my poems in some of its hottest spots.

There I found the opportunity to meet Germans and get to know them. They were very friendly, most of them stood in solidarity with the traumatic events that were taking place at home.

As a young woman, an avid reader and a writer, I found myself gradually becoming one of the locals in Berlin, a city that embraces foreigners and welcomes poets, eccentrics, capitalists, beggars, fanatics and progressives alike.

The libraries, shelves laden with books in a language still somewhat unfamiliar to my ears, were most inviting: they were the master key to finding my way in the Berlin community.

Failing to be convinced by the hype about integration courses, I followed a path that led to the heart of the city – tracing the footsteps of other writers and poets before me. Thus I got to know Berlin and became one of its inhabitants. 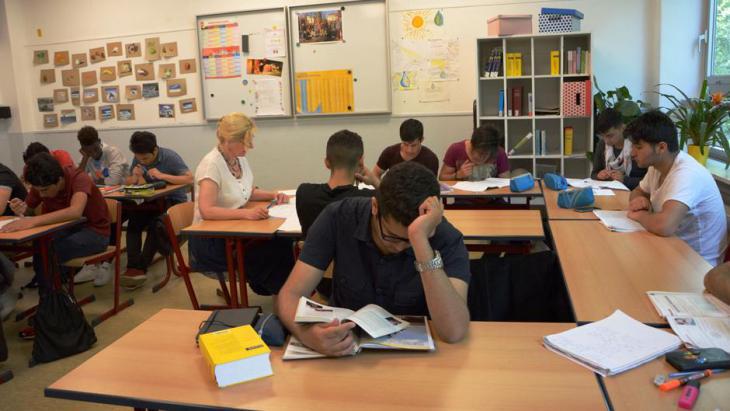 Language learning key to integration: "German is difficult. It remains the principal barrier for me. Yet without a good command of the language, one cannot overcome the feeling of foreignness," admits Widad Nabi

Language remains the principal barrier. German is difficult, yet without a good command of the language, one cannot overcome the feeling of foreignness. I think about my mother and my other relatives in their fifties, who were never even educated in their native language, how would they be able to integrate in a such new and unfamiliar environment?

Language courses are not enough: people need the support of the German community, they need more social events where they can meet with their fellow citizens up close and personal.

A haven in poetry and literature

Naturally every story of integration begins with difficulty. Yet, ultimately they will all find a way of communicating, even if in the beginning much remains confined to the realm of body language and gestures.

Integration is not a garment we put on and – voila! – instantly become German. It is rather the acceptance of cultural differences and the search for common ground.

I found my haven in poetry and literature, they were my gateway to integrating with the local community and I am certain that everyone else has their own key.

I remain hopeful that the war will end soon and that Syrians will be able to return to their homes. They would still come to visit this beautiful country that sheltered them when they were most vulnerable; when most countries around the world copped out on the destruction of a country and the displacement of millions of its inhabitants.

Maybe I will return to Syria when the war is over, maybe not. I don’t know. What my future holds depends on this wonderful, free country of Germany.

Translated from the German by Ibtihal Mahmood

Widad Nabi was born in the Syrian town of Kobani in 1985. These days she lives in Berlin. The Kurdish-Syrian poet and writer has a business degree from the University of Aleppo. She has contributed to numerous Arabic newspapers and magazines. Some of her work has appeared translated into English and French. In 2013, Widad Nabi′s first book, ″Time for love, time for war″ was published in Aleppo. A second publication, ″Syria and the futility of death″, appeared in Beirut in 2016. Last year, several of Widad Nabi′s poems were included in the ″Weg sein – hier sein″ anthology published by Secession.

A new exhibition, "Syria – Against Forgetting", at Cologne’s Rautenstrauch-Joest-Museum focuses on Syria's artistic and cultural heritage and pays tribute to the country before ... END_OF_DOCUMENT_TOKEN_TO_BE_REPLACED

Madrid's about-face on the Western Sahara conflict has enraged Algeria. Trade relations have been frozen unilaterally and a cut in gas supplies to Europe could be in the pipeline ... END_OF_DOCUMENT_TOKEN_TO_BE_REPLACED

Yazan Khalili is spokesman for The Question of Funding, a collective of artists taking part in the leading German contemporary art festival Documenta 15. Here, he responds to ... END_OF_DOCUMENT_TOKEN_TO_BE_REPLACED

Mourad al-Marouai was just nine when a landmine killed him on a beach in war-torn Yemen, a tragedy that will haunt his family forever. After a swim, the little boy "suddenly ... END_OF_DOCUMENT_TOKEN_TO_BE_REPLACED

This year’s Morgenland Festival opened with the premiere of Kinan Azmeh’s musical theatre piece, “Songs for Days to Come”, based on fifteen poems by contemporary Syrian poets. ... END_OF_DOCUMENT_TOKEN_TO_BE_REPLACED

A ceasefire has been in effect in Libya for the past year and a half. Yet after Russia's attack on Ukraine, another proxy war looms in Africa's most oil-rich country. Mirco ... END_OF_DOCUMENT_TOKEN_TO_BE_REPLACED
Author:
Widad Nabi
Date:
Mail:
Send via mail

END_OF_DOCUMENT_TOKEN_TO_BE_REPLACED
Social media
and networks
Subscribe to our
newsletter