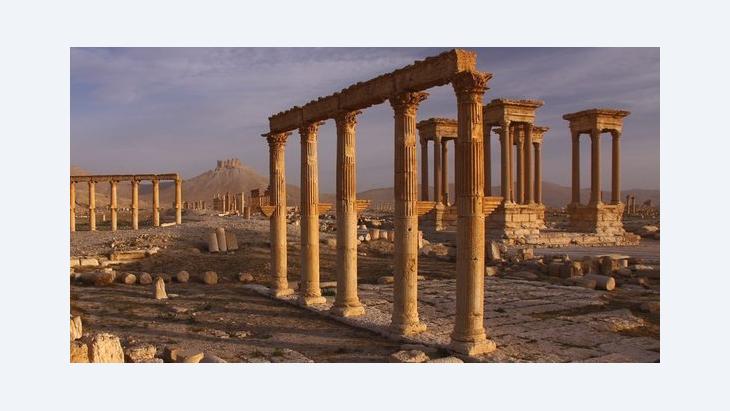 Under Threat from Bullets and Thieves

﻿Syria's unique ancient treasures are another victim of the escalating conflict. With no regard for their historical significance for the country and the world, museums are being plundered, works of art sold off and ancient, Byzantine and medieval archaeological sites shelled and stripped of their treasures. Andreas Kilb reports

In the second century BC, Apamea on the bank of the Orontes River was a major Mediterranean metropolis. The Seleucid King Antiochus set up camp here with his army and 500 war elephants before crossing the Euphrates in the spring to battle with the invading Parthians from the Asian steppes.

Around the time of the birth of Christ, the city and its surrounding lands boasted a population of a half a million. A century later, after a devastating earthquake, thermal baths were built and a 2-kilometre-long, 40-metre-wide thoroughfare lined on both sides by twenty-metre-high columns was constructed from the north to the south of the city. In the twelfth century, Crusaders and Arab emirs fought over Apamea. With the exception of an ancient fortress situated on a hill, the city was later abandoned. Whoever sees its ruins does not need computer images to get an idea of the splendour of this Greek-Roman city.

Today, the rows of columns in Apamea are directly in the line of fire. A video filmed on 15 March shows a tank firing over the ruins from a nearby hill and the impact of an artillery shell in the Qal'at al-Mudiq citadel on the north side of the plateau. There, behind the bullet-ridden 3,000-year-old walls, a unit of the Syrian army later set up camp. Bulldozers broke holes in the wall to provide a free line of fire for the tanks. Earlier, the museum in the caravanserai at the foot of the hill was broken into and Roman mosaics from the city's ruins were removed using drills and chisels and carted off. Apamea now belongs to snipers and the black market. 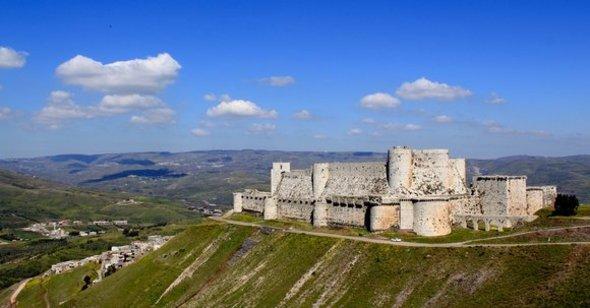 Krak de Chevaliers: this medieval fortress, which dates from the twelfth century, was used by Crusaders for defence and to monitor the route from the Mediterranean coast to the hinterland. Up to 2,000 men were stationed here at a time. The fortress is currently occupied by Assad's soldiers.

A civil war is always a cultural catastrophe because it turns the entire life and history of a country – houses of worship, museums, old town quarters and cemeteries included – into a war zone. In the case of Syria, the civil war is taking place in a country that possesses enormous significance for the cultural history of mankind – a fact that has only really been appreciated over the past few decades.

For example, it was only in the 1930s that the settlement hill of the large Sumerian city of Mari was first excavated. The 1960s saw the discovery of Ebla, which was a flourishing centre in the second and third millennia BC. Only since the 1980s have scholars been able to understand more about the ancient necropoles located in the Limestone Massif region of northern Syria, which has been declared a World Heritage site. Ugarit, a city dating back to the twelfth century BC where the oldest alphabetic script was discovered, was only uncovered in 1930.

Assur, Babylon, Troy and Luxor were all long famous by the time the antiquities of Syria were awakened from their subterranean slumber. To this day, the Syrian sites have not caught up with their more famous counterparts. One encounters a hundred times more people who have been to Leptis Magna or the Valley of the Kings than have seen Apamea or the early Islamic façade of the desert palace of Qasr al-Heir al-Gharbi in Damascus, although these sights are in no way inferior from a cultural or historical perspective to the aforementioned ones.

Perhaps this is why the catastrophe that has befallen Syria's cultural treasures has not truly sunken into Western consciousness. Fighting in Syria has been going on since last summer and, for months now, reports about destruction and plundering have been posted on the websites of those working to conserve historical monuments. Nevertheless, this barbarous behaviour has not caused a general outcry. In mid-May, Emma Cunliffe of the Global Heritage Fund published a study that provided, for the first time, a detailed report on the state of archaeological sites in Syria. 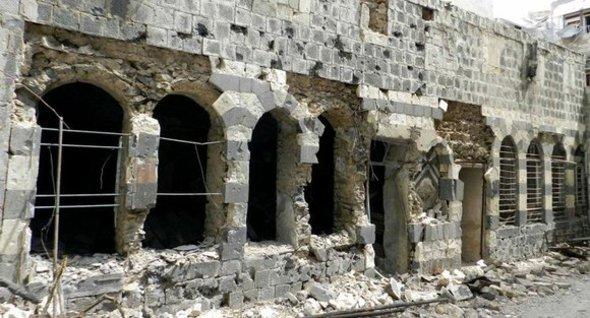 Houses in medieval districts of Syrian cities are not surviving the conflict unscathed; in Homs, for example, one of the strongholds of the opposition to President Assad, the Old Quarter of the city has been particularly badly hit

Cunliffe's findings are devastating. From the excavations in Tell Halaf near Turkey to the late Roman and early Islamic monuments in Hauran near the border with Jordan, the Syrian antiquities authorities are not in a position to protect the treasures on a single site. Museums have been plundered, golden statues and bronze weapons carried off, mosques and churches have been pockmarked by grenades and ancient stones have been misused as roadblocks.

The old quarter of Homs, already the site of a massacre in 1982, has been largely destroyed. The Al-Omari mosque in Daraa, with foundations that were built at the time of the first caliphs, has met a similar fate. Tanks now roll down the streets of the ancient Nabatean city of Bosra, which once served as the main camp of the Roman Third Cyrenean legion. The early Christian monastery of Deir Sunbel has been transformed into a military base. The list of lost heritage sites is long and grows longer every month because there is no longer any civil authority that is capable of preventing the destruction.

Syria's cultural riches are the result of the country's geographical location. For 4,000 years, from the time of early advanced civilizations living between the Tigris and Euphrates to the victorious advance of Islam, the spheres of influence of various powers – including the Sumerians, Babylonians, Egyptians, Assyrians, Hittites, Persians, Greeks and Romans – intersected in this region. The architectural landmarks of this historical melting pot can be seen in the oasis city of Palmyra, where Parthian and Hellenistic-Roman building elements coalesced to form a unique local style. The city's fame was not completely forgotten during the Middle Ages, but it once again achieved prominence with the arrival of British travellers in the eighteenth century. Palmyra used to be swollen with tourists every spring and autumn. 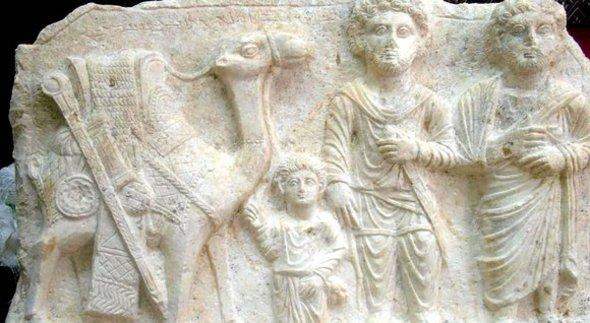 Easy pickings for art thieves: because no civilian authority is in a position to stop the plundering and destruction, archaeological sites and museums are being stripped of their treasures. The situation is exacerbated by the fact that many of these treasures have never been either catalogued or photographed, which makes them easy to sell on the international art market

﻿Now, the massive complex is empty. The necropoles in the Valley of the Dead, which were plagued by robbers even in the late Antiquity, have once again been plundered. Assad's soldiers have billeted themselves in the Mamluk fortress, which was built in the thirteenth century to protect the oasis from attacks by Crusaders, and are firing on anything and anyone moving among the ruins. The splendid processional thoroughfare with its Corinthian columns, the triumphal arch dating back to the reign of the Severan dynasty, and the exterior walls of the temple of Baal have all been riddled with bullets. At night, looters scour the area and attempt to ferret out buried treasures, only fleeing when they come under fire.

As in Palmyra and Apamea, government troops have transformed other cultural heritage sites into artillery positions. Take, for example, the Crusader fortress of Krak des Chevaliers, which is the most well-known mediaeval fortress complex after the Tower of London. There are numerous different versions of the events that have recently taken place there. The official version is that "armed groups" locked out the custodians so that they could plunder the site unhindered. Other reports claim that soldiers used the breaking up of a peaceful demonstration as an excuse to occupy the fortress.

The castles in Margat and Shmemis were occupied in a similar manner. Should the militant forces within the Syrian opposition come into possession of heavy artillery, one can only imagine what will become of such world heritage sites as Krak des Chevaliers. 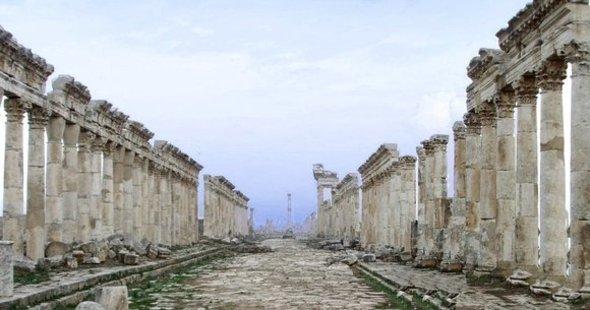 One a splendid Roman street, now a thoroughfare for tanks: Apamea is situated at the heart of the conflict area; the ancient ruins are gradually being destroyed by the shells, grenades, and bullets

The end of a research era

The situation in Syria's museums is no less dramatic. Many of them are situated in areas where fighting rages: for example, the museum in Idlib, which houses most of the invaluable Ebla clay tablets, and the museums in Hama, Deir ez-Zor and Suweida. As far back as July 2011, the Assad government published a memorandum warning against the activities of networks of technically well-equipped art thieves. Since then, some valuable items from museums in Damascus and Aleppo have apparently been deposited in the safe of the Syrian state bank.

Yet the vast majority of the country's treasures remain unprotected from armed plunderers. As was the case in Iraq, numerous cultural artefacts have never been systematically catalogued or photographed, which makes it easer for dealers in stolen goods to sell their booty on the international art market. To make matters worse, the law in Germany makes it difficult to detect stolen art. Although Germany finally signed the UNESCO convention on the protection of cultural property five years ago, objects of "indeterminate origin" – namely those items sold through dubious channels – do not have to be registered in order to be sold.

Karin Bartl, director of the Damascus branch office of the German Archaeological Institute, was last in Syria this past December. She says that many of her local co-workers have fled to their families in the countryside. In August, the institute's excavation house in Hama was the site of uncontrolled shooting. Recently, says Bartl, she took bird's eye look at the house using Google Earth. "It looks as though it is still standing, but if the fighting continues, one can only imagine what it will look like in a year or two." The art historian sees the civil war as ending an epoch in archaeological research. "The Syria that we knew will no longer exist."

"For Sama", the film by Waad al-Kateab and Edward Watts that was crowned best European documentary at the last European Film Awards, gives us a very personal view of the war in ... END_OF_DOCUMENT_TOKEN_TO_BE_REPLACED

The recent escalation of violence in Idlib is also a result of the increasing tensions between Turkey and Russia. The victims are those in Idlib, caught up in a hopeless situation ... END_OF_DOCUMENT_TOKEN_TO_BE_REPLACED

A newly leaked document confirms how China is imprisoning Muslim minority Uighurs based solely on their religion. Naomi Conrad met with a whistle-blower and visited relatives of ... END_OF_DOCUMENT_TOKEN_TO_BE_REPLACED

Education is the key to the future. Muzoon Almellehan has known this since she was 14 years old. But she lives in a Jordanian refugee camp. And since then she has been fighting ... END_OF_DOCUMENT_TOKEN_TO_BE_REPLACED

The Kurdish YPG militia did the heavy lifting in the fight against the "Islamic State", yet many foreign YPG adherents, including Germans, have come home to find themselves under ... END_OF_DOCUMENT_TOKEN_TO_BE_REPLACED

The terror attacks in Paris, Brussels and Berlin were all carried out by men radicalised in jail. In Germany, politics and the judiciary are trying out new approaches to prevent ... END_OF_DOCUMENT_TOKEN_TO_BE_REPLACED
Author:
Andreas Kilb
Date:
Mail:
Send via mail

END_OF_DOCUMENT_TOKEN_TO_BE_REPLACED
Social media
and networks
Subscribe to our
newsletter