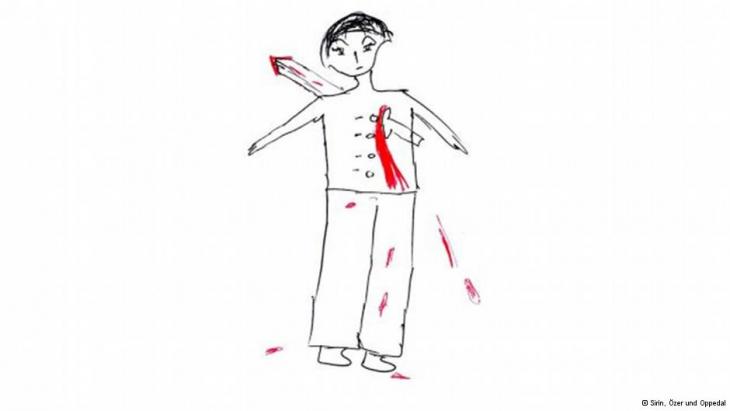 The Emotional Scars of the Refugee Children

The war in Syria has traumatized children as well as adults. Their nightmares and drawings are blood red. In Turkey, one center is providing a sense of stability for refugees of all ages - paintbrush included. Monika Griebeler reports from Antakya

"When an airplane flies overhead, it scares my son. When he sees rubble on TV, he cries and clutches at his mother. He cries often."

As he speaks, tears rim Mohamad's own eyes. Eight months ago, the 47-year-old engineer and his family fled Syria's civil war. He can hardly put into words the atrocities they experienced there. They're simply too brutal - even for a man as weathered as himself.

Nearly two million people have fled to foreign countries as a result of the Syrian civil war, according to United Nations refugee agency UNHCR. More than half are children.

And yet while they might be fleeing from the war, the refugees don't appear to be escaping it. 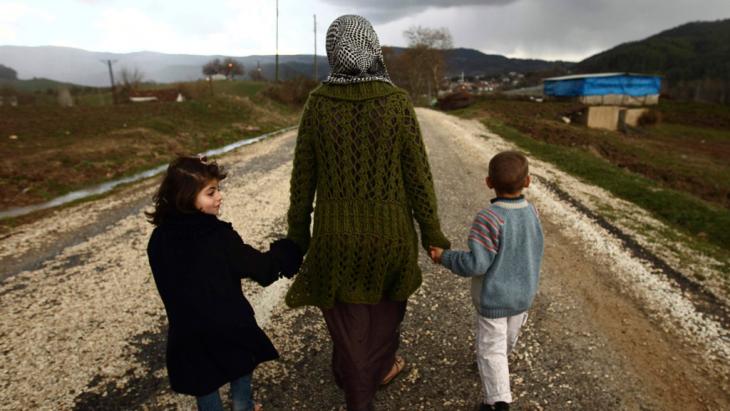 Whoever visits a school for Syrian refugee children will be confronted with drawings of death and desolation: women who cry for their husbands, tanks and army helicopters gunning down small, helpless human beings. There are huge piles of drawings, with black and blood red the dominating colors.

In 2012, researchers from Turkey, the US and Norway asked children in refugee camps to draw a person. Some added blood, tears or weapons to those drawings of their own accord.

"[Syrian children] are growing up with feelings of mistrust, betrayal and anger," wrote the authors of the study, Serap Özer and Selcuk Sirin, in the New York Times.

But at an educational meeting center in Kirikhan, just over the Turkish border, not a trace of blood or tears is to be found. The town of Kirikhan is just 100 kilometers west of Aleppo, Syria. At the BZZ Kirikhan center, which is run primarily by the Turkish branch of a German nonprofit, the Deutschen Volkshochschulverbandes (DVV International), drawings in the hallway made by children show women in head scarves, men wearing ties, many of them smiling and all colorfully framed.

Mohamed's children are attending painting classes here. The bright paints are splashed not only onto paper, but also onto the wall outside the building - and sometimes onto the children's faces, like the two painted hearts on the cheeks of a little girl. Across the forehead, nose and mouth of another boy is a painted Syrian flag. 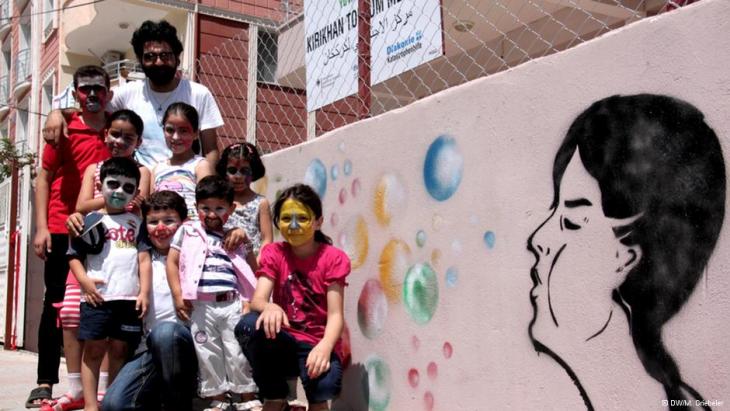 Collective creativity against the traumas of war: Simply being together helps children at the Kirikhan center to heal

Petek Akman is responsible for psychological care at BBZ Kirikhan. Before joining the newly-opened center, she'd worked for six years with the Turkish Red Crescent humanitarian organization, at times in refugee camps. Events such as war are highly traumatic, she says, above all else, when children lose their feeling of security.

"They hear bombs, see how their house is destroyed, and how people die," she told DW. "And often they end up saying, 'My parents can't protect me, either.'"

"But," Akman adds, "children are resilient. They're often tougher than adults."

Since they are not as fully conscious of the consequences of war, she says, they can return more easily to a sense of normality. "Children are open to change."

Of particular importance is strong, familial support. That's also why the BBZ center is in fact aimed more at adults than children.

Professional development courses and language classes are available, and, on a weekly basis, Mohamad stops in to learn Turkish and English. Additionally there are the soccer tournaments, theater classes or communal tea sessions people can attend. One floor above, meanwhile, children romp about the floor on colorful mats.

A place to be

"People can learn things here that might help them in the future. And they can forget a large part of what they've experienced," said Erdem Vardar, a representative of the German DVV International in Turkey.

More than 200 people have registered for courses at the Kirikhan center, which only opened in mid-August. Through the end of 2013, the center will be financed by the German ministry of development and the humanitarian network of the German protestant church, Diakonie Katastrophenhilfe.

"Education and psychological care take much longer than four or fives months to make an impact," Vardar said. And while many humanitarian organizations in the vicinity provide food, medicines or shelter, "People also need a place where they can wander in and talk to each other," he said.

A place to be, even if far from home. Resolutely, Mohamad wipes away his tears. "I've learned how to calm my son and daughters by hugging them regularly and staying calm, myself," he says, and smiles.

"Some of my neighbors collapsed," he said. "Their kids went hysterical out of pure fear."

But Mohamad wants to be strong. For his son, his daughters - and also for himself.

Home
Print
Newsletter
More on this topic
Camps for Syrian Refugees in Zaatari and Atma: Cut off from the Rest of the WorldSyrian Refugees in Lebanon: Fighting for SurvivalThe Domiz Refugee Camp in North Iraq: The Agony of the Syrian RefugeesQantara Dossier: Human Rights in the Muslim World
Related Topics
Arab Spring, Arabellion, Assad regime, Human rights, Policy on refugees and migration, Syrian Civil War
All Topics

International relations are shifting across the Middle East as regional powers adapt to America's retrenchment and China's growing influence. Although the region could become the ... END_OF_DOCUMENT_TOKEN_TO_BE_REPLACED

No other Western poet was arguably so well-versed in the Koran or so fascinated by Islam as Germany's national hero, Goethe. In a new publication that examines all Goethe's ... END_OF_DOCUMENT_TOKEN_TO_BE_REPLACED

"The people aren’t ready for democracy" has been the constitutional basis for Arab tyranny, its favourite slogan and its sacred narrative for more than a century. Yet, asks Khaled ... END_OF_DOCUMENT_TOKEN_TO_BE_REPLACED

A new global database shows a significant gap in reported COVID-related deaths, suggesting the actual worldwide death toll is short by at least 1 million. That's due in part to ... END_OF_DOCUMENT_TOKEN_TO_BE_REPLACED

Two decades after the attacks of 11 September 2001, the West faces the shattered debris of its failure – not only in Afghanistan, but also in Iraq, Syria, Libya and Yemen. What ... END_OF_DOCUMENT_TOKEN_TO_BE_REPLACED

Caught up in discussions on the future of local Afghan forces and new Islamist threats, people are failing to grasp the historic scale of the debacle, argues Stefan Buchen in his ... END_OF_DOCUMENT_TOKEN_TO_BE_REPLACED
Author:
Monika Griebeler
Date:
Mail:
Send via mail

END_OF_DOCUMENT_TOKEN_TO_BE_REPLACED
Social media
and networks
Subscribe to our
newsletter