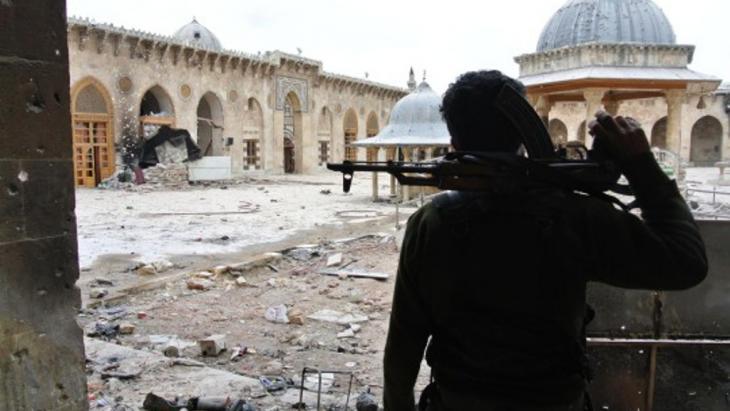 It is now plain for all to see that the destruction of Syria's cultural heritage is far worse than anyone expected. Michel al-Maqdissi, director of the Archaeological Excavations Department at the Syrian Directorate General of Antiquities and Museums from 2000 to 2012, tells Mona Sarkis how dire things really are and of the mistakes made by UNESCO

Mr al-Maqdissi, you were involved in the excavations at Qatna-Mishirfeh, where a fully intact 3,500-year-old tomb was discovered in 2002. So my first question to you is this: has Qatna also been looted?

Michel al-Maqdissi: To my knowledge, no. The site is too famous; people would know. Moreover, in contrast to other sites, Qatna-Mishirfeh is still being guarded. 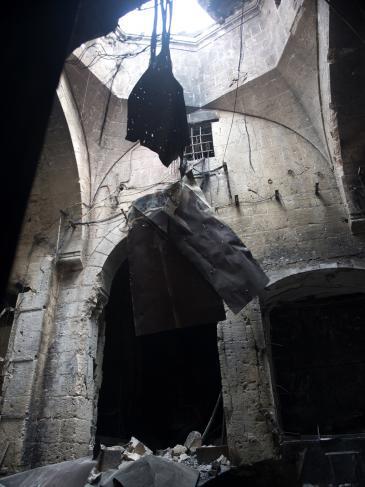 Damage to the bazaar in the Syrian city of Aleppo: "The Syrian Army has destroyed a lot with its incessant bombing. The results can be seen in Aleppo, Bosra, the crusader castle Crac des Chevaliers or the columns in Palmyra," says Michel al-Maqdissi

Which cultural sites have been most affected by looting or fighting?

Maqdissi: The Syrian Army has destroyed a lot with its incessant bombing. The results can be seen in Aleppo, Bosra, the crusader castle Crac des Chevaliers or the columns in Palmyra. In some places, such as the old town in Homs, virtually nothing is left.

As for looting, it seems that so far, nothing can surpass Apamea. The ancient site of the Seleucids on the Orontes today consists of 4,000 craters. Some are three metres deep; some are even deeper. The brutal and systematic methods the looters used is clearly illustrated by satellite images from April 2012. They must have used drills.

Dura Europos and Ebla-Tell Mardikh have also been severely affected. Since the former is in the north-west and the latter in the south-east of Syria, one has to assume that the whole country is being looted. It is mainly gangs who are responsible for this: they gathered sufficient experience in Iraq and are now supplying an international antiquities mafia.

So the artefacts are not being stolen by rebel groups in order to buy weapons?

Maqdissi: I think that the majority of looters are professionals. You must remember that the antiques trade is not a quick business; the rebels hardly have the time to wait for their share of the revenues. What's more, armed groups – some of them are certainly not rebels, but real terrorists, such as the Islamic State in Iraq and the Levant (ISIS) or Jabhet al-Nusra – control the oil fields in northern Syria. For them, this is financially much more effective than the antiques trade.

In addition, they regard the artefacts as blasphemous idols. ISIS, for example, recently smashed a one-and-a-half-metre high, approximately 3,000-year-old Assyrian statue from the site Tell Ajaja in north-east Syria on camera.

In June 2013, UNESCO put all six World Heritage sites on the list of endangered monuments. You see this as nothing more than a gesture and one that came far too late at that. Why are you so critical of UNESCO?

Maqdissi: Because it is a tired institution that operates in a framework that is far too narrow. This starts with their experts, who have remained unchanged for decades and apply the same procedures from Iraq to Afghanistan. But the cases vary from country to country and require more than just the same old pattern. In the case of Syria, UNESCO became active much too late. After all, Aleppo, Homs, Crac de Chevaliers, or Palmyra were not only "threatened" in June 2013, they were already badly damaged.

Currently, UNESCO is planning to train customs officers in some of the neighbouring countries. Again, this comes too late: Turkey in particular has for years been playing a major role as a transit country for stolen artefacts from Syria, and everyone knows it. In other words, UNESCO is taking action in places where it doesn't help anyone anymore.

On the other hand, there are, for example, many activists in Aleppo who are trying to protect the cultural sites and museums. Some of them have been carrying objects from the very important manuscript library from one place to the other for months. But they are helpless; they lack the know-how and don't have adequate equipment. Why doesn't UNESCO finally get around to training these activists as it does the staff of the General Directorate of Antiquities and Museums? That would actually help Syria's heritage.

But UNESCO is made up of 195 member states, including Syria. This means that their official co-operation partner is the Syrian regime, not the activists. At its meeting in Paris in May, however, UNESCO brought together representatives of the Syrian regime and non-governmental organisations (NGOs) with access to rebel-held areas in order to improve the communication of the two parties. Do you also see this as just a gesture?

Maqdissi: UNESCO has often made fundamental errors. So with every crisis, it has ruined the effectiveness of its actions and the confidence in its role as defender of cultural heritage. Unfortunately, it becomes ineffective, is always late, is blocked by its own experts and increasingly burdened by the weight of its own bureaucracy. As for the recent attempt to improve the "communication between rebels and regime", I think that this is an action that does not seriously expand the traditional list of UNESCO measures. Instead, it is very much in line with its image as a mere "debating club" that many critics accuse UNESCO of being.

A major problem in Syria is that the majority of those people guarding the archaeological sites are no longer getting paid. Here too, you accuse UNESCO of inaction.

Maqdissi: It could at least have tried to think about relief efforts. Traditionally, the guards are paid by the Syrian government and by foreign archaeological missions, which usually brought the money into the country themselves.

For more than three years now, foreigners have stayed away. I have tried to help by picking up the money personally at foreign institutions and sending it from Lebanon to trustworthy Syrians, who gave it to the Directorate of Antiquities so that the guards' wages can be paid for another year. But that only helped a small number of the guards. According to my estimates, 30 to 40 per cent of them no longer receive any money. The sites of the ancient trading city of Mari-Tell Hariri, for example, are currently being guarded by overburdened villagers. 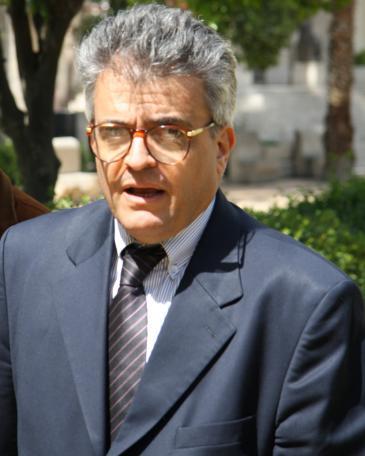 Michel al-Maqdissi was involved in the excavations in Qatna-Mishirfeh that led to the sensational discovery of a Bronze Age tomb in 2002. Today, he works as a researcher at the Department of Oriental Antiquities in the Louvre in Paris

Many NGOs have been formed inside and outside of Syria. Some of them are already discussing the reconstruction of the destroyed cultural monuments. Do you think this is useful?

Maqdissi: Syria has been experiencing a dramatic brain drain in the past three years. Many experts will not return. For the regime, this is quite beneficial, because then almost nobody will criticise its machinations. I'm thinking of such monstrous projects as the long-planned construction of a tourist area in the midst of the Phoenician site of Amrit on the Mediterranean. We are speaking of a space measuring nearly 40,000 square metres with a 4-star hotel, restaurants, night club, golf club, beach club, apartment hotels, etc.

I mention this to illustrate that there are – and will continue to be – other threats to Syria's heritage. For now, there is of course a war with an unpredictable end. At the same time, however, it takes 10 to 15 years for a new generation of experts to be adequately trained for all the restoration work that is waiting at the end of the day. After all, UNESCO is right about one thing: the scale of the devastation in Syria can't be compared with anything seen before. So, a lot of good experts will be required.

German Middle East analyst Guido Steinberg and television journalist Ulrich Tilgner have both published new books on the conflicts in the Middle East. Their analyses and their ... END_OF_DOCUMENT_TOKEN_TO_BE_REPLACED

The Pope’s journey to the "land between the rivers": places of terror and a dialogue to promote hope and optimism. His meeting with Shia Grand Ayatollah Ali al-Sistani was a ... END_OF_DOCUMENT_TOKEN_TO_BE_REPLACED

When Pope Francis sets foot in Iraq, he will be breaking historic ground while manoeuvring religious and political minefields. So will his foremost religious counterpart, Grand ... END_OF_DOCUMENT_TOKEN_TO_BE_REPLACED

Iraq's Christian minority has dealt with decades of persecution – and many are sceptical about whether a four-day visit by Pope Francis will make a difference. By Cathrin Schaer ... END_OF_DOCUMENT_TOKEN_TO_BE_REPLACED

For years the Arab intellectual elite looked to Lebanon, coveting its atmosphere of freedom. Feigning the non-existence of repression, Beirut welcomed intellectuals from across ... END_OF_DOCUMENT_TOKEN_TO_BE_REPLACED
Author:
Mona Sarkis
Date:
Mail:
Send via mail

END_OF_DOCUMENT_TOKEN_TO_BE_REPLACED
Social media
and networks
Subscribe to our
newsletter