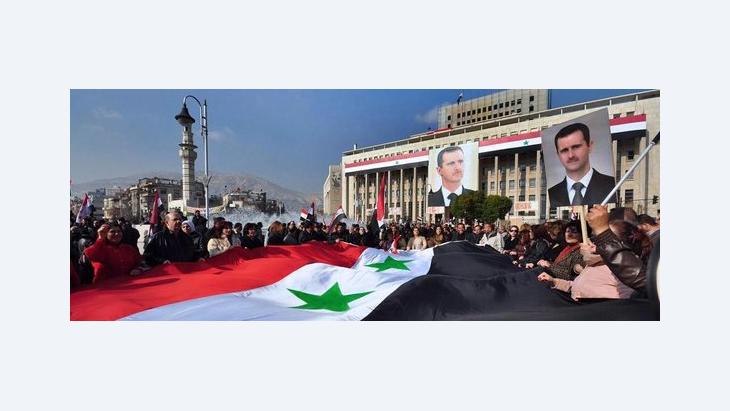 Syria's Minorities and the Uprising against the Regime

﻿Who wants to topple Assad? Syria's confessional minorities are nervous about what might follow a regime change. But like the country's majority Sunni Muslim community, they are also divided along political lines. Hubertus Ecker assesses the current mood in Syria

Late December last year saw the publication of an online poll conducted by the British market research organization YouGov of 220,000 Arab-language Internet users on the popularity of Syrian President Bashar al-Assad. The result: 55 percent of Syrians polled do not want to see him stand down.

This is surprising – particularly in view of the fact that the study was commissioned by what are known as the "Doha Debates", a "Qatar Foundation" initiative. This foundation is run by the Qatari dynasty, which is currently not one of Syria's greatest fans.

"If even Qatar is admitting to this percentage, the true figure is probably much higher," says Hussein R. The 37-year-old makes no secret of his loyalty to the regime. The car mechanic lives with his wife and daughter in Latakiyah, and every weekend the family visits his mother, who like his other nine siblings, lives in a small village in the Alawite Mountains. 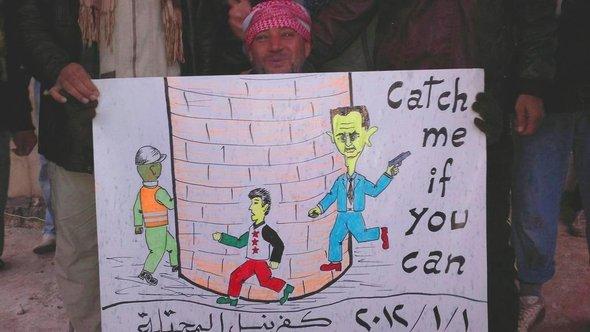 Syria's President plays cat-and-mouse with representatives of the rebels and the Arab League, which has so far failed to put an end to the violence. Attacks on civilians continue unabated, and there are increasing calls within the Arab League for international intervention to stop the bloodshed

​​However, one member of the family has been missing since September. Rosa, the 27-year-old sister, is being held at the women's prison in Adra near Damascus, after organizing protests in the suburbs of the capital. Her family only found out once she'd been arrested, and Hussein disassociated himself from her on behalf of everyone else.

On the Facebook page that Rosa's friends set up for her titled "Freedom for activist Rosa R.", he wrote: "We'll never forgive you for what you've done to your family!"

As far as Hussein is concerned, "family" also means the Alawite confessional minority that has suffered repression many times in the past and which, he says, never had it as good as under the Assads.

What he doesn't suspect is that his youngest brother Basel is following in Rosa's footsteps after hearing about the torture she is being subjected to in prison. "We Alawites are doing so well here we're not even allowed to love our own sister," says the 20-year-old bitterly.

Druze Muslims allied with the Alawites

Lubna has also fallen out with her family. Her father beat her to force her to return to Sueida. He never liked the fact that the 32-year-old had been living alone in Damascus since 2008, although her job as a ministry official took the pressure off him financially. But when he found out that she had been meeting human rights activists, he put a swift end to Lubna's "Damascene Spring". 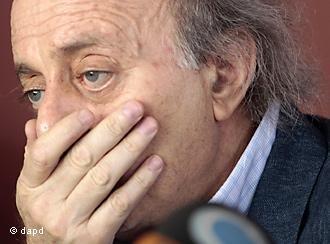 ​​"He didn't want me to make any trouble, he just wants me to get married and vegetate for the rest of my life in the Druze Mountains," she says, full of hatred.

This is in effect what she's been doing for the last eight months, under the watchful eye of her family. She describes Sueida and other Druze settlements as true "Assad fortresses", and says that the people sense a certain solidarity with the Alawite community, as both sects are not accepted by the majority Sunni community. "So most people behave as though the dictatorship were a wonderful thing," she adds.

The regime is now turning this support to military advantage – especially in view of the fact that the Druze community traditionally represents a robust community capable of defending itself. "Young men from poor families are being paid to take part in the bloody crackdown on the protests," says Lubna. She goes on to say that few have heeded an appeal by Lebanese Druze leader Walid Jumblatt to the Syrian Druze community not to take up arms against their fellow citizens.

"There are no dead at all"

Meanwhile Thérèse, a 56-year-old businessman's wife, is sending out email circulars containing an appeal for donations by the well-known Abbess Agnes-Mariam de la Croix from the Carmelite convent in Qara – for the victims of "terrorist groups attacking the civilian population in a bid to destabilize Syria." The words in this appeal are unambiguous.

The Abbess, however, did write a much more critical letter to President Assad in which she declares her dismay at the findings of Amnesty International in mid-November and requested that he make it possible for the International Red Cross to visit hospitals in prisons. But Thérèse did not disseminate that particular letter.

A woman with a burning interest in psychoanalysis who debates the writings of Sigmund Freud and Jacques Lacan with her friends, if something jars with the truth as it is being presented by the regime, she simply whitewashes it. Why, she asks, are there always "photographers" on hand whenever there are dead bodies? Because there are no dead bodies, everything is faked!

Discord also within the Sunni community

Fears among Syria's minorities over what might follow a toppling of the regime are conspicuous. But at the same time, there is increasing evidence that the groups are split from within. 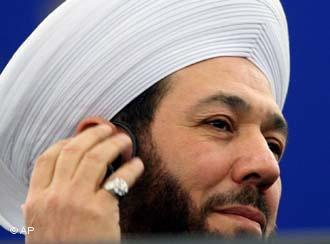 Radical ambassador for the Assad regime: Syria's Grand Mufti Ahmad Badr el-Din Hassoun had this message for the West last October – "I say to Europe and America we will mobilise our suicide bombers, who are already in your midst, if you bomb Syria or Lebanon"

​​Even the Sunni majority does not form a monolithic block. While the revolts were triggered and are being maintained by the rural population, the urban middle classes are keeping a low profile behind their clergy and adhering to the state-approved Islam as re Großmufti Ahmad Badr el-Din Hassun represented by Syria's Grand Mufti Ahmad Badr el-Din Hassun or presidential adviser Sheikh Ramadan al-Buti.

However, fissures are also in evidence here. For example, an anonymous group of women recently disassociated themselves from their religious community because it would not take a critical stand against the "criminal regime". The community concerned is the "Qubeissiat", the largest Islamic-conservative women's movement in the Middle East.

The group is named after Munira al-Qubaysi, a female sheikh and Islamic scholar born in 1933, currently living in Damascus. Since the 1960s, her work has been supported by the conformist Syrian clergy and thereby gained immense influence: Increasing numbers of women, many of them from the upper social stratum, joined her movement and opened their own nurseries and schools to promote al-Qubaysi's apolitical, quasi-Sufi reading of Islam.

There was appropriate astonishment when a number of women broke rank with her strictly hierarchical organisation. But does this show the noticeably greater divisions within certain social classes that are, furthermore, economically bound up with the regime?

So it would appear that the survey results published by Qatar are not erroneous – evidently to the displeasure of the Emirate itself, which tried to play down the statistic and highlight the results of the same poll conducted in Syria's neighbouring states and the Gulf region as a whole. These show that 81 percent of all non-Syrians are in favour of an end to the Assad regime.

The fact that 55 percent of Syrians are against it was reduced to foot-note status at the Doha presentation. But surely, this is about what they want. Theoretically, in any case.

The disappearance of Razan Zeitouneh and her colleagues has been one of the greatest mysteries of the Syrian war – until today. DW's investigative unit hunted clues across six ... END_OF_DOCUMENT_TOKEN_TO_BE_REPLACED

How can the various realities of Kurdish life, shaped by depression, resistance and war, be depicted in art? This is the question addressed by the “bê welat – the unexpected ... END_OF_DOCUMENT_TOKEN_TO_BE_REPLACED

Millions of people in Syria's Idlib region depend on foreign aid that passes through only one border crossing. The UN mandate regulating passage through it will expire on 10 July ... END_OF_DOCUMENT_TOKEN_TO_BE_REPLACED

They’ve already got the Louvre; they’ll soon have a Guggenheim Museum as well – and now the Emirates have added literature to their quest for cultural supremacy in the Arab world ... END_OF_DOCUMENT_TOKEN_TO_BE_REPLACED

By stage-managing his re-election in a poll widely dismissed as a farce, Syria's President Bashar al-Assad has killed two birds with one stone: he has forced his compatriots to ... END_OF_DOCUMENT_TOKEN_TO_BE_REPLACED

END_OF_DOCUMENT_TOKEN_TO_BE_REPLACED
Social media
and networks
Subscribe to our
newsletter