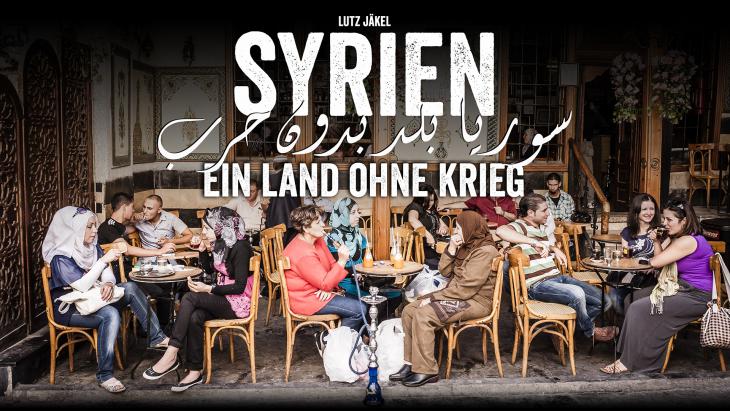 "Syrien – ein Land ohne Krieg"
Syria, as it once was

Many people now only associate Syria with war. In an attempt to counteract these associations, photographer Lutz Jakel and journalist Lamya Kaddor have put together a book of photography from pre-war Syria. By Marian Brehmer

The Syria that existed before 2011 seems almost like a distant dream. Anyone who didnʹt visit pre-war Syria, never sampled Syrian hospitality or took a stroll through one of the venerable souks, will know nothing of this war-torn countryʹs soul, or of its culture. Many people only became conscious of Syriaʹs presence on the world map through the never-ending spiral of tragic news from the country.

When I tell people about my six-week trip to Syria in summer 2009, hardly anyone can believe that at one time I actually felt at ease there. I remember a right-leaning comment on Facebook last winter: the Syrians, a user claimed, should be glad they can practice their Islam here in our country; Christians in Syria canʹt even think about celebrating Christmas.

In the face of such widespread ignorance, last autumn Malik Verlag published a volume of photos called "Syrien - ein Land ohne Krieg" (Syria – a country without war), to close a gap that had long needed filling. The book promises "personal insights into an unscathed country" and shows todayʹs readers that there was and is a Syria before and beyond the war.

The idea for the book came out of the picture archive of German photographer and Islamic studies scholar Lutz Jakel, who travelled to Damascus for the first time in 1993 to road-test his Arabic. Syria, as he realised over the course of many visits, was for him "the most exciting and interesting country in the Arab world, and the richest in human kindness." 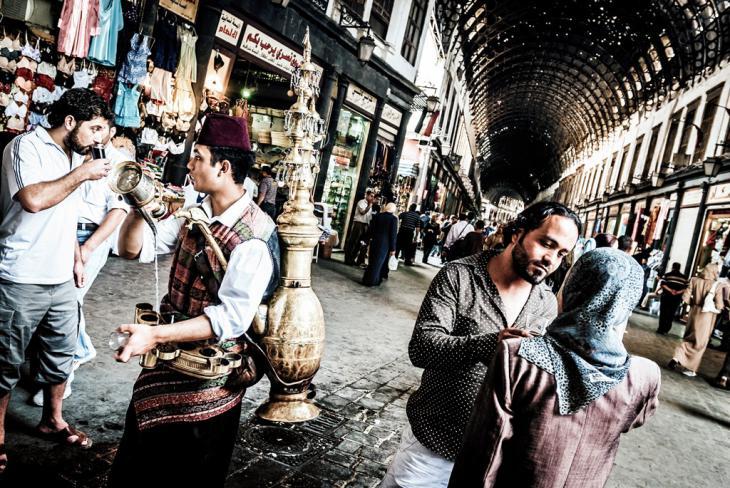 An air of exuberance and zest for life: the book of photographs includes shots of a tamarind juice vendor in Ottoman costume, among the shoppers in a Damascus bazaar; Syrian Christians chopping vegetables, or casually-dressed young people flirting with each other

Lamya Kaddor, a journalist and teacher of Islamic religious education, is the editor of "Syria – a country without war". In the foreword, she recalls summer holidays to the village her family came from on the Syrian-Turkish border, with days spent among olive and fig trees. Members of her family have died, too, and now images of misery from the civil war have joined those childhood memories.

A note of nostalgia

And so there is always a note of nostalgia in the texts by the various authors whom Jakel and Kaddor were able to recruit for their project. German-Syrians, or Germans who travelled regularly to Syria for work before the war, speak of a Syria that no longer exists.

Jakelʹs photos, some colour, some black and white, show the best of everyday life in Syria, often with an air of exuberance and zest for life: a tamarind juice vendor in Ottoman costume, among the shoppers in a Damascus bazaar; Syrian Christians chopping vegetables, or casually-dressed young people flirting with each other.

Again and again the photos, accompanied by short reminiscences, take the reader to places that function as symbols for Syrian culture. Lutz Jakel, for instance, tells of the military-grade scrubbing treatment in Syriaʹs hammams, while the former Syria correspondent Kirstin Helberg sings the praises of the juice stall in her Damascus neighbourhood, the owner of which lovingly polished the melons on his display every day.

Other texts strike a less pleasurable tone, as they also recall everyday life under the Assad regime, and the icy presence of the secret service in Syrian society. Helberg sketches out the history of Aleppoʹs traditional olive soap and describes how in Lebanon, Syrian refugees were asked by European aid workers if they knew how to use a bar of soap – when it had been a feature of Syrian life for 1200 years.

Of course, it wasnʹt possible to banish the war from the book entirely. The photos of Aleppoʹs dreamily beautiful Old Town are a painful reminder that today, it has been reduced to a pile of rubble.

The book also contains a portrait of Paolo dallʹOglio, the Italian Jesuit who built up a centre for inter-faith dialogue in the ancient monastery of Mar Musa in the Syrian desert and who was abducted by Islamists in Raqqa in 2013. It is uncertain whether dallʹOglio is still alive.

Hope of better times to come?

The presence of hundreds of thousands of Syrian refugees in Germany means that the countryʹs fate is irrevocably bound up with that of the Syrian people. All the more important, then, are the photos in the book that illustrate Christian life in Syria. Much of what Jakel shows is less foreign to us than many Germans might imagine. Or, as a Syrian saying goes: "Every person has two homelands. His own and Syria."

One scene, for instance, shows similar-looking Christian and Islamic amulets on sale in a souvenir shop in Damascus. Just as the amulets dangle side by side from the stands, the inter-faith life of Syrians has for centuries been characterised by respect and harmony. Doesnʹt this long history of peaceful co-existence give us hope that better times will one day return?

Lamya Kaddor, in any case, describes her reaction to seeing Jakelʹs Syria pictures as follows: "Suddenly I saw the past in the present and knew that this will be the future of this country, too. Syria is not dead." The conviction that Syria will survive speaks from every page of the book. It is tempting to believe – indeed, we should believe – that the authors are right.

A French artist has used photos of torture from Abu Ghraib for an oversized artwork at the Berlin Biennale. Reactions from fellow artists have been mixed, with some criticising ... END_OF_DOCUMENT_TOKEN_TO_BE_REPLACED

Since Ali Khamenei, Iran's most powerful man, has openly and unconditionally come out in support of Putin's war in Ukraine, logistical help is on its way, with an allegedly ... END_OF_DOCUMENT_TOKEN_TO_BE_REPLACED

It is possible to write about the Holocaust and the crimes of colonial powers without downplaying anything. In her latest book, Charlotte Wiedemann focuses on the numerous blind ... END_OF_DOCUMENT_TOKEN_TO_BE_REPLACED

This year Annemarie Schimmel, the great German scholar of Islamic studies, would have turned 100. Unique within the German and international academic community of her time, ... END_OF_DOCUMENT_TOKEN_TO_BE_REPLACED

The highly controversial Indian blockbuster "The Kashmir Files“, on the exodus of Kashmiri Hindus in the 1990s, is characterised by unilateral representations, negative ... END_OF_DOCUMENT_TOKEN_TO_BE_REPLACED

END_OF_DOCUMENT_TOKEN_TO_BE_REPLACED
Social media
and networks
Subscribe to our
newsletter