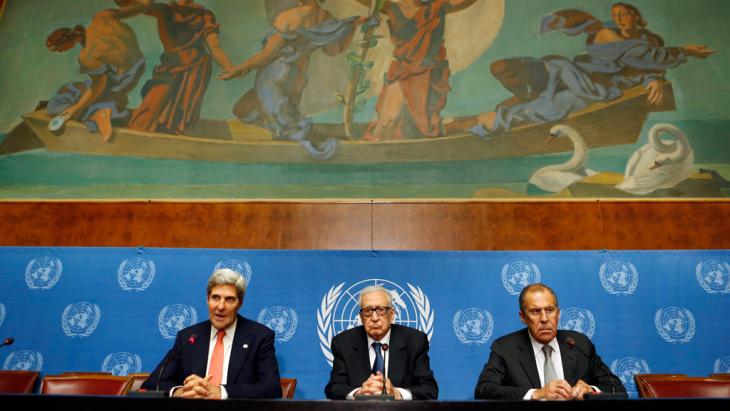 In Geneva, the US and Russian foreign ministers announced their agreement on a plan for the destruction of Syrian chemical weapons – but is it a breakthrough for a political solution? Or is the agreement itself merely a manoeuvre to help Russia and the USA save face? Answers from Andreas Zumach

The truth is probably somewhere between the two poles. One thing is that the Russian government has helped the Obama administration out of the dead end into which it had manoeuvred itself through its escalating threats of military intervention over the past weeks. In addition to the majority of Americans rejecting military intervention, the US President was facing a painful defeat in Congress.

On the other side of the equation, however, the plan agreed in Geneva means Russia is now obliged – for the first time since the beginning of the Syrian conflict – to exert at least political pressure on Damascus.

Following a blockade in the UN Security Council over more than two years, the agreement between Moscow and Washington became possible due to growing concern on both sides about a worst-case scenario, in which Syria collapses and more and more parts of the country fall under the control of Islamist militia with links to al-Qaida, which could even gain access to the chemical weapons in the country. This scenario is a threat to the direct and indirect interests of the USA and Russia in Syria, and the region as a whole. 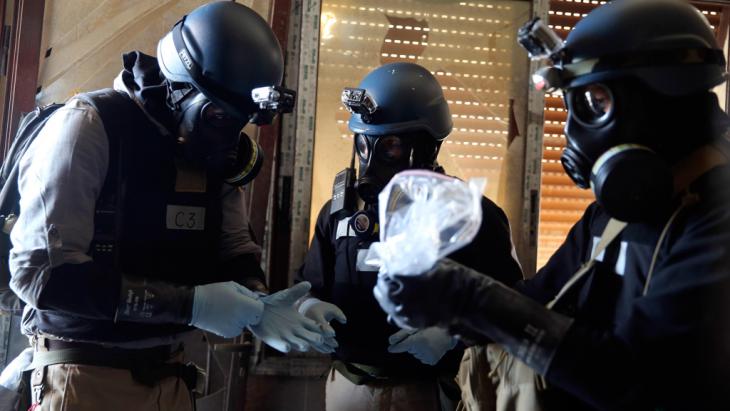 Speedy consequences demanded: The UN chemical weapons inspectors found "clear and convincing" evidence of an attack using Sarin nerve gas in Syria. They found the poisonous gas was shot from surface-to-surface rockets near Damascus on 21 August and caused "numerous casualties, particularly among civilians"

Despite all the continuing discord between Russia and the USA, it is in both countries' interests to prevent such a thing from happening.

The first step would be international control and subsequent removal of Syria's chemical weapons. Only if this succeeds would there be any chance that the USA, Russia and the regional players indirectly involved in the Syria conflict – Saudi Arabia, Qatar, Iran and Turkey – might jointly put an end to the bloodshed with conventional weapons and negotiate a political solution resulting in free elections in Syria, monitored by the UN.

As a result of these elections at the latest, the Assad regime would most likely be consigned to history; one way for Moscow to abandon a longstanding ally without losing face.

Implementing the Russian-American plan – beginning with the Assad government disclosing the entire Syrian C-weapons programme this Saturday (21 September) up to the removal or destruction of all existing weapons and production facilities by mid-2014 – is of course rife with technical and political risks. Particularly for the Assad government, but also for the rebels.

At the moment, however, it looks as if the plan might fall at the first hurdle, the UN Security Council. According to the framework drawn up between Foreign Ministers Kerry and Lavrov, the council has to render the accord binding under international law through a resolution passed this week, at the same time commissioning the Organisation for the Prohibition of Chemical Weapons (OPCW) in The Hague with putting it into practice.

Yet the US, France and Britain want this initial resolution to include a threat of military steps against Syria – in contravention of the wording of the Kerry-Lavrov agreement. The framework states that the Security Council should only "impose measures under Chapter VII of the UN Charter" via a further resolution "in the event of non-compliance" by the Syrian government to its resolution to implement the control and destruction of its chemical arsenal. 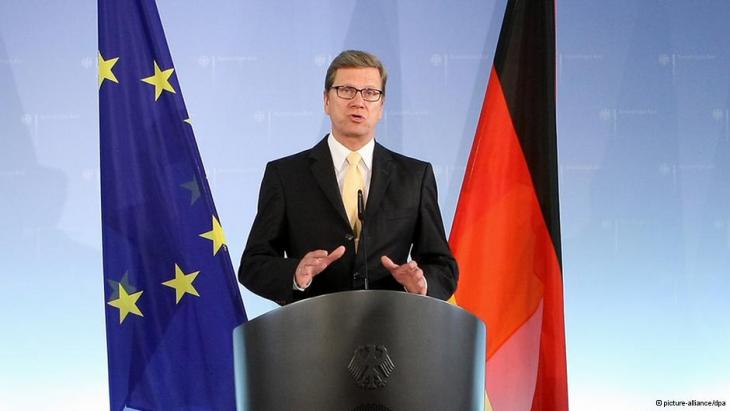 In agreement with the USA, France and Britain: German Foreign Minister Guido Westerwelle holds the Syrian government under President Bashar al-Assad responsible for the use of chemical weapons in Damascus. "The evidence indicates that the Assad regime is behind this breach of taboo," Westerwelle stated

There has not yet been any "non-compliance" by the Assad government. Failure to comply can only be established after Saturday at the earliest, if the Syrian government does not fully disclose its chemical weapons programme to the OPCW at that point. Or if the data provided by Damascus differs significantly from the American and Russian intelligence on Syria's C-weapons.

Should the Security Council fail to pass a resolution making the Russian-American de-armament plan for Syria's chemical arsenal binding under international law for Damascus, due to the three Western veto powers demanding a military threat before the weekend, Assad will probably take it as a pretext not to disclose Syria's chemical arsenal. That would then constitute "non-compliance" on the part of the Syrian government.

International Criminal Court to be brought in?

Might this be a deliberate strategy? Recent statements, particularly from several French politicians who are especially insistent on exerting military pressure on Syria, at least corroborate this suspicion. Another less than helpful position at the moment is German Foreign Minister Guido Westerwelle's call for the International Criminal Court (ICC) to open proceedings against Assad. 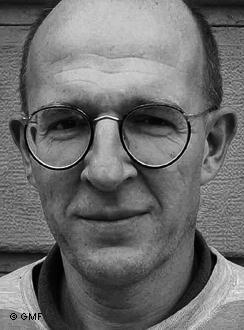 Andreas Zumach, born 1954, is a UN correspondent in Geneva. He is a trained economist, journalist and social worker. His most recent book "Die kommenden Kriege" (The Coming Wars) is published by Kiepenheuer & Witsch.

In its essence, this demand is entirely correct. Yet not only Assad and other members of the regime must be brought before the ICC for their crimes against humanity and war crimes, but also members of the rebel groups, which the UN Human Rights Council (UNHCR) Investigation Committee accuses in its most recent report of having carried out similar crimes – albeit to a lesser extent to date than the government troops.

In two to three years at the latest, we can also expect the UN Security Council, with Russia's agreement or at least abstention, to issue the ICC with a mandate to try Syrian citizens (which would be necessary, as Syria has not yet affiliated to the ICC).

For the time being, however, Assad appears to be an essential player – initially for implementing the plan for removing all chemical weapons in Syria and probably also as a negotiating partner for the planned second Syria conference in Geneva. And perhaps even later as a member of a transitional government up to the elections, to be monitored by the United Nations.

Understandably, that is an unbearable idea for the victims of the Assad regime. But anyone who wants to put an end to the murderous war in Syria and bring about a political solution will have to take the rough with the smooth.

Home
Print
Newsletter
More on this topic
Europe's Syria Policy: Union of the UnwillingCivil War in Syria: The Time to Act is NowInterview with Sadiqu Al-Mousllie: "The Murderous Assad Regime Must Be Stopped"
Related Topics
Syrian Civil War, Syrian opposition, Arab Spring, Assad regime, Islam and the West, U.S. policy in the Middle East
All Topics

Dalia Hatuqa is an experienced journalist who has reported on the Israeli-Palestinian conflict from Ramallah, Washington DC and Amman. A writer for Time Magazine, Foreign Affairs ... END_OF_DOCUMENT_TOKEN_TO_BE_REPLACED

Since President Abdul Fattah al-Sisi seized power in Egypt in 2013, he has ruled the country with an iron fist. Civil society, opposition and free press struggle to survive. Tens ... END_OF_DOCUMENT_TOKEN_TO_BE_REPLACED

Very different Western reactions to the suffering in Ukraine and the Arab world show that there is a profound rift among cultures. Essay by Michael Young END_OF_DOCUMENT_TOKEN_TO_BE_REPLACED

Many Turks are dissatisfied with the international status of their country. At the same time, opinion polls reveal great scepticism among the Turkish population towards the USA. ... END_OF_DOCUMENT_TOKEN_TO_BE_REPLACED

Since Spain abandoned its traditional neutrality towards the conflict in Western Sahara, Morocco has announced a "new phase" in relations between the two countries. But what is ... END_OF_DOCUMENT_TOKEN_TO_BE_REPLACED

Tunisia's president has been carrying out a coup by degrees, demolishing the country's hard-fought democratic gains bit by bit. With an economy in turmoil and a splintered ... END_OF_DOCUMENT_TOKEN_TO_BE_REPLACED
Author:
Andreas Zumach
Date:
Mail:
Send via mail

END_OF_DOCUMENT_TOKEN_TO_BE_REPLACED
Social media
and networks
Subscribe to our
newsletter