"The Fruits of Anger"

Moroccan-French author and intellectual Tahar Ben Jelloun depicts "The Fruits of Anger". According to Georg Patzer, his novel is an enraged, escalating, often politically incendiary monologue about migrant life in France 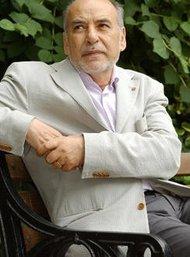 Tahar Ben Jelloun has lived and worked in France since 1971. For his literary work, he was awarded, among others, the Prix Goncourt and the International IMPAC Literary Award

​​She is an outsider. She can do what she wants. For her mother, for her brother-in-law, Nadia is a renegade who has betrayed her people, her religion. She won't wear a headscarf, doesn't want to marry an Arab, and she is even studying at university. And for the French, she will always be an African, an Arab, someone from the suburbs.

But that's the way things are for so many people. Whole families are falling apart in this collision of cultures, people being crushed in the process. Nadia's sister is married off at sixteen, to Kader, a real picture-book Arab. He is proud of the bloodstained sheets after their wedding night: "She cried and complained that her belly hurt. She bled for a long time. The more blood he saw, the more satisfied Kader was with himself. He viewed it as proof of his manliness."

When Nadia is thirteen, the house the family has built with its own hands is taken away from them: "A white house with irregular walls, like the ones travel agencies tout on the Peloponnesus. A house with seventeen windows, two doors, a terrace, several verandas." The communist mayor who enforces its demolition once fought in Algeria against the FLN. This is what life in France is like for the Beurs, the "Arabs" who are lumped together under this slang term.

Father Bachir beats his five children, but the authorities forbid him to do so. He doesn't understand: "In his homeland, everyone did it." But it's prohibited in France. And now the children have no respect for him anymore and use drugs. The Gharib family has two sons; one did time in prison, the other worked for the Mafia.

But there are other destinies here as well: Nadia's cousin was a petty criminal, smoked hashish and then met up with another gang:

"Their business was spreading Islam in our suburb. Nourredine fell into their laps like a ripe apple. He grew a beard, wanted to enforce a new way of life at home: his mother and three sisters were to wear headscarves; everyone should say the five daily prayers together; and above all, no one should eat food purchased with the money earned by his father any longer, because he ran a bar serving alcohol."

Moroccan-French author Tahar Ben Jelloun tells many such small, everyday stories in his book "The Fruits of Anger." In a rushed account, breathlessly reeling off the details one after the other, he has Nadia depict all of the people around her, the conditions under which she lives, and the contortions she must go through in order to survive in a world that is doubly alien to her. She constantly comes up against walls, the traditional ones erected by her parents, the modern ones in her surroundings.

The people around her come to terms with this situation in many different ways: when Naima manages to make a career for herself in advertising, her father calls her a whore and declares her dead. When the father of Yamina, Kbira and Rosa takes them back to his hometown for the holidays, only to burn their passports and entrust them to the care of his brother, who beats them and locks them up, Kbira slits her wrists and bleeds to death.

These are the horrifying stories that unfold in this suburb, which Ben Jelloun dubs "Resteville" – utterly commonplace, horrible stories of prejudice and harsh disciplinary measures, of political incompetence and everyday inhumanity. Unfortunately, Tahar Ben Jelloun has not made a novel out of these stories but instead an enraged, escalating, helpless, often politically incendiary monologue that seems to serve the sole purpose of venting all the pent-up anger referred to in the title.

Tahar Ben Jelloun
The Barbarians Are Coming
Tahar Ben Jelloun, Moroccan author and intellectual, argues that Europe would benefit from the entry of the Maghreb states into the European Community

Tahar Ben Jelloun
Bridging the Gap
Tahar Ben Jelloun, the celebrated Moroccan writer, explains how the children of Europe are spoilt and that his native country has a truly valid reason to be counted as a European country. Prune Antoine met him in Paris

Habib Selmi
"Writing Is a Journey Using Language from Within"
Habib Selmi is one of the most important Tunisian authors writing in Arabic. In this elaborate interview with Samuel Shimon, Selmi talks about his relationship to his mother tongue, his dislike of French literature and the art of the novel

END_OF_DOCUMENT_TOKEN_TO_BE_REPLACED
Social media
and networks
Subscribe to our
newsletter