In "Yamma", Tahar Ben Jelloun accompanies his mother, who is suffering from Alzheimer's. Angela Schader took a critical look at the new novel of one of the most important literary voices in the Maghreb

​​Tahar Ben Jelloun's account of the sickness and death of his mother truly had everything required to appeal to a large readership. There is the universal underlying theme – the agonizing loss of a loved individual, whose presence in one's life had been taken for granted. Then there is the matter of conscience about one's behavior during the long and increasingly serious illness of a family member.

It is a journey through the labyrinth of dementia, where the patient, according to her own words "has not gone crazy, but has merely gone away" to encounter those long dead and visit the stages of her earlier life.

There is an intercultural dimension, as well. Ben Jelloun's mother is a devout Muslim without any formal education. The author repeatedly compares her fate to that of the over ninety-year-old, headstrong, and highly cultured mother of his Swiss friend. And, finally, the book bears the name of an author regarded by many as one of the most important literary voices in the Maghreb and who has also been considered as a candidate for the Nobel Prize for Literature.

Despite this, the work repeatedly provokes a quiet sense of unease stemming from a variety of reasons. One of the most difficult aspects of the book concerns the compatibility of characters with their language. In the numerous and long passages of direct speech ascribed to the mother, the reader, nonetheless, can frequently hear the voice of the author instead.

This is not due to any doubts as to the linguistic abilities of the illiterate characters, which would be an annoying and arrogant false conclusion, but rather because the pitch hardly changes, whether it is Keltoum, the mother's nurse, who comes from a simple background, or the elderly dame in Lausanne that is speaking. This monotone voice threatens to separate the reader from the characters as if it were a sheet of clear, yet thick and cool glass.

One could still come to terms with this defect, as there are still plenty of interesting and touching details behind the glass barrier. With powerful, yet unsentimental imagery, Ben Jelloun traces the tragic adolescence of Lalla Fatma, who was married three times before her twenty-fifth birthday.

Sidi Mohammed, handsome and as young as his wife, died of typhus before seeing his and Fatma's firstborn child. The second husband was advanced in years, and Fatma also had to take care of his bedridden first wife, who accepted her fate with noble resignation. After the death of the couple came a third suitor, Tahar, Ben Jelloun's future father. As soon as he got Fatma pregnant, he disowned his other childless wife. This rude beginning set the tone for the rest of the marriage. 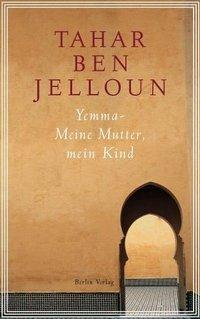 Cover of the German edition of "Yemma". The book has not yet been published in English

​​Although he was not particularly successful professionally, the family never lacked anything. Yet, Fatma found his refined irony profoundly strange. It bitterly consumed this innocent creature who constantly tried to preserve her dignity and not lose face.

As a young bride, Lalla Fatma had to prove to her husband's family her suitability for marriage by preparing a particularly complicated meal. As a housewife and mother, she would have to stand for days on end in the kitchen to cater for her guests, only to see the empty plates return while not having anything herself to eat except for the occasional piece of bread and a few olives.

Even approaching her own death she is still obsessed with proper decorum – she urges her son to redecorate the salon and not to be frugal for the funeral meal. "Do everything," she exhorts him, "so that I don't have to blush deep down in my grave."

All her life, Lalla Fatma never received a word of praise for her cooking skills. Expressions of emotion, writes Ben Jelloun, are not customary in her culture. Nonetheless, the writer's portrayal of the relationship between parents and children in this culture sharply contrasts that of those he has come to learn in Europe after many years of living in France.

No matter how serious his criticism of the manner in which Europeans deal with their elderly might be, the author manages to undermine his own credibility to a certain degree. Even in his family, the care of his ill mother was assigned to two house servants who were on hand around the clock.

On top of it all, these servants are the constant recipients of broadsides by the author in the book. "Course," "dull," and "greedy" are some of terms used to describe the two employees. Yet, neither Ben Jelloun nor his brothers are willing to assume any permanent presence by their mother's bed as she increasingly confuses day and night, past and present. Neither the author's wife nor his sister had to deal with the torn diapers, soiled sheets and clothes, or the nightly crises.

As a result, his criticism fails to ring true and is accompanied by an undertone of self-righteousness, as when Ben Jelloun lets us hear the hymns of praise that his mother heaps upon her favorite son or when the Swiss friend increasingly assumes the role of the author's unflattering mirror image. One would have preferred to put such embarrassments to one side and judge the book solely on its literary merits – such as the cutting glimpses into the state of mind of his ill mother.

These are the moments when she no longer recognizes herself and believes to see her grandmother or mother in the mirror instead. Or the passages that convey in a single sentence the misery of the Alzheimer's sufferer.

"Bored to tears and time appearing to crumble, you think about your every failure and every absence, looking at your own disintegrating image in a mirror riddled with holes, searching for traces of happiness in the hope of mending the cracks in one's soul as well as the words to save yourself from this painful hopelessness."

This article was previously published by the Swiss daily, Neue Zürcher Zeitung.

Tahar Ben Jelloun
The Barbarians Are Coming
Tahar Ben Jelloun, Moroccan author and intellectual, argues that Europe would benefit from the entry of the Maghreb states into the European Community

On the Death of Driss Chraïbi
Encounter with a Phantom Writer
Driss Chraïbi, the most important figure in contemporary Moroccan literature, died on April 1 at the age of more or less 80 years. Recollections by his translator, Regina Keil-Sagawe

Hamid Skif: "The Geography of Fear"
The Refrain of a Shadowy Existence
In Maghreb literature his voice is impossible to overhear: Hamid Skif. The Francophone author has gone on working in the name of human rights. In his new novel "The Geography of Fear" he gives shockingly authentic voice to an illegal immigrant. By Naima El Moussaoui

END_OF_DOCUMENT_TOKEN_TO_BE_REPLACED
Social media
and networks
Subscribe to our
newsletter