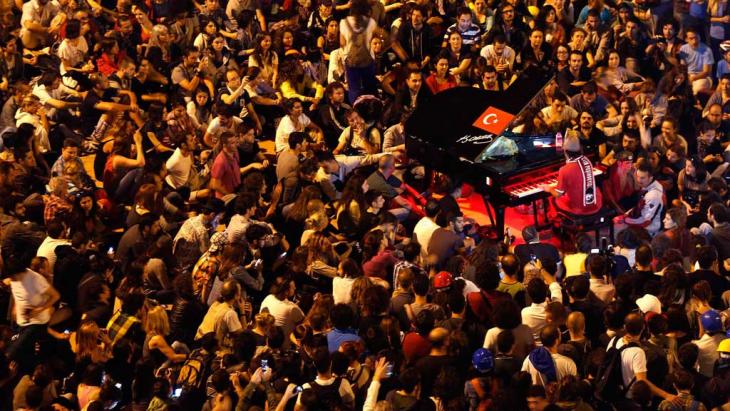 Tahrir and Taksim: two squares, one new culture of protest? In the second part of this two-part report, Amin Farzanefar looks at the how street art, music and film became essential parts of the new protest culture

If there is any slight difference between Tahrir Square in Cairo and Taksim Square in Istanbul, it is the differing degree of prevalence of the image and written word. The immense number of images and the mass of graffiti with its broad span of references and nuances found in Cairo were not repeated in Istanbul. There, the written word was omnipresent: there were appeals for solidarity, encouragement to keep going, declarations of public mourning, and, above all, countless mocking and ironic slogans and taglines, many of which directly targeted the prime minister.

Among the mass of sarcastic responses to the widespread use of gas against demonstrators, was a message on a central city kiosk which read "Ayran yok! Biber Gazi var!" (We may not have ayran, but we have plenty of pepper spray). The image of a martial looking "Ayranman" in the iron man superhero costume alluded both to a statement made by Prime Minister Erdogan (who claimed that the national drink of Turkey was not raki but the yoghurt-based ayran) and to his self-fashioned image as a "man of steel".

There were slogans on almost every surface, even on the overturned and burnt-out wrecks of cars where the addition of words often provided "ready-made" art objects replete with new shades of meaning. In one instance, a television was plastered with the word "Yalan!" (Lie!).

In this way, the urban environment not only became the canvas that carried revolutionary slogans but also the primer for creative puns (the city as a comic) and collections of links. Everywhere one encountered hashtags: #Redhack, Resistanbul, occupygezi and direngezi. 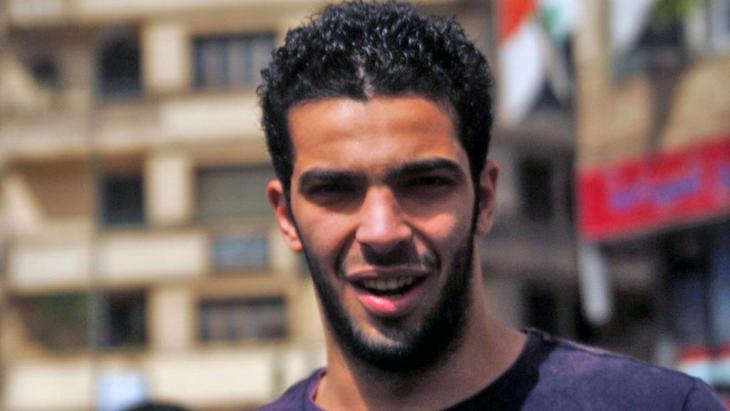 The Egyptian performer Ramy Essam is best known for his song "Leave" in which he called for President Mubarak to resign. It became the unofficial anthem of the revolution. He also performed before demonstrators in Tahrir Square in 2011. When the square was cleared by the army in March of that year, he was arrested and tortured

The sound of pots and pans

Interaction also became a characteristic feature of music: in April – long before the police violence began – solidarity concerts were held in Gezi Park. Bands and musicians were subsequently among the most creative participants, rewriting old protest songs, adding new content to existing love songs or writing new ones. When the nightly beating of pots and pans as an expression of solidarity was banned, the well-known group Kardeş Türküler responded with a song entitled "Sound of pots and pans" that featured kitchen utensils as musical instruments. This multi ethnic group has been taking its inspiration from the diverse musical cultures of Turkey since the 1990s and thus virtually embodies the pluralistic concerns of the protest movement.

In Egypt, the role of music was arguably even more important. Many of the alternative groups that had been forced underground finally managed to find their audience during the revolution, either at concerts on Tahrir Square or as a result of the tens of thousands of clicks on their Internet videos.

The soundtrack to the revolution was provided by, among others, numerous rock and rap performers: "Rebel" by Arabian Knightz or A-Rush, "Leave" by Ramy Essam, "Egyptian Intifada" written by Ahmed Fouad Negm and sung by Sheik Imam, or the ultimate romantic revolution anthem "The Voice of Freedom" by Amir Eid, Hany Adel and Sherif Mostafa.

The rise of electro Sha'abi music

An entirely new kind of music, electro Sha'abi, which had its origins in the Sha'abi music that emerged from the poorer working-class districts of Cairo in the early 1970s, found its way from the outskirts into the centre of the city. Artists such as Amr Haha, DJ Figo, Sadat, Oka and Ortega, and above all Islam Chipsy, used their songs to ridicule the promises of the revolution. In one song, the line "The People Want Revolution" was changed to "The People Want Five Pounds Phone Credit" proving not only its adaptability but also the musicians' closeness to the people.

Graffiti showing a protester flashing a victory sign with Arabic slogan "Don't give up" painted on the ground in Tahrir Square in Cairo in 2011. After demonstrators had blocked traffic in the square with their protests, artists covered the asphalt with paint, leaving behind works of graffiti that stretched across several lanes of traffic

Among the most important activist groups on Tahrir Square were Egyptian filmmakers. Frustrated by decades of censorship and the painfully slow processes involved in obtaining permission for their film projects, these filmmakers became the "eyes of the revolution", seeking out alternative perspectives that contrasted sharply with the catastrophic reporting of the official media. The Cairo collective Mosireen is now attempting to document the chronology of events with the help of the films it has collected.

In Istanbul, Videoccupy created another similar archive, which endeavoured to provide diverse and easily accessible information. Surprised by the sudden escalation in events, the international Documentarist Film Festival moved its screenings and competition directly to Gezi Park.

Despite recent successes, Turkish film-making is still largely rooted in the 1970s and 80s. Although it was revitalised by a transfusion of new ideas and stimuli during recent events, it is likely to be months, perhaps even years, before the results of this become visible.

The tent camps have gone from Cairo and Istanbul, and art has settled back into its everyday role in the niches of the social sphere. Given the pressing nature of current political problems, a cultural renaissance is not particularly high on the agenda. There is no doubt, however, that the explosive release of creative energies that has taken place will continue to affect cultural life, as well as the way in which artists perceive of themselves and their work, way beyond the preliminary end of the unrest, the most obvious indication of which is the fact that the formerly "restricted zones" of Tahrir and Taksim have been re-opened to traffic.

The events that have taken place in and around these squares have made one thing crystal clear: whatever lies within the realms of possibility can be achieved.

Social media make many things possible – including the unwanted circulation of intimate private photos. This has given rise to new forms of crime and sexual blackmail. An ... END_OF_DOCUMENT_TOKEN_TO_BE_REPLACED

The change in U.S. president is also having an impact on the conflict between Turkey and Greece. Since the USA has started to play the Greek card, the strategic situation in the ... END_OF_DOCUMENT_TOKEN_TO_BE_REPLACED

Arab women played a leading role in the protest movement of 2011. Since then, ongoing social transformation has had a considerable impact on their lives. What is their assessment ... END_OF_DOCUMENT_TOKEN_TO_BE_REPLACED

They’ve already got the Louvre; they’ll soon have a Guggenheim Museum as well – and now the Emirates have added literature to their quest for cultural supremacy in the Arab world ... END_OF_DOCUMENT_TOKEN_TO_BE_REPLACED

Years in the making, Sisi's elite New Administrative Capital will isolate most Egyptians from their centres of government in an effort to fortify the regime against any social ... END_OF_DOCUMENT_TOKEN_TO_BE_REPLACED

Professor Timothy Brennan's "Places of Mind: A Life of Edward Said" is a detailed biography of one of the most important intellectuals of the twentieth century, taking us on a ... END_OF_DOCUMENT_TOKEN_TO_BE_REPLACED
Author:
Amin Farzanefar
Date:
Mail:
Send via mail

END_OF_DOCUMENT_TOKEN_TO_BE_REPLACED
Social media
and networks
Subscribe to our
newsletter