Afghan-born Tamim Ansary has written a history of the world that takes Islam as its central focus. Events are related from a Muslim point of view, beginning with the life of the Prophet through to September 11th, 2001. Review by Klaus Heymach 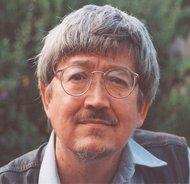 Tamim Ansary, born in Kabul in 1948, grew up in his father's home country, Afghanistan. His mother was an American of Finnish origin. He is the author of the best-selling memoir "West of Kabul, East of New York"

​​ Ten years ago Tamim Ansary was contracted by a Texan schoolbook publisher to develop a new history of the world for the junior high school curriculum. The publishers envisaged ten units, with three chapters each. But which thirty events represent the history of mankind? There was to be not more than one chapter on Islam, at any rate, the publisher insisted.

For Ansary, who grew up in Kabul, it was not enough to include Islam in this history as a glossary, a digression, a note in the margin. The author, who came to the United States at the age of 16 on a high school scholarship, is not a missionary; he is not even a practising Muslim. Only his family name reveals that he is a descendent of the Ansar, the "Supporters", the name given to the first Muslims from Medina.

Yet Ansary believes that there is a second history that exists alongside the Western version in the text books. "A completely independent and alternative history of the world; a competing narrative to the one I was supposed to write for the Texan publisher."

Islam – a civilization of its own

For Islam is not simply a belief system, Ansary claims. He argues that it could be discussed as part of the school curriculum alongside communism, democracy and fascism, as it is also a social project that regulates politics, economics and justice – as well as a civilization of its own that has achieved outstanding accomplishments in arts and crafts, and one of many world histories. 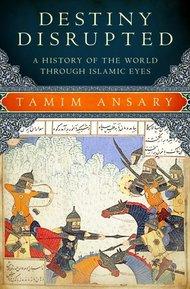 In Destiny Disrupted, Ansary recounts world history as it looks if one assumes that the heart of the world is situated somewhere between the Indus and Istanbul

​​ Like two parallel universes, the West and the heartland of Islam existed alongside each other for centuries – and ignored each other. For a long time, writes Ansary, each regarded itself as the centre of world history. He comments that it was only in the 17th century that the two perspectives began to overlap. "And because the West was more powerful, its narrative prevailed and suppressed the other."

Ansary now tells the other version in his book. "Destiny Disrupted: A History of the World through Islamic Eyes" is not a schoolbook, nor is it an academic thesis. The author is not a historian. The 61-year-old, who now lives in San Francisco, has written an entertaining book, replete with anecdotes, that relates "what happened from a Muslim perspective" – a "human drama".

The apparently inevitable dominance of the West

Ansary not only compares the lives of caliphs, sultans, and reformers; he also probes the big questions that still characterize the tense relationship between Orient and Occident today. How did this apparently inevitable Western dominance come about? What led to the clash of these two universes on 11th September 2001? Are we really experiencing a clash of civilizations?

Readers from West and East alike will profit from this book and its discussion of these questions, because Ansary takes an extremely enlightening approach in his world history. He explains how the sciences already existed more or less as we know them today under the Abbasid caliphs – seven centuries before their genesis in western Europe. 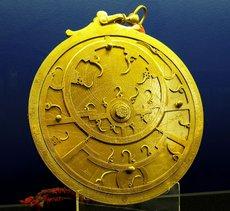 Civilizational competition: Islamic astronomy had a significant influence and Western astronomy, but during the Age of Industrialization century Europe gained superiority in the field of scientific innovation: 18th century Persian astrolabe

​​ He shows how Muslim inventors were on the verge of many discoveries – and yet did not come up with the idea of "putting a steam drive into machines that would make it possible to manufacture consumer goods on a mass scale".

In a society with millions of craftsmen, an abundance of products and efficient networks, Muslims would have seen no need for industrialisation, writes Ansary. Mercantilism, reformation, individualism, and the drive to make new discoveries played into European hands. They were simply the right conditions.

"Trade is the opposite of war"

And then the two worlds met again. After the crusades, which Ansary describes as far less dangerous for Islam than the subsequent attacks by the Mongols, the Europeans came as traders. The author stresses that this was never a clash of civilizations: "Trade, after all, is the opposite of war."

In the U.S. Ansary gained notoriety with an e-mail in September 2001, sent initially only to friends, in which he addressed the Bush government's plans to bomb Afghanistan back to the Stone Age. ("The problem is, Afghanistan is already in the Stone Age.")

Ansary writes in his book that the West wants to defend freedom and democracy in the Hindu Kush and Iraq, but that the militant Islamists' rhetoric is not targeted at a free democratic form of government, it is targeted at moral decay. They said: "You are decadent!" and the West replied: "We are free!"

These two positions are, quite simply, talking at cross purposes. In Ansary's opinion they are symptomatic of many things in the relationship between the Islamic world and the West. "Each side recognizes the other only as a character in its own narrative," as he puts it. With his "History of the World through Islamic Eyes" the author opens the eyes of both sides to the other's point of view – so that they can at least see clearly what it is they are talking about.

Reza Aslan's "No God but God"
Demonstrating the Modernity of Islam
Reza Aslan is an Iranian-American writer whose first book, No God but God, met with widespread acclaim. In her review for Qantara.de, Helena Sabbagh praises Aslan's combination of academic knowledge and an easy-to-read tone

Interview with Ilija Trojanow
"What Is the Other?"
The subject of Ilija Trojanow's acclaimed novel "The Collector of Worlds" is about real-life British adventurer Sir Richard Francis Burton, a polyglot colonial captain, who apparently converted to Islam to facilitate his entry into the inner circles of Muslims. Interview by Ulrike Sárkány

History of Islam
Breathtaking Diversity
Gudrun Krämer, Professor of Islamic Studies at the Free University in Berlin, has written a history of Islam from the beginnings to the present day, from its outer limits in Asia to its furthest Western outpost in Andalusia. By Mona Naggar

Comments for this article: World History from an Islamic Perspective

Tamim Ansary's "Destiny Disrupted" is the best book I have read in the last two or three years. I have not only learned a lot about the history of the Islamic world, his insights in the developments of the West, such as the main features of the Reformation, which he compares to the Islamic thinking, are extremely lucid. His style is so light and enjoyable that you can't stop reading. Tamin Ansary transmits to the reader the passion he has for his subject without ever wanting to impose his judgement on the historical facts. What a marvelous book!

END_OF_DOCUMENT_TOKEN_TO_BE_REPLACED
Social media
and networks
Subscribe to our
newsletter