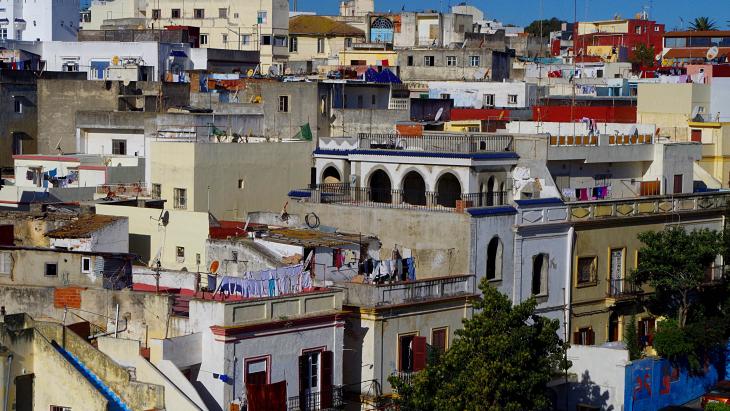 Tangier, Morocco
Of myths and modernity

It was American literary figures who propagated the myth of the city of Tangier in north-western Morocco as a den of permissiveness and danger. Notwithstanding this Western view of the city, Tangier is to this day a city that belongs to no specific culture or continent. Claudia Mende takes us on a literary tour

Time has stood still in Cafe Hafa. The pale blue plaster is peeling off the walls. A handful of young people are sitting on plastic chairs in the open-air cafe, gazing out to sea. In the distance, container ships glide through the Straits of Gibraltar.

You can just about make out mainland Spain from here. Here, Europe is quite literally so near but yet so far, completely out of reach for most Moroccans. Instead, the young people congregate in Café Hafa, which first opened its doors almost a century ago. It was American writer Paul Bowles' favourite haunt in Tangier. Here, he would while away the hours, drinking mint tea and writing.

Where seas and continents meet

Tangier is situated in the in-between, at the point where seas and continents meet. The Mediterranean and Atlantic converge here at the north-westerly tip of Morocco. Nowhere else are Europe and Africa so close: only 15 kilometres separate Morocco from the Spanish mainland. Tangier, which was also home to the Phoenicians and the Greeks, is the longest-inhabited place in Morocco, a hub of trade and exchange, but also a disputed, strategically important bone of contention.

Paul Bowles came to the city sometime around 1950 on the recommendation of Gertrude Stein. He fell in love with the easy Mediterranean life here and stayed until his death in 1999. He arrived just in time to experience the wild years of the Tangier International Zone.

From 1923 until Morocco's independence in 1956, Tangier was under international administration. No less than nine European powers held the reins of power here. It was a golden age for smugglers, drug dealers and spies.

Since Ali Khamenei, Iran's most powerful man, has openly and unconditionally come out in support of Putin's war in Ukraine, logistical help is on its way, with an allegedly ... END_OF_DOCUMENT_TOKEN_TO_BE_REPLACED

Tourists have been returning to Tunisia, Egypt and Morocco. But, given the global uncertainty caused by the Ukraine war, will the comeback be enough to save a struggling sector, ... END_OF_DOCUMENT_TOKEN_TO_BE_REPLACED

The highly controversial Indian blockbuster "The Kashmir Files“, on the exodus of Kashmiri Hindus in the 1990s, is characterised by unilateral representations, negative ... END_OF_DOCUMENT_TOKEN_TO_BE_REPLACED

"Flugt" is the world's first museum dedicated to the stories of those forced to flee. The new museum, which focuses on the fates of refugees then and now, is housed in a former ... END_OF_DOCUMENT_TOKEN_TO_BE_REPLACED
Author:
Claudia Mende
Date:
Mail:
Send via mail

END_OF_DOCUMENT_TOKEN_TO_BE_REPLACED
Social media
and networks
Subscribe to our
newsletter