Many U.S. authors fled their claustrophobic, prudish homeland and flocked to Tangier, where the cost of living was low and you could smoke kif (hash) and indulge in cheap sex of all kinds. Most people eventually left the city, but Paul Bowles remained, writing his existential stories and travel reports about growing weary of Western civilisation and the pointless search for something better.

In the American Legation Museum on the edge of the old Medina hang posters for Italian star director Bernardo Bertolucci's "The Sheltering Sky", the film version of Bowles' eponymous novel. Black-and-white photographs show the melancholy individualist working at his typewriter and recording traditional music. Bowles was not just a writer, but also a composer and was one of the very few Western writers to show an interest in the culture of the country where he was living. He drove around the country, making recordings of traditional music. The resulting recordings now constitute the most important ethnographic collection of Moroccan music. 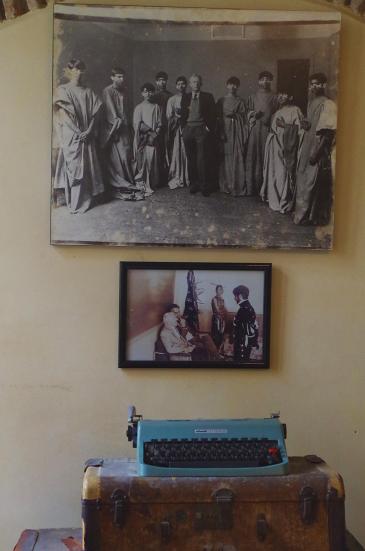 Time travel with beat-authors through Tangiers: In the American Legation black-and-white photographs show the melancholy individualist working at his typewriter and recording traditional music. Bowles was not just a writer, but also a composer and was one of the very few Western writers to show an interest in the culture of the country where he was living. He drove around the country, making recordings of traditional music. The resulting recordings now constitute the most important ethnographic collection of Moroccan music

A survey of old photographs shows that not much has changed in many of the legendary cafes formerly frequented by the bohemians.

In the 1950s and 1960s, the now jaded Grand Cafe de Paris was patronised by writers like Tennessee Williams, Jack Kerouac, Truman Capote and William S. Burroughs, who discussed everything under the sun, most of the time in a fog of drugs or alcohol. Today, the clientele is very different: now it is usually groups of old men and the odd woman who sit contemplating and cogitating. A sign on the glass door leading to the cafe bans laptops. Dreaming, it would appear, is permitted; working is not.

With their works, the American writers erected a memorial to Tangier. At the same time, however, they damned it into becoming a literary fiction. Reality and fantasy are blended, creating a narrative where the Orient is a sensual, exotic backdrop. They were barely interested in the lives of the locals. Tangier became a dream destination for Westerners who had grown weary of Western civilisation.

The oldest bookshop in Tangier

On Boulevard Pasteur, only a five-minute walk from the Grand Cafe de Paris, is the oldest book shop in Tangier, which was founded in 1949. Right from the word go, the "Librairie des Colonnes" was a place where the cultural community could meet and engage. This is where Paul Bowles ordered his books. Today, things are quiet in the bookshop. Bookseller Monsef Bouali is alone and has time for a chat.

He has been working in the shop for about 30 years, he says. He has very different things on his mind and has no time to think about a nostalgic, transfigured version of the past. Like bookshops all over the world, the "Librairie des Colonnes" is struggling because people are reading less.

No one gets lost in a book in a cafe any more, says Bouali with a hint of sadness in his voice. And anyway, he adds, books are expensive in Morocco. "Today's young poets have it no easier than Paul Bowles' contemporaries when it comes to publishing their books."

During his lifetime, Bowles supported Moroccan writers. He translated Arabic texts into English and made contact with publishing companies. The works of unknown writers such as Mohammed Choukri are now considered classics of modern Moroccan literature.

The disappearance of Razan Zeitouneh and her colleagues has been one of the greatest mysteries of the Syrian war – until today. DW's investigative unit hunted clues across six ... END_OF_DOCUMENT_TOKEN_TO_BE_REPLACED

Muslims in Europe regularly experience threats, witness attacks and are the target of hate across national borders. Now the Council of Europe, the continent's leading human rights ... END_OF_DOCUMENT_TOKEN_TO_BE_REPLACED

The West is pulling out of Afghanistan after 20 years, but the conflict remains – and the Taliban are stronger than they have been for a long time. And now? The renowned Taliban ... END_OF_DOCUMENT_TOKEN_TO_BE_REPLACED

United States and NATO troops are leaving Afghanistan after 20 years, despite the fact that the Taliban is still advancing. The German Bundeswehr is already out. Sandra Petersmann ... END_OF_DOCUMENT_TOKEN_TO_BE_REPLACED

END_OF_DOCUMENT_TOKEN_TO_BE_REPLACED
Social media
and networks
Subscribe to our
newsletter