"Taqwacore: The Birth of Punk Islam"
As Rebellious As It Gets

Islamism, punk, rebellion, and the clash of civilisations all packed into one road movie. The film Taqwacore: The Birth of Punk Islam has it all. It has also won a number of documentary awards. Mathias Bölinger went to see the film

Islamism, punk, rebellion, and the clash of civilisations all packed into one road movie. The film Taqwacore: The Birth of Punk Islam has it all. It has also won a number of documentary awards. Mathias Bölinger went to see the film 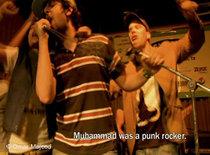 A "cool Islam" that causes confusion and ultimately doesn't know exactly what it stands for: Taqwacore on stage

​​"I am the Islamist, I am the Antichrist" they sing. Taqwacore – The Birth of Punk Islam is about a punk band that refers to itself as Islamist. You can't get more rebellious than that.

"Anyone who wants to understand us will see that in the middle of this so-called 'clash of civilisations' we are giving the finger to both sides," says the founder of Taqwacore, Michael Muhammad Knight.

Born into an Irish Catholic family, he converted to a fundamentalist Saudi version of Islam at the age of 16 and eventually ended up in the punk scene. Now he wants to be both. "There is a cool Islam; you just have to find it. You just have to work your way through everything else, but it does exist."

Evenings in basement bars, mornings on the prayer rug

Taqwacore – which is a mixture of the Arabic word "taqwa" (devout) and the English word "hardcore" – is what these Muslim punks, who met in Boston, call themselves. They spend their evenings playing in basement bars, but every one of them is up again, praying on their prayer mats, at 5 a.m. With its breakneck speed and amazing images, the film tells the story of young people who solve their dilemma in the most radical way possible. 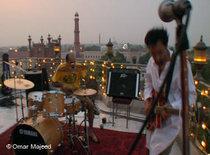 Playing to the gallery: after touring the US and causing a commotion at a Muslim convention in Chicago, the band travels to Pakistan for experiences of a very different kind

​​The fact that they love to play to the gallery is a gift to film-maker Omar Majeed, a Canadian with Pakistani roots. In a dilapidated old green bus, the band tours America, enjoying the attention they are being paid.

It goes without saying that a few provocative statements are made in the course of the film, like the time when they warn a mechanic to take great care repairing the bus's engine. "We don't want the bus to explode before we want it to explode," says one.

The high point of the tour is a performance at the Islamic Convention in Chicago, the largest of its kind in America. The convention has an open stage for young Islamic artists.

When the Muslim punks take to the stage, the audience – and in particular the young women in headscarves – are not quite sure what to make of it all and are uncertain whether they are supposed to be enjoying the performance. Eventually, they carefully start to move to the music.

But when the Pakistani-Canadian drag king Sena Hussain, a woman who slips into the role of a man, appears on stage, it's all over. The stewards release the audience from its pangs of conscience and ends the concert. The convention had boldly declared that all forms of Islam are acceptable as long as they do not incite violence.

In the words of the organisers, however, the policy sounds very different. "I told them: no female singers, no dancing. The performance has to be appropriate to Islam. It is not my opinion that women are not allowed to sing. It is our policy."

Self-discovery at the Sufi shrine

Naturally, a guitar gets broken, albeit not in the ensuing commotion inside; but smashed intentionally on the pavement outside the convention centre. Sounds like the perfect end to a story about punks. 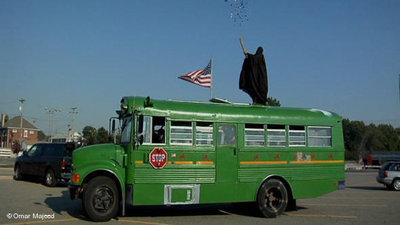 The bright green tour-bus with a US flag: Mathias Bölinger concludes that at the end of the day, the best place to rebel really is at home

​​But then the protagonists are drawn into the heart of the conflict between the West and Islam. They travel to Pakistan, visit a Sufi shrine, realise that music and Islam somehow suit each other, take part in a self-flagellation ceremony, and spend a few weeks smoking hash.

The only thing that doesn't quite go according to plan are the performances. It is at this point that the film loses the momentum of the first half. The wild boys become contemplative and suddenly realise that it's not all fun to be in the no-man's land between all civilisations.

The confident rebels suddenly become insecure and more careful in their provocations. In the end, they do manage to play a concert and succeed in getting both the poor youths in kaftans and they wealthy kids who are part of the big city in-scene to rock together.

They leave out the provocations that were part of their performances in the USA. Instead they criticise George W. Bush on stage – which really doesn't pass as a provocation in Pakistan. It seems that the best place to rebel really is at home.

Protest Songs in Iran
Tired of the Kiss of the Whip
Since the controversial presidential election last June, Iranian musicians of all genres have created a multi-layered song repertoire. Their songs are an attempt to come to terms with the bloody suppression of the opposition and demands for political freedom in Iran. By Jan Engelhardt

Junaid Jamshed
"I Was a Sinner for Years"
Junaid Jamshed was the first pop star on the Pakistani music scene. At the height of his career, he turned his back on the world of glitz and glamour and devoted himself to Islam. A portrait by Nadia Riaz

Islamic Pop Music in Turkey
Combining Rock Music with an Islamic Message
In Turkey today, traditional Islamic music is giving way to the hard rock sound of "Yesil Pop". But along with the normal rock beat and guitar rifts, comes not a message of sex and drugs, but rather praising God. Dorian Jones reports

Heavy Metal in Egypt
Respectable Rebels
In the early 1990s, heavy metal bands in Egypt were branded as Satanists by religious hardliners and persecuted. Today it is much easier for them to perform in public. Arian Fariborz checked out the heavy metal scene on the Nile

END_OF_DOCUMENT_TOKEN_TO_BE_REPLACED
Social media
and networks
Subscribe to our
newsletter