Victims of Corruption and Enemy Stereotypes

The flood victims of Pakistan are being left to their fate – help from the West is hesitant due to the rampant Islamophobia triggered by September 11th. The Pakistani government is paralysed and the nation's elite corrupt, criticises author Tariq Ali in his comment piece

A disaster of Biblical scope: The floods triggered by heavy monsoon rains a month ago have affected more than 17.2 million people and killed over 1,500, according to Pakistan's disaster management body

​​ August is always the monsoon season in Pakistan. This year a hard rain keeps falling, which is why the floodwaters are not abating. Nearly two thousand deaths and over 20 million people are homeless. The man-made disasters – war in Afghanistan, its spillage into Pakistan – are bad enough. Now the country faces its worst ever natural disaster. Most governments would find it difficult to cope, but the current regime is virtually paralysed.

Over the last sixty years, the ruling elite in the country has never been able to construct a social infrastructure for its people. This is a structural defect that goes deep and affects the bulk of the population adversely. Today the country's rulers blindly follows the neoliberal dictates of the IMF to keep the loans flowing. Not helpful at the best of times they are useless when the country is undergoing its worst humanitarian crisis of recent decades.

Pathetic response of the West

The response of the West has been less than generous causing panic in Islamabad with pro-US journalists in the country pleading that if help is not forthcoming the terrorists might take over the country. This is total nonsense. The Pakistani Army is firmly in control of the flood-relief effort. The religious groups and others too are raising money and helping the homeless. It's normal. 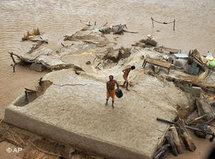 Most governments would find it difficult to cope with this terrifying natural disaster, but Pakistan's current regime is virtually paralysed, says Tariq Ali

​​ There is speculation as to why the West's response has been so pathetic. Some argue that the country is perceived as a haven for terrorists and that this element, exaggerated out of all proportion, is hampering donations from North America and Europe. The problem is deeper and doesn't just apply to Pakistan.

Since 9/11 a rampant Islamophobia has gripped Europe and parts of North America. A recent opinion-poll in "multicultural Britain" revealed that when asked what their first thought was on hearing the word "Islam" over fifty percent replied "Terrorist". France and Germany, Holland and Denmark, are no different.

This treatment of Islam as the permanent "other" is not unrelated to the wars in Iraq and Afghanistan but the attitude is as wrong as the widespread of anti-Semitism that ignited prejudice and worse during the first half of the 20th century. A million Iraqis dead since the occupation: Who cares? Afghan civilians dying every day: It's their own fault. Pakistani engulfed in floodwaters. Indifference. That is undoubtedly one reason for the lack of response.

Another is home-grown. Many citizens of Pakistani origin I have spoken to in recent weeks are reluctant to send money because they fear it will end up in the huge pockets of the corrupt leaders who govern the country. As the floodwaters began to surge through Pakistan, the country's President left for Europe. Properties had to be inspected; his son had to be crowned as the future leader of Pakistan at a rally in Birmingham, England. 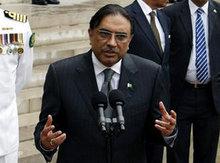 "1000s dying, president is holidaying": As images of a drowning country were being shown on European television, Pakistan's president was on his way to his 16th century chateau in the French countryside

​​ The coronation in Birmingham was postponed. It was too crass even for the loyalists. Instead Zardari delivered an appalling speech and a Kashmiri elder, angered by the nonsense being spouted, rose to his feet and hurled one of his shoes at the businessman-president calling him "corrupt and a thief". Zardari left the hall in anger. "Zardari joins the Shoe Club with Bush" was the headline in the largest Pakistani newspaper.

Some demonstrators held up shoes to pictures of Zardari, while others held placards reading, "1000s dying, president is holidaying", "Thousands killed, millions homeless" and "Are the Zardaris enjoying England while Pakistan drowns?" None of this helped raise more money.

As images of Pakistan coping with the crisis and of its destitute people were being shown on European television, a French air force helicopter was transporting the richest man in Pakistan to his most extravagant European property, the 16th century chateau, Manoir de la Reine Blanche, with its five acres of parkland, lakes and forests. Originally built for the widow of King Philippe VI it is now the property of the Pakistani widower. How can he afford it? Everybody knows. Pay-offs from companies investing in the country. 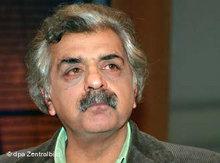 Tariq Ali is a British Pakistani historian, novelist, filmmaker, political campaigner, and commentator: He has been a leading figure of the international left since the 60s

​​ Back at home the Jang group, the country's largest media empire, was advised by the government to exercise restraint and not show images of the shoe-throwing incident on Geo TV. They rejected the suggestion and instead interviewed the shoe-thrower.

Unable to curb YouTube, Zardari's men switched Geo and another network, ARY, off the air in Karachi and parts of Sind. And hundreds of Zardari's jiyalas, i.e. unthinking party loyalists, gathered outside Geo's Karachi office, pelting the building with stones and shoes. All in reaction to Geo's decision to report on the shoe-hurling incident.

Tariq Ali, born 21 October 1943, is a member of the editorial committee of the New Left Review and Sin Permiso, and regularly contributes to The Guardian, CounterPunch, and the London Review of Books. He is the author of several books, including Can Pakistan Survive? The Death of a State (1991), Clash of Fundamentalisms: Crusades, Jihads and Modernity (2002) and Conversations with Edward Said (2005).

Refugees in Pakistan
Incapable Government
Pakistan has to cope with more refugees and internally displaced persons than any member of the European Union. State authorities have proven unable to support them adequately. Popular suffering, however, compounds the Islamist militancy that is threatening the country's security. Mohammad Ali Khan reports from Peshawar

Pakistani Conflict Scenarios
If Pakistan Were to Disintegrate...
In this essay, political scientist Herfried Münkler analyses Pakistan's on-going political crisis. What would happen if Pakistan were to disintegrate as a state and territorial unit?

END_OF_DOCUMENT_TOKEN_TO_BE_REPLACED
Social media
and networks
Subscribe to our
newsletter