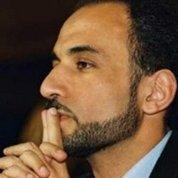 The Muslim Martin Luther - or ideologue-in-chief for a conservative interpretation of religion? Tariq Ramadan polarises opinion

​​ The man is a political hot potato: Time magazine calls him the "Islamic superstar" and lists him as one of the 100 most important people in the world; for others, however, he is a wolf in sheep's clothing or a soft-core Islamist.

One thing is for sure: Tariq Ramadan is certainly Europe's most admired Muslim; Germany has no one to offer who combines heavyweight intellectualism with charisma and appeals to and veritably thrills the public the way he does. Audiences at his appearances lap up his every word, and young people in particular see the attractive, confident and very eloquent man in his mid-40s as a beacon of hope.

His manner and his interpretation of Islam give them a new access to their religion; a route that allows them to be both devout and modern.

Tariq Ramadan as an exemplary case

Nina zu Fürstenberg's book Wer hat Angst vor Tariq Ramadan? (Who's Afraid of Tariq Ramadan) is a welcome opportunity to present Ramadan in more detail. The author, an Austrian journalist based in Rome and Zurich, is the director of Rome's international cultural association Reset Dialogues on Civilizations.

In recent years, the association has organised numerous conferences and symposia, at which prominent Western and Islamic intellectuals have considered the future of Islam in the modern world together. Thanks to these events, Nina zu Fürstenberg is brilliantly familiar with the material – and with Tariq Ramadan, a welcome discussion partner whenever the subject of Islam in Europe is on the agenda. 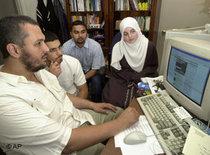 Tariq Ramadan is expert at disseminating his ideas via the new media, aiming his speeches explicitly at young Muslims in Europe

​​Nina zu Fürstenberg says she did not intend to write a biography. But, she says, the way Europe deals with Tariq Ramadan is an exemplary case, illustrating "how we in Europe deal with the challenge of integrating Islam in Europe."

One of the leading voices of French Islam

For many who know little more than his name, Tariq Ramadan seems to be a threat because of who he is – the grandson of Hasan al-Banna, founder of the Muslim Brotherhood. This grouping is still banned in Egypt to this day, as it champions the cause of establishing an Islamic state. A state ruled by Islamic law, the sharia.

Tariq Ramadan's father Said fled to exile in Switzerland and set up an Islamic centre in Geneva. Tariq was born in Switzerland in 1962. He gained a PhD in Islamic Studies and has become one of the leading voices of French Islam through countless lectures, debates and books.

He speaks only on his own behalf and is not a member of any organisation such as the Muslim Brotherhood. Nor does he represent the brotherhood's agenda in Europe, as critics have repeatedly suggested.

"Fear of Islam is apparently laming our sense of reason"

Ramadan became an international media star in the wake of a controversy he engineered with Jewish intellectuals in France, whom he accused of "communitarianism", bias in favour of Israel. There followed a televised debate on the headscarf with France's then interior minister Nicolas Sarkozy in November 2003, further raising his profile. But why should anyone be afraid of Tariq Ramadan, as the title of Nina zu Fürstenberg's book suggests?

Nina zu Fürstenberg maintains that fear of Islam is apparently laming our sense of reason and prompting over-reactions. This is the only explanation she can find for the fact that Ramadan is always immediately pigeonholed, and nobody listens to him properly.

Nina zu Fürstenberg has written a good introduction to the ideas and arguments of this charismatic intellectual. At various points, her presentation of Ramadan's argumentation could have gone into greater detail. On the other hand, however, that would have made the book less readable, and the author would have overshot her original goal of writing an easily accessible introduction for a broad audience.

​​ Fürstenberg presents Ramadan's basic ideas and opinions, explaining his standpoint on various subjects, including the reinterpretation of Qur'anic statements for example. Yet she also covers areas that have placed Ramadan in the public eye: his views on the issue of Israel and Palestine or stoning.

In contrast to many radical reformers who downgrade sharia law to mere moral guidelines, Ramadan does not talk of the need to abolish stoning. Instead, he is in favour of a moratorium on the practice. This standpoint has garnered him accusations of not being a truly profound reformer.

Yet Ramadan wants to appeal to several different constituencies at once: secularised young Muslims in the banlieues of Lyon, Paris and Marseille, left-wing globalisation critics, and not least the people of the Arab world. This balancing act often makes him appear ambiguous, as if he were speaking with a forked tongue. Tariq Ramadan is not a liberal reformer. Yet nor is he the reactionary Islamist many are now branding him. He is simply a conservative.

So what is the bottom line, both for the reader and for Nina zu Fürstenberg, after spending several years analysing Tariq Ramadan and his ideas? Is he a man we can trust? The author is uncomfortable with unequivocal answers: "I can't know what his final idea is."

But reading his work has brought her to the conclusion that his views "are not so far away from what I'd call our liberal and democratic ideas." Even if Ramadan did want to Islamify Europe, however, Fürstenberg concludes with confidence, "there are others with something to say on the matter: us."

It is this very approach that makes the book so likeable; an approach that doesn't know everything, is not biased and refuses to either condemn or praise across the board. Instead, the book merely attempts to describe and present its subject. And to give a man a chance, a man who is studying Islam in the modern European world and looking for solutions. What form these will eventually take is up to all of us to influence together.

Book Review Ralph Ghadban
Tariq Ramadan and the Islamization of Europe
The charismatic Geneva-based Tariq Ramadan dominates current European discussion on Islam like no other Islamic intellectual. A critical study of the work of Ramadan has now been published. A review by Jürgen Endres

Essay Tariq Ramadan
The Contradictionsof the Islamic World
Tariq Ramadan, controversial Professor of Islamic Studies at the University of Fribourg, argues that instead of blaming only the West, Muslims need to start to criticise themselves in order to strengthen their position

Portrait Tariq Ramadan
Role-Model for Muslim Youths throughout Europe
Islamic scholar Tariq Ramadan is the idol of the Parisian suburbs. He is fighting for a modern Islam and against what he calls "Jewish intellectuals". Now the US administration has revoked his visa. By Jörg Lau

END_OF_DOCUMENT_TOKEN_TO_BE_REPLACED
Social media
and networks
Subscribe to our
newsletter