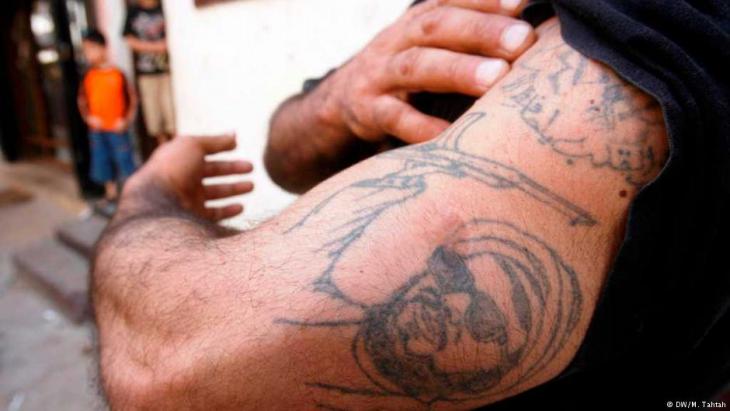 Tattoo trends from Beirut to Baghdad

In the spirit of rebellion

For some it's about following a trend; for others, tattoos are a symbol of their faith, but whatever the reason, the fashion for stylish tattoos is fuelling a growing subculture across the Arab world. By Mey Dudin

The Lebanese artist known as El Harb makes his living from something long regarded as taboo. He is a tattoo artist and customers at his Beirut studio have the choice of adorning their bodies with anything from black tribals and Arabic calligraphy to realistic portraits. There is also a growing market for religious subjects, though some motifs, such as the name of Allah remain taboo for devout Muslims. "Nobody is sufficiently pure."

There are many among the younger generation in the Arab countries who are questioning the strict social mores of their elders while, at the same time, remaining true to the culture. One expression of this trend is to be found in the growing popularity of tattoos. As part of his "Arab Ink" project, photographer Bashar Alaeddin has been collecting stylish motifs since 2014 and exhibiting them on Instagram and Facebook. For him, it's about bringing to light a subculture that previously was pretty much unknown and given little attention.

"It is still a taboo subject," he says," that is not going to change overnight." He has noticed that ever more people are ignoring the taboo however. About half of those he photographs are women. And although most of them have their tattoos on parts of the body where it will not be seen, "the very fact that they choose to have something meaningful tattooed on their skin at all, says something significant."

There is a general belief in Arab societies that tattoos are "haram", forbidden by Islam. Most people are of the opinion that tattoos are tampering with God's creation. The only tattoos permitted, therefore, are temporary ones – using henna for example. According to Alaeddin, the choice of Arabic calligraphy for a tattoo has nothing to do with religion. "But it does have everything to do with Arab culture and with a generation of young Arabs wanting to express themselves."

Lebanon is one of the centres of the Arab tattoo scene. One of the reasons for this being the constant discord prevailing between the various groups of Christians, Sunnis, Shias and Druze that allows subcultures the space they need to develop more freely. "Trendy tattoos are becoming more and more popular", says tattoo artist El Harb, whose pseudonym means "war" in Arabic. And with Instagram setting the pace of change in fashion trends, most of those who come to him are looking to have their old or ugly tattoos covered up by the latest styles. "Cover-ups are the main part of my business," he says. 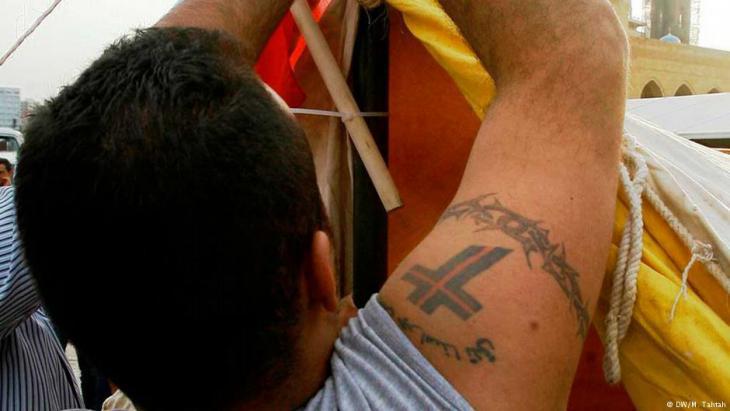 Crucifixes and Jesus tattoos are very popular among the Maronites: Lebanon is one of the centres of the Arab tattoo scene. One of the reasons for this being the constant discord prevailing between the various groups of Christians, Sunnis, Shias and Druze that allows subcultures the space they need to develop more freely

The fashion for tattoos has even taken hold among conservative Shias in Lebanon. They choose to have images of their religious idols tattooed onto their skin, images that serve both as an expression of their faith and as a provocation to radical Sunnis who regard tattoos as sinful. "Shias have no problem with tattoos," says El Harb. They will tattoo themselves with the name of Ali, the much venerated son-in-law of the Prophet Muhammad, or with some of his words. The number 313 is also sought after as it represents the number of companions, according to Shia belief, who shall accompany the Imam Mahdi. Ali's holy sword, Zulfiqar, is yet another popular motif.

Wrath of the religious police

Even Sunnis from the stricter Gulf countries, such as the Wahhabi Kingdom of Saudi Arabia are to be found among El Harb's clients. On their return to their homeland, however, they must ensure that their tattoos are covered up or run the risk of incurring the wrath of the religious police. There was no special treatment either for Columbian footballer Juan Pablo Pino when he was arrested by the guardians of public morals in a shopping mall in 2011 for the crime of publically displaying a tattoo. Indignation sparked by the episode was intensified by the revelation that the Al Nasr Riyadh player's upper arm tattoo was a depiction of Jesus.

Yet tattooing also has a long tradition in the region. Berber women, for example, have been tattooing their faces for generations. Many Coptic Christians in Egypt have a distinctive cross tattooed on the insides of their wrists. Scientists discovered tattoos of animals and plants on an ancient mummy found at Deir el Medina, close to the Valley of the Kings in Egypt. The mummified body was that of a woman who had lived over 3,000 years ago. 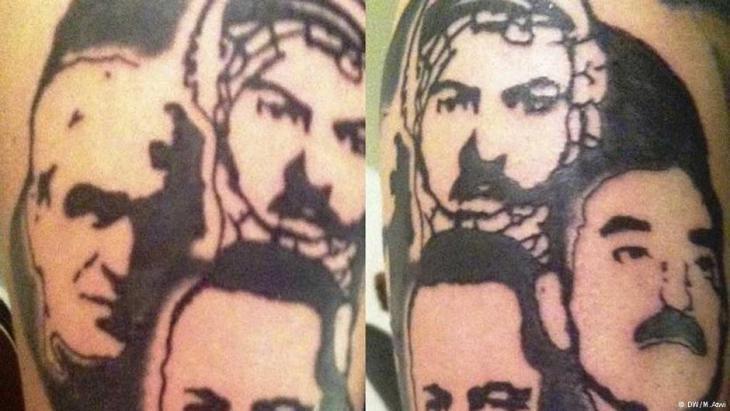 The tattoo as political statement: a man from Beirut shows off the faces of the leaders of the PFLP (People′s Front for the Liberation of Palestine) tattooed onto his biceps

Tradition has it that people wore tattoos at the time of the Prophet Muhammad. It is said, however, that the Prophet declared that the curse of Allah would be on any woman wearing a tattoo or having herself tattooed.

From "green man" to religious fanatic

It is from this hadith that conservative Sunni groups derive their attitude to tattoos – and some extremists also. Abu Musab al-Zarqawi, leader of the terror network al-Qaida once had so many tattoos that he was known to neighbours as the "green man". It was during his time in prison that he turned from being a criminal into a religious fanatic. Procuring a razor blade, he proceeded to cut the tattoos out of his skin one by one.

In Baghdad, where a small tattoo scene has grown up over the past few years, Ibrahim and a partner also run a business. Ibrahim is a Shia, his partner a Christian; they import colours, needles and equipment from the US. "God gave us a body to do with as we please," says Ibrahim. Young Shias also like to point to what has been said by their most important spiritual leader in Iraq, Ayatollah Ali al-Sistani. According to him, there is no such thing as a universal ban on tattoos in Islam.

War is the main provider of motifs for tattoos in Iraq at the moment. "We do a lot of portraits," says Ibrahim. "Faces of soldiers killed fighting, whose relatives want to have them memorialised in a tattoo – often with name and date of death included." Men tend to prefer tattoos in black and grey. Women often tattoo their eyebrows and will choose pictures of birds or butterflies. New customers will usually begin with something quite small – a motif popular everywhere in the world: "Mother" in Arabic or English.

Why are predominantly Muslim countries lagging behind when it comes to democracy and human rights? Dutch sociologist Ruud Koopmans uses a lot of figures to underpin his theory ... END_OF_DOCUMENT_TOKEN_TO_BE_REPLACED

The 2015 Joint Comprehensive Plan of Action with Iran is in jeopardy. European governments should use the JCPOA’s dispute-resolution mechanism both to pursue immediate measures to ... END_OF_DOCUMENT_TOKEN_TO_BE_REPLACED

Many predominantly Muslim countries have penal laws against "blasphemy", "defamation of religion" and "apostasy". In practice they serve as highly effective weapons to settle ... END_OF_DOCUMENT_TOKEN_TO_BE_REPLACED

In recent years, Tehran had pushed a clever public-relations campaign to depict Soleimani as a Napoleon- or Caesar-like warrior-poet. He was even mooted as a likely presidential ... END_OF_DOCUMENT_TOKEN_TO_BE_REPLACED

Taking the Fridays for Future movement as his starting point, Muslim environmental expert Tarik Quadir talks to Marian Brehmer about the connections between Islam and ... END_OF_DOCUMENT_TOKEN_TO_BE_REPLACED

Equality in divorce, a ban on polygamy: reformers of Islamic family law have a clear agenda. They are exploiting the ambiguity of traditional jurisprudence. By Joseph Croitoru END_OF_DOCUMENT_TOKEN_TO_BE_REPLACED
Author:
Mey Dudin
Date:
Mail:
Send via mail

END_OF_DOCUMENT_TOKEN_TO_BE_REPLACED
Social media
and networks
Subscribe to our
newsletter