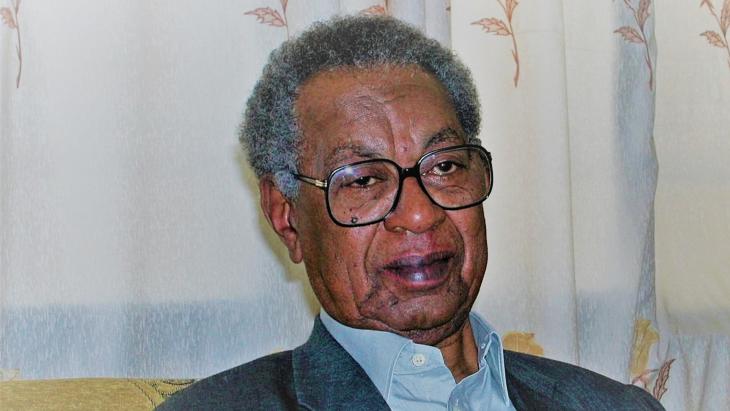 Widely acknowledged as one of the twentieth century’s great writers – think "Season of Migration to the North" – most of Tayeb Salih's work is surprisingly overlooked. The publication in posthumous translation of "Mansi: A Rare Man in His Own Way" has therefore been met with delight by fans. Marcia Lynx Qualey read the book

The book is not a "lost" fiction, like Naguib Mahfouz’s recently discovered Whisper of Stars. It is, instead, one of Salih’s late-in-life non-fictions. For the most part, Mansi is a portrait of a colleague and friend who is alternately known as Michael Joseph, Mansi Yousif Bastawrous, and Ahmed Mansi Yousif. This short, potbellied man from rural Egypt had what Salih describes as “Napoleonic energy”. Yet Mansi’s enormous drive was aimed not at world domination, but rather at scams, seduction, bluster, jokes, and haggling.

Mansi appeared in Arabic in 2004, long after Salih had stopped publishing fiction. Unlike Salih’s most powerful fictions, this work does not centre around the vibrantly imagined Sudanese village Wad Hamid. That was the focus of his short stories in the early 1960s, The Wedding of Zein (1964), Season of Migration to the North (1966), and his two Bandershah novellas (1971 and 1976). Then, after the second Bandershah novella appeared, Salih never published another, though he was to live for around 30 more years.

A shift to non-fiction

In the late 1980s, Salih began to publish literary essays in the London-based journal al-Majallah. His series of “Mansi” essays was launched in 1988, a year after his friend’s death, Babikir writes in his introduction. They were finally collected together in book form sixteen years later. 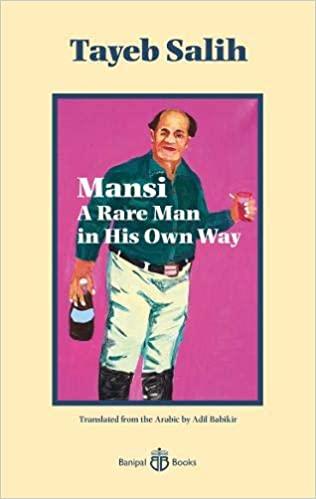 "Adil Babikir's translation captures the cadence and humour in Salih's voice," writes award-winning author Leila Aboulela. "At times I did wish for less of the impish Mansi and more of Salih. But nevertheless, it was a joy to keep company with the genius behind 'Season of Migration' and I hope more of his non-fiction writing will be made available to English language readers"

Yet Mansi: A Rare Man in His Own Way does not read like a series of essays. Instead, it unfolds like a novel, with short, fast-paced chapters sometimes ending in cliffhangers, leaving the reader wondering: will Mansi get deported from the UK? Will he get Tayeb Salih fired? And what madness will he try next?

Babikir tells us, in his introduction, that many Arabic readers in fact "misread the book as a novel". It is easy to see how this might happen, since Mansi is portrayed as the sort of trickster capable of more than merely smuggling vast amounts of ladies’ underwear past Lebanese customs.

He successfully presents himself to Queen Elizabeth, marries into English nobility, and leaps up to debate MP Richard Crossman about Palestine. And Mansi apparently knew so little about Palestine that he told Salih minutes before the debate, "Stop fussing. Just tell me quickly about this Balfour Declaration and all that nonsense."

Structurally, the book has echoes of Salih’s famous Season of Migration to the North. The larger-than-life Mansi is not unlike Season’s Mustafa Saeed: an enigmatic and dominating presence. And this is also the story about the book’s narrator, in this case Tayeb Salih. We see the great author both during his years at the BBC and later, when he is working for the government of Qatar.

Yet in Mansi, unlike in Season, the relationship between narrator and subject is largely played for comic effect. They are Laurel and Hardy, Salih suggests, and it is a joy to see the author laugh.

Salih tells us that he met Mansi in 1953, soon after his arrival in the UK. Salih had a job at BBC Arabic, where Mansi was apparently a stringer. The pair developed a strange friendship, beginning – it seems – with Mansi’s attempt to bribe Salih with a pair of ugly socks. On Salih’s part, the relationship seems to have been part fondness, part fascination, and part irritation. Yet the friendship endured for more than three decades, despite the number of times Mansi got Salih into hot water at work, at social events, and with various governments.

Salih describes Mansi as unattractive: "flabby, having a large potbelly and protruding bottom, which made him look more like a ball cut into two halves: upper and lower." Yet he also describes him as a womaniser, who "never lacked the company of girls, who would fall in love with him." Mansi met his first wife, a wealthy descendant of Sir Thomas More, at a gathering of the Young Conservatives. Soon, he was moving from his modest apartment into a mansion.

Yet while Salih depicts Mansi as a charming storyteller, his friend apparently could not channel his imagination into art. Mansi played minor roles in films, and he was endlessly trying to use his connections to seize something larger. 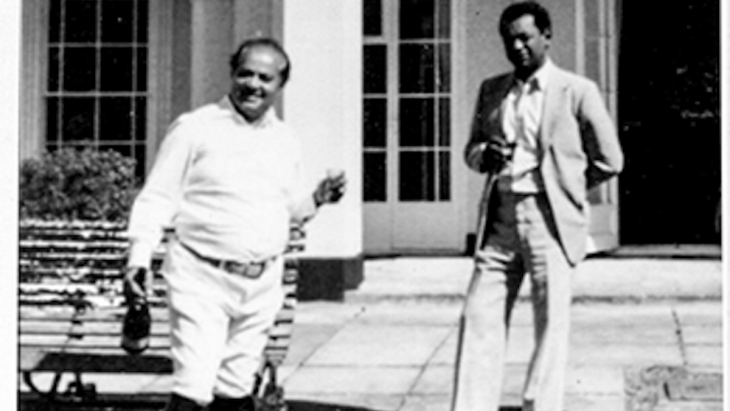 Larger than life: Tayeb Salih described Mansi as "flabby, having a large potbelly and protruding bottom, which made him look more like a ball cut into two halves: upper and lower." Yet he also describes him as a womaniser, who "never lacked the company of girls, who would fall in love with him"

"Had he had the slightest acting talent," Salih writes, "these connections could certainly have taken him to stardom. He was definitely a talented actor on life’s stage, but in art, it was a different story. Once placed in front of a microphone or camera, he would become ridiculously shy or over-react."

Mansi also wrote plays, which Salih found "dull and lifeless". And yet Mansi managed to worm his way into the inner circle of no less than Irish Nobel laureate Samuel Beckett. Salih seems almost envious as he writes: "What did Samuel Beckett find in Mansi?" Salih suggests that Beckett "might have found [in Mansi’s writings] something attractive, just as great painters would sometimes find appealing features in children’s drawings."

We can’t judge for ourselves, since Mansi apparently never published his literary works. Nor does his name turn up in a cursory search of the British press. This is a disappointment, considering the number of high-profile scrapes he seems to have been in. Mansi goes so far as to claim Princess Margaret fell for him, and one almost expects to find him in an episode of The Crown.

This book is neither as mysterious nor as intricately constructed as Season or Bandershah. But it makes for a fast, joyful read, while also illuminating parts of the Arab diaspora in the 1960s and ‘70s. Yet at the end, Salih reaches not toward his or Mansi’s life in the UK, but toward a future where exile is ended.

He says, with a folktale-like lyricism, that he hopes for a time when "migrating birds will return to their nests and nights will be thrilling and amusing again[.]" The book’s last wish is for conflicts in Lebanon and Sudan to end, and especially for a return to Palestine.

Home
Print
Newsletter
More on this topic
Obituary: Tayeb Salih – Season of Literary Migration to the SouthTayeb Salih′s ″Season of Migration to the North″: A literary hall of mirrorsInterview with Sudanese-Egyptian writer Leila Aboulela: The challenge of identity in a non-monochrome world
Related Topics
Arabic literature, Book reviews, Literature
All Topics

Two refugees detained in Egypt are facing deportation to Eritrea. The expulsion of the Eritreans, who have been incarcerated in Cairo for more than eight years, has been halted ... END_OF_DOCUMENT_TOKEN_TO_BE_REPLACED

On the 10th anniversary of the Arab Spring we can’t quite escape that substance called remembrance. Yet, eschewing facile modes of nostalgic remembrance and/or tragic lamentation ... END_OF_DOCUMENT_TOKEN_TO_BE_REPLACED

Mass protests began in Egypt on 25 January 2011. They triggered the overthrow of long-time ruler Mubarak. Ten years later, many human rights activists and journalists are in ... END_OF_DOCUMENT_TOKEN_TO_BE_REPLACED

Mass protests began in Egypt on 25 January 2011. They triggered the overthrow of long-time ruler Mubarak. Ten years later, many human rights activists and journalists are in ... END_OF_DOCUMENT_TOKEN_TO_BE_REPLACED

Hosting major sports tournaments can confer prestige on a country, but in the case of Egypt, the 2021 Handball World Championship will do little to repair relations with either ... END_OF_DOCUMENT_TOKEN_TO_BE_REPLACED

Ten years after the start of the Arabellion in North Africa and the Middle East, many view the movement as a failure. But rather than being over, it has now entered a more mature ... END_OF_DOCUMENT_TOKEN_TO_BE_REPLACED
Author:
Marcia Lynx Qualey
Date:
Mail:
Send via mail

END_OF_DOCUMENT_TOKEN_TO_BE_REPLACED
Social media
and networks
Subscribe to our
newsletter