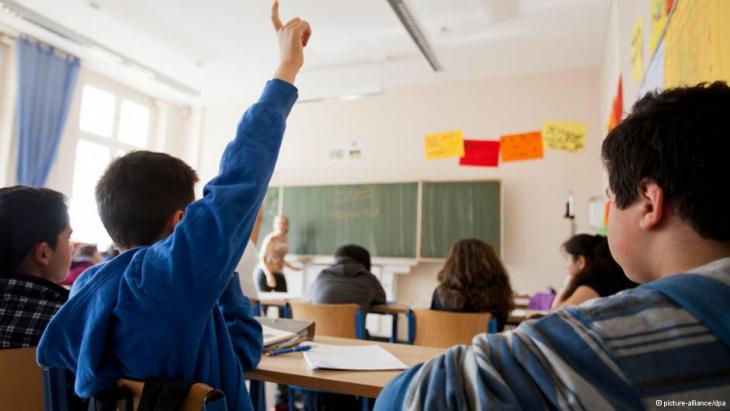 Teachers with a migrant background

They are desperately sought after and yet they still face discrimination: teachers with a migrant background are often regarded as "exotic" at German schools. According to a recent study, all that many of these teachers want is normality. By Anke-Martina Witt

Saraya Gomis is a teacher at one of Berlin's "problem" schools. She does not want to talk about her age or where her parents come from, as she sees these details as a source of potential prejudice and clichés. "It's enough to say that I am a black woman," she says. And as the only black teacher at her school, she is frequently regarded as "exotic". Experts estimate that although the number of students with a migrant background is constantly rising, the number of teachers with a migrant background accounts for only between one and five per cent of all teachers.

"My students like diversity," observes Gomis. A black pupil once said to her that she didn't even realise that black people could become teachers. "I want to show them that they can achieve everything, regardless of where they come from," she says. Her students have long since stopped regarding her as exotic.

"You blacks tend to be funny"

It is a different story, however, with certain parents, relates Gomis. "Many mothers and fathers came to my first parent-teacher meeting, because they wanted to see a black teacher," she recalls. Of course, this could be regarded in a positive light; the parents were simply interested. "Yet, many parents even went out of their way to touch me in order to prove that they weren't racists." In this way, acts performed with the best of intentions can quickly turn into discrimination, she says.

She has also experienced more or less open racism in the staffroom. "Not one of my colleagues is a committed racist," concedes Gomis. Their actions and remarks are much more subtle. For instance, she has heard comments like "we whites tend to be more intellectual, while you blacks tend to be more funny." 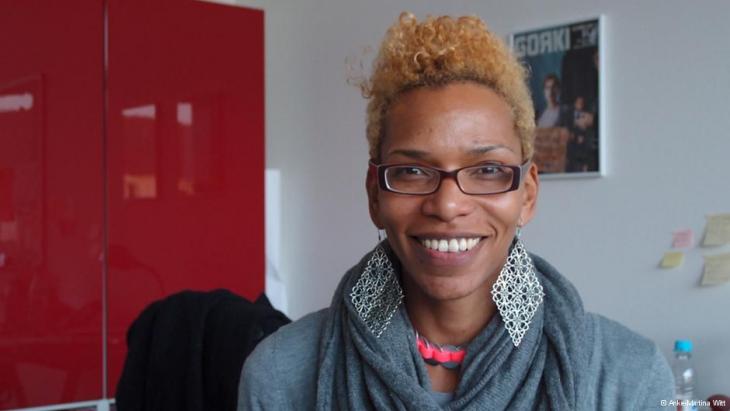 As a black teacher, Saraya Gomis (above) has to cope with both direct and subtle prejudices and clichés at work. While she admits that none of her colleagues are racists, they do sometimes make thoughtless or insensitive comments

Part of everyday life at school

These are not just the isolated experiences of Saraya Gomis. Aysun Kul is currently conducting research at the University of Bremen on the experiences of student teachers with and without a migrant background. "A student teacher with a Turkish background reported that a colleague once asked her if she was allowed to marry a German," recalls the 37-year-old researcher. "This might have been just a harmless question, but it is highly questionable that this is an appropriate way of establishing first contact."

In one of the first Germany-wide studies on the topic of "diversity in the classroom", researchers Viola B. Georgi, Lisanne Ackermann and Nurten Karakaş set out four years ago to study discrimination against teachers with a migrant background. The researchers evaluated 200 questionnaires and conducted 60 biographical interviews.

The result was that more than 22 per cent of these educators reported having experienced discrimination and racism during the normal school day. "This discrimination occurs at various levels," explains Viola B. Georgi, director of the Centre for Inclusion in Education at the University of Hildesheim. Comments are made about a teacher's accent, for example, or they have to put up with insinuations about their religion.

Reduced to a "special role"

Yet, the picture remains ambiguous. The other side of the coin is that the majority of those questioned stated that they have experienced a great deal of acceptance, recognition, and esteem from their colleagues. "Teachers with a migrant background are often also appreciated for the role they can play as bridge builders, for example, helping out as interpreters during talks with parents," reports Georgi. Many are happy to take on this role. Problems, however, occasionally do arise.

"They don't want to be reduced to this special role alone," observes the researcher. First and foremost, teachers are responsible for all the children, and this is equally the case for teachers with a migrant background. Aysun Kul confirms this viewpoint. "It all depends on how the teachers see themselves and on how great a role their migrant background plays for them," she asserts. "Some of them simply want to be teachers, without any focus on their backgrounds." 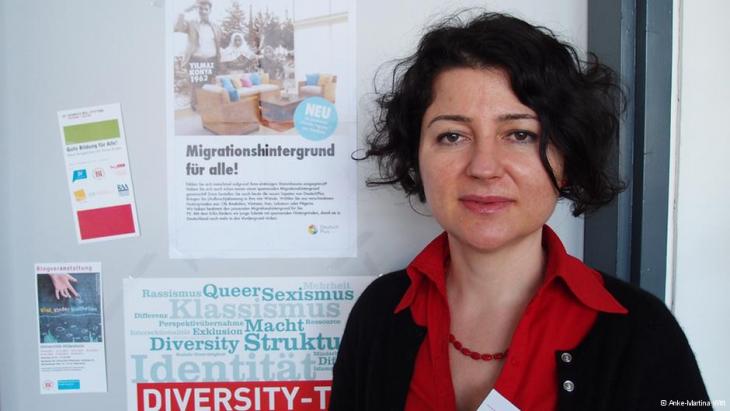 The subject of Nurten Karakaş's doctoral thesis is how teachers with a migrant background react to instances of discrimination. While some want to take action and address the matter openly, others prefer to remain silent or try to justify themselves

The teachers involved in the study deal with their experiences of discrimination in a variety of ways, reports Nurten Karakaş, who is currently working on this topic for her doctoral dissertation. "Some say, now more than ever it is time to deal with this topic in schools," explains Karakaş. Others prefer to remain silent or attempt to justify themselves.

Nevertheless, all of the education experts agree that schools should employ more teachers with a migrant background. The diversity in the classroom should also be mirrored in the staffroom, they say; only then can linguistic, cultural and religious differences be truly perceived as the norm.

Saraya Gomis also feels that there is an obligation on teachers without a migrant background. "We also need 'white, German' teachers who have received transcultural training and who are aware of the issue of discrimination."

Some companies in Germany are reluctant to hire Muslims. But it is not only the Muslim applicants who are losing out, so too are the companies. After all, there are multiple ... END_OF_DOCUMENT_TOKEN_TO_BE_REPLACED

The European Court of Justice has given its backing to companies that don't allow female Muslim staff members to wear headscarves – as long as they don't permit the wearing of ... END_OF_DOCUMENT_TOKEN_TO_BE_REPLACED

Ayaan Hirsi Ali’s new book "Prey" claims to examine how Muslim immigration threatens the rights of Western women. Indeed the injustices women face only seem to matter to her when ... END_OF_DOCUMENT_TOKEN_TO_BE_REPLACED

The Saudi national team is set to play the German Olympic squad at the Olympics in Tokyo later this month – a chance for the outsiders to make their mark. At the same time, and ... END_OF_DOCUMENT_TOKEN_TO_BE_REPLACED

I regret very much that I worked for the Bundeswehr. If the Taliban knock on my door, I hope they shoot me right away. Guest article by Ahmad Jawid Sultani END_OF_DOCUMENT_TOKEN_TO_BE_REPLACED

Muslims in Europe regularly experience threats, witness attacks and are the target of hate across national borders. Now the Council of Europe, the continent's leading human rights ... END_OF_DOCUMENT_TOKEN_TO_BE_REPLACED

Comments for this article: More or less open racism

There is an acute shortage of teachers in all inner cities schools where Muslim pupils are in majority. DFEE and LEAs are campaigning for young Muslims to join teaching profession. In my opinion the campaign will fail to attract them. British education is the home of Institutional racism. State schools have never welcomed foreign qualified Muslim teachers. In the time of dire need they have been used as cheap labour. They were penalized for taking time off for prayers or for religious festivals. Even few Muslim students in the Colleges/schools of Education do not feel comfortable with their tutors who have no respect or knowledge of their needs and demands.

Majority of Muslim children is at the bottom of the educational ladder. They need state funded Muslim schools with Muslim teachers who understand their needs and demands. Removing of story books on pigs, hot cross buns or Croissants from schools is not going to help Muslim children to develop Islamic Identity or please Muslim community. It only shows that state schools are unaware of the needs and demands of the Muslim children. Muslim parents are being penalized for taking their children back home for holidays. LEAs do not want Muslim children to know or learn any thing about their cultural heritage. Their aim is to anglicise them. Muslim children even feel ashamed to speak their mother tongue in front of others.

The British born Muslims are unable to read and write Arabic and Urdu languages and unfamiliar with Islamic literature and poetry. They are unable to understand the spirit of Islam by reading few translated books. They are not in a position to educate Muslim children because they are cut off from their cultural roots. They are suitable for those schools where natives are in majority. They may be called ethnic teachers but not Muslim. Ethnic is a Greek word meaning “pagan”. A Muslim is a Muslim and he/she is nothing to do with ethnicity or paganism or Asianism. Muslim teachers must be well versed in Standard English, Arabic or Urdu languages to teach National Curriculum, Islamic studies, Arabic and Urdu languages. Muslim teachers are needed in Muslim schools and state schools where Muslim pupils are in majority. For Muslims, English is an economic language while Arabic and Urdu is religious, social and emotional language. Qualified Muslim teachers could be recruited from Muslim countries to teach Muslim pupils and in a matter of few years British born Muslim youths well versed in English, Arabic or Urdu languages could be available to join teaching profession. They will be Muslim teachers and not ethnic.

END_OF_DOCUMENT_TOKEN_TO_BE_REPLACED
Social media
and networks
Subscribe to our
newsletter