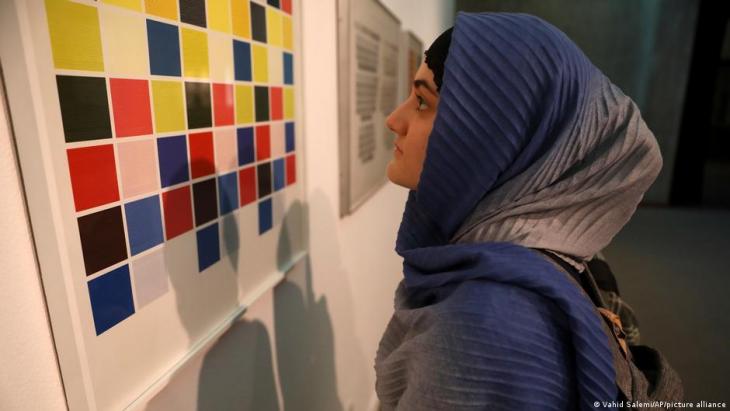 For the first time in decades, contemporary Western artworks, from Donald Judd to Christo, are on public display in the Iranian capital. They had long been locked away so as not to offend Islamic values. By Suzanne Cords

A transparent mural by conceptual artist Marcel Duchamp, minimalist art by Sol LeWitt and Donald Judd, and works by packaging artist Christo are just some of the more than 130 works by 34 world-famous artists from the West that currently have Iranians flocking to the Tehran Museum of Contemporary Art. The exhibition has seen about 20,000 visitors since it opened in June – twice as many as previous shows at the venue.

"The reception has been marvellous," said museum director Ebadreza Eslami. Speaking to news agency AFP, he attributed the great interest to the fact that 38 masterpieces from the "Minimalism and Conceptual Art" exhibition are being exhibited for the first time ever. Museum spokesman Hasan Noferesti added it is simply exciting to see long-hidden modern masterpieces.

Presenting Western works to the public is not a given in the Islamic Republic. Shia President Ebrahim Raisi, a devout cleric, regularly rages against Western influence. Local artists who deviate from Iran's "revolutionary culture" face harsh penalties. Western contemporary art was long kept locked up, including the collection now on show. 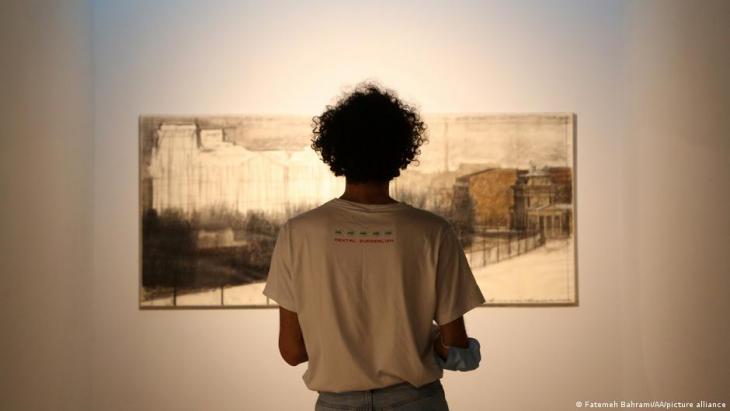 On display in Iran for the first time in decades: a transparent mural by conceptual artist Marcel Duchamp, minimalist art by Sol LeWitt and Donald Judd, and works by packaging artist Christo are just some of the more than 130 works by 34 world-famous artists from the West that currently have Iranians flocking to the Tehran Museum of Contemporary Art

It was put together in the 1970s by Farah Diba Pahlavi, the wife of the-then Shah, Reza Pahlavi. Worth millions, the collection is considered legendary. It is also the largest modernist collection outside Europe and the USA.

In 2017, the former empress told DW that she had discovered various Iranian painters and sculptors during the biennial organised by the Iranian Ministry of Culture in the early 1960s, which gave her the idea for a contemporary art museum in Tehran. The collection was to include Western works of art, too. And why shouldn't it, she argued – "The whole world has our art in its museums."

When the museum opened in 1977, works by Pablo Picasso, Mark Rothko, Claude Monet, Paul Jackson Pollock, Rene Magritte and other big names hung on the walls alongside paintings by local artists.

Just two years later, the Islamic Revolution swept the Shah from the throne. The new head of state, Ayatollah Khomeini, lamented the moral and sexual depravity of the West, which he believed had infected the Islamic world. Considered "un-Islamic" and "corrupt", the Western art collection was moved to the museum's depot.

Farah Diba recalls she was very worried at first about the fate of the artworks, and that they might even be destroyed. "Fortunately the collection is still relatively complete – except for a portrait of me by Andy Warhol that was in the foyer of the museum. That was completely destroyed, and so were some sculptures by sculptor Bahman Mohasses." 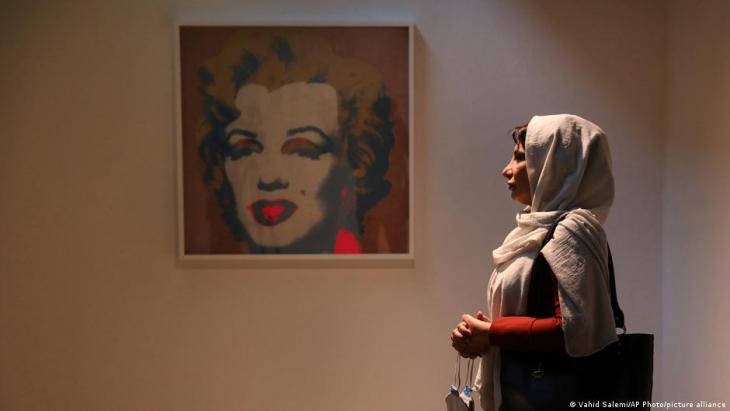 A glimpse of Andy Warhol's work: following the Islamic Revolution, Ayatollah Khomeini lamented the moral and sexual depravity of the West, which he believed had infected the Islamic world. Considered "un-Islamic" and "corrupt", the Western art collection was moved to the museum's depot

Back in the spotlight

For a long time, the collection lay dormant in the museum depot. Few of the works were showcased in the West, until they gradually began to reappear in 2005, during the political thaw in Iran, including paintings by Andy Warhol, Vincent van Gogh, Jack Pollock and other artists from the West. Nudes however stayed hidden in the basement.

Young Iranians in particular show great interest in international art, often resorting to social media. The fact that works so long under lock are now being shown prompts some people to go see the exhibition more than just once.

"Setting up a show with such a theme and such works is a bold move that takes a lot of courage," said Babak Bahari, who went to marvel at the artworks four times. "Even in the West these works are at the heart of discussions and dialogue," he told The Guardian newspaper.

Iranian artist Parastou Forouhar has lived in Germany since 1991. Full of rage, just like the protesters, she hasn't yet given up on the idea of justice. By Julia Hitz END_OF_DOCUMENT_TOKEN_TO_BE_REPLACED

Fariduddin Attar’s "The Conference of the Birds", one of the seminal works of Islamic mysticism, has recently been published in sumptuously illustrated German translation. It ... END_OF_DOCUMENT_TOKEN_TO_BE_REPLACED

In "Iran. Die Freiheit ist weiblich", journalist Golineh Atai describes the dogged resistance of courageous Iranian women against the Islamic Republic and the mullahs who have ... END_OF_DOCUMENT_TOKEN_TO_BE_REPLACED

The violent death of 22-year-old Mahsa Amini has achieved something the entire opposition has failed to do during the 43-year rule of the ayatollahs in Iran: almost the entire ... END_OF_DOCUMENT_TOKEN_TO_BE_REPLACED

Like Christianity, Europe's history is one of migration. Both have strong roots in the Orient and in cultures thousands of years old. Cultural historian Bernhard Braun invites us ... END_OF_DOCUMENT_TOKEN_TO_BE_REPLACED

A lot is happening in Syria’s Sweida Governorate – foreign intervention there is unprecedented both in terms of scale and number of actors – yet Damascus remains the dominant ... END_OF_DOCUMENT_TOKEN_TO_BE_REPLACED
Author:
Suzanne Cords
Date:
Mail:
Send via mail

END_OF_DOCUMENT_TOKEN_TO_BE_REPLACED
Social media
and networks
Subscribe to our
newsletter