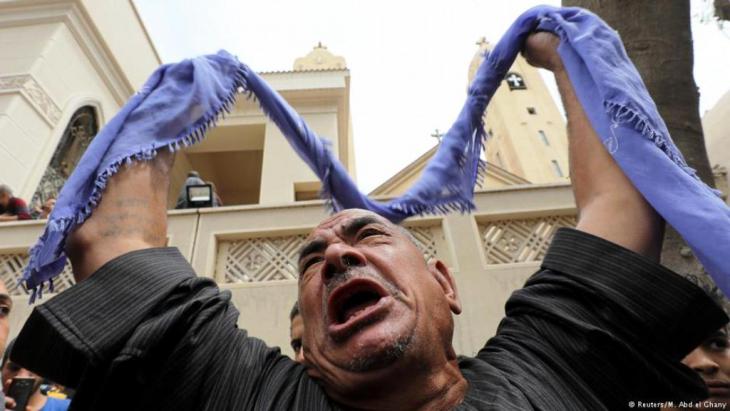 Terror attack on Egypt′s Christian minority
Why the Coptic focus?

Last week′s heinous bus attack was just the latest in a wave of brutal terrorist strikes by the Islamic State group on Egypt′s minority community of Coptic Christians. In his essay, the Egyptian writer Shady Lewis Botros looks at why the Copts in particular are bearing the brunt of these vicious assaults

In the latter half of December 1988, in what became known as Ain Shams I, the Egyptian authorities launched a massive security campaign against the strongholds of Jamaat al-Islamiyya (″The Islamic Group″) in Ain Shams in eastern Cairo. This was in reaction to four months of violence which had erupted in the area following the assassination of Captain Muhammad Zikri by the group.

Ain Shams II, in which churches and businesses owned by Copts and their homes in the neighbourhood were subjected to synchronised attacks, leading to a number of victims, was triggered by the nocturnal storming by Egyptian security forces of Adam Mosque. This state incursion on the mosque, the seat of Jamaat al-Islamiyya′s influence, acted as a prelude to bloody violence lasting for days.

And yet, the violence that escalated after the ′fitna′ or civil unrest of Al-Zawiya al-Hamra was motivated mostly by social tensions against the backdrop of a crisis in church building, romantic and sexual relationships between the two religious groups, not to mention religious conversion. 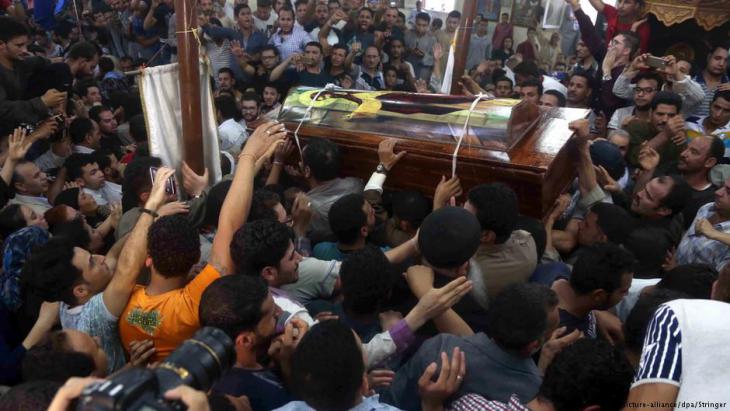 Things have moved on: the latest announcement by Islamic State in Egypt about the specific targeting of Copts, the continuing attacks against them in Sinai which have emptied the peninsula of Copts, the subsequent bombing of the ″Botroseya″ Church of St. Peter and St. Paul in Cairo in December 2016, the Palm Sunday bombings and the savage bus attack in May 2017 have all happened in a domestic and regional context which is fundamentally different from that which existed during the violence of the 1980s

Attacks were also occasionally carried out by individuals not affiliated to Jamaat al-Islamiyya or similar. With the exception of several attacks on jewellery shops owned by Copts, mostly cases of simple robbery and – from the mid-1970s onwards – the odd murder or violent attack against Coptic students in the universities of Upper Egypt, Islamist jihadist organisations had yet to put Copts on their list of ideological targets.

Ain Shams II was a turning point in the history of violence against the Copts: what happened there was the most blatant and distinctive form of targeting, in which the sole motive was revenge against the state and nominal compensation for the group′s defeat at the hands of the security forces.

Copts a ″side show″

To those Islamist groups who had previously ignored the Copts as a potential target, the Christian minority was largely a side show. Since the mid-1970s, Islamists had been primarily concerned with the more ambitious target of taking seizing power, either through a quick coup, or a more protracted ″revolutionising of the cities″ leading to an uprising akin to that of the Iranian Revolution.

These organisations therefore infiltrated the army, targeted the takeover of military establishments – hence the Military Technical College attack in 1974 – and even assassinated the very president of the Republic in 1981. In addition, they almost succeeded in taking over the governorate of Asyut and its security headquarters, just days later. Subsequently, they assassinated the speaker of the parliament and a number of writers and intellectuals, as well as attempting the assassination of the interior minister.

Moreover, they imposed their control in parts of the country ranging from the poorer areas of Cairo to the governorates of Upper Egypt and its universities. In short, for them the Copts were a secondary target which had no bearing on the Islamists′ principal aspiration of gaining power at some point. Even when the Copts were targeted directly, it was a means and not an end.

While the attacks on jewellers were driven by a mix of purely criminal motives and a pragmatic need to garner funds, the violence against Copts in universities – such as the killings at Asyut University – should be seen in the context of a larger campaign of violence by Islamist students against those with different convictions. In this scenario, Copts were simply the weakest link and an easy target, ensuring that panic would spread and university campuses would be brought to heel under the aegis of the Islamist groups. 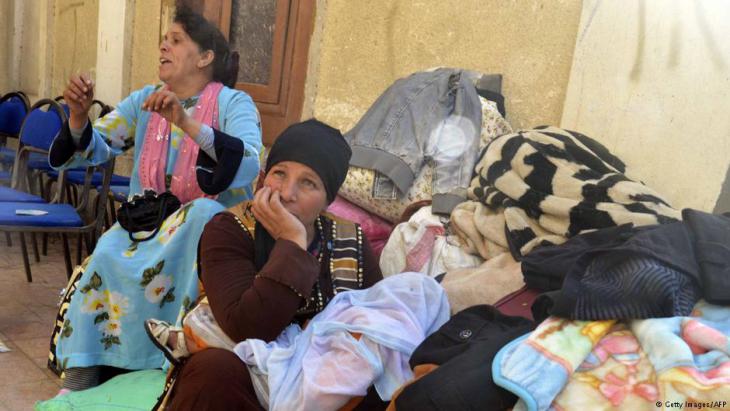 IS pursuing its own agenda: the Islamists are targeting the Copts as ″a means to hurt and embarrass the state and to portray the regime as one which is incapable of protecting its own citizens or even its own supporters. It is also a show of power and a reminder to society at large of the ability of Islamic State to cause harm, or at least to terrify its citizens,″ writes Botros

By the late 1990s, suffering ongoing strikes by the security forces, the Islamist groups had been worn down by almost two decades of protracted military confrontation. Add to this shrinking popular support and relatively successful efforts in prison in the field of re-education and repentance – and the Islamist groups were ready to abandon their 1970s′ ambition of seizing power.

At the same time, this period was accompanied by a harrowing escalation in the frequency of deadly assaults against Copts and foreign tourists, both of whom were seen as soft targets. They were seen as a means of venting anger against the state and embarrassing it. The assaults also served as a reminder of the ability of jihadist ideology and its disciples to cause harm to society; they also compensated the followers for their feelings of inadequacy and humiliation at the hands of the state security apparatus which had defeated them.

The bloody break-up of the sit-in in Rabi′a al-′Adawiya Square in August 2013 was followed by a violent and unprecedented wave of simultaneous attacks on churches, Coptic businesses and homes in different governorates. Here again, the attacks on Copts came as retaliation for the violence of the security forces and should be seen in the context of the power struggle in which the Muslim Brotherhood had so recently triumphed.

Whatever justification for those attacks on Copts might have been afforded by the Egyptian Church′s backing, if not support for the coup of 30 June 2013, Coptic participation was no more than symbolic. It did not affect the balance of forces on the ground. Hence the targeting of Copts can only be understood as a symbolic objective directed against the ″30 June″ regime.

IS terror: a different regional framework

The latest announcement by Islamic State in Egypt about the specific targeting of Copts, the continuing attacks against them in Sinai which have emptied the peninsula of Copts, the subsequent bombing of the ″Botroseya″ Church of St. Peter and St. Paul in Cairo in December 2016, the Palm Sunday bombings and the savage bus attack on 26 May 2017 have all happened in a domestic and regional context which is fundamentally different from that which existed during the violence of the 1980s.

The Islamic State in Egypt draws upon ideological references from both Iraq and Syria which have inspired it, but the background to it is quite different from Jamaat al-Islamiyya (the ″Islamic Group″) at the time of the incidents known as Ain Shams I and Ain Shams II. Nonetheless, the motives behind the targeting of Copts appear to be the same, even though they may differ outwardly.

At a time when Islamic State′s influence is being confined to a few parts of Sinai and while it realises that its ambition to expand into the Nile Valley is not practicable, its targeting of Copts cannot be understood either in the context of Islamic juridical texts calling Copts infidels or in political arguments founded on the Church′s position vis-a-vis the regime.

Rather, it is a means to hurt and embarrass the state and to portray the regime as one which is incapable of protecting its own citizens or even its own supporters. It is also a show of power and a reminder to society at large of the ability of Islamic State to cause harm, or at least to terrify its citizens without necessarily inviting their animosity.

Despite these bloody horrors, the consequences of such attacks pose less of a threat to inter-communal relationships in Egypt than the civil violence which is perpetrated against Copts via sectarian spats, be they over the construction of churches, religious conversion or personal relationships. The Egyptian state may not be directly responsible for these and other issues, but neither does it make any serious efforts to resolve them or address their roots.

Shady Lewis Botros is an Egyptian writer and psychologist based in London. He is interested in analysing the psychological structure of political discourse in the Arab world.

Abortions are illegal in Egypt unless they are necessary to save a married woman's life. But that doesn't stop local women from having one. Egyptian society needs to acknowledge ... END_OF_DOCUMENT_TOKEN_TO_BE_REPLACED

Food prices doubled, salaries halved, banks restricting withdrawals: Egyptians now have the same problems as the Lebanese. But if things get worse here, the fallout will be far ... END_OF_DOCUMENT_TOKEN_TO_BE_REPLACED

Giessen, Eichsfeld, Kusel, Berlin – cars bearing old German number plates are the latest trend on the streets of Cairo. Many Egyptians regard the discarded plates as chic. What ... END_OF_DOCUMENT_TOKEN_TO_BE_REPLACED

Egyptian Sufis have been on the defensive against the country's Islamists for decades. Meanwhile, interest in mysticism is growing among the young members of Cairo’s middle and ... END_OF_DOCUMENT_TOKEN_TO_BE_REPLACED

Chinese President Xi Jinping's visit to Saudi Arabia in December 2022 may have rattled Washington, but it simply highlighted the Arabs’ desire to diversify their foreign relations ... END_OF_DOCUMENT_TOKEN_TO_BE_REPLACED

END_OF_DOCUMENT_TOKEN_TO_BE_REPLACED
Social media
and networks
Subscribe to our
newsletter