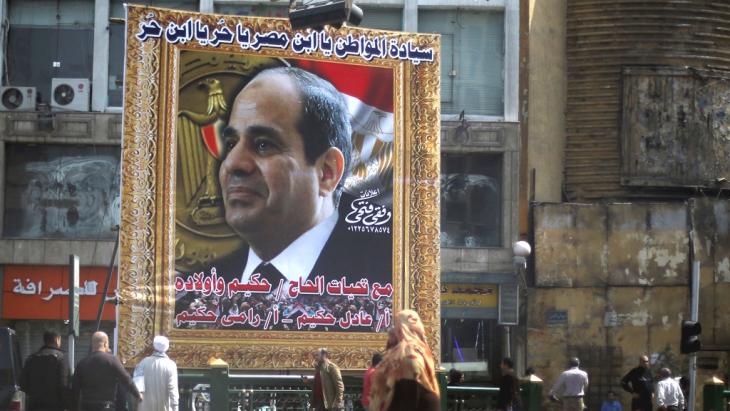 One of the reasons why there is little outcry over the repression practised by secular governments in the Arab world is that there is a lack of empathy for those who are affected by it, writes Charlotte Wiedemann

Anyone who expounds the theory that Islam has a quasi-religious genetic proximity to fascism can be sure of attracting attention, especially if the person voicing this theory comes from a Muslim background. However, as hotly as this subject is being debated in the German media at present, events such as the recent presidential election in Algeria and the upcoming presidential election in Egypt raise the very opposite question, namely when does anti-Islamism, which also goes by the name of anti-terrorism, cross the line to become fascism?

Turning the tables in this way is not a provocation for provocation's sake. What is happening in Egypt, where the Muslim Brotherhood has been denounced as totalitarian and painted as public enemy No. 1, cries out for analysis and the use of appropriate terminology. As soon as there is any mention of religiously embellished atrocities, the words used in Germany in response to these atrocities can quickly reach fever pitch. When describing secular repression in Muslim countries, however, the words strangely pack much less punch.

So what words should be used to describe Egypt's new anti-terrorism law? It is based on a definition that is unprecedented in the scope of its reach: any kind of disruption of "public order" –even the act of defacing a memorial – can constitute a terrorist act. This is an arbitrary law for a repressive military state where 16,000 people have already been detained, where journalists are paraded in court in cages for the accused, where 500 death sentences were handed down in a two-hour show trial and where the Muslim Brotherhood has seen its passive voting rights withdrawn.

Disregarding what happened in Algeria

The generals in Egypt are disregarding all the lessons taught by the Algerian trauma, which began 22 years ago when a section of the army forced elections to be stopped to prevent an Islamist victory. Today, the ailing Bouteflika, the military's man who is playing the non-speaking part of the president, looks like a character in a prolonged tragedy. The Egyptian military is even less circumspect about the way it combines its political and economic power, controlling as it does 40 per cent of the national economy; its budget secret, unaudited and tax-free. 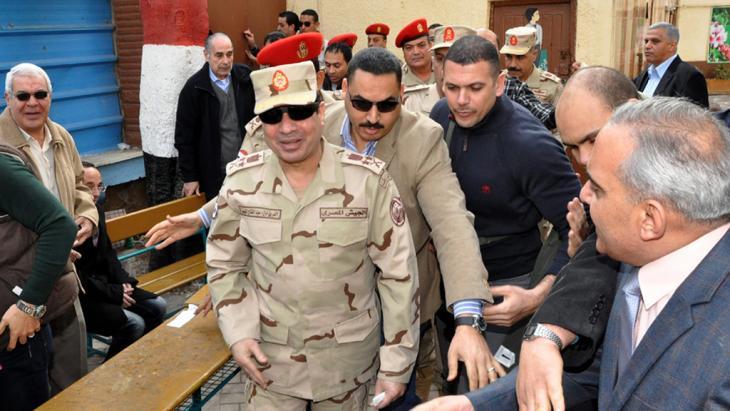 "Trivialising the terror of secular regimes was standard practice in the West before the start of the Arab revolts. Following the overthrow of Mubarak and Ben Ali, this appeared to change, but as we can see today, that change was short-lived," writes Charlotte Wiedemann. Pictured here: Egyptian presidential candidate Abdul Fattah al-Sisi (centre, front)

The cause of Egypt's descent into military autocracy is shrouded in myths. US Middle East experts Shadi Hamdi and Meredith Wheeler recently examined Mohamed Morsi's time in office using parameters that are typically used in political science to evaluate the development of transitional societies following the toppling of autocratic regimes. They came to the conclusion that by global standards, Morsi was, despite his presumption and incompetence, actually rather average; on the scale between democracy and autocracy, Morsi's Egypt was nowhere near the bottom end. The coup, say the researchers, was legitimised "by way of a fundamental misinterpretation and distortion of what had gone before".

Trivialising the terror of secular regimes was standard practice in the West before the start of the Arab revolts. Following the overthrow of Mubarak and Ben Ali, all this appeared to change. However, as we can see today, that change was short-lived.

Assad as the lesser evil

In the case of Syria, the butcher Assad is already viewed as the lesser evil. We continue to balk at the suggestion that there might be shady tactical alliances between a secular state apparatus and religiously embellished terrorism even though the emergence of "al-Qaida in the Islamic Maghreb" with personnel from the Algerian secret service has already supplied an example of this.

In a recent interview with the radio broadcaster Voice of America, which cannot be accused of playing down Islamism, a Nigerian soldier told of army commanders operating on the side of the terrorist sect Boko Haram: during one military operation, he caught sight of his former military trainers among their fighters.

It should be noted that such pieces of information do not make the very real crimes committed by Boko Haram and others any less atrocious. It does, however, raise the question of the accuracy of the picture being conveyed to us. Do the missing pieces of the puzzle perhaps conceal reasons why the campaign to crush Boko Haram is so ineffective?

The economy of public outrage uses different units of measurement depending on whether a malefactor is labelled Muslim-religious or secular. When Erdogan bans Twitter, the outcry is louder than when Assad tortures children. The argument that it is because Turkey is not only closer to us but also wants to join the European Union does not provide a convincing explanation for these differing levels of uproar. 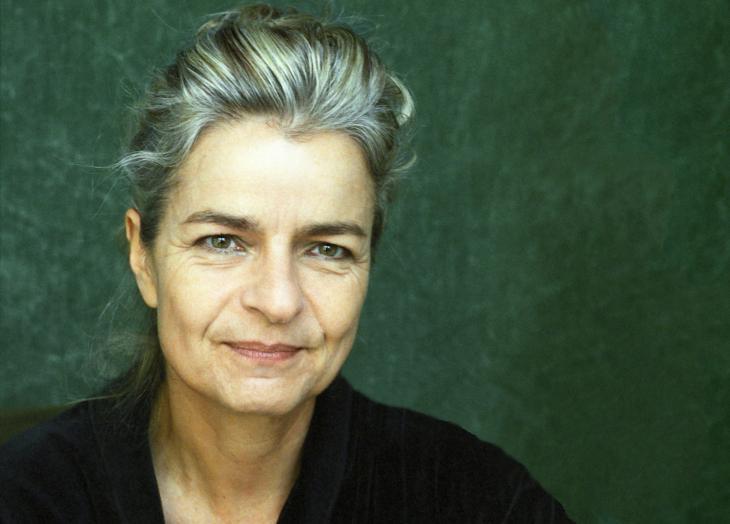 The political journalist and writer Charlotte Wiedemann lived in Malaysia for several years and has travelled extensively in numerous Islamic countries in Asia and Africa. In her work, she has among other things taken a closer look at recent societal upheaval in Tunisia, Egypt and Yemen

In the case of Iran too, which is not as close to us, victims are always afforded higher levels of sympathy because they are the victims of an Islamic regime, even if the executed man was a drug dealer.

Lack of empathy for the Muslim Brotherhood

The lack of empathy for victims is one of the reasons why secular repression is so chronically underestimated. The words "Muslim Brotherhood" alone are enough to block empathy. Moreover, regimes like this are calculable partners of the West – just as they were before the Arab Spring. US Secretary of State Kerry has just spent a considerable amount of time in Algeria, the favoured assistant in the fight against terrorism in the region.

There is, however, one new aspect: the idea that Islamism is today's public enemy no. 1 is making inroads into both the western and the Arab left wing. It is crippling solidarity with the Syrian revolution, feeding into an incorrect reading of the events in Egypt and causing polarisation in Tunisia. Perhaps this is a kind of misguided internationalism.

But even Egypt and Tunisia – both post-revolutionary societies – are divided by more than unites them. This applies to both the level of religiousness in society and the character of the Islamist protagonists. With the disaster that befell the Muslim Brotherhood in mind, Tunisia's Ennahda relinquished power.

In Algeria, the three most important Islamist parties and members of the secular opposition boycotted the election. All over the world, from Indonesia to the Crimea, political Islam is pursuing quite different paths depending on the nation in question. This is why all the fashionable theories about its rise or fall have, at some point, shown themselves to be ill-founded.

Tourists have been returning to Tunisia, Egypt and Morocco. But, given the global uncertainty caused by the Ukraine war, will the comeback be enough to save a struggling sector, ... END_OF_DOCUMENT_TOKEN_TO_BE_REPLACED

In this essay, renowned Lebanese journalist and writer Hazem Saghieh asks whether the Arab Levant, which stretches from Iraq in the east to Egypt in the west, will remain an ... END_OF_DOCUMENT_TOKEN_TO_BE_REPLACED

By 2050, the Middle East and North Africa could be dealing with many more elderly people suffering from dementia. A lack of facilities, specialists and local knowledge means the ... END_OF_DOCUMENT_TOKEN_TO_BE_REPLACED

With his fist bump greeting for a man he previously called a pariah, US President Biden has paved the way for Saudi Crown Prince Mohammed bin Salman's return to the international ... END_OF_DOCUMENT_TOKEN_TO_BE_REPLACED

Comments for this article: On Islam, anti-terrorism and fascism

Who witnessed the masses of people in Cairo, Alexandria and other Egyptian cities protesting against the political failures of former president Morsi and his parliament can not assume that the uprising was mainly driven by military forces behind the scenes. It's a fact that unfortunately people became desperate and tired especially about the economical situation and trapped into the illusion that the military is the solution and seem to have forgotten the atrocities committed by parts within the army between the ouster of Mubarrak and the election of president Morsi. Nevertheless, demanding appropriate terminology should also mean to question the term "coup" for the uproar which let to the withdraw of Morsi.

The real hand behind all this chaos in Islamic countries, if allowed to carry on with their policies by the puppet regimes, having no love for Islam as their paid agents, we can not look into the real picture. What is worth the concern is the drama being replayed now in Pakistan repeating what happened in Egypt after decades of dictatorship. Why this HIDDEN HAND is doing all this might be found in the books like "The Clash of Civilizations" and latest book The Geopolitics of Emotion: How Cultures of Fear, Humiliation, and Hope Are Reshaping the World by Dominique Moisi, a professor at Harvard. Why there is a talk of Egyptian drama to be played in Pakistan is far simpler than what has been discussed here & in these books? A plethora of withdrawing army from Afghanistan has to safely pass through the soil & skies of Pakistan; does it not explain the causes of chaos else where in Islamic states as well. Every where this HIDDEN HAND has some interest if not visible, is only because of our short sightedness. Besides most of the analysts are either too afraid of unveiling the HIDDEN HAND or are being manipulated, mentally or economically. If we have love for #Humanity we ardently need some intellectuals, think tanks not only towing the boats of their masters but having the audacity and sagacity to come up with candid analysis of the situation like this but giving out some solid solutions as well. Blowing the whistle alone will not save the mankind but showing them the shelters too is the responsibility of the intellectuals.

END_OF_DOCUMENT_TOKEN_TO_BE_REPLACED
Social media
and networks
Subscribe to our
newsletter