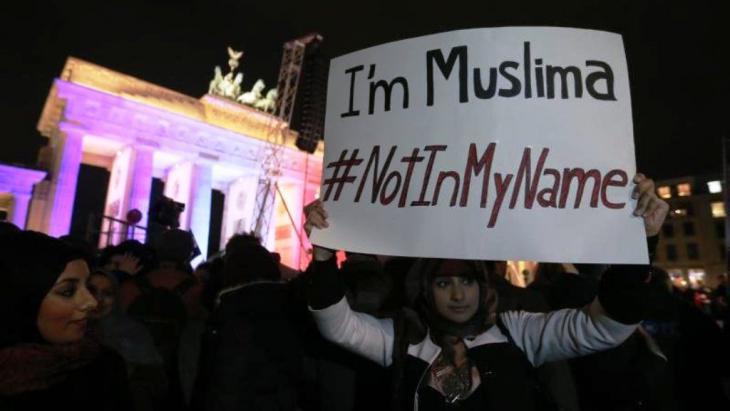 Terrorism debate
The distortion of Islam

Why do terrorists such as those involved in the Paris attacks cite Islam as their motivation? Their actions have nothing in common with what most Muslims believe. By Daniel Bax

As always following attacks with an Islamist motivation, Muslims insist that such terror has "nothing to do with Islam". German Interior Minister Thomas de Maiziere has also appropriated this formulation. This is understandable, as terror has nothing in common with the kind of Islam practised by the overwhelming majority of Muslims in Europe in particular. But at the same time, there is a growing sense of mistrust towards Islam in Europe, because terrorists such as those in France are now citing the faith as their motivation. How can this contradiction be explained?

Or to put the question another way: what is it about contemporary Islam that makes it so susceptible to exploitation by violent criminals? Other religions are also being misused – Judaism by radical settlers in the Middle East, Christianity by murderous anti-abortionists in the US, and Buddhism by monks that persecute Muslims in Myanmar. But only radical Islam is apparently such an attractive prospect to young men on the peripheries of society that some are even motivated to join the civil war in Syria or carry out attacks in the countries of their birth, as was the case recently in Paris. Why?

Historically speaking, this development is astonishing, because up until the late Middle Ages, chiefly Muslim Arab societies were much more sophisticated than Europe in terms of tolerance, culture and scientific scholarship. Muslim intellectuals and political leaders found two responses to the crisis triggered by the military and cultural boom in Europe and its colonisation of predominantly Muslim nations.

One response saw only the radical absorption of European models – nationalism, socialism, secularism – as a path to salvation. Other voices, initially speaking much more quietly, called for a return to Islam as a way of finding a route back to former strength. 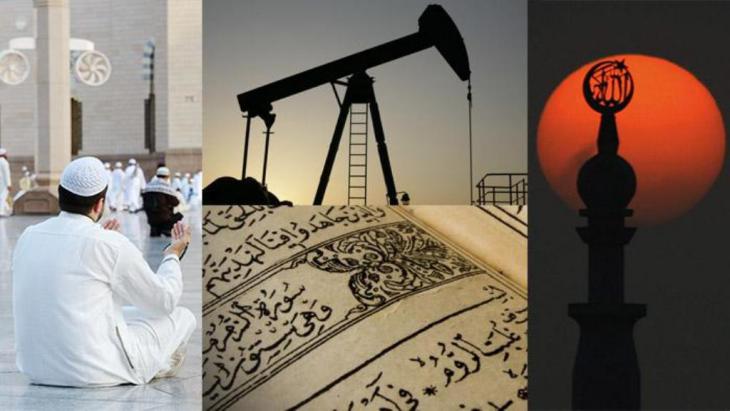 Wahhabism is considered by many to be a motivating force behind radical Islam around the world: "The Saudi version of Islam with its strict segregation of the sexes, intolerance of those who hold different beliefs and archaic corporal punishments, is extreme," writes Daniel Bax

A puritanical interpretation of Islam

Only the failure of the region's secular regimes to bring prosperity, participation and justice to their citizens put wind in the sails of Islamist movements, which couched anti-imperialist rhetoric in religious terminology and presented themselves as an alternative. The more violently they were repressed, the more radical some of them became.

In addition to this, arch conservative Saudi Arabia, a nation able to establish itself as today's most important Arab regional power in the Middle East through almost inexhaustible oil reserves that have brought it immense wealth, has in the meantime exported its puritanical interpretation of Islam all over the world.

The Saudi version of Islam with its strict segregation of the sexes, intolerance of those who hold different beliefs and archaic corporal punishments, is extreme. Although it may appear medieval, it actually represents a relatively modern school of thought founded in the eighteenth century by the scholar Muhammad ibn Abd al-Wahhab, and elevated to the official religion of the Kingdom of Saudi Arabia in the twentieth century, which is why this variety of Islam is also termed Wahhabism (or Salafism).

This austere Saudi brand of Islam was initially perceived as an alien phenomenon in other predominantly Muslim societies. But in recent decades, this Salafism with its insistence on the full-body veil, its strict reading of the Koran and its rejection of traditional popular piety, has been successfully established on a global level and gained a terrorist dimension that finds its most extreme expression in the ideology of Afghanistan's Taliban, the militia of Islamic State or Boko Haram in Nigeria.

Concurrently, western interventions such as most recently in Iraq and Libya have further accelerated the dissolution of Middle Eastern states along religious-ethnic lines. Salafist terror groups are now leaping in to fill this vacuum. 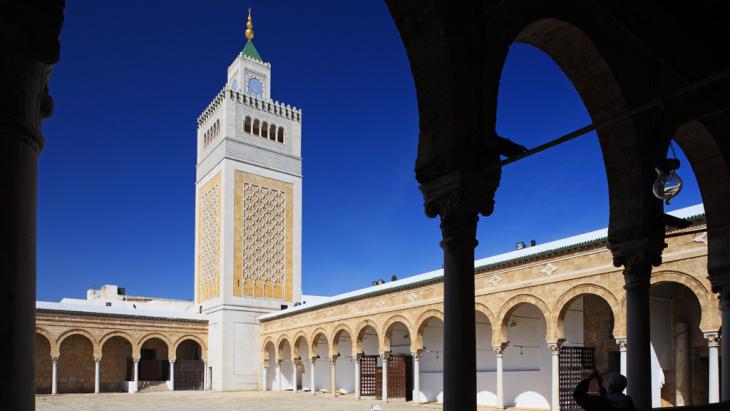 In addition to Al-Azhar University in Cairo, Ez-Zitouna in Tunis is one of the most important places of learning in Islam and is famed not only for its moderate orientation and for its famous alumni such as the Arab historian Ibn Khaldoun. "To view this do-it-yourself-Islam as an authentic expression of this religion or even as an inevitably correct interpretation of the Koran, you have to ignore several centuries of Muslim theology and religious practice," writes Daniel Bax

Attractive to those with broken lives

There are several thousand Salafists in contemporary Germany, although only a minority of them are thought to be ready to use violence. Nevertheless, these people pose a particular risk – especially when they return from the Syrian civil war. It is noticeable that just as in the case of the Paris attacks, they are often former small-time criminals and others who have failed to find their place in society. They take Islamic concepts such as "jihad", rob them of their original meaning and reinterpret them in order to justify and exaggerate their actions.

To view this do-it-yourself-Islam as an authentic expression of this religion or even as an inevitably correct interpretation of the Koran, you have to ignore several centuries of Muslim theology and religious practice – which is exactly what the terrorists are doing, but also many over-enthusiastic "critics of Islam", who randomly select passages of the Koran to place the entire religion under general suspicion.

In Islam there is no Church that could excommunicate such terrorists, and Muslims are reluctant to declare them "infidels", because this is exactly what the terrorists do to declare their opponents fair game. But all key Muslim authorities, including the Saudi authority and all Islamic associations in Europe have unanimously condemned the Paris terror attacks and criticised the misuse of their faith, this distortion of their religion.

This is because these terrorists pose a threat to the coherence of the societies they attack – especially for persecuted minorities such as the Christians in the Middle East or the Jews in Europe, but also for everyone else. Their assertion that they are acting in the name of Islam is made all the more absurd by the fact that most of the victims of Islamist terror are themselves Muslims.

What politics in Europe must do – apart from implementing the necessary security policy measures – is to press ahead with the integration of Islam in Europe, as a way of bolstering peaceful Muslims and to repeatedly make it clear that the frontline does not run between western societies and Muslims, but between democrats and terrorists.

Daniel Bax
© Qantara.de 2015
Daniel Bax is Home Editor at the "taz" newspaper. His specialist issues include integration and migration, state and religion, minorities and racism, Turkey and the Middle East, as well as music and popular culture.

Home
Print
Newsletter
More on this topic
On Raif Badawi, Charlie Hebdo and non-violent Islamism: "We are all in this together, like it or not"Interview with the French imam Djelloul Seddiki: "Extremist groups want to impose on us a clash of civilisations"Muslims and the Paris attacks: "I distance myself from these murderers – not as a Muslim, but as a human being"Reactions to the Paris attacks: Religiousness is not the problemGerman jihadists: Turning their backs on the WestSalafists in Germany: A simple world view and the promise of paradise
Related Topics
Boko Haram, Charlie Hebdo, Colonialism, Criticism of Islam, Front National, History of the Near and Middle East, International terrorism, Jihadism | Jihadists, Muslims in the West, Radicalisation, Salafis | Salafism, Taliban, Wahhabism
All Topics

Since Ali Khamenei, Iran's most powerful man, has openly and unconditionally come out in support of Putin's war in Ukraine, logistical help is on its way, with an allegedly ... END_OF_DOCUMENT_TOKEN_TO_BE_REPLACED

Tourists have been returning to Tunisia, Egypt and Morocco. But, given the global uncertainty caused by the Ukraine war, will the comeback be enough to save a struggling sector, ... END_OF_DOCUMENT_TOKEN_TO_BE_REPLACED

The highly controversial Indian blockbuster "The Kashmir Files“, on the exodus of Kashmiri Hindus in the 1990s, is characterised by unilateral representations, negative ... END_OF_DOCUMENT_TOKEN_TO_BE_REPLACED

"Flugt" is the world's first museum dedicated to the stories of those forced to flee. The new museum, which focuses on the fates of refugees then and now, is housed in a former ... END_OF_DOCUMENT_TOKEN_TO_BE_REPLACED
Author:
Daniel Bax
Date:
Mail:
Send via mail

END_OF_DOCUMENT_TOKEN_TO_BE_REPLACED
Social media
and networks
Subscribe to our
newsletter