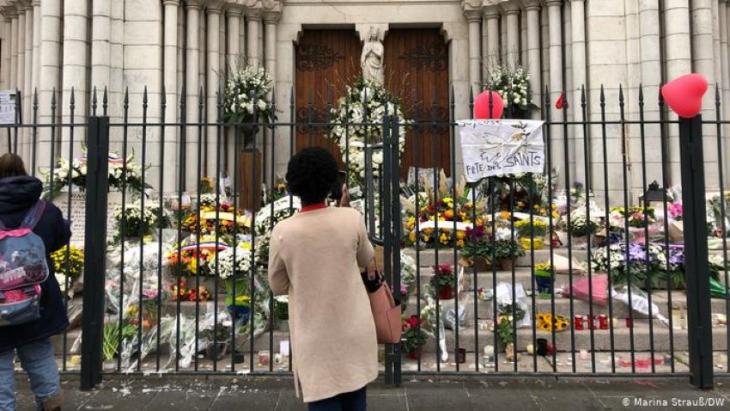 Muslims in Nice condemn the attack on the Basilica of Notre Dame. At the same time, there is great frustration at the readiness of some to equate the perpetrator with the Muslim community in general, which mourns the attack as much as the rest of France. By Marina Strauß

"Black or with sugar?" asks Khalid and disappears around the corner. With coffees for the DW team in hand, he joins his friends Hassan and Mouhcine on the pavement again.

All three have Moroccan roots, are Muslim and have been living here in the L'Ariane district in eastern Nice for several years. Many who live here - themselves, their parents or grandparents - immigrated to France from North Africa.

"Terrible. Everyone here thinks it is terrible," says Khalid when asked about the attack. Last Thursday morning, a 21-year-old Tunisian murdered three people in the Basilica of Notre Dame in the centre of Nice. Khalid says he knew one of them, the sexton of the church. "We sometimes had coffee together across the street from Notre Dame."

"I don't always want to have to justify myself"

After a few minutes, Karim arrives on his white scooter and brakes sharply: "You are journalists?" Everyone here is sad about the attack, he says. But he is annoyed that many media, especially TV stations, make no distinction between the perpetrator and Muslims. Not only this time, but always after an Islamist attack. "I don't always want to have to justify myself, although I have nothing to do with it," says Karim, who, like the other men, prefers to keep his surname to himself. 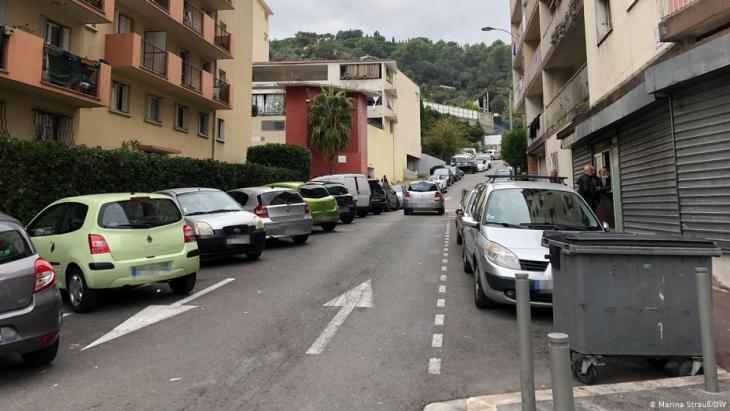 "We are French": the five men on the street corner in L'Ariane were offended by Macron's remarks. They respect the rule of law, work and pay taxes, they say. Their parents, their grandparents had come to France or had been brought by the French state to rebuild the country after the wars. Now they feel they are no longer welcome here

The French president is likely to add fuel to the fire, they say. Emmanuel Macron defended Muhammad cartoons as a sign of freedom of expression after the decapitation of teacher Samuel Paty in mid-October. A reaction that triggered strong protests in parts of the Muslim world.

Indeed, for the five men in L'Ariane, cartoons that hurt the feelings of groups - be they Muslims, Christians or Jews - remain unacceptable.

A few streets away, Nedjma Benabed is pulling a shopping trolley behind her. Born in Algeria, she has lived in France for 35 years and describes herself as a devout Muslim. She says she doesn't care about the cartoons. No one knows what the Prophet Muhammad looked like anyway. "But it offends some people. So why can't we just let it be?"

She has more time for President Macron than the five men: "I agree with him. We must do something." For example: "People who come here illegally must be sent back."

Macron: France has a problem with radical Islam

Our conversations in L'Ariane reveal how difficult it is to find answers: to the alleged Islamist attack in Nice and to those that preceded it. How can such excesses of violence be prevented, what can be done to prevent members of the Muslim community from radicalising themselves? And at the same time ensure that Muslims are not exposed to general suspicion? 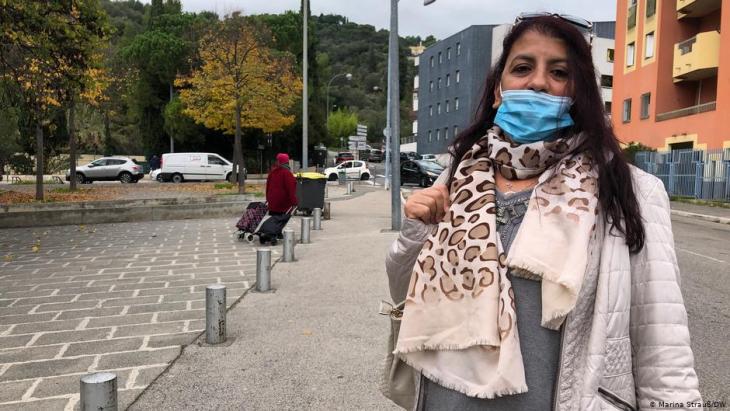 Taking a pragmatic approach: born in Algeria, Nedjma Benabed has lived in France for 35 years and describes herself as a devout Muslim. She says she doesn't care about the cartoons. No one knows what the Prophet Muhammad looked like anyway. "But it offends some people. So why can't we just let it be?"

The president's answer to that is a plan against "Islamist separatism", which he presented in early October. France has a problem with radical Islam, Macron announced at the time. And this problem should now be tackled with more control over education, mosques and associations.

According to Macron, political Islam in France undermines laicism, i.e. the strict separation of religion and state. In a September survey conducted by Ifop, an opinion research institute, 40 % of French Muslims - the second largest religious community in France - said they put their faith above the values of the republic. For the French as a whole, this figure was 17 percent.

Emmanuel Macron's speech did not go far enough for the right, while left-wing political forces saw it as a general stigmatisation of Islam. Many Muslims were angry about one thing in particular: That the French president attested that Islam was in crisis "all over the world".

The five men on the street corner in L'Ariane were offended by his remarks. They respect the rule of law, work and pay taxes, they say. Their parents, their grandparents had come to France or had been brought by the French state to rebuild the country after the wars. Now they feel they are no longer welcome here. "We are French," says Mohammed with the baguettes under his arm.

Using a graphic novel to address a contentious issue like the Algerian war of independence may seem an odd choice, but new release "Algeriennes", translated into English by Ivanka ... END_OF_DOCUMENT_TOKEN_TO_BE_REPLACED

Although a unity government was formed in Libya in March 2021, tensions and possible crises between the political actors are already emerging. What problems does the country face ... END_OF_DOCUMENT_TOKEN_TO_BE_REPLACED

India hits record numbers of COVID-19 infections worldwide for the sixth day running, as health systems buckle under the pressure, and shortages of medical oxygen and hospital ... END_OF_DOCUMENT_TOKEN_TO_BE_REPLACED

On 7 March, Switzerland became the latest European country to vote in favour of a so-called "burka" ban. It was yet another feather in the cap of the right-wing populist Swiss ... END_OF_DOCUMENT_TOKEN_TO_BE_REPLACED

German Middle East analyst Guido Steinberg and television journalist Ulrich Tilgner have both published new books on the conflicts in the Middle East. Their analyses and their ... END_OF_DOCUMENT_TOKEN_TO_BE_REPLACED

In Grenoble, France, two professors have been pilloried in a dispute over the use – or otherwise – of the term Islamophobia. Is freedom of speech in jeopardy? By Stefan Dege and ... END_OF_DOCUMENT_TOKEN_TO_BE_REPLACED
Author:
Marina Strauß
Date:
Mail:
Send via mail

END_OF_DOCUMENT_TOKEN_TO_BE_REPLACED
Social media
and networks
Subscribe to our
newsletter