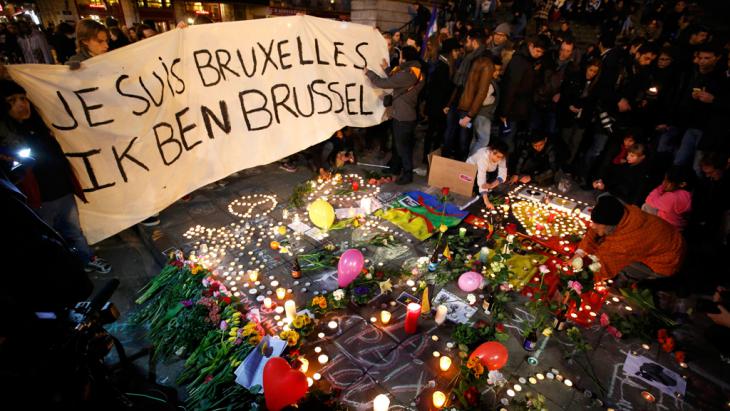 Terrorist attacks in Brussels
A clash of what?

Culture, religion – or merely politics? Recent terrorist attacks against another European capital city in less than a year have once again shaken world politics to the core. Are we playing into the hands of Daesh? By Hakim Khatib

As we might expect, the blasts in Brussels have generated international outrage and sorrow, similar to the outpourings of grief which followed the tragic attack on Charlie Hebdo in January 2015 and the sickening terrorist operation in Paris last November.

Widespread condemnation and calls for solidarity are also likely to be voiced by a spectrum of Muslim dignitaries in and outside Europe and by world political leaders, including Arab ones.

Although some of the victims of the attacks at Brussels airport and the Metro station may well have been Muslims, this doesn′t change the fact that Daesh-affiliated madmen call themselves Muslims as well. This is going to be one of the leading arguments for the far-right populists in Europe, who are more likely to shift the debate towards issues of failed integration, a clash of cultures, threats against European ″Christian″ values, the Islamisation of Europe etc. In other words, we can expect to see a culturalisation of the discourses surrounding the terrorist crisis in Europe and the world over.

It is also more likely that, in order to enforce security, Western states will redouble their military response to Islamic State, as if it were the sole reason for such attacks. In short, rifts in European societies due to mutual alienation and victimisation, increased security measures, the rise of far-right voices and the adherence to established, yet ultimately unsuccessful military approaches to combating terrorism are going to set the tone over the next few weeks and probably months. Daesh is baiting the whole world with its random attacks – and it seems to be working. 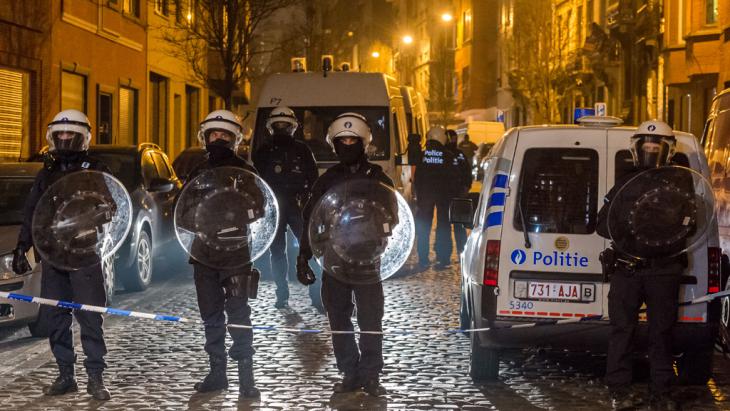 ″Instead of looking at ethno-national cultures and religions as identity fault lines, there is an urgent need to understand them as politically embedded and historically mutable phenomena,″ explains Kira Kosnick, a professor at the Institute of Sociology at the Goethe University of Frankfurt

The culturalisation of discourse

The culture of the perpetrators frequently forms the focus in the search for evidence and explanations. Culturalisation dominates public debate on such issues, despite the fact that recent terrorist attacks in Europe were committed by individuals born and raised in the West.

When the culturalisation of discourse is deemed too general, religion, which is more often used interchangeably with culture, comes into play. Again discussions surrounding the Brussels attacks are likely to become islamised, addressing issues of Islamism, integration, conflicting values etc. On the one hand, the role of culture and religion must not become marginalised; on the other, too much emphasis on either is counterproductive when it comes to analysing political, economic and military power relations.

In theory, the growing tendency of people to make inferences about others′ disposition, traits and characteristics on the basis of what they have observed of their actions correlates with the escalation of contentious practices. In other words, by observing the behaviour of out-group members, we tend to draw hasty conclusions about others′ characteristics and derive explanations for their behaviour. Yet, this is an ″error of perception″ and not sophisticated enough to produce a satisfying explanation.

In practice, perceptual errors lead us to develop discourses based on the general tendency to explain behaviour of in-group members by looking at causes in the environment and context, but for the out-group members in their traits themselves. 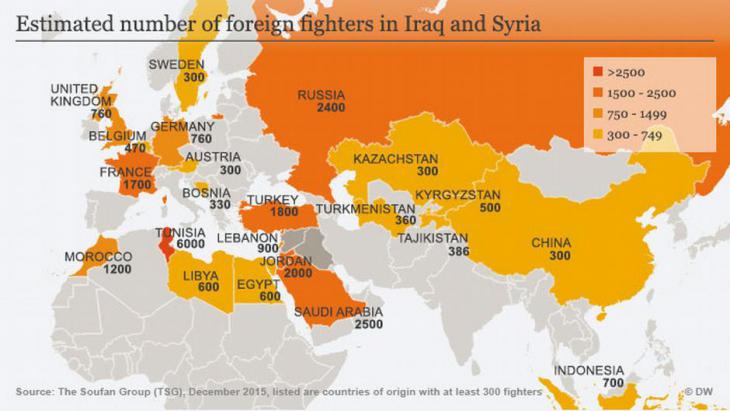 "Radicalisation is a process that takes several years to crystallise. There is little evidence to suggest that people become radicalised because of a three-month visit to Daesh. Yet there are clear indications that those who join Daesh are already prepared to embrace, learn and instigate such an extremist ideology," writes Khatib

The culturalisation of discourse, accompanied by a lack of proper knowledge, paves the way for burgeoning generalisation and stereotyping aimed at the collective other.

″Instead of looking at ethno-national cultures and religions as identity fault lines, there is an urgent need to understand them as politically embedded and historically mutable phenomena,″ explains Kira Kosnick, a professor at the Institute of Sociology at the Goethe University of Frankfurt.

Injustice, corruption and chaos in the world offer the perfect breeding ground for terrorism. Terrorism can only be tackled effectively when Western and Muslim-majority countries acknowledge that the problem mainly lies in religious and political governance. Every time such a criminal action happens, Muslim individuals become the first victims not only in the Western world but also across the region of West Asia and North Africa such as in Iraq, Syria and Yemen. But why is it a controversy of denial and why does it serve Daesh?

At one level of denial, some Islamic clerics incite violence and then go on to condemn those who carry out violent acts. At a second level of denial, Arab political leaders support the freedom of speech that defies terrorism and extremism in the West, yet they choose to do otherwise in their own countries. At a third level of denial, Western countries base their relationship with states across the Middle East and North Africa on security, stability and economic calculations, turning a blind eye to all the violations and atrocities perpetrated by their authoritarian allies. At a fourth level of denial, while the West has adopted an unclear stance concerning protracted conflicts at the heart of Muslim-majority countries, it has built strong ties with states known to export extremism and sectarianism, such as Saudi Arabia and Iran.

This controversy emerges when actors are unable or unwilling to improve people′s lives in the region. Consequently, extremist groups find a fertile environment for recruitment in these structures.

Solutions in the age of Daesh

Solutions to reform Islamic thinking necessitate the willingness of political as well as religious leaderships to stop instrumentalising religion whenever it deems convenient. 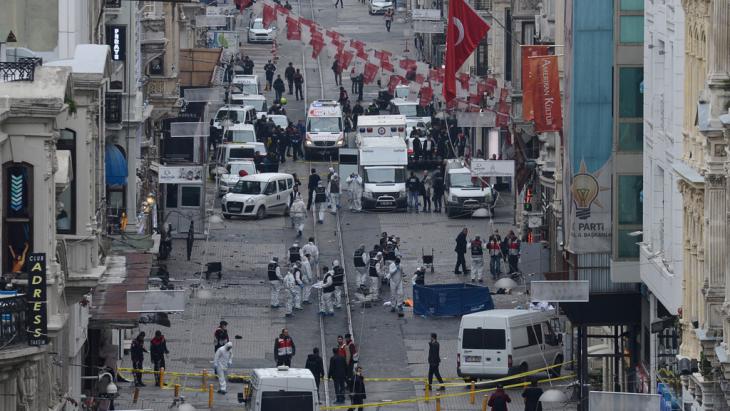 It is worth noting that such attacks are not confined to European states, but are also affecting other countries, most notably Turkey and Indonesia. On 19 March 2016 a terrorist attack on Istanbul's main shopping boulevard, Istiklal Kaddesi, killed four people and injured 39

The problem is not that some terrorists joined or learned from Daesh, but rather why they were inclined to join and support Daesh – or even al-Qaida – in the first place. Radicalisation is a process that takes several years to crystallise. There is little evidence to suggest that people become radicalised because of a three-month visit to Daesh. Yet there are clear indications that those who join Daesh are already prepared to embrace, learn and instigate such an extremist ideology.

The newcomers to Daesh or any other terrorist organisation are more likely to have developed their radical views in their home countries. It could be at school, in the home, from religious books, Islamic interpretations or religious sessions. The reasons behind an incitement to violence could therefore lie in the books held most sacred by Muslims.

We all know that attacks such as the ones in Brussels and elsewhere in the world are not going to break the states in question. Yet, there are consequences to these attacks. They deepen the rifts between Muslims and non-Muslims in Western societies, despite the fact that the overwhelming majority of Muslims in the West would be willing to engage in serious co-operation to eliminate any risks to their home countries.

Increasing alienation helps Daesh to recruit the most marginalised and distressed individuals. Against this background, Daesh offers them the illusion of being a part of a greater project in the name of God.

The government in the Netherlands, one of the last European nations to abolish slavery, has made an historic apology. But some feel that there is still a long way to go. By Ella ... END_OF_DOCUMENT_TOKEN_TO_BE_REPLACED

The European Union's top court has deemed kosher and halal slaughter incompatible with animal welfare. This is a grim day for religious freedom in Europe, writes Christoph Strack END_OF_DOCUMENT_TOKEN_TO_BE_REPLACED

One year after the burka ban in the Netherlands, Muslim women are reporting increased discrimination and violence. Adding to the frustration, face masks against coronavirus have ... END_OF_DOCUMENT_TOKEN_TO_BE_REPLACED

At the Goethe-Institutʹs Tashweesh Festival, artists and intellectuals from North Africa, Europe and the Middle East meet to discuss stereotypical gender images. By Caren ... END_OF_DOCUMENT_TOKEN_TO_BE_REPLACED

Belgium has been fighting religious radicalisation since it became painfully obvious that Islamists were operating in the country. Art and humour have become tools in the battle ... END_OF_DOCUMENT_TOKEN_TO_BE_REPLACED

In contrast to other cities in Belgium, violent Islamists have found next to no adherents in Mechelen. This is primarily due to the efforts of Mayor Bart Somers: he demands that ... END_OF_DOCUMENT_TOKEN_TO_BE_REPLACED
Author:
Hakim Khatib
Date:
Mail:
Send via mail

END_OF_DOCUMENT_TOKEN_TO_BE_REPLACED
Social media
and networks
Subscribe to our
newsletter